The next theme in the Historical Sew Fortnightly Challenge is for undergarments. I am going to continue with the 1780s/ early 90s, so that I'll have something to wear my fichu with. I've started making a pair of stays, which are about half finished. The pattern is from The Cut of Women's Clothes 1600-1930. If this were any other book I would have taken a crappy photo from a weird angle to show you the page that the pattern is on, but the copyright statement is unusually thorough, so just to be safe here is a sketch I drew that looks like the line diagram.

And here are my scaled up pattern pieces.


The book says they are from the 1790s, I'm guessing they're from the early 1790's judging by these fashion plates, pretty much everything past 1794 has an empire waistline. This means that I'll be using them for late 1780's too, there doesn't seem to be much difference in the shape. The book also says they're from the Victoria and Albert Museum, but the closest thing I could find in their collections was these. They are certainly not the stays in the book.

The pattern didn't fit me when I scaled it up to the measurements in the book, which shouldn't have come as a surprise seeing as these stays belonged to an 18th century woman, and they were rather small by today's standards. I used another bodice pattern to make it fit, it's based on my other stays. Since it's all one piece it's not really meant to be used as a pattern itself, I only use it to make other patterns.


The pattern fits now, but enough about the pattern, here is the fabric.

And the lining.
The purple cotton was already in my stash. The blue cotton is leftover from a petticoat that I made from an old sheet, one end of the sheet was bound with a very wide strip of fabric with a flowery border print.
The interlining is canvas(from the stash) and the bias binding will be bright yellow cotton(purchased but not photographed).

The stays still need bones, eyelets and bias tape. I also have to attach the front of the straps, But I won't do that until the boning and eyelets are done, it's easier to work on stays while they can still lie flat.
The challenge isn't due until February 11th so I'm going to keep sewing 1780s/early 90s undergarments until then. I'm planning to make a bum pillow, some petticoats and maybe a new shift.
Posted by Vincent Briggs at 08:59 7 comments:

Hello again! I've just finished making a fichu. This brings the total number of historical garments I own to 4, not very many at all, which is why I'm participating in the Historical Sew Fortnightly challenge. I missed the first challenge, so this fichu is for #2, the UFO challenge. It was the only unfinished object I had that was historical, not counting the pockets and quilted petticoat, which are long running projects. I started this several months ago, but only finished one edge and then forgot about it. It's a very simple project, just 2 triangles of gauzy fabric sewn together to make a bigger triangle. Here are the pictures.


It was pretty easy to sew, I don't know why I put it off for so long. Here are some pictures of me wearing it with my somewhat itchy shift and rather awful stays.

It might be long enough to wear in the style shown in this fashion plate, but I didn't think of it at the time.
The facts:

The challenge: # 2, the UFO challenge.

Fabric: An odd shaped piece of fine cotton from my mothers stash, It was approximately 1m.

Pattern: No pattern, I just cut the biggest square I could from the fabric, cut it diagonally and sewed the two pieces together.

Notions: Just some poly cotton thread, does thread count as a notion?

How historically accurate is it? The materials are not accurate, but it's completely hand sewn, which is accurate. I'm not sure about the construction.

Hours to complete: I didn't keep track of the time, but I'm guessing maybe 4 or 5.

First worn: January 18th, 2013. But only for a few minutes, to sit in front of a camera with an auto timer in my cramped little sewing corner. I can't wear it out yet because I have no historical outerwear.

Note about terminology: Update: Nope, it is neither a fichu nor a handkerchief, but a buffon.
Hallie Larkin has done an amazing amount of research and written quite a few posts on handkerchiefs, she says that fichu is a French word and the English didn't use it in the 18th century. I am going to continue calling mine a fichu though.

I would like to say thank you to The Dreamstress for starting this wonderful challenge, two weeks is an excellent time frame, and having a deadline really helps get things done.
Posted by Vincent Briggs at 13:01 7 comments:

This is the first post ever on my sewing blog!  I'm 18 years old and I learned how to sew in 2011, I'm really interested in historical costuming. I didn't think that this blog should be sitting there with no posts, so here is a post about a project that I'm working on right now.
I am making my own version of these embroidered pockets from the Met. They're the kind of pockets that tied around the waist and were reached through a slit in the skirt.

Aren't they delightful?  I'm fairly certain that they were cut from a larger piece of embroidered fabric, since the strawberry vines obviously have no clue where the edges of the pocket are, and the left pocket is different from the right. Typical 18th century pockets look like this.

The Met was thoughtful enough to include a measurement, 38.7 cm high. So I drew the design for each pocket on some old computer paper, as accurately as I could, with the exception of the random little bit of vine that appeared to be growing out of a leaf on the top of the pocket on the right.

I traced the design onto a piece of linen (I didn't have any white silk satin) with carbon paper and started embroidering. That was on September 19th 2012 and the first pocket is half done now. 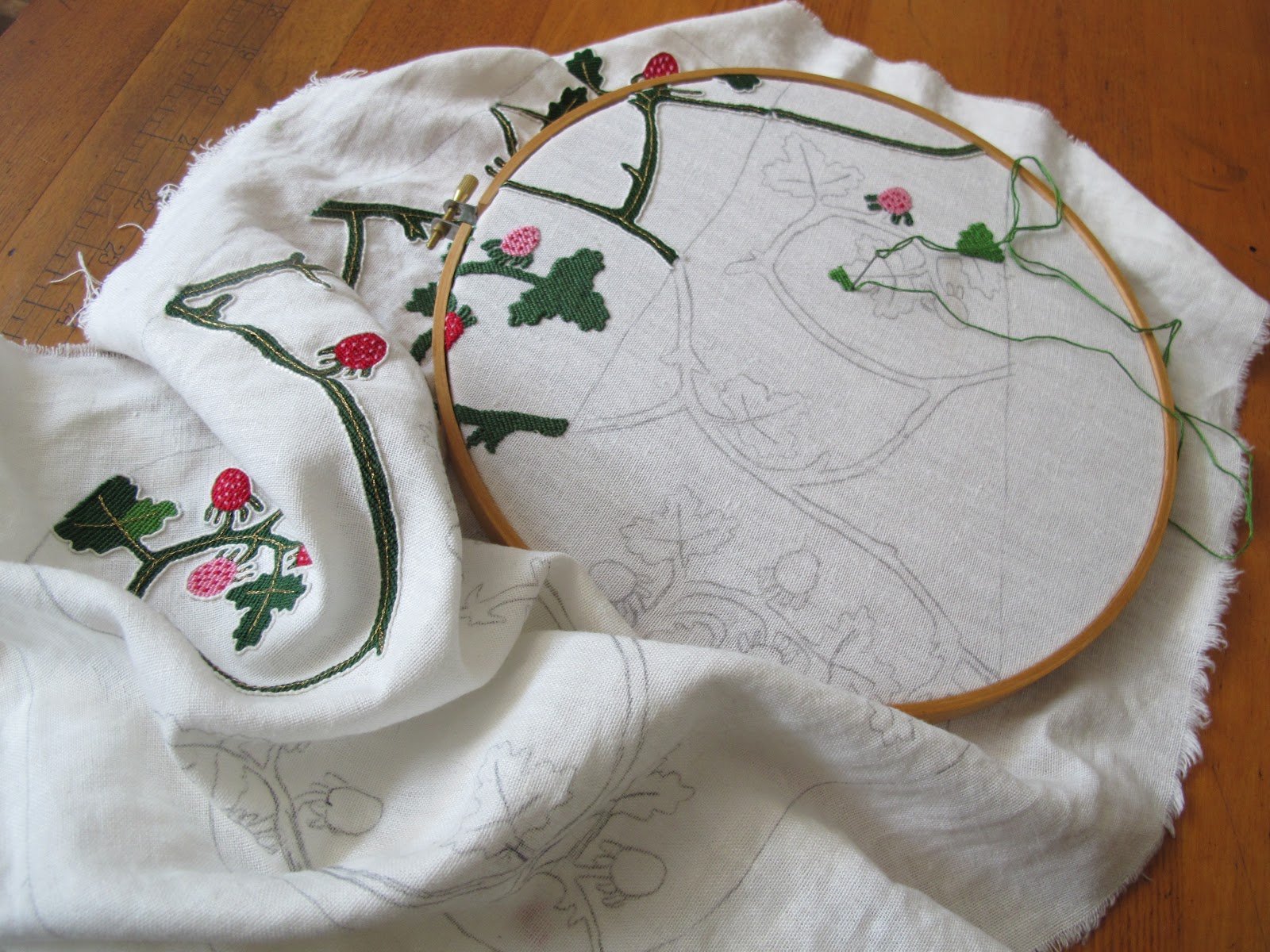 The carbon paper is working quite well, the hoop doesn't seem to smudge it or wear it off at all. I'm using cotton embroidery floss split in half. The linen has a rather open weave, which allows me to count the holes in a needle point sort of way. There is a chain stitch in metallic gold thread running up the middle of the stems and it's all outlined with a couched white cord. I wasn't sure why the vines on the original were outlined, but once I started sewing it on I saw what a difference it makes. 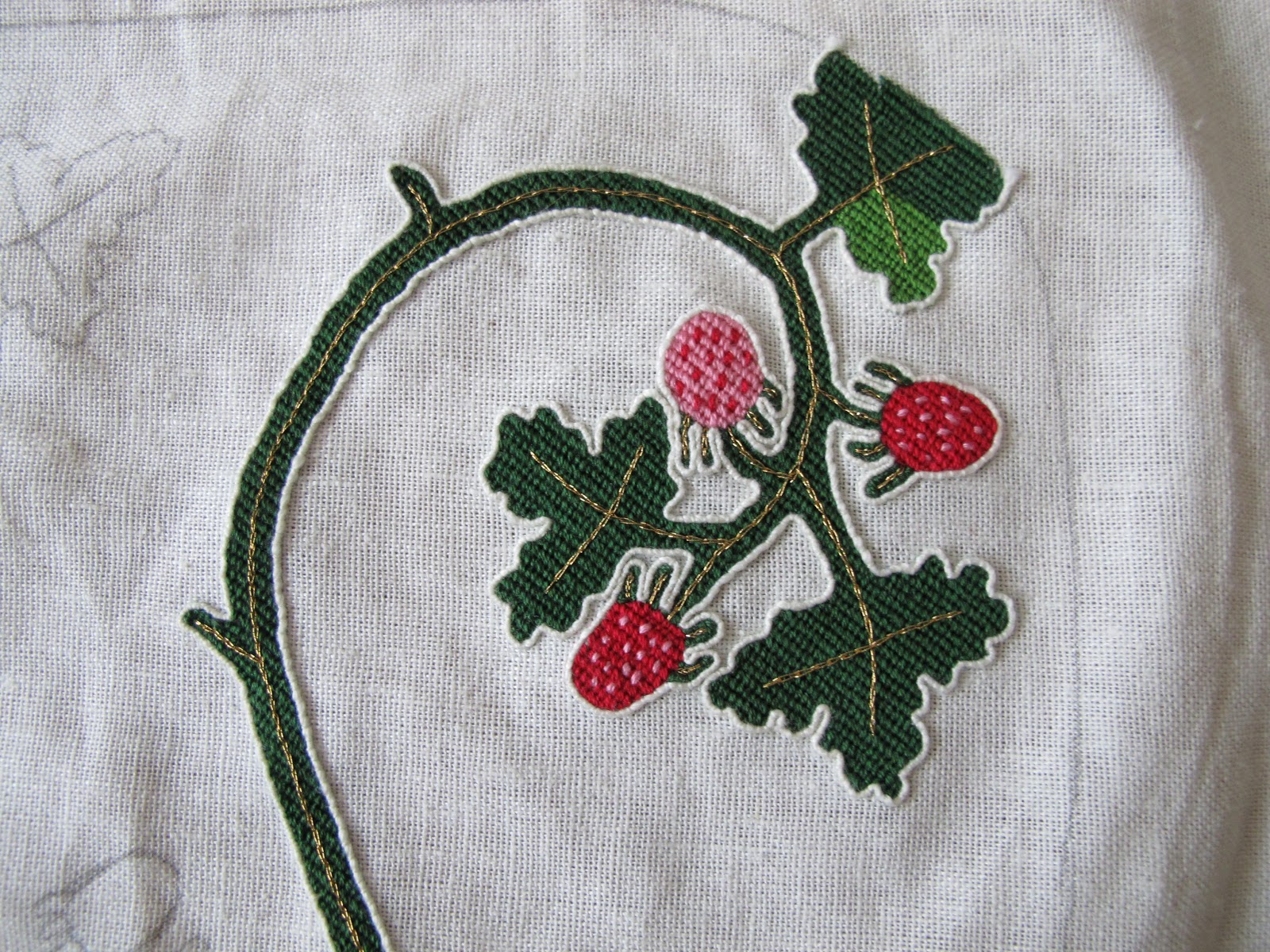 They aren't meant to be an exact copy, my gold thread is quite a bit thinner and I used a different colour for the light green parts, but they will look pretty much the same when they are done. I'll do another post on them when they are finished, which should be sometime this year.
Posted by Vincent Briggs at 16:00 5 comments: