Still rather behind on blogging, but I'm catching up! Here are some blue silk breeches I finished earlier this autumn. 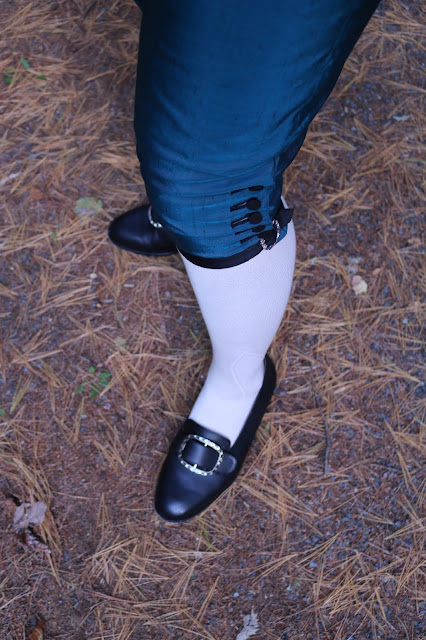 They're made using a couple of pieces of silk from my stash that I've had for a very long time and wanted to use up. This thin, slightly slubby blue one that I got from my local fabric store about 5 years ago, and a black one in the same weave because there wasn't quite enough of the blue. The legs are lined in a charcoal grey linen that has also been in my stash for years, and the waistband and kneeebands are lined in a few scraps of light green cotton sateen I got at a fabric swap a couple of years ago. 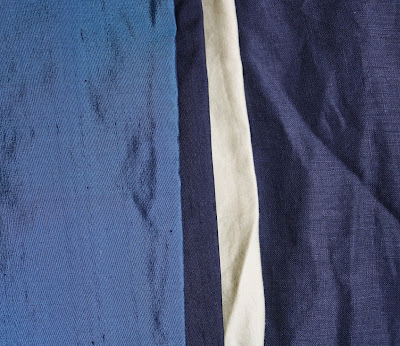 I decided to do contrasting black kneebands, plackets, and waistband because the pair in this fashion plate has them! (I did something similar on my grey wool breeches a couple years ago, but it was a much more subtle difference)
Delightful as his are, black & blue will go with more things in my wardrobe, and I'm also leaving off the trim on the sides and inseams. I'm not sure what it is, perhaps applied ribbon?
I know I keep saying I'll do a thorough post on fall front breeches construction, but I'm afraid it won't be this one because I only took 4 progress photos. If I recall correctly, I didn't even have my bad camera with me, and was borrowing an even worse one that was so frustratingly slow I didn't bother.
I used the same pattern as I did for my orange silk breeches.
I did my plackets by machine, same as in my tutorial post, but hand sewed down the outside bit so it looks nicer. Aside from the front closure, the rest of the construction is fairly similar to my fly front 30's ones. 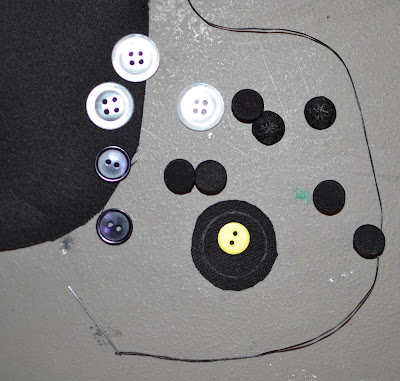 Since the materials aren't particularly great, I decided to use plastic buttons instead of reproduction blanks for my covered buttons. I also used scraps of black silk taffeta from my most recent waistcoat to cover them, since it's thicker and will hold up to wear better. 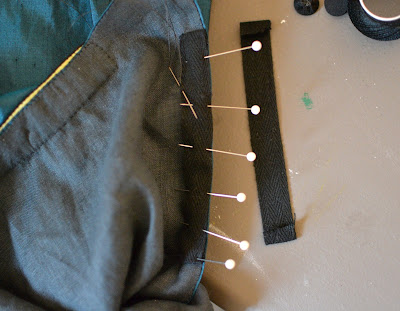 Before sewing the buttons on I backed the area with a little piece of cotton twill tape, as the lining and outer material are both pretty thin and I was worried they might tear.
I did 5 buttons at the knee instead of my usual 4, because the buttons are rather small so it looked nicer with more. The buttonholes are all done by hand with cotton pearl, as usual.
I initially put them a bit too far in from the edge, and had to move them right to the very edge of the underlap because it was too tight to button over any of my stockings except the thin silk ones. I had to put the buttons very close to the edge on my orange breeches too, so I have now slightly extended this bit on the pattern. 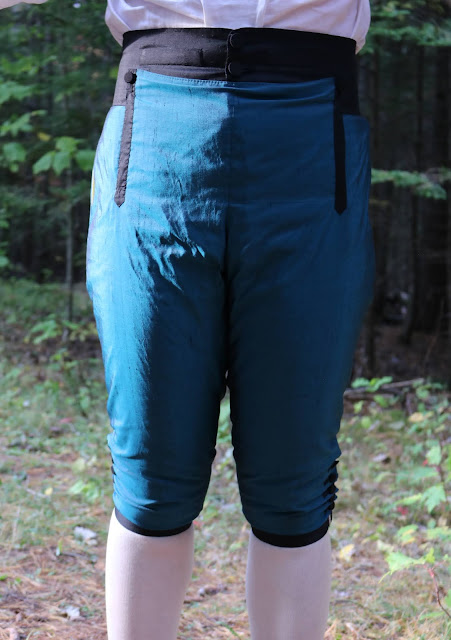 The long seams are all by machine, and the lining edges and kneebands and pocket welts and such are by hand. 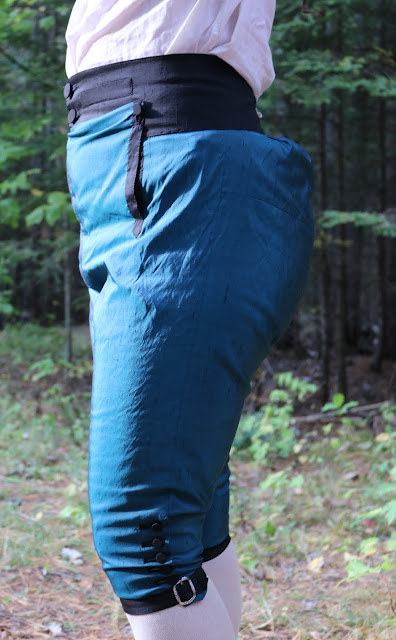 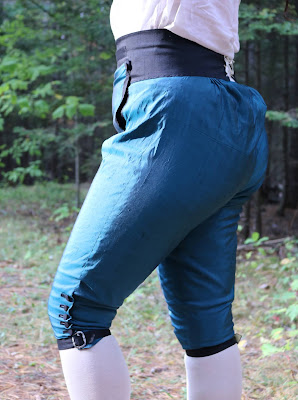 I put 3 pairs of eyelets in the centre back of the waistband. I've never seen more than 2 on actual 18th century ones, but the buckram I used for the waistband wasn't nearly as stiff as it should have been and I didn't want it to crumple up too much back there. 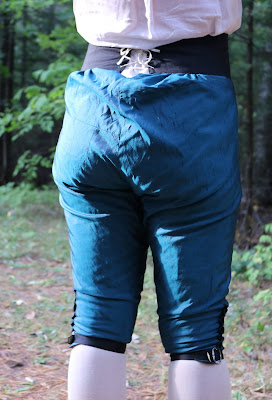 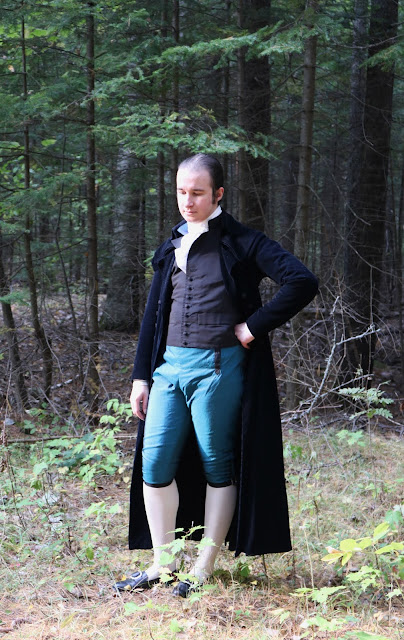 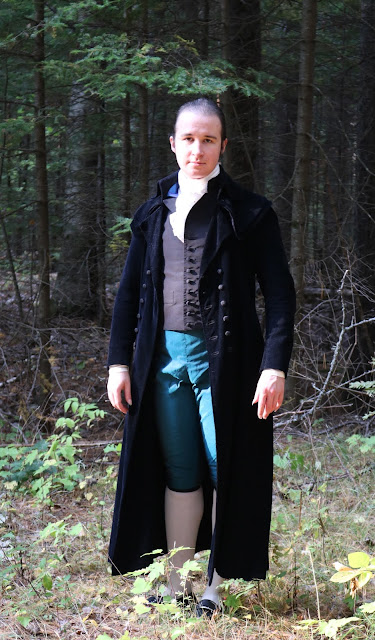 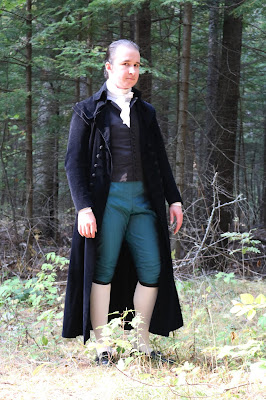 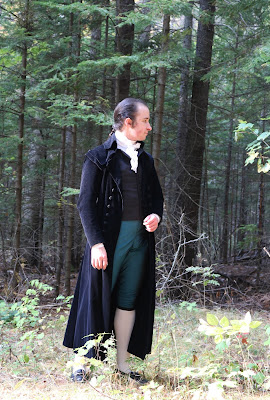 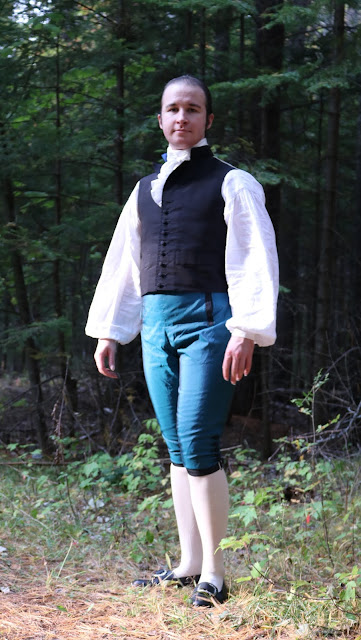 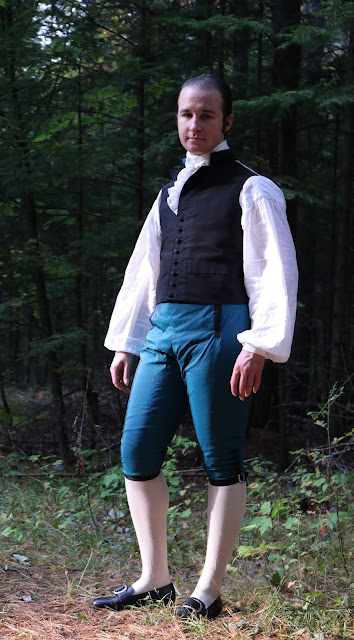 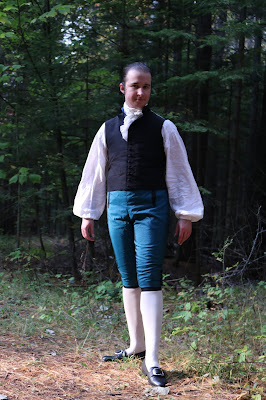 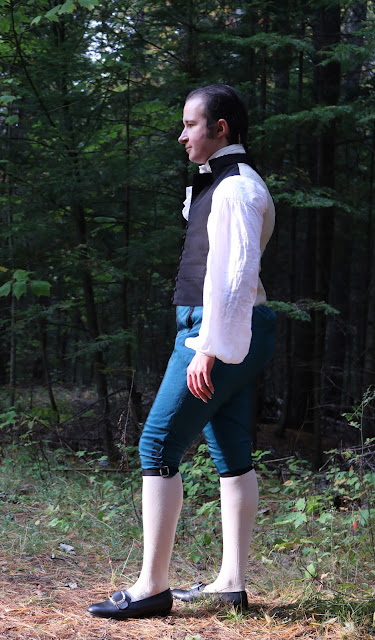 Since this was all made from stash materials I submitted it for the "No-Buy" Historical Sew Monthly challenge.
What the item is: A pair of man’s breeches.
How it fits the challenge: The materials are all ones that either were given to me, scraps, or things that have been in my stash for years.
Material: 1 metre of blue silk dupioni (The smoother kind, with only a few slubs), a small amount of black silk in the same weave, light green cotton sateen for the lining of the waistband, kneebands, and pockets, dark grey linen for lining the legs, a few tiny scraps of heavy silk taffeta for the button covers.
Pattern: Drafted by me.
Year: Inspired by a fashion plate from 1788, but I think they could work just fine for a bit earlier and a bit later.
Notions: 2 weights of buckram, linen thread, silk thread, poly thread for the machine seams, DMC cotton pearl for the buttonholes, 15 plastic buttons (instead of my usual wood or bone button moulds), a short length of cotton twill tape (to reinforce the knee where I sewed the buttons on), and a longer length of possibly nylon tape to lace the back.
How historically accurate is it? Ehh, about 75%? The materials aren’t awful but most of them aren’t quite right, the cut and fit is good, and the construction is about half by machine and half by hand. I also haven’t seen any breeches with 3 pairs of eyelets on the back, but the waistband is wide and the buckram not as stiff as I wanted, so I did 3.
Hours to complete: 41:20
First worn: September 28th, 2020
Total cost: Unknown. I bought the silk and the grey linen, but it was so many years ago I can’t remember the cost. 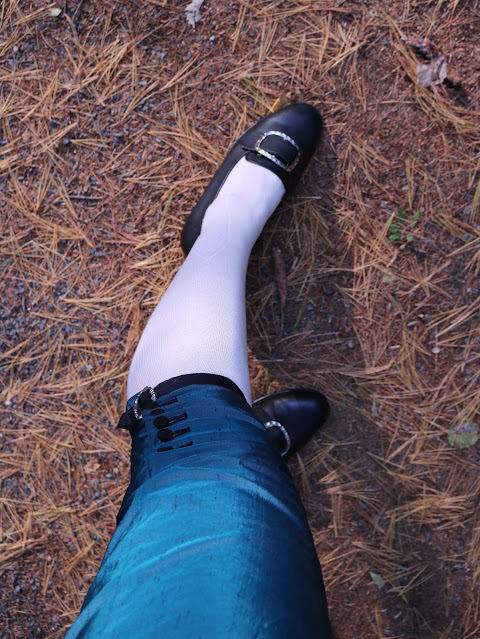