Remember this thing? I started it a little over 3 years ago, and then abandoned it because I didn't know how to do welt pockets at the time. 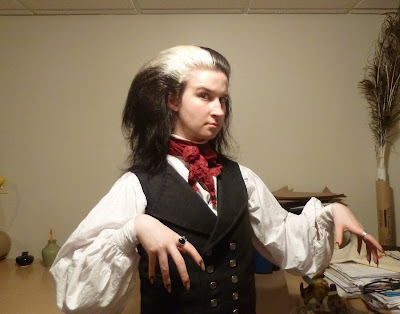 2 weeks ago I pulled these sad bits of linen out of my (shamefully large) Unfinished Things pile to see if I could get something wearable out of it.
The lining and outside were mostly assembled, but not sewn together. There were no markings at all to indicate where I'd traced out the pattern pieces. The entire mess was hand sewn in linen and cotton thread, because what 2013 me lacked in sewing knowledge he made up for in patience and stubbornness. 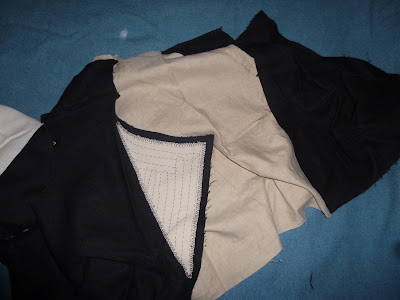 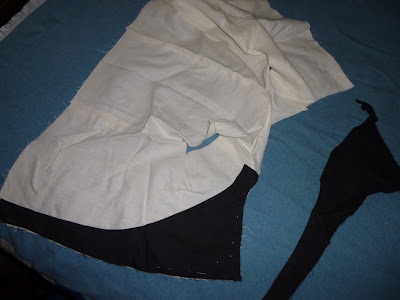 It had one facing backstitched to the lining, so I attached the remaining one in the same way.
I'm not sure what I was thinking when I attached the lapel interfacing like this. Sure, it's securely sewn down, but it's so incredibly flat. There should be a roll line, but there isn't! 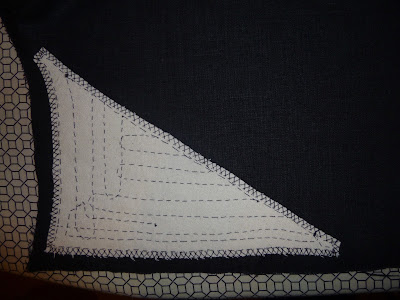 I found my pattern too. All crumpled and labeled "waistcoat #2" on one side with sharpie. And it appears I cut the lining out first, realized the side and shoulder seams were too far forward, and then cut out the rest of it after altering the pattern, because the outside and the lining have side seams in different places.
Because the linen is not particularly stiff, I stuck a piece of fusible interfacing in the front, which is rather awkward to do when the side and shoulder seams are sewn. I machine sewed 2 welt pockets in the front, a good 2 inches above where I had originally marked out the pockets. I left out the breast pocket because it didn't really look right with these lapels. I added canvas interfacing to the front, and then cut the lapels off it when I realized there were way too many layers in the lapels already. I'm not quite sure if I sewed it in correctly, but it seems to be working alright.
I machine sewed the front edges together, and hand stitched all the other edges closed. 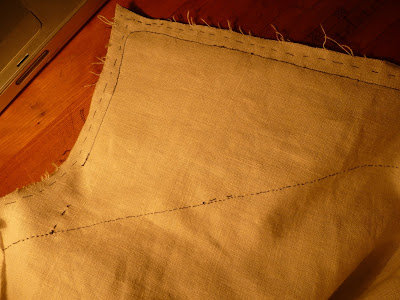 I tried to line my buttons up with the edge, like in the inspiration picture, but the edge on mine doesn't have quite as much of an angle so I probably should have just made them straight.
The only buttons in my stash that looked good on this were these flat spirally square metal ones.
For the row of decorative buttons I did the trick where you poke holes and thread a bit of tape through the shanks on the inside. It worked so well! I poked holes with an awl, but cut them a little bit to the sides because the awl holes weren't working well enough with all the layers of stiffening.
Originally I had intended to do tabs with lacing on the back, but I added ties instead. I'll do lacing on something that's worth the time.
The lapels really didn't want to lie flat, so I sprayed them with water, ironed them, and when they were still damp I pinned them down in the position I wanted and let them dry. There's a big wrinkle under the fold, but they lie more or less the way they're supposed to. 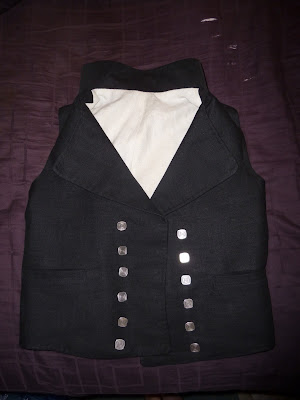 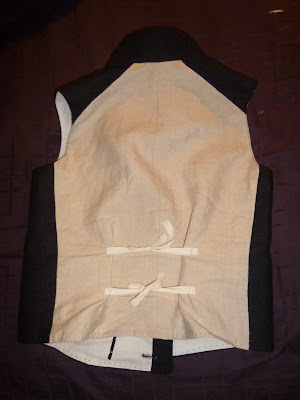 Overall, this turned out a lot less horrible than I expected. The collar annoys me though. As you can see from the pattern piece, it doesn't curve in at all. It's actually slightly curved in the wrong direction, because teenage me didn't understand that necks slope forward slightly and collars should do the same. Consequently it sticks out noticeably further than it should in the back. I want to replace it, but I don't know if it's worth the time since it's not visible under my hair.
I think it's rather funny that the waistcoat was originally inspired by one from Sweeney Todd, and now I have similar hair to his. (But I did not copy my hair from Sweeney Todd, I copied it from Dave Vanian.) 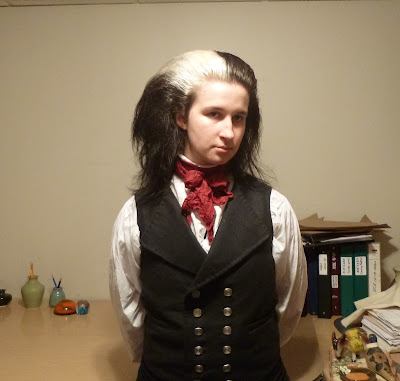 Not a perfect waistcoat, but at least it's done!