This is one of the few sewing projects that I consider to be evil.

A few years ago my aunt gave me two pieces of silk for Christmas, one was a dark blue and the other a pale yellow. It wasn't a yellow that I particularly liked, about the same colour as the interior of a banana. So I washed both fabrics together, hoping that the dye would run and turn the yellow fabric greenish, and it did. It came out a lovely seafoamy green. I found two extant petticoats in almost the exact same colour. It measured about 84x205 cm, plus a small rectangular scrap, which seemed like a perfect size for a petticoat, so it turned into a quilted petticoat project.
The fabric is 80 inches long, plus seam allowances, so there are eight 10 inch fish around the hem(yes, I'm going to keep switching between Metric and Imperial depending on which one is more convenient).
I stretched the fabric out on a big table, holding the edges down with masking tape, and transferred the pattern on with carbon paper. I turned it over and attached it again, spread cotton quilt batting over it, and muslin over that. I basted all the layers together, with the rows of basting about 5 cm apart. Then I started quilting, and shortly thereafter wondered what the hell I had gotten myself into.

The batting was too thick for running stitches, I tried it on a sample and they came out too big, and I'm far too stubborn to machine quilt it. So I'm stab-stitching the whole thing. That means the needle goes straight up and straight down again, through all the layers, with every single stitch. The stitches are about 1-1.5 mm long so it's going rather slowly.
I don't know what I was thinking. It's not even a good quality fabric, just a slubby dupioni that's thinner in some places than others.
Some of the lines aren't included in the carbon paper pattern, the scales on the fish and the background are drawn on with chalk, a little at a time.
I draw the lines with a chalk line maker; it makes nice thin lines, plus it's refillable, so I use it for pretty much anything that requires chalk.
For the fish scales I draw a bunch of lines from it's head to it's tail and use them to get the scales lined up correctly. I haven't got room for a quilting frame, so I'm using a hoop. 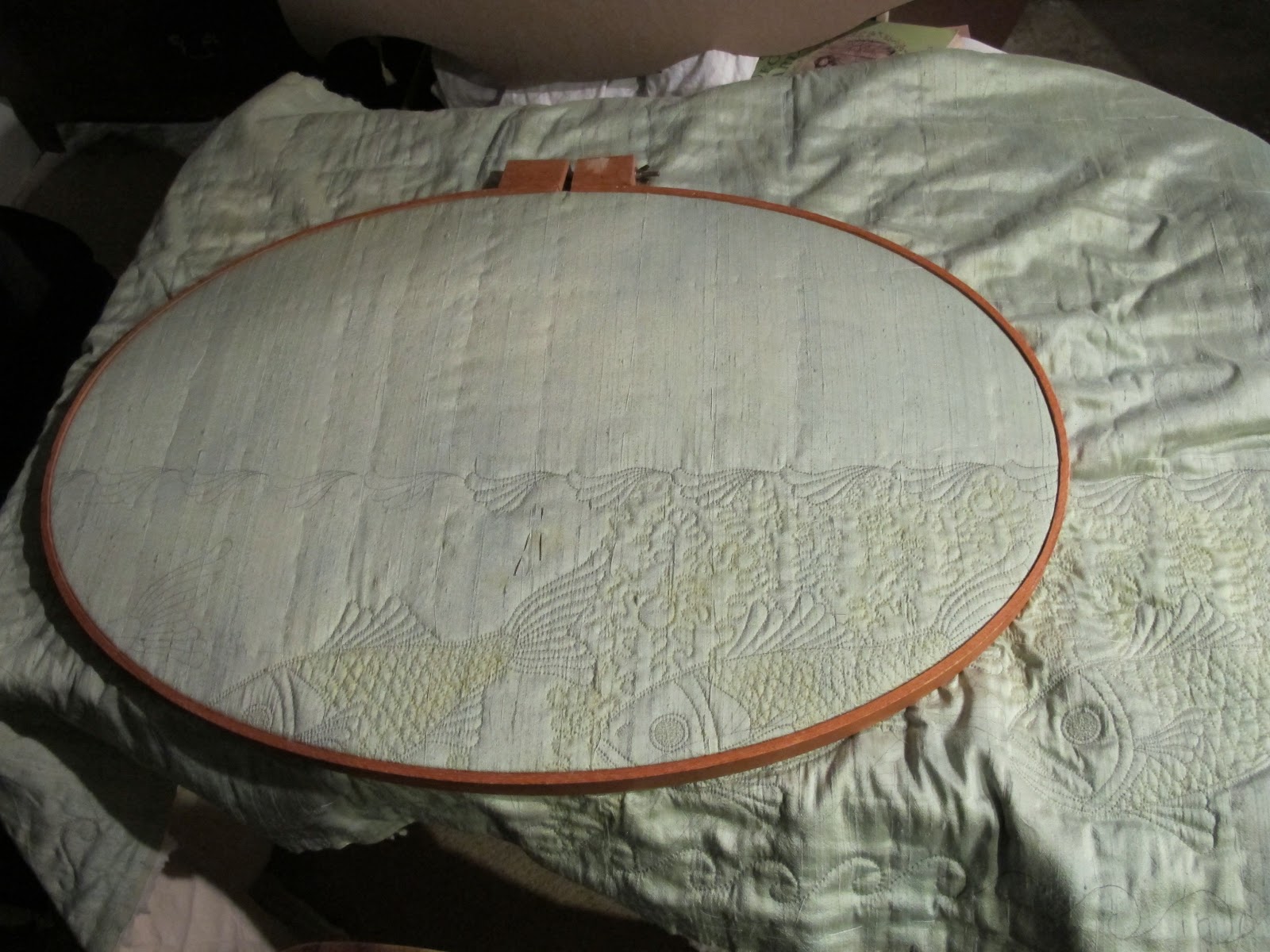 Once I'm finished the fish, seaweed, bubbles, and the swirly borders above and below them, I'll fill in the rest of the petticoat with a large fish scale pattern. I've seen a similar pattern on extant 18th century petticoats(like the one on page 86 of the big KCI book), only they were facing upwards. I don't have documentation for the fish pattern but I don't think fish are implausible. This crazy extant petticoat has lions, horses, trees, deer, birds, and mermaids around it's hem.
Judging from the dates in the sketch book, I started it sometime around April 21st/2012, and this is all I've finished so far.
Admittedly, I have been avoiding it for the past few months, and before that I didn't work on it every day. But I started working on it again after I took the photos for this post. I'm not keeping track of the hours I'm spending on this thing, it would be too depressing. I did time one of the fish though, it took 8 hours and 45 minutes.
I'll report back once I finish the hem design and start the scale pattern on top.

Hello again.
I haven't finished any more 1780's/early 90s underwear, because I was quite ill last week, with a horrible cold/ flu thing.
I should have finished the bum pillow at least, but I didn't. So the stays were my submission for the under it all challenge. The bum pillow is almost done, but I have temporarily lost all interest in it. My attention has been grabbed by another costume, but more on that project later.
Since I don't have a post-able amount of sewing progress, and I haven't posted anything in a while, here is a post about a costume that I started a few months ago.
It started as a random bodice that I drew to go with this sketch of my quilted petticoat (which is partly done and is taking forever, I'll do a post on it sometime).

I though the bodice looked neat, so I made some more sketches of it, and drew some pattern pieces and plans for construction. I wasn't planning on actually building it (I like to draw and plan out costumes just for fun), but then I found some green canvas in my mother's stash which was perfect for the interlining, so I decided to make it.

Here is a slightly better sketch. (you can click any of these pictures for a bigger view, the files are rather large.)
That's the general look I'm going for though, big and green with lots of texture. I'll be making the bodice, as well as a petticoat with a ruffle around the bottom. The bodice has 6 pieces, 3 are panels with hemp boning, and the other 3 are canvas boned with zip ties.
There are 3 fabrics for the bodice and 1 for the petticoat.
I'm planning on basting the lighter cotton on top of the darker cotton, sewing wobbly lines all over it with the free motion foot, and cutting some of the lighter cotton away so that it looks like seaweed. Then maybe scruffing it up a bit with sandpaper and decorating it with pearls and seed beads. These pieces of decorated, textured fabric will then be used to cover the panels that are boned with zip ties. You can sort of see the wobbly seaweed lines in this sketch.
The pattern pieces are based on the magical pattern piece that makes bodices fit (as long as they are more or less cone shaped), the same as the 1790s stays.
I drew the channels with the help of a quilting square, which is marked with masking tape so they are always the correct width.
The bodice is progressing slowly, the structural bits are less than half done.
And that's all for now, I'm splitting this into a bunch of posts because there are so many different pieces. Part 2 will be about the corded panels. The cording is curved, and a bit tricky to sew in, so they get a whole post to themselves.
Posted by Vincent Briggs at 17:42 6 comments:

Email ThisBlogThis!Share to TwitterShare to FacebookShare to Pinterest
Labels: fantasy and fancy dress

These took a little longer than I expected, I'd forgotten how long it takes to sew that much bias tape on. Here are some more pictures of the construction.

Tabs are a pain in the butt to bind, it took me about 7 hours to do both halves. They're worth it though, if they didn't have tabs they would cut in and be horribly uncomfortable.

I am quite happy with how they turned out, even though I don't like the colours. This sort of colour combination belongs on cheap, candy coated chocolate Easter eggs. I made the stays out of these fabrics because I'm saving the prettier ones for outer garments.

I made a silly mistake while binding the armholes. Here it is.

I wanted to put the seam in the bias tape right underneath the arm so it wouldn't show, I got it in the right place on the left side, but wasn't paying enough attention when I did the right side. I started the bias tape in the wrong place, but had sewn all the way around before I noticed, so it wasn't worth re-doing. Oh well. It's underwear, so nobody will see it.

As you can see, I used metal eyelets. Yes, I know they're wrong for the 18th century, but my hand sewn eyelet attempts failed miserably. Maybe it was the 2 layers of canvas, or maybe my awl wasn't thick enough. Whatever the reason, I couldn't get them bigger than a pinhole.

I could cover them with thread, but I probably won't.

Fabric: Less than 1 meter of purple cotton for the outside, from stash.
Less than I meter of pale blue cotton for the lining, also from stash, they were left over from a petticoat that was made from a sheet.
About 2 meters of canvas for the interlining, I don't know exactly how much because they were in odd shapes. Also from the stash.
Yellow cotton for the binding, I bought 1.5 meters but only used a tiny fraction of it.

Pattern: Diagram XXIX from page 152 of Cut Of Women's Clothes 1600-1930 by Nora Waugh. "Corset of Lady Hamilton" From the Victoria and Albert Museum, according to the book anyways, I still can't find it in their collections.

Notions: 8 zip ties, 48 eyelets, and some cord that I took from my other stays.

How historically accurate is it? The pattern is accurate, the materials and method of construction are not, although the godets and binding are hand sewn.

Total cost: About $ 8.00, for the eyelets and zip ties. I'm not going to calculate the minuscule cost of the binding.

These stays were tedious, but not too difficult to make. I only hit my thumb two or three times while hammering in the eyelets, far fewer than when I made my first pair. This is a good pattern, I'm surprised at how well they work with only 8 bones. They fit quite well. The only problem with the fit is that they curve out a bit to far at the top front.

I'm not done the challenge yet though, I'm making a whole set of undergarments for this era. Right now I'm working on a bum pillow, which should be done relatively soon.