Shockingly, I recently sewed something for someone else that's not a commission!
My friend Naxius (who commissioned the AOA Loki Bullshit Bodice and the Balem robe) had a birthday recently. And so I made him a scarf that turned out to be WAY more frustrating than I anticipated. 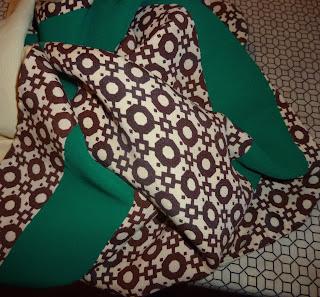 It's a scarf worn by Loki in a scene from The Avengers where he shows up at a fancy art gallery event in Stuttgart, Germany. It was only on screen for about a minute, but has been copied plenty of times by Loki cosplayers and I figured it would be a perfect birthday present for Nax.
The scarf in the movie is made from a pale yellowish fabric with a woven dark brown geometric pattern and tiny green squares.
I decided to replicate the pattern as closely as I could with a screen print, since I go to a school where I'm learning fabric printing and can use the equipment.
I spent a very long time making the pattern on Adobe Illustrator. I did it all as one print because there was no way I was going to make 2 screens and try to line them up just to make the little squares green.
I ended up having to re-do my screen 3 times. The first 2 times I put the pattern on the screen I made foolish mistakes. The photo below shows my first attempt, in which half the tiny squares are missing because I didn't pay close enough attention to my repeat.
I won't go through the whole screen shooting process, but it involved photocopying and a very big vacuum light table in a darkroom.
I did several test prints. The silver on black one on the left was my failed first screen, and the blue one on the right is from my third and final screen. I also did a test print on a bit of the final fabric.
Because the scarf in the film is quite swishy, I used rayon. I had a piece of yellow rayon that was a lovely drapey texture, but too dark. I bleached it and dyed it a pale straw colour.
I printed 6 repeats of my 10" x 15" pattern on it with dark brown dye paste. (Which I also won't go into detail on, but it involves  mixing up dye powder and a particular sort of thickening goop.)
Amazingly, I managed to get them all lined up nearly perfectly!

The fabric had to be steamed to set the dye paste, and even though the two samples I did with dye paste turned out completely fine, somehow a bit of water leaked into the steaming package. Consequently the print is not entirely even in colour, but thankfully there was very little blurring.
I had originally intended to use rayon for the green portion as well, but after three attempts at dyeing a piece of pale green rayon from my stash and still not getting it a dark enough shade I gave up on that. I grudgingly bought some synthetic suiting instead, which was the perfect colour and nicely drapey, though a little thicker than I would have liked. 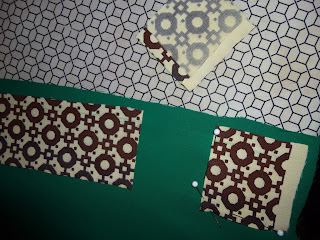 I marked out a 57" by 15" rectangle on the green stuff and marked all the stripes on with my 5cm wide ruler. I cut rectangles of the printed stuff to fit in the spaces around the stripes, because a reverse-appliqué seemed the best way to do it.
I carefully pressed in the edges and slip stitched them all down by hand.

The local fabric store had some swishy rayon fringe in the perfect colour for the scarf, but it was too short.
I pulled all the doubled fringey strings out of their little chain stitch thing and re-strung them all from one end so they'd be long enough. (Don't worry about the little bendy bits in the middle. I soaked them in water and they straightened out very nicely.)
I machine sewed a rectangle of the leftover un-printed rayon to the sides. After turning it inside out and slip stitching the ends closed I had to do a running stitch around the whole edge to get it to lie flat. I was very careful to make the stitches on the printed side as small as possible so they wouldn't show.
I trimmed the fringe to the correct length using a rotary cutter and my wonderfully useful 5cm wide ruler.
And it was finished!

It was a little over a week late, but I managed to keep it a surprise, which is something I'm usually terrible at.
He was very surprised! And so delighted I actually managed to get a photo of him smiling. (Not that he doesn't smile often, it's just difficult to catch on camera.) 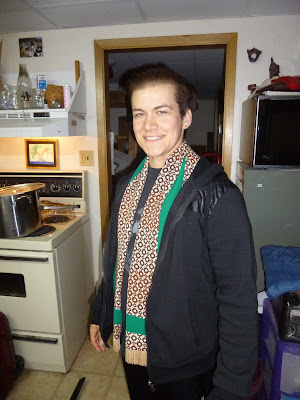 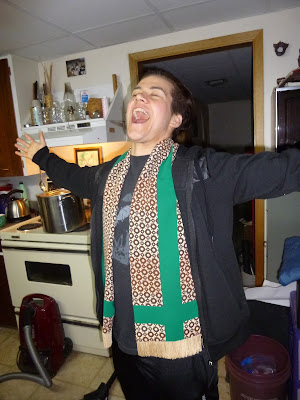