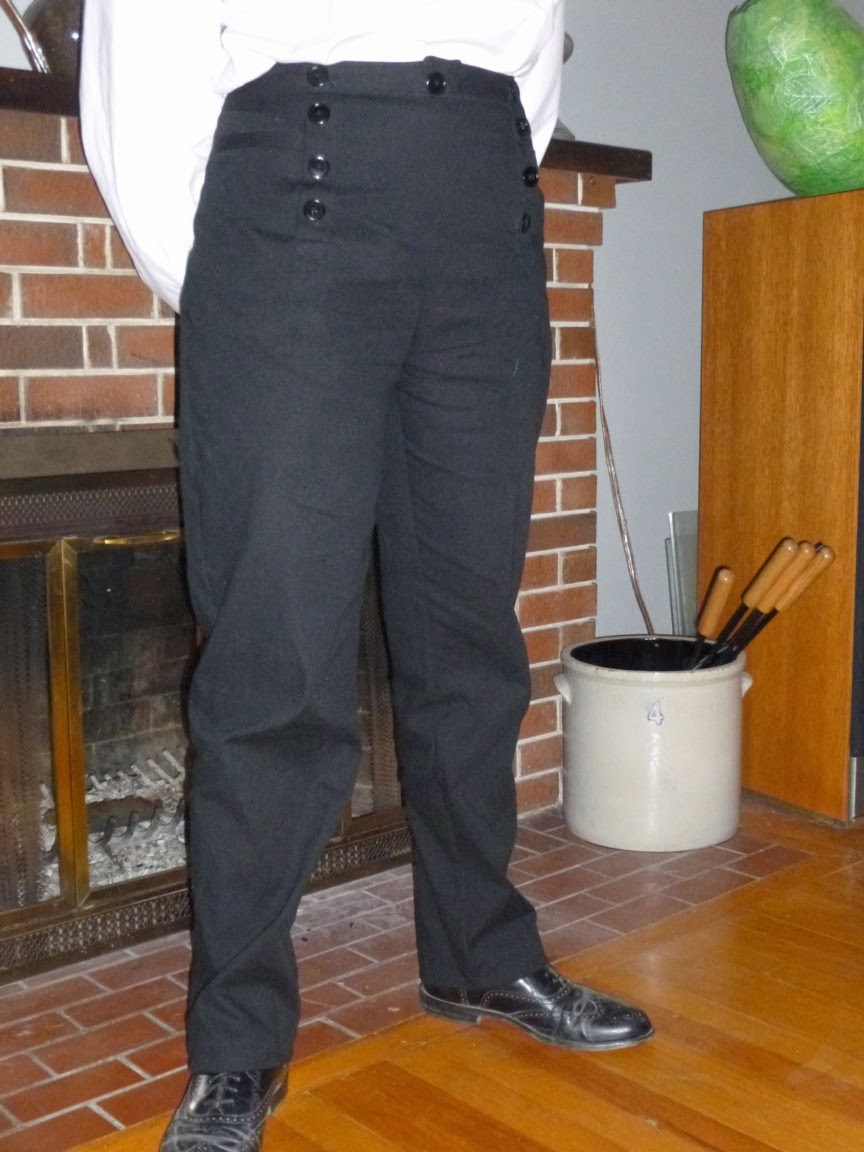 Pants have been on my to- do list for a very long time. I was down to two pairs of store bought pants, because I didn't want to buy new ones knowing they wouldn't fit. Last year I had four pairs, but two have since worn out, so sewing pants was something I couldn't put off any longer.

I made the pattern using the basic pant draft from school. I gave it a waistband, a fall front, and pockets.
I really like the fact that the waistband of this pattern is actually at the waist. I can't stand low cut pants. 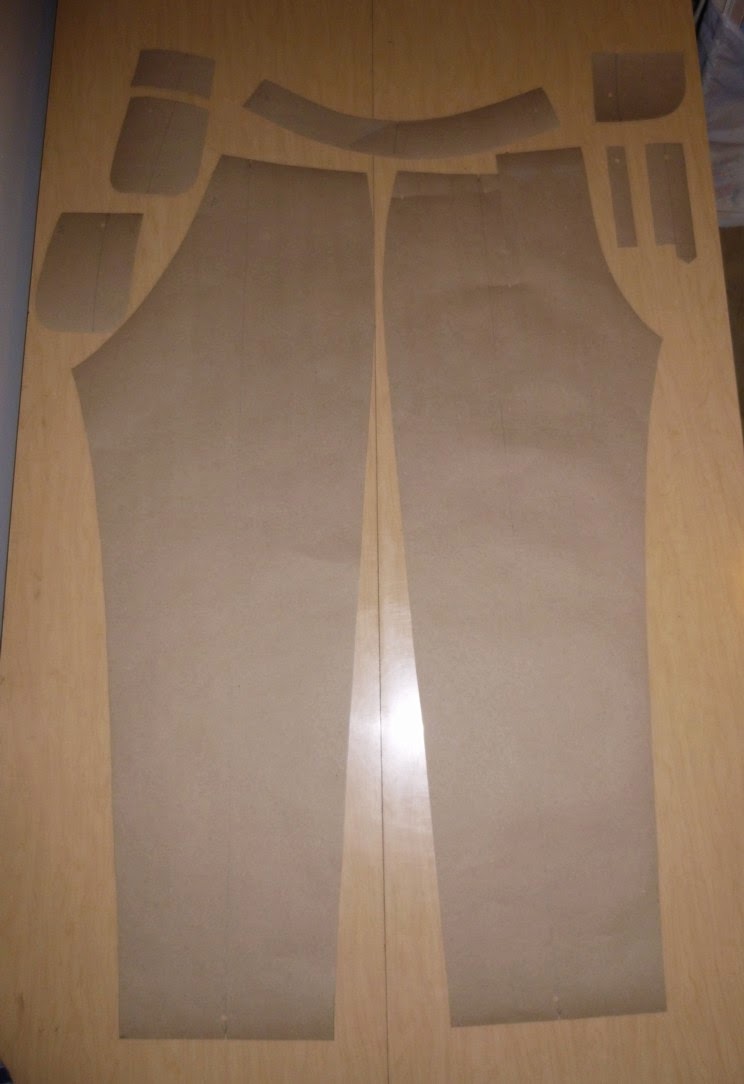 For the fall front I made two plackets, like you might find on a modern shirt cuff. 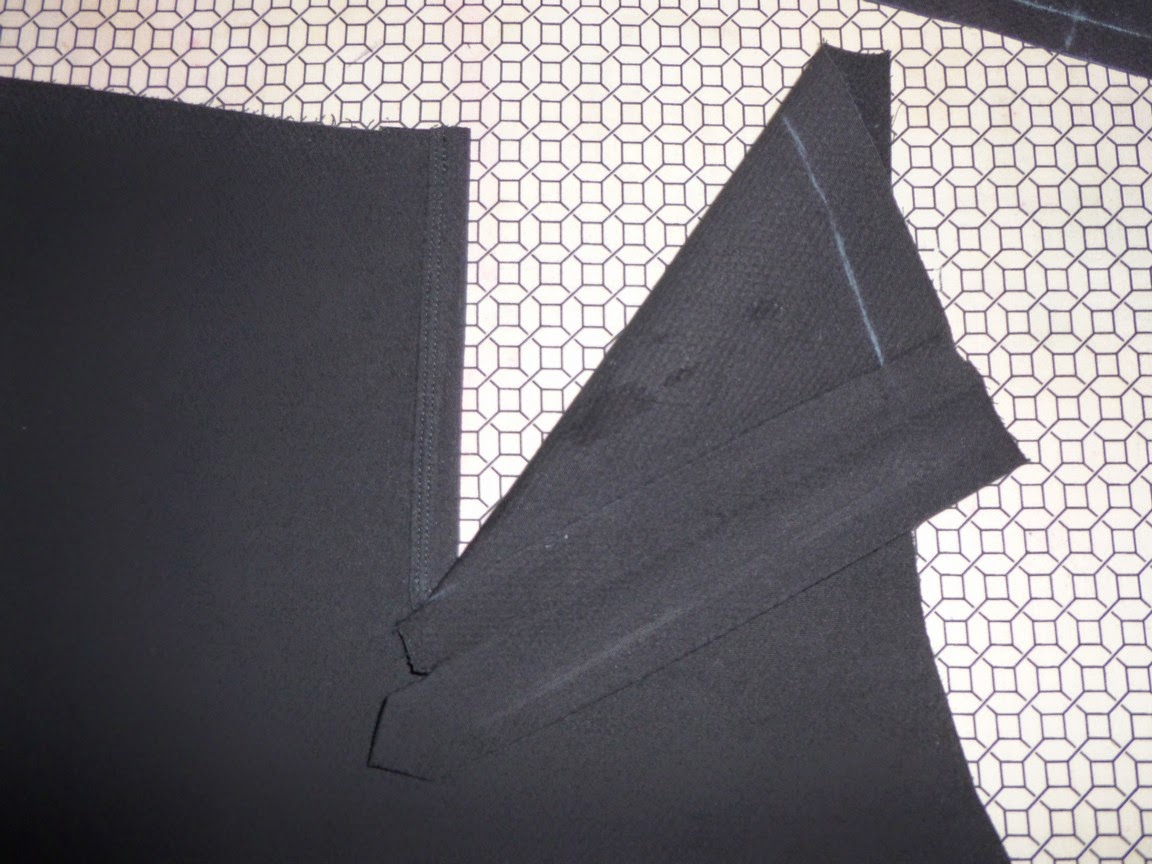 I didn't do a great job on them, but they work.
I did not take many pictures of the construction because I wasn't entirely sure what I was doing and consequently messed a few things up. I will go into more detail in a later pair of pants, once I have things figured out.
Here are the completed pants. 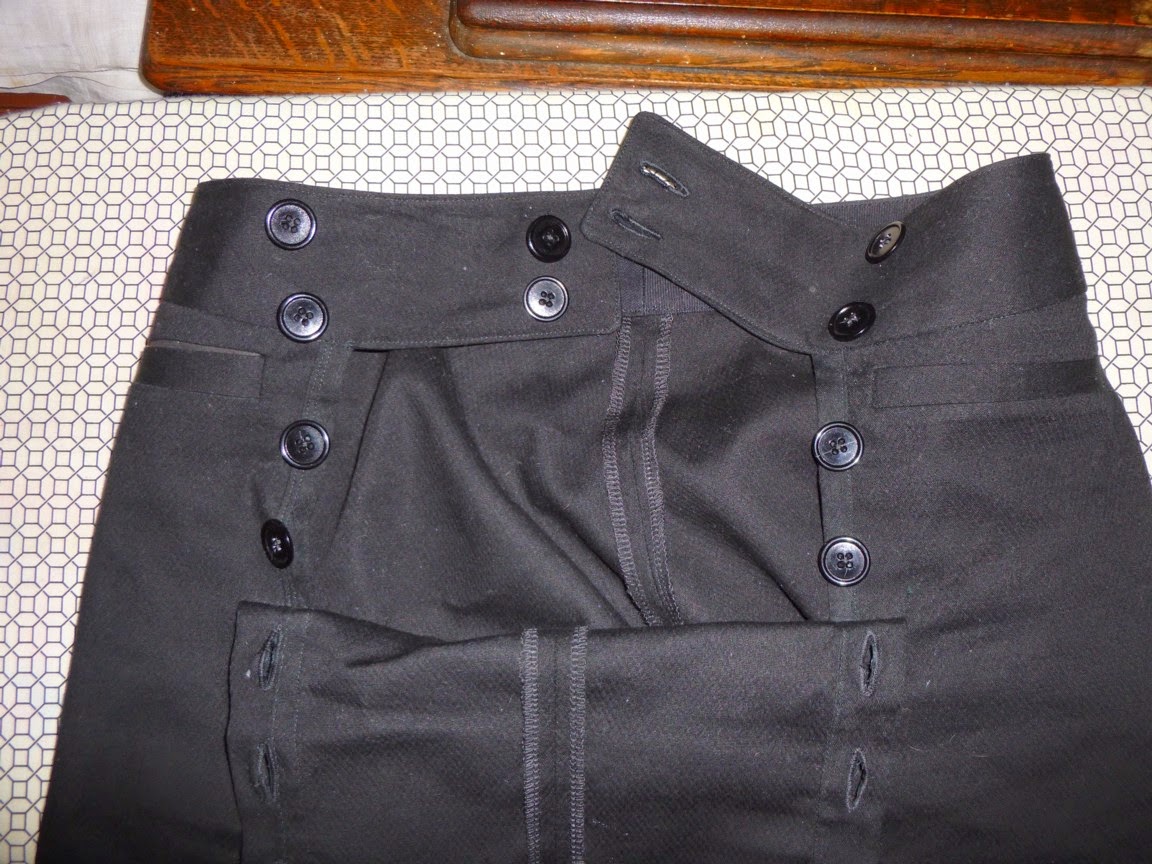 They fasten with ten buttons, and there are two welt pockets in the front. 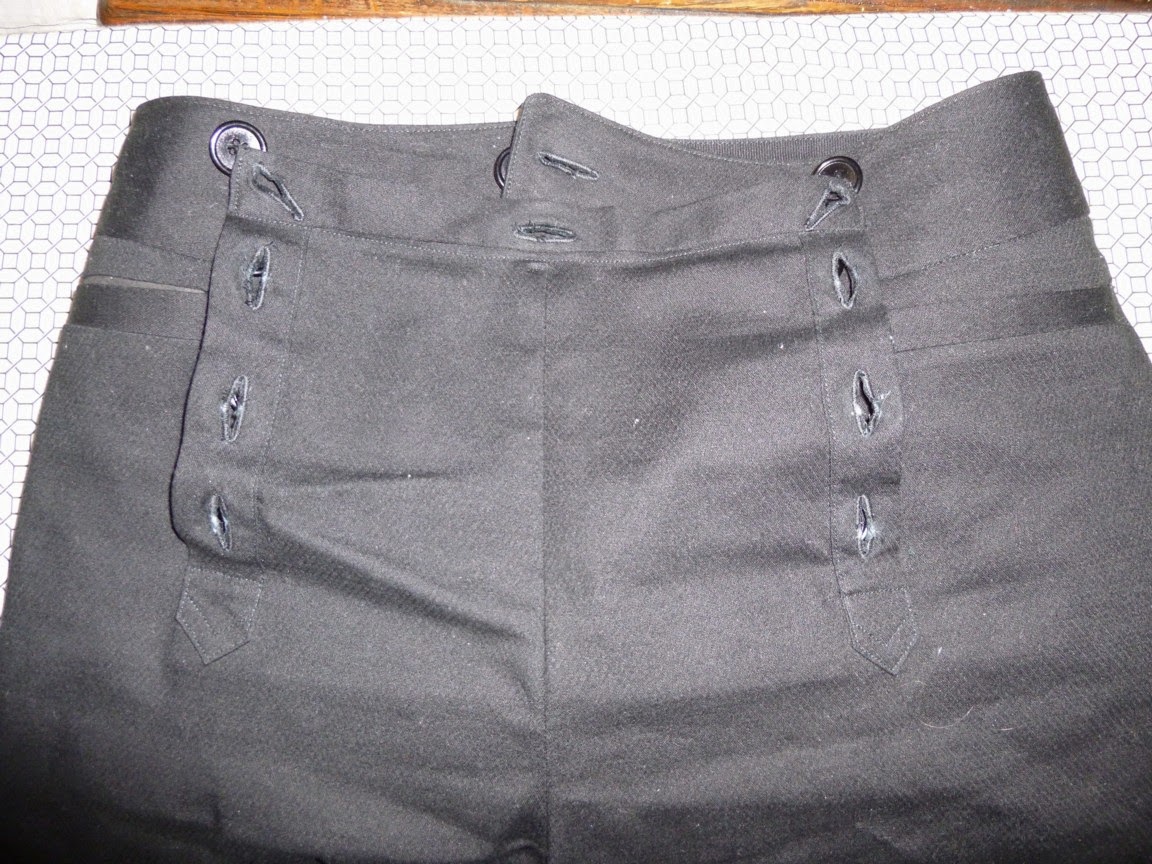 The fabric is a cotton blend that I got on clearance. I think it was one of those 97% cotton, 3% spandex ones. It has a bit of stretch and a sort of nubbly texture. I made the inside of the waistband out of black denim, so I didn't have to interface it. The pocket bags are plain, tightly woven cotton. 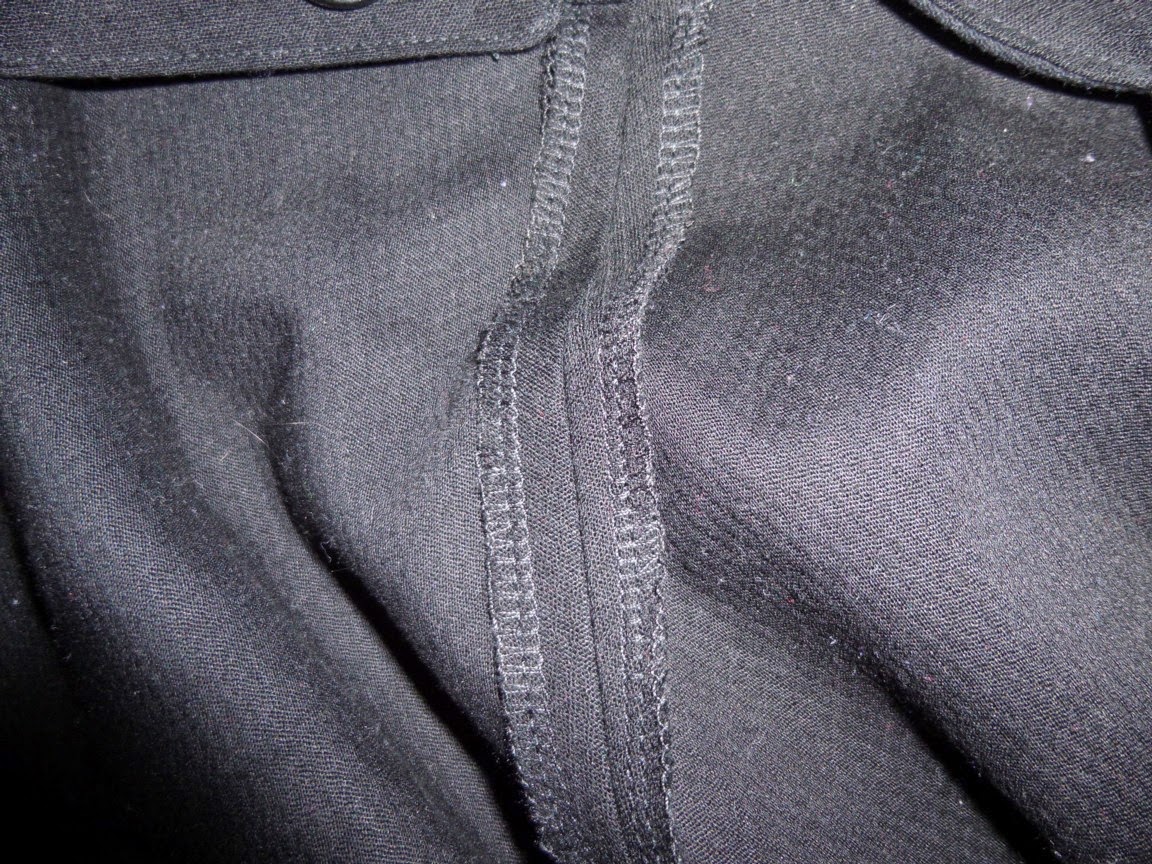 The seams are all machine sewn (which is why the welts and plackets are rather uneven) and the raw edges are serged. 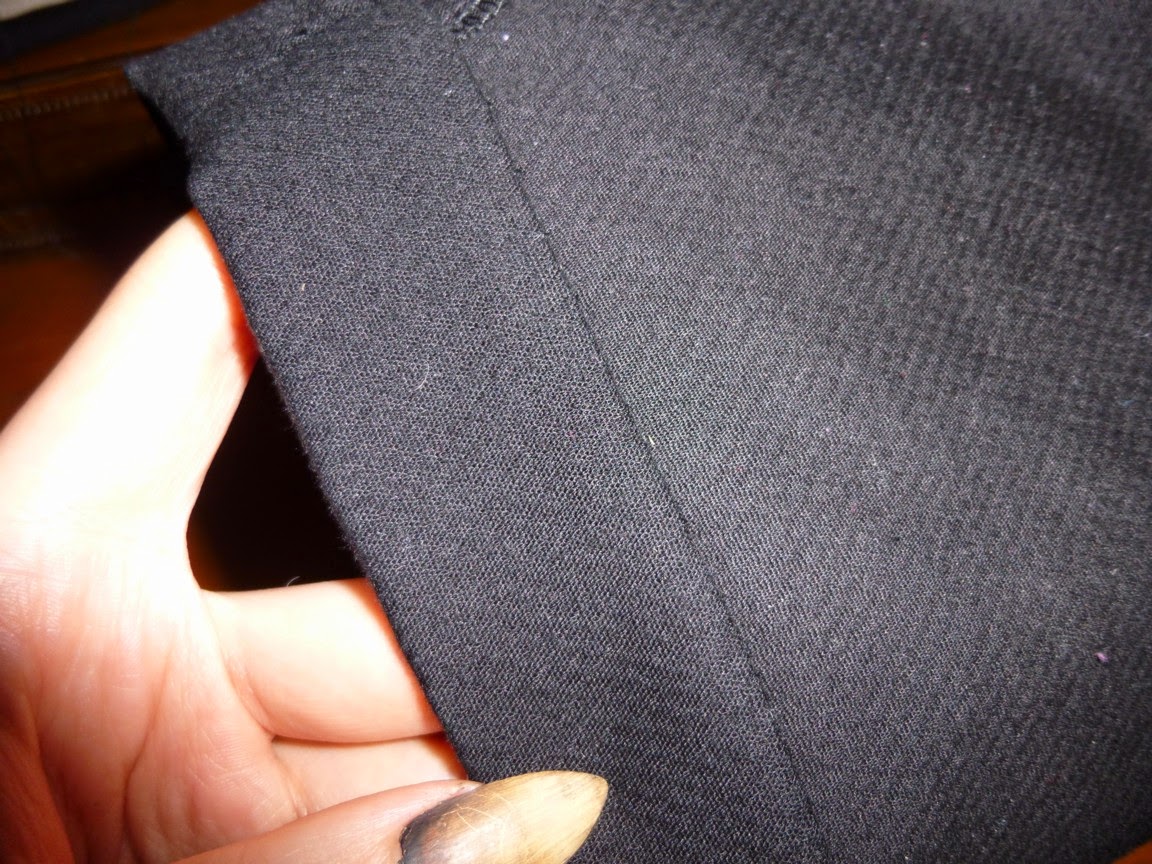 I hemmed it by hand with a slipstitch.
I cut flaps for the inside of the fall front, but didn't put them in because the under side of the placket went where they should have gone. Next time I will have thought things through more thoroughly. 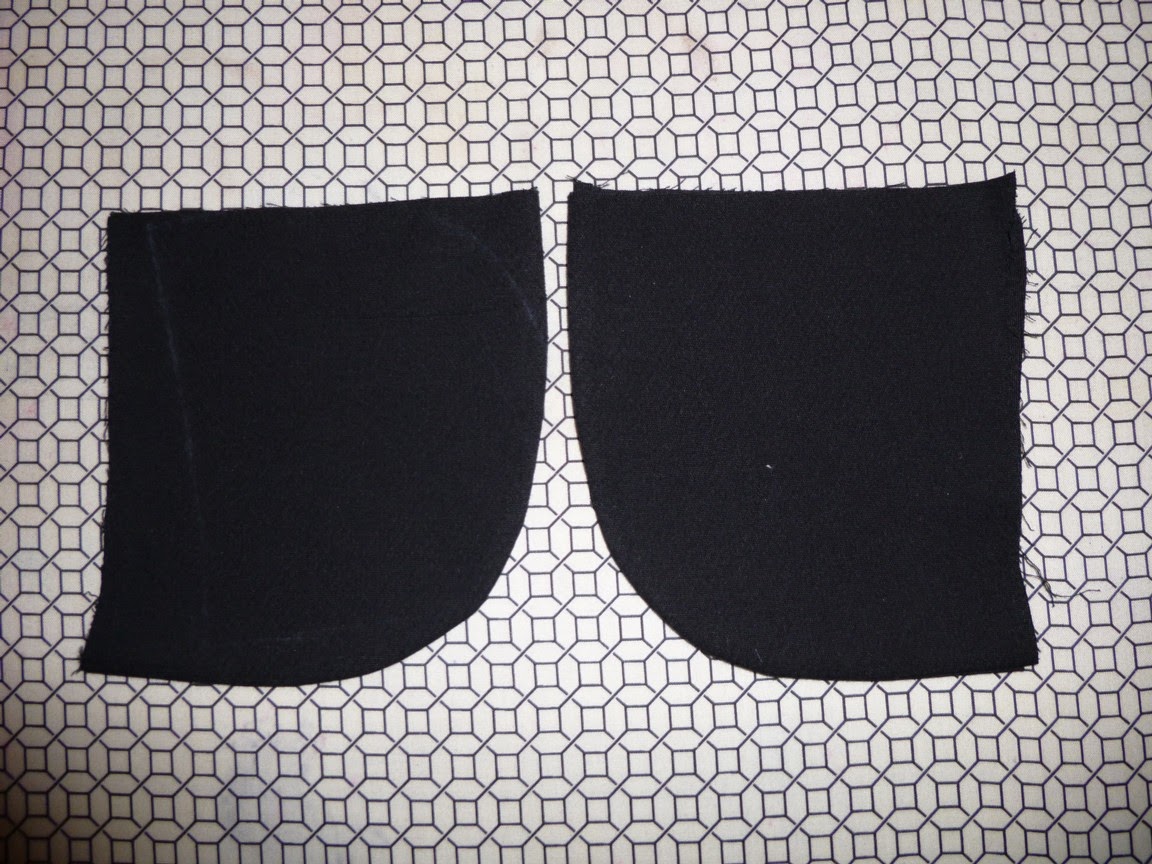 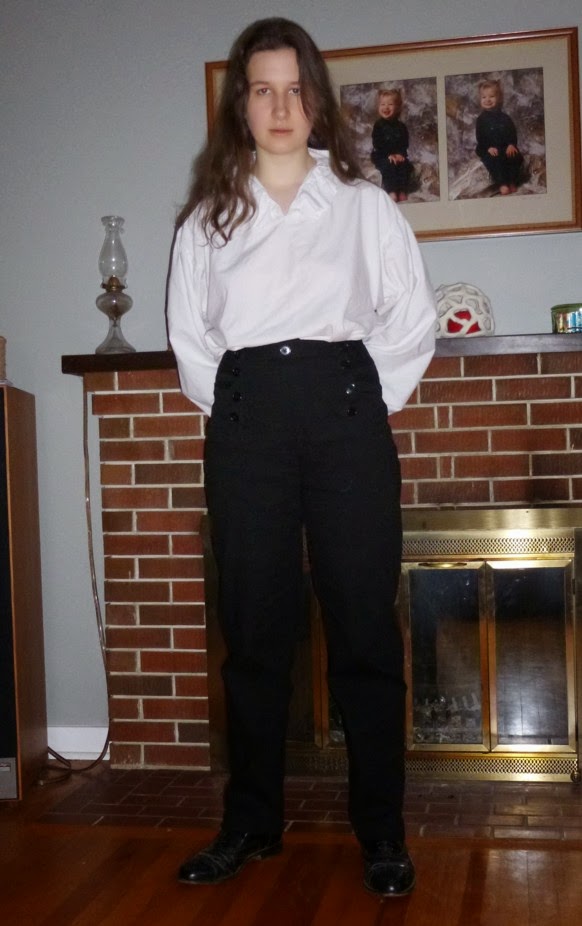 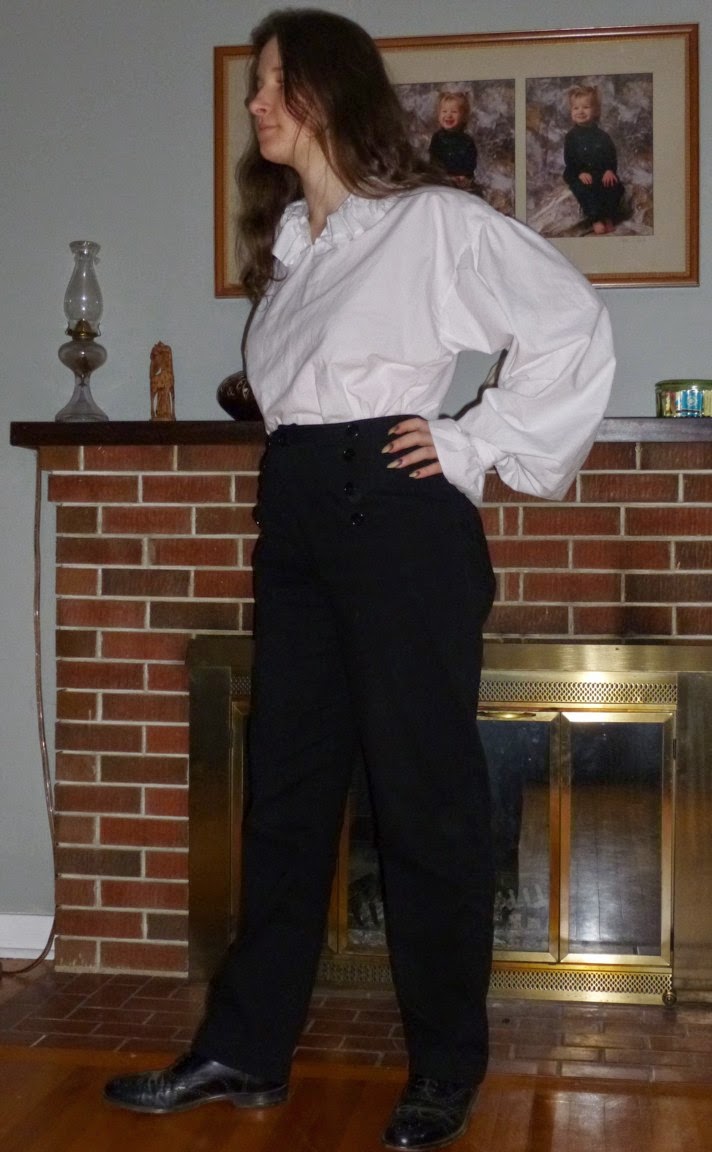 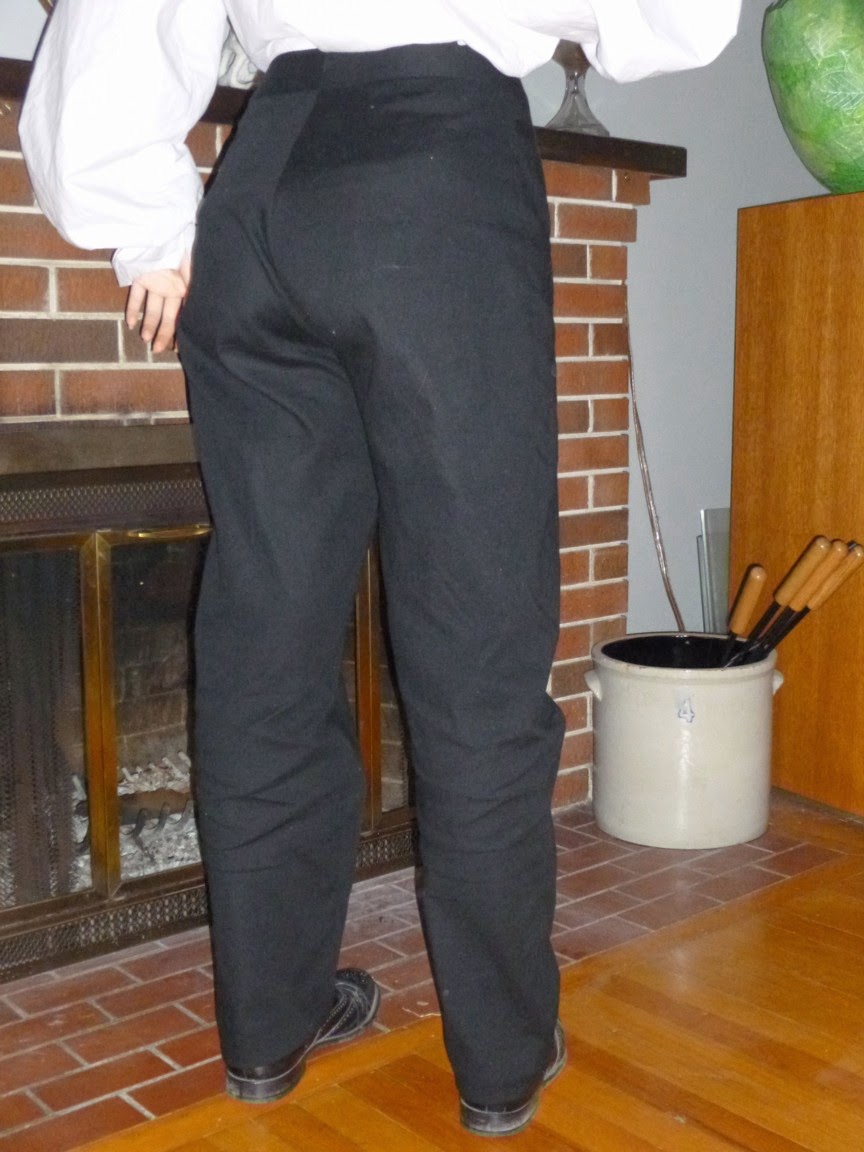 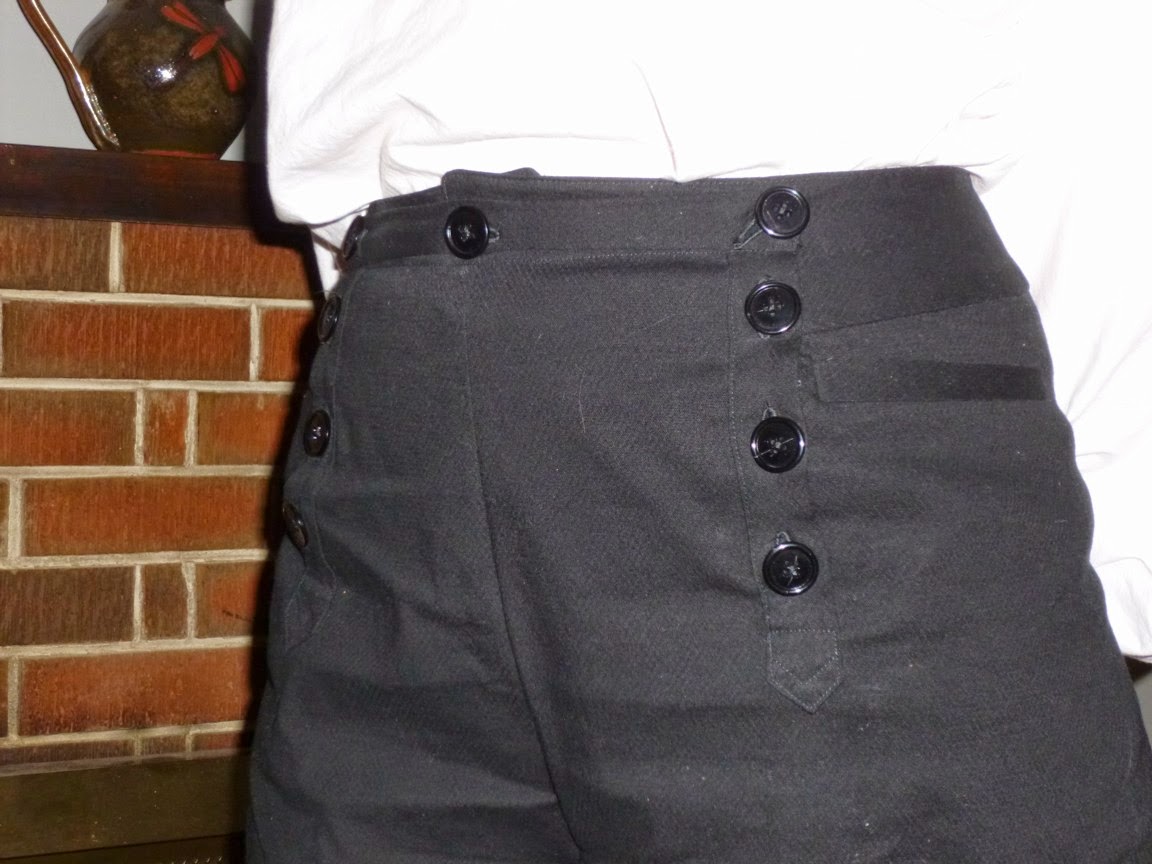 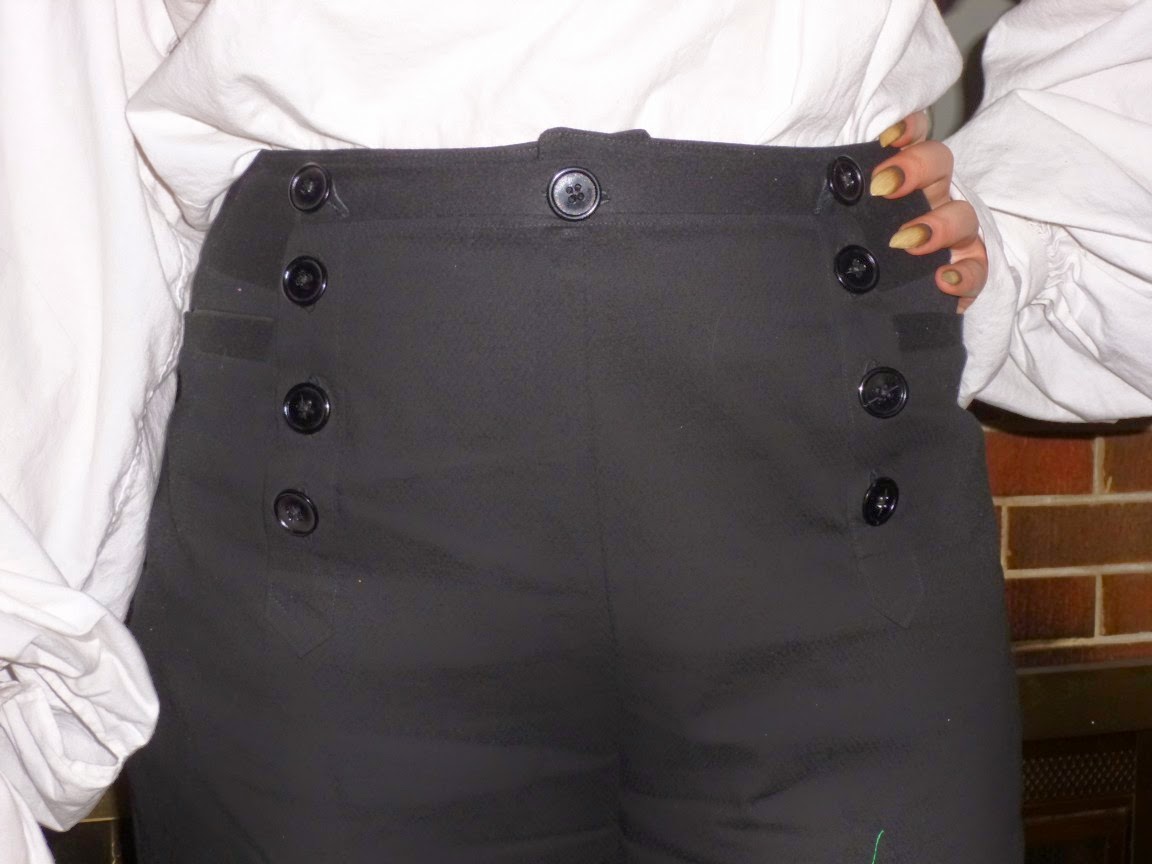 I really like them. They fit, and they have buttons!
I much prefer buttons to zippers.
Posted by Vincent Briggs at 10:49 7 comments:

Email ThisBlogThis!Share to TwitterShare to FacebookShare to Pinterest
Labels: pants

Nora from The Shadow of My Hand, and Crystal from Adventures in Bias Tape have both nominated me for the Leibser Blog Award. Many thanks to both of you!
I did not know what the word "liebster" meant, so I looked it up and found that it means "beloved person" in German. What a kind award.

Thank you Crystal and Nora!

Hmm, other blogs to nominate. I don't read a huge number of blogs, so I had a bit of trouble finding ones with less than 200 followers that I read regularly.

1. Basically Creative Me. Adi is the only other teenager I have found in the Costume Blogging world. The 1860's things she has been making are lovely! And I am fascinated by the metalworking.

2. The Laced Angel. Such marvellous corsets. And well fitted bodices too. Her lattice dress is just amazing!

3. Mistress of Disguise. So many different costumes! Historical ones, Star Trek ones, anime ones. All of them are awesome.

Is 3 enough? Yes, three is fine. Now on to the questions.

1. Do you have a favourite historical period?

I don't like having to pick favourites, but if I were to choose a favourite decade it would be the 1780's.

2. How, when and why did you start costuming?
Somehow the thought entered my head that 18th century men's coats were utterly fabulous(which they are) and that I had to find pictures of them. My google searches brought me to American Duchess and her commissioned velvet suit, which led me to many more costuming blogs. This was in 2010. I learned to sew about a year later.

3.What is your favourite part about costuming?
All the planning and sketching. I love visualizing the entire project and making loads of little diagrams showing how it all fits together, which is why I have started many more projects than I have finished.

4. And the least favourite part?
Not finishing things, and getting mad at myself for not finishing them, and then starting more new projects anyway. I also hate sewing muslin mockups. But I always sew them because I hate ill-fitting garments more.

5. Which do you like better, sewing by hand or using the sewing machine?
Hand sewing!

6. When it comes to sewing and costuming, are you a planner or do you just dive in and make it up as you go?
A planner, see #3.

7. What inspires your sewing projects?
Paintings, fashion plates, extant garments, other costumers who have made things that I am jealous of.

8. Do you have costuming idols?
Yes. Coture Mayah and Before the Automobile. They are amazing.

9. If you had an unlimited budget and all the time in the world, what would you sew?
Ooooh, I like this question!

I would sew everything Lestat wore in Interview with the Vampire.
And then I would sew everything Armand wore.
And I've always wanted to make a white tie sort of outfit, like the one Bela wore. Big swooshy cape included.
There are some pieces from The Count of Monte Cristo that I'd like to copy too. Prosecutor Villefort's wardrobe in particular. He had a fabulous black & silver brocade waistcoat in one scene, and a deep plum- coloured coat. They were gorgeous.
This picture doesn't properly show the fabulousness of his costumes, but it was the only one I could find.
I would also make this bluejay coat that I designed a few months ago. I actually have all the necessary fabrics in my stash, so I might end up making it, though it's not particularly high on the list of priorities. 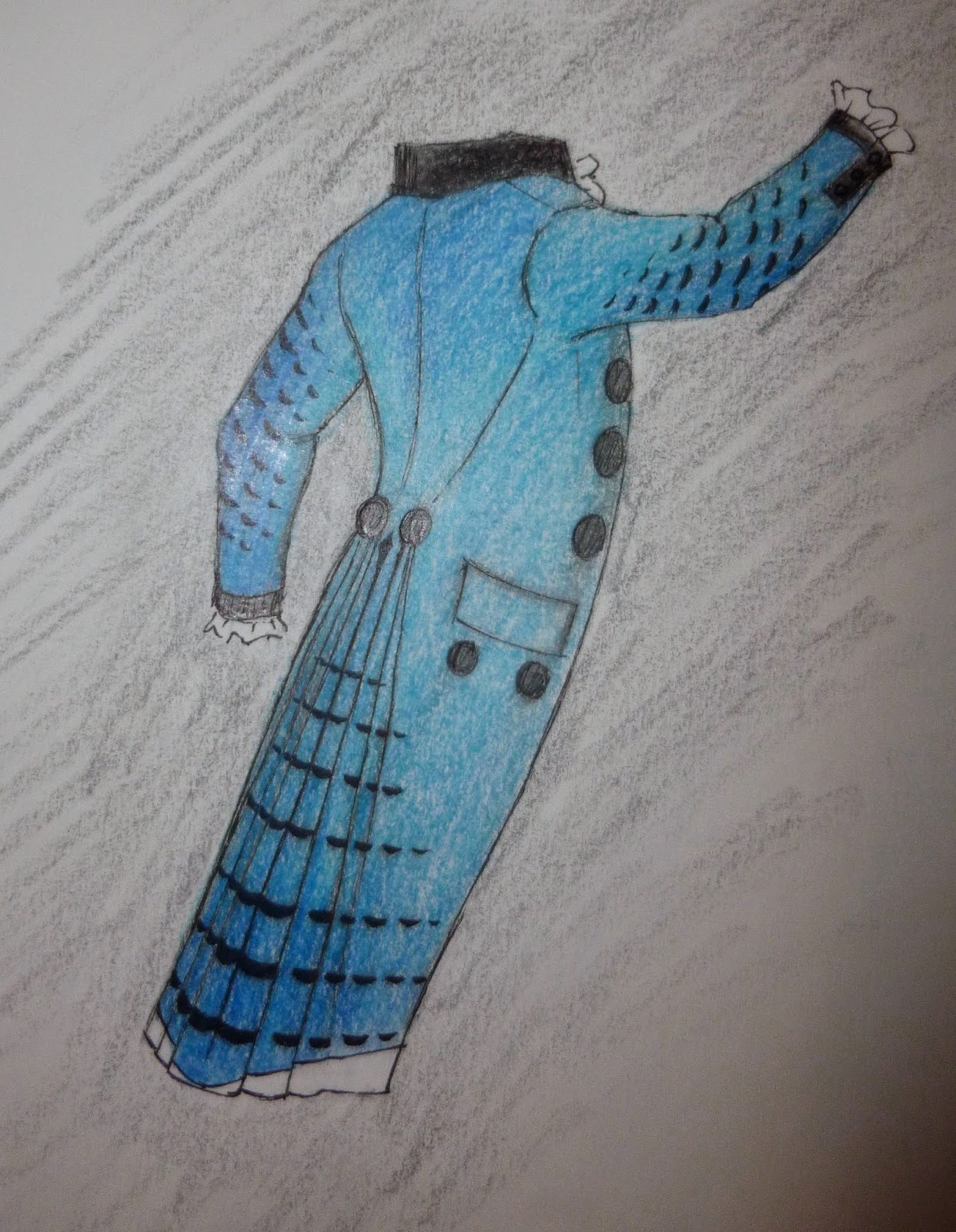 I would make a great deal of late 18th century mourning things.
All these things are everyday clothes, not costumes. I haven't been focusing much on costumes lately.

Since I'm talking about what I want my own wardrobe to be, I feel like I should include this picture, because it sums up a lot of my style goals:
I would also like to learn new techniques, like chenille embroidery.
And making nanduti or tenerife lace. Is this not the most fantastic handkerchief you've ever seen?


10. Which of your projects/costumes are your favourites and why?
Since I've only finished one complete costume, I have to say that my drawstring jacket ensemble is my favourite. I'm also quite happy with my blue and purple mitts.
But my favourite project is actually the one I haven't made yet, because when I'm picturing it in my head it's perfect. Once the project is actually made it has mistakes in it.

1. Tell me about your first costume in all it's awesome and potentially awful detail :D Share a picture if you have one/want to!
My first ever costume was a Mrs. Lovett costume that I wore on halloween in 2010. I was 15 and hadn't actually learned how to sew. I bought a $4.00 dress from a thrift store and made some very crappy alterations to it. I have since torn it apart, because the alterations were truly horrific in their crappiness.

2. How would you describe your sewing "style"? (For example, I'm a night-owl deadline-pusher.)
I am a procrastinating starter-of-many-projects and finisher-of-few. I am also a night-owl.

3. How about your sewing companions of the furry variety? If you don't have pets, a non-essential object you just can't be without. (I'm trying to kick my slurpee habit...) Share a picture!
Alas, I have no furry companions. My parents are allergic to cats. As for non-essential objects, I like to have tea.
4. Do you have a sewing "ritual"? What is it? (I like to watch movies! And by watch, I mean "listen to")
I like to listen to music, or CBC radio. I absolutely cannot work on things while watching movies. If I'm watching something, it gets my undivided attention.

5. How about a sewing "outfit"? (I have a "Serious Dress" that gets busted out when it's time to crunch that deadline!)
Nope, I don't have one of those. I don't care what I'm wearing while I sew, as long as it's comfortable.

6. How does your family/friends take your sewing?
They are very supportive and braggy about it.

7. I'm sure you get a ton of compliments when you're out and about in costume - share your favourite :)
Any compliment where the person doesn't screw up the terminology is nice.

9. If you had any advice for a newbie, what would it be?
Don't be afraid to cut your fabric up and sew with it. It is foolish to not sew with your fabric because you are waiting until you have more experience. How are you going to gain experience if you don't sew things? Yes, you should wait until later to use the super expensive materials, but don't limit yourself to synthetic crap.
Also, don't avoid ironing. Ever. And get yourself a lint brush. The fuzzy red ones with the black handles are good.

And now, my questions for you to answer:

1. What first got you interested in costuming?
2. How old were you when you began sewing? How long ago was that?
4. Do you have any bad sewing habits? If so, what are they?
5. Name one piece of sewing related equipment that you wish you owned.
6. What is your favourite thing about costuming?
7. Which part of costuming do you most dread?
8. Do you sew many everyday garments, or do you only do costumes?
9. How has costuming affected your life?
10. If you had unlimited time and money, what would you sew?

I do apologize for neglecting this blog for the past month. Things have been pretty busy, what with the fashion show and assessment week and catching a terrible cold. I should also apologize to Cait, who gave me a blog award ages ago and I never made a post on it.
I promise I will return to regular posting!
Posted by Vincent Briggs at 15:57 7 comments: