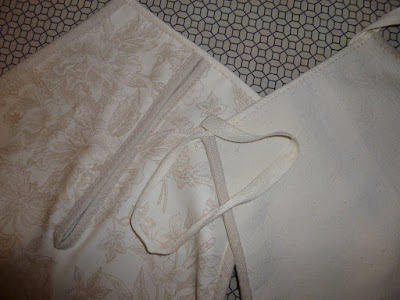 I had hoped to be posting about my embroidered waistcoat by now, but it's still not finished (does anybody know the proper way to attach the interfacing and line the fronts? Please help!!), so this post on pockets will have to do for now.
I've had this smallish piece of light brown cotton toile for quite a while, and pockets seemed like the best thing to make with it. I don't actually have a use for pockets, but they aren't a very big project so that's okay. Perhaps I can make some wizard robes or something to wear them under.
I drew up a pattern based on this pair from the MFA, and cut it out twice in the toile and four times in a soft canvas. (Soft because it has been washed a lot, I think.) Since the materials aren't quite nice or accurate enough to warrant 100% hand sewing, I stitched the toile layer to the front piece of canvas by machine. I drew a 20 cm line down from the centre top for the slit and sewed around that as well. I cut down the line and bias bound the edges. 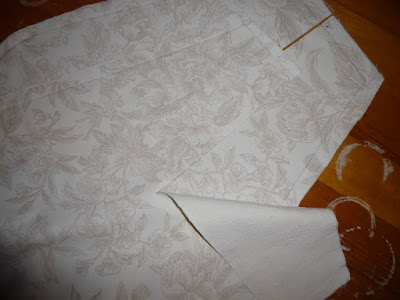 I didn't want to cut a big diagonal chunk off any of my nice linen, so I made the bias tape out of a rather thick and slubby cotton, which was a bit of a pain to sew through. I'm also not sure stab stitching it on through both layers was the best idea, because it came out slightly wobbly and I stabbed my finger a fair amount. All the hand sewing is in linen thread, and the machine seams are polyester. (Horrible, yes, but it's all covered up.) 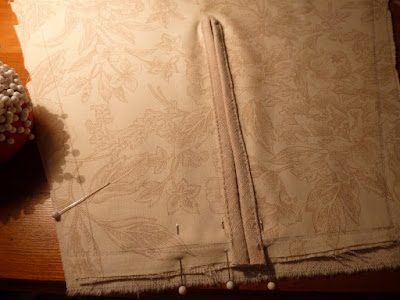 I machine sewed the front piece to the back piece of canvas, and bound the long edges with more of the cotton tape. This time I stab stitched only the front edge on, and folded the other edge to the back and whipstitched it, which was a lot faster and less frustrating.


I hemmed the ends of a piece of cotton twill tape, whipstitched it to the tops of the pockets with some stabbing at the ends for strength, and they were done! 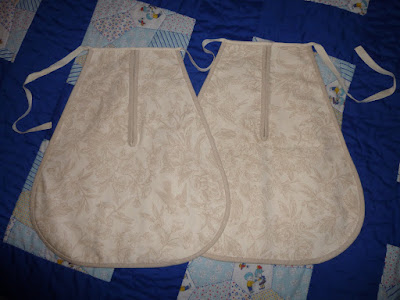 And all in less than 3 days, which is impressive for one so easily distracted as me. The reason I decided to make these now is because I haven't done a Historical Sew Monthly challenge all year, and since I couldn't get my waistcoat done for the Pattern challenge I wanted to have something. So, the facts:

Materials: Cotton toile, cotton canvas, cotton something that I don't know the name of.

Pattern: Drafted by me.

Year: I think they'd work for any decade in the 18th century.

Total cost: $ 0. Everything was stash materials.

As long as I'm posting about pockets I suppose I should mention the other two pairs of pockets I've started, one of which I intend to finish.
Some time ago I began painting a copy of the blue flower pattern from my inspiration pockets, because I really like that fabric, but I decided it wasn't worth the time for something I wasn't going to wear

I'm quite happy with the part I did paint, and plan to finish up the edges and use it for a needle case or something. The cotton ticking it's painted on would be excellent for a needle case.
It's mostly dry-brushed in fabric printing ink, which dries annoyingly quickly and so isn't very well suited to that method.

I don't know if anyone will remember this, but my very first blog post here was about a pair of unfinished embroidered pockets. I started them in 2012, and still haven't finished them, but I will eventually, and having made this practice pair of pockets I will now be less nervous about sewing them up. I actually worked on them this summer, and they're currently this far along:
Once again, does anybody have advice or useful links on interfacing 18th century waistcoats? The 18th century tailoring instructions I've found are rather vague. I've got a layer of linen and a layer of hair canvas carefully tacked all over to the backing linen on the embroidered fronts, but I don't know if this is right or how exactly I should go about attaching the lining to the front edges.
Posted by Vincent Briggs at 20:30 2 comments: