It's another waistcoat! A shamelessly historically inaccurate one, which I am delighted to now have as a part of my everyday wardrobe.
This was a project that sat on The Pile for a long time before I finished it. 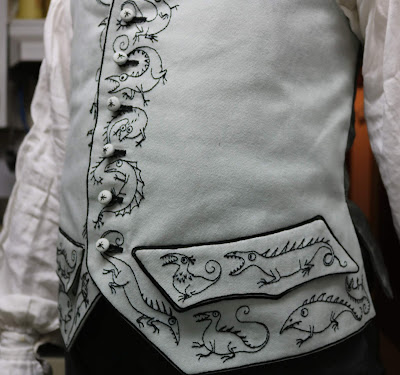 I forget when exactly I started it, but it was at least a year ago.

I started it shortly after I embroidered this monster (which is in this post, so it must have been sometime in 2017) I loved that monster sample so much that I decided I needed an item of clothing with monsters on it.
I traced out one of my waistcoat pattern fronts on some fairly heavy white cotton twill, and began drawing monsters on it in washable coloured pencil. After I'd done the first 4 monsters, I became very dismayed that my tiny waistcoat monsters didn't have the detail and shading of my larger monster, and so I folded it up and put it away. 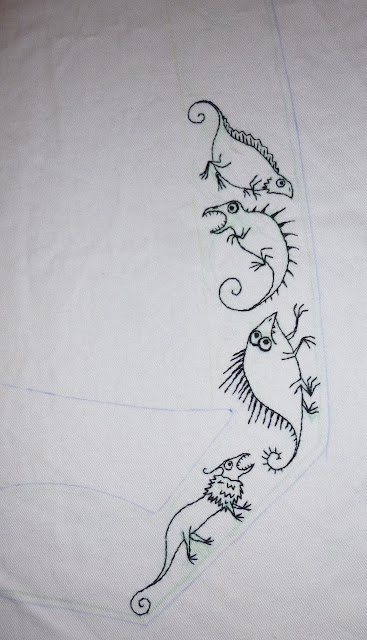 Some months ago I took it out again so I'd have something to do while waiting for the bus every morning. A few weeks later I'd finished all the embroidery!

The monsters are mainly done in backstitch, because I wanted smooth, unbroken outlines. I used DMC cotton embroidery floss.
The black outlines around the edges of the waistcoat are 2 rows of split stitch very close together. I tried doing a satin stitch outline like they did on 18th century waistcoats, but it just didn't work well with the bumpy texture of the twill and the thickness of the 2 strands of floss. Before doing the embroidery on the left side I marked out the buttonholes and outlined them with split stitch too. 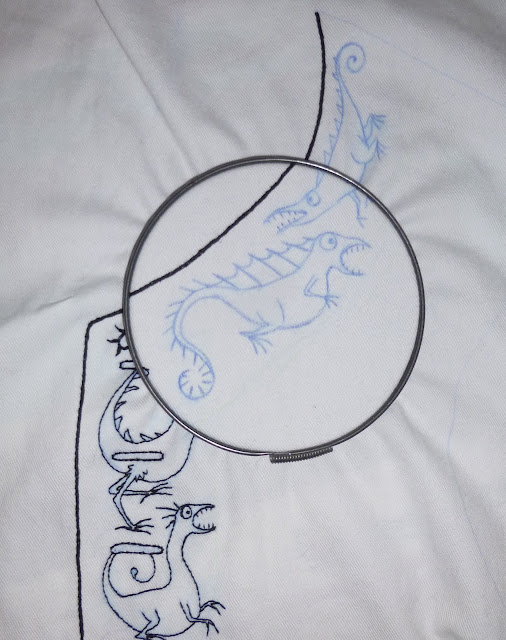 I didn't like the harsh contrast of the black & white, so I dyed the embroidered panel. I used PRO MX Pearl Grey at 3%, and it came out a lovely light grey with a bit of a greenish tinge. 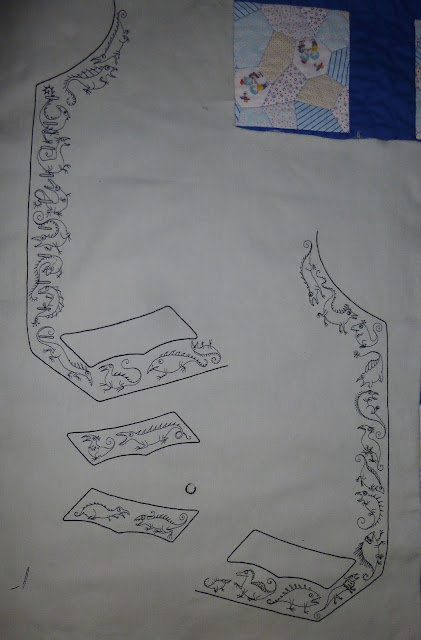 Unfortunately the dye particles didn't all dissolve when I mixed up my dye bath, even though I had put the powder in a small jar with water and shaken it until I saw no lumps.
There were about 8 or 10 tiny specks of BRIGHT magenta on my waistcoat! I wouldn't have minded if they'd been grey, but the grey dye is made of a mixture of other dyes, and it seems the magenta one is the worst at dissolving.
I painted over them with tiny dabs of light grey fabric ink, which spread out a bit bigger than I intended, but it's not too terrible.
I lined the waistcoat in a pale blueish green quilting cotton which I think was from Grandma's stash, and I used some bits of charcoal grey & light greenish resist dyed linen for the back, which I had to piece. The linen was given to me years ago, and I think it was previously part of an art installation.
I did the piecing on the back, the CB seams on the back and the lining, and the seams connecting the two halves of the pocket bags together by machine.
Everything else I did by hand, because the historical construction methods I used for my last waistcoat work so darn well and I love them. 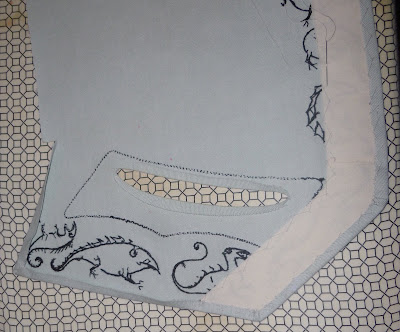 I made buckram interfacing for it by stiffening some cotton muslin with fabric stiffener. I stitched it into the fronts and the pocket flaps, did the buttonholes & buttons, then added the lining. 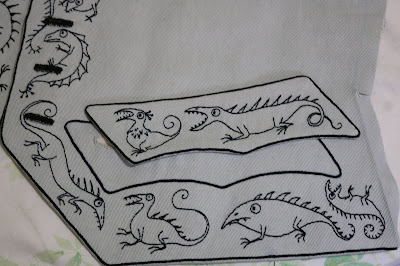 I waffled a lot about the buttons. At first I thought I'd just embroider little outlines around them, but a sample proved to be terrible and wonky. Then I thought maybe I'd do Dorset wheels instead, and I even dyed a length of linen thread along with my fabric so I could do that, but in the end I settled on matching covered buttons with little starburst patterns embroidered on them. I used half inch bone button molds.
You see buttons with little starbursts on them on quite a lot of late 18th century waistcoats, and on such tiny buttons there isn't really room for much else.
With the fronts finished, I just needed to attach the back. 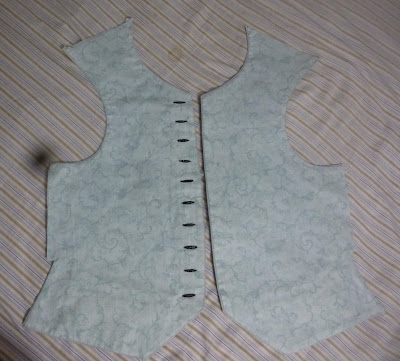 Ugh, that darn speck in my camera. 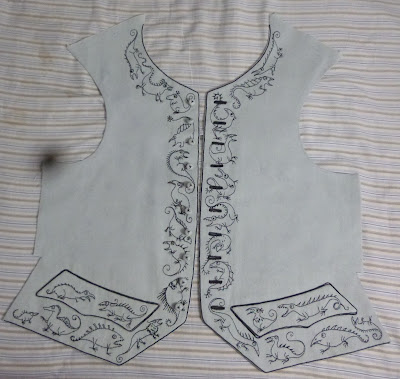 I basted the side and shoulder seams to check the fit, and I'm very glad I did because the shoulders were so wrinkly. It was terrible. The side seams were fine, but either my pattern was old and ill-made or my shoulders have grown since I first drafted it. Or perhaps both.

I sewed the side seams and tried the waistcoat on so I could carefully smooth and pin the shoulder pieces into a position that fit nicely. I had to piece big wedges into the shoulder seams, but I am not troubled by this. Triangular bits pieced into the shoulders are something a lot of extant late 18th century waistcoats have, though I suspect this has to do with cutting layouts and saving fabric rather than fit. 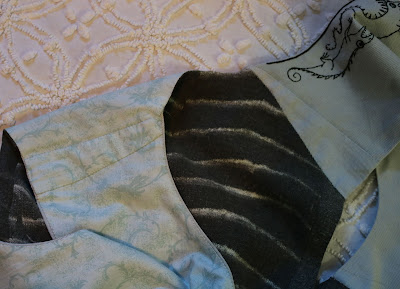 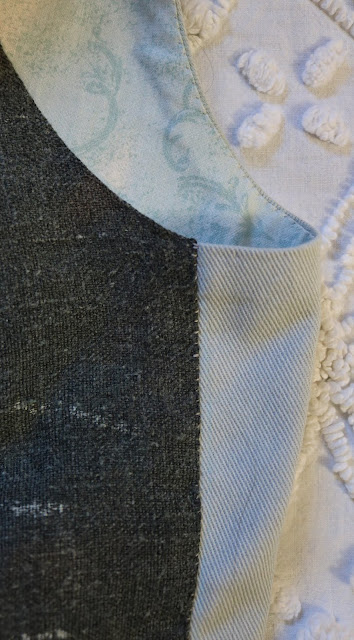 After I'd finished doing that, I popped in the back lining, and an extra wedge of lining to cover the shoulder bit. 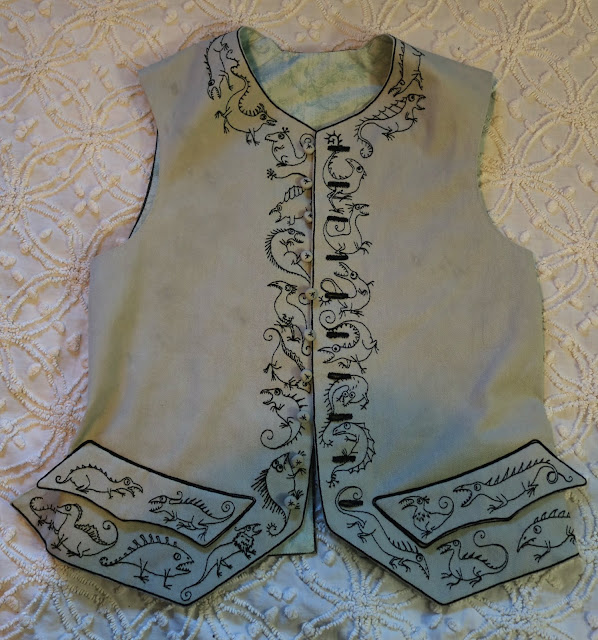 Finished!
You can see some of the splotchy bits where I painted over the magenta spots in the above photo. 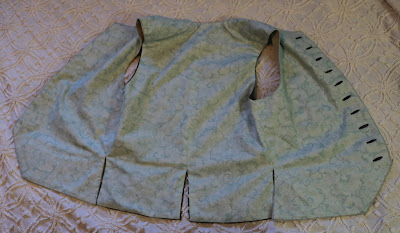 I forgot to take a picture of the back until after I'd returned Mama's good camera, so I only have a terrible photo of it. 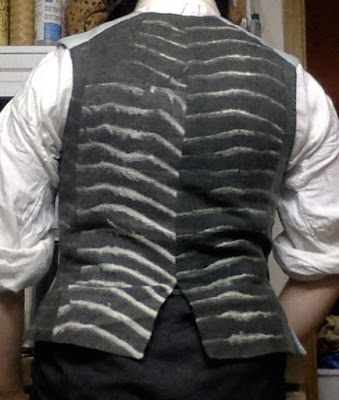 It's Elyse! (The one on the top left with the 3 little antennae.)
The one on the bottom corner with the fluffy mane is called Fancy Geraldine. I don't think any of the other monsters have names, but I'd have to look through my sketchbooks to be sure.

I am very pleased with all my tiny monsters. 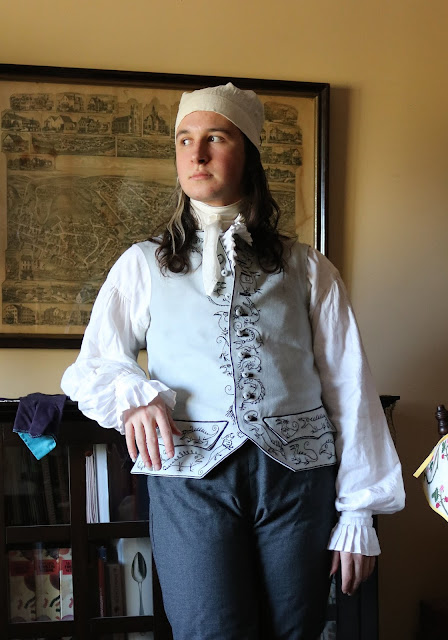 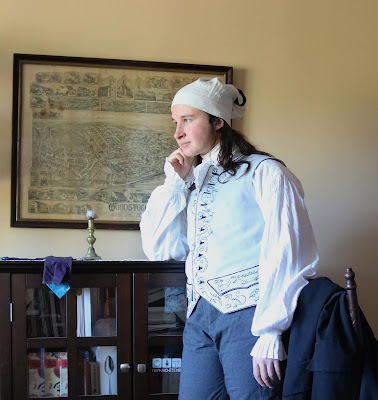 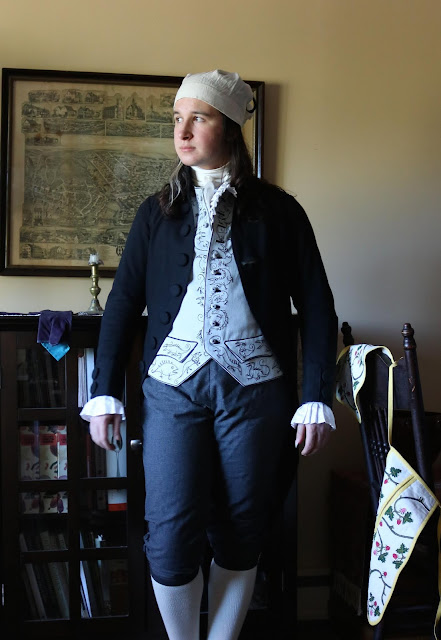 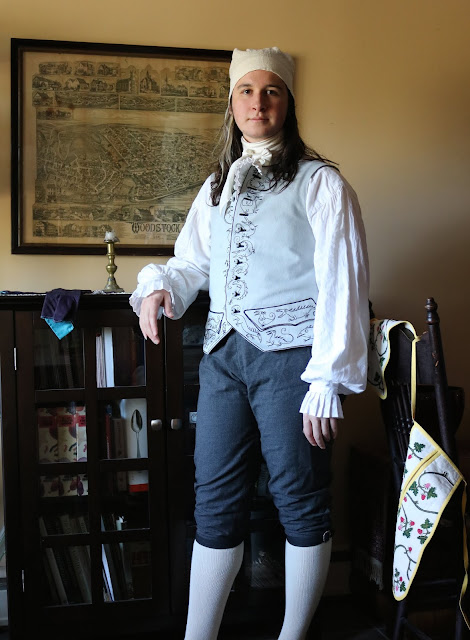 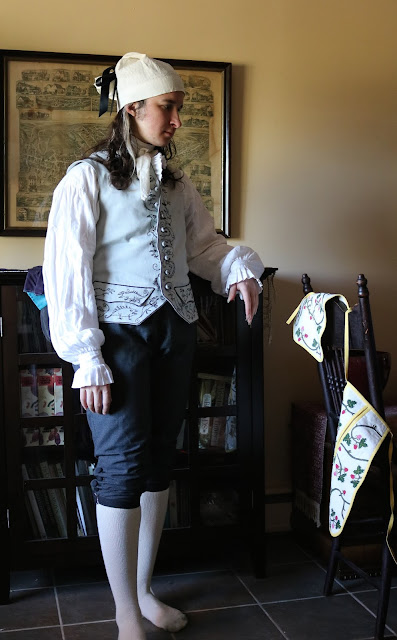 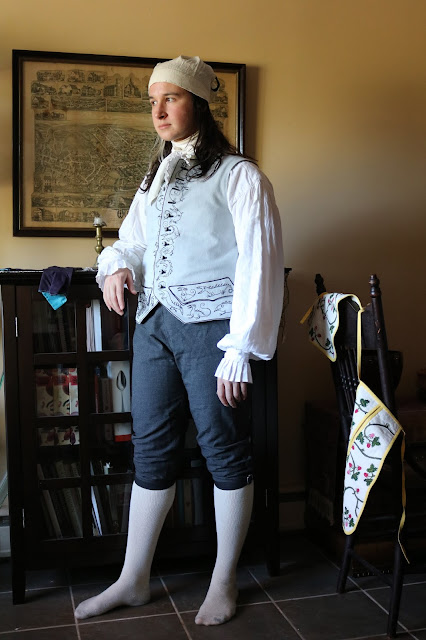 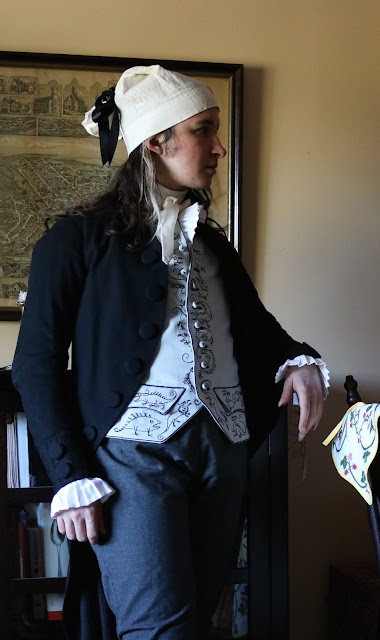 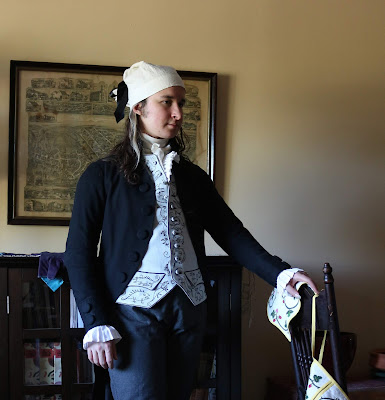 Next post will hopefully not be about a waistcoat, because I really need to make more shirts and other non-waistcoat things. I did recently get a beautiful and very inspiring waistcoat book though...
Posted by Vincent Briggs at 14:07 9 comments: