Update: I was a fool! I am sorry! Please, dear slippers, forgive the title of this post! I love my monster slippers very much now and wear them all the time!

Well, maybe awful is a bit harsh, but these are definitely not my best work and I don't like them much at all. I made them for felting class, and they aren't symmetrical, or evenly dyed. 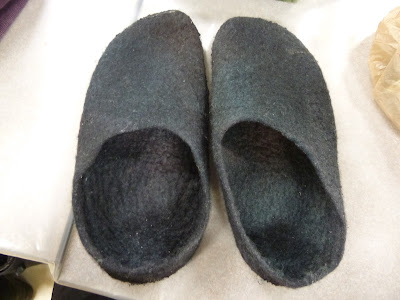 One's a bit tighter than the other. I tried to dye them brown, but I must have put too much dye in the pot because they went black. 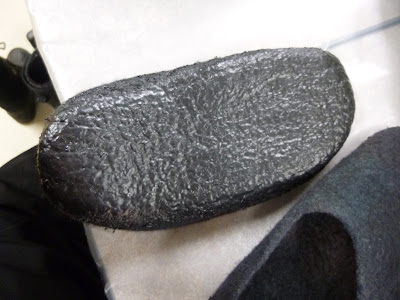 I put plasti dip on the bottoms, so they have something resembling a sole, and will wear much better than just plain felt.
I had to embellish them for the assignment, and I thought them too ugly to put much more work into, so I added eyes and a top row of pointy teeth. 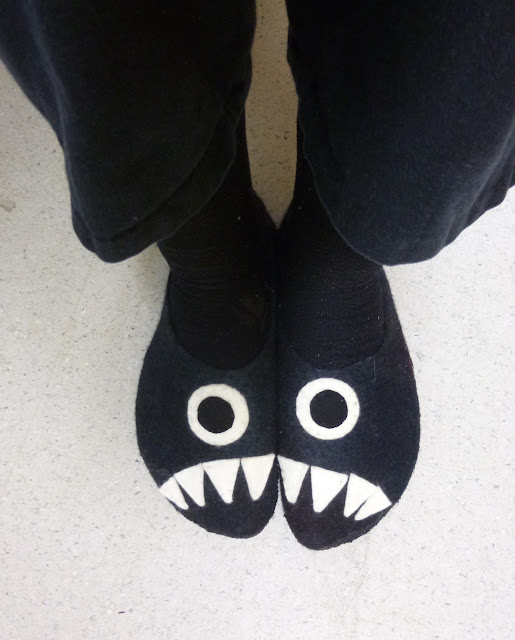 If I make any other felted footwear it'll be taller, because I don't like the shape of these.
Posted by Vincent Briggs at 17:56 2 comments:

I have made a hat! 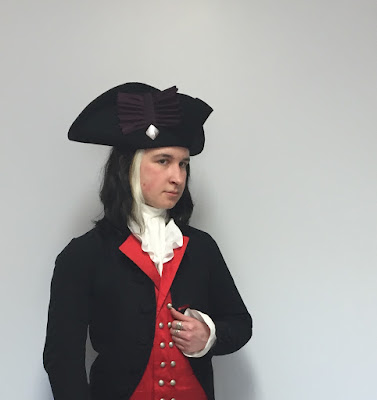 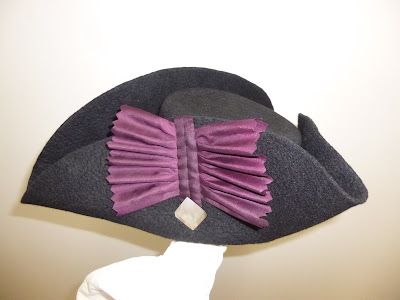 I was aiming for the general look of the hat in this fashion plate.
As far as I can tell, the one in the fashion plate is this shape, with the edge folded up in back being much longer than the front two. (I have some more extant hats in the same style on this pinterest board.)
Mine is wet felted merino fleece, and I made it for a hat assignment in felting class.

The pattern is quite large (about 2 feet across, I think) to account for shrinkage. 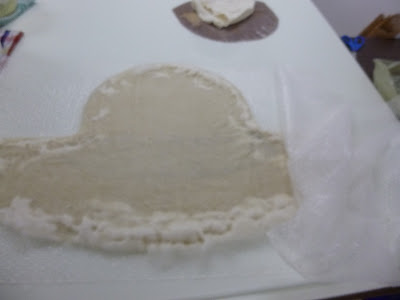 Once the hat was sufficiently felted I dyed it with acid dye.
I had failed to remember while I was felting that the tops of all the extant hats are flat, and so I had to do some reshaping. I dampened the hat and pulled it over a coffee can, and managed to mash the domed top down into a nicely flat one. I also had to stretch the band part over a paint can, because it had shrunk in the dye pot and was now slightly too small.
I stiffened the whole hat with watered down fabric stiffener. I'm not sure what the historically accurate method would be, but this worked quite well.
I used fabric stiffener for the trim too. I dyed a piece of white silk twill, and then painted it with slightly thinned stiffener and let it dry. I'd never used fabric stiffener before this project, and I was quite pleased with the results. The silk went crisp and papery.

I pleated it up, folded another strip of the material for the bit that goes on top, and added a mother of  pearl button from my stash. The hat in the fashion plate has what appears to be a diamond shaped steel button, and this was the closest thing I had. 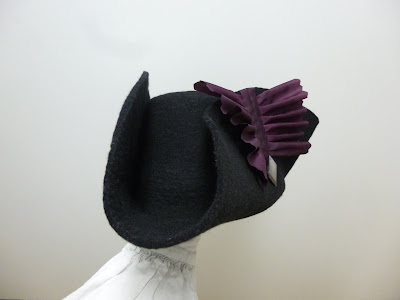 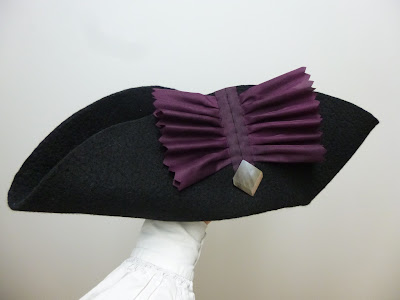 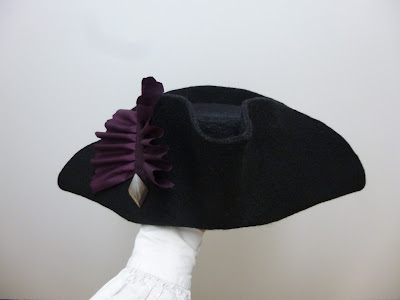 It's done! I finally have a hat!! It still needs a lining, but I can add that later. 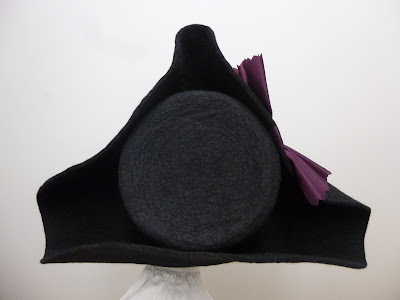 It's not perfect, nor entirely symmetrical, but for a first attempt I think it turned out very good and I am proud of it! 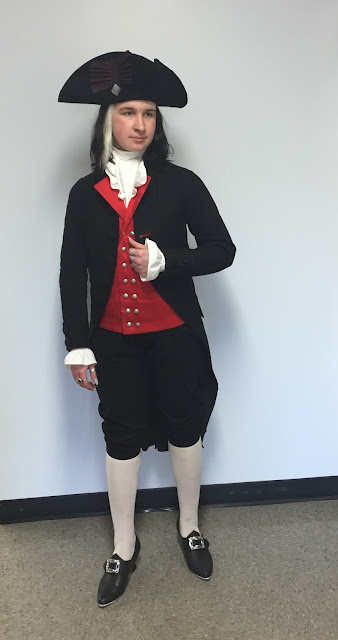 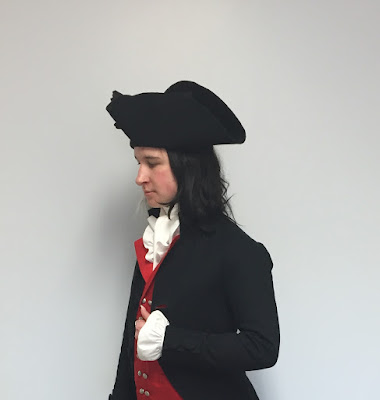 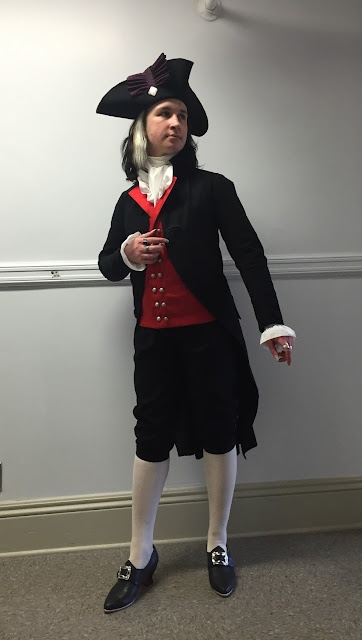 All the photos here of me wearing the hat were taken by Denise Richard, who is my felting teacher. 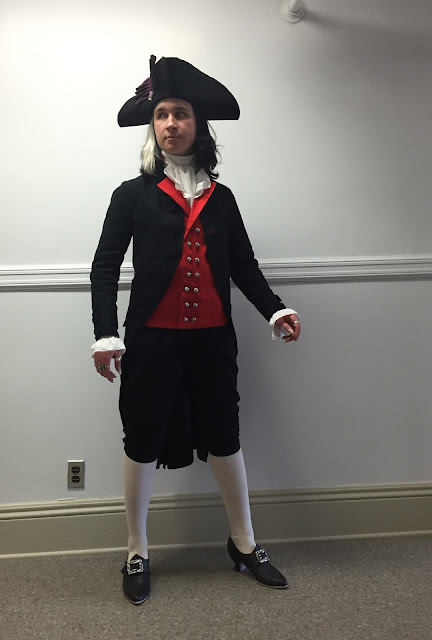 I quite enjoyed making this and I want to make more hats!
Posted by Vincent Briggs at 14:24 2 comments: