Update: I've made a couple of alterations to this shirt, to make it a bit better and more historically accurate. I shortened the cuffs and added another buttonhole to the other side, so they can fasten with sleeve links, and replaced the ruffles.
As I mentioned in my year in review post, I really want a 1730's outfit. Since February's HSM challenge was Under, I started with the shirt. I want to challenge myself to be more historically accurate than usual with this outfit, and the shirt is not 100% but I think it's pretty darn good.
I found the collection of shirt pictures on this page to be quite useful references. The buttons are different from the ones I've done on my later shirts, and I wanted to get them as correct as possible. There aren't many extant shirts from the early 18th century, but we're given a pretty good view of the buttons on this c. 1700-20 one. Judging by the thread covering on these and the profile of the buttons on the shirts shown in the linked page, my best guess for what these are is Dorset Knobs.
(Side note, LOOK at how fine the fabric of that shirt is! If only I could get linen that finely and tightly woven! I have to make my buttonhole stitches 3 times longer than those ones to keep it from unraveling the edges, and I simply cannot manage gathers that tiny.)

I found this diagram on pinterest that shows a technique which looks like the one used on the buttons on the extant shirt. 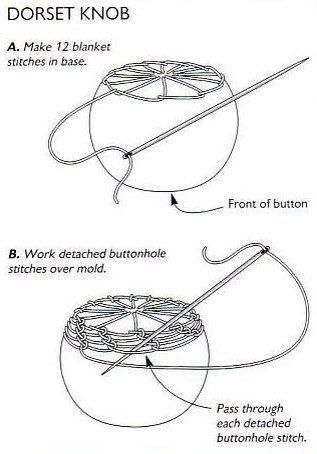 The antique Dorset knob buttons on this website are listed as being made from sheep's horn, fabric, and thread.

I made mine using the 3/8" bone molds from Burnley and Trowbridge. I covered them in fabric the usual way, and used the pointy gathered side as the top of my button. I cut a long piece of heavy linen thread for gathering the cover, then pulled it through to the back and used it for the thread covering. 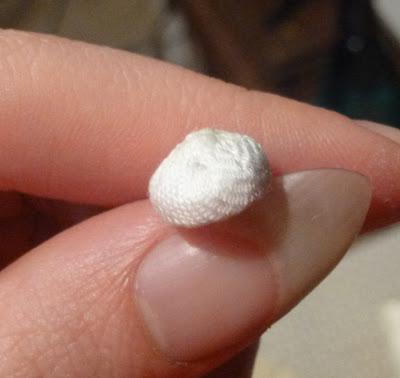 I made the blanket stitches around the bottom, and though I didn't count as I went, all four came out with exactly 12. 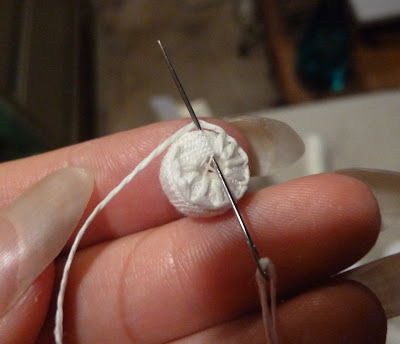 For the detached buttonhole stitches I switched to a small tapestry needle. I did them until the hole at the top of the button was down to a couple millimeters across, then stitched it shut and pulled the thread through to the back side again. 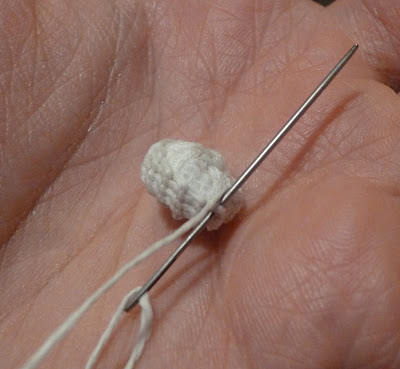 I m so very pleased with them! I did one sample one first, then cut the covering off it to re-use the mold, and did the 4 for my shirt. 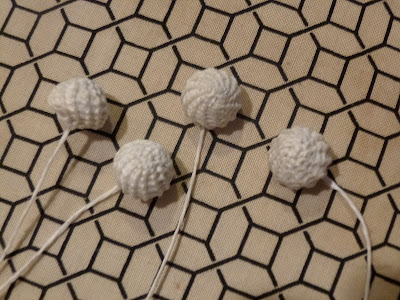 They remind me of pineapple weed flowers, but Mama thinks they're more like sea urchins. 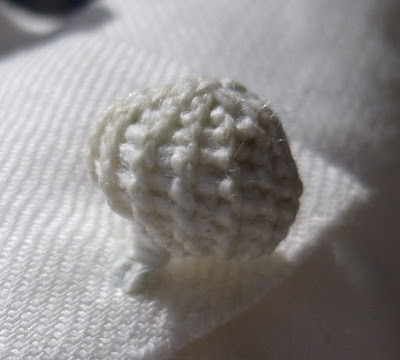 I sewed them onto my shirt using the same thread they're covered with. 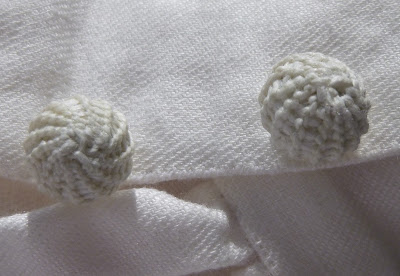 The pattern is mostly the same as my other shirts, with some adjustments. I made the collar shorter, the cuffs much narrower, the main body pieces and underarm gussets a tad bigger, and the shoulder strip narrower. 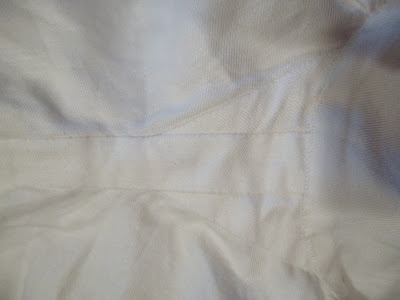 All my shirts up until this one have had facings on the front, but for this one I cut and narrow hemmed the slit, and added a heart shaped reinforcement. Since it's a tiny detail that doesn't show up in any portraits or extant garment photos I've seen I have no idea when it first started being used, but I like it. The only extant examples I've seen have been on later shirts.
There are 6 lines of machine sewing in this shirt (the side seams, sleeve seams, and shoulder seams), and the rest is all done by hand. I folded the edges of the underarm gusset outwards instead of inwards when I finished them, and it made a much cleaner arrangement!
I also finished the armhole seam with folded tape from my smallest bias tape maker. I got the idea from this post, but had no woven tape that was the right size.
The buttonholes are done with DMC cotton pearl, which is the best behaved thread for the purpose out of all the other ones I've tried so far. (Sadly my local fabric store doesn't sell stuff specifically for hand worked buttonholes.) 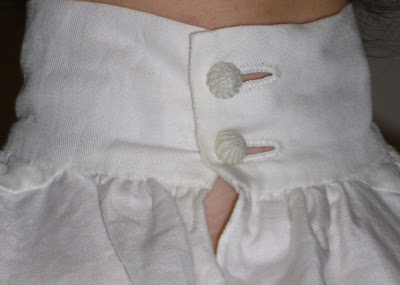 Edit: I also hadn't noticed that most 18th century shirts fasten with sleeve links, but I have altered the cuff to fasten with them. I made mine by squashing a large metal jump ring into an oval, and adding two metal shank buttons to it.
I replaced the horrible scratchy lace ruffles with new ones made of cotton organdy, using the Burnley & Trowbridge tutorials on rolled hems and rolled whip gathers.
Here is the finished shirt! 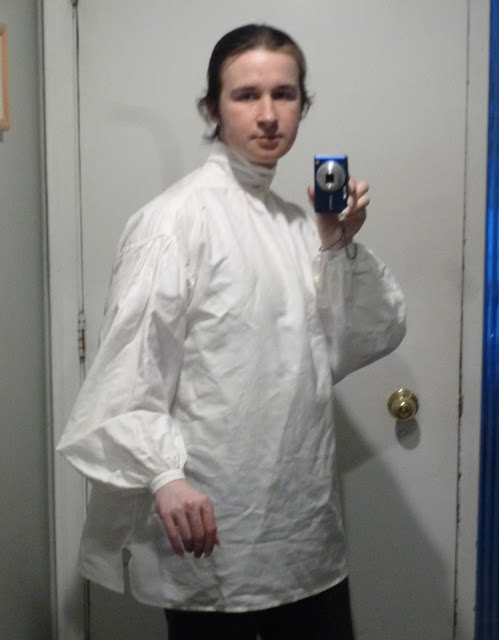 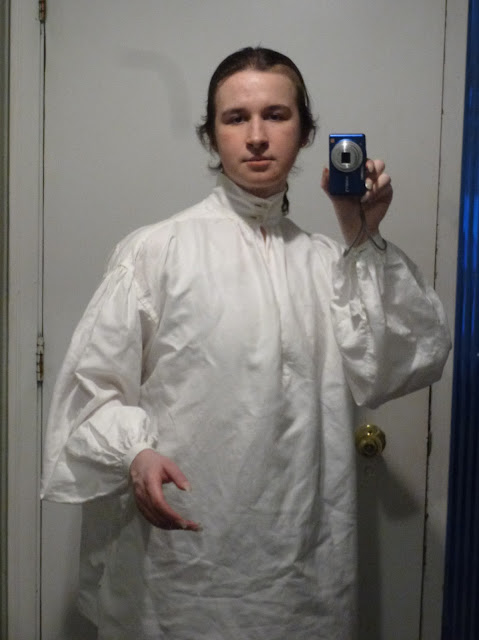 I made it without ruffles so that lace ruffles can easily be tacked on and removed. Sadly I don't have any good quality lace in my stash that's the right width for such a shirt, so I have temporarily added the most suitable bits I have until I can get better stuff. 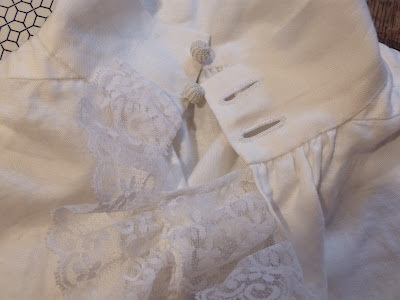 The cuff and collar pieces don't match, and both are some sort of synthetic, but it looks good from a bit of a distance. And I now have a good reference for just how long the lace pieces should be. (The cuff one is a great size but the bosom slit one could stand to have a few more inches gathered into it.) 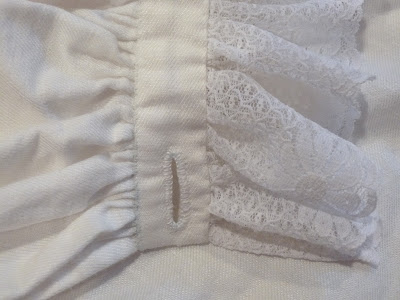 Because this is my first ever shirt with lace ruffles, I put on some historical makeup and took a bunch of photos. (My attempt at hair was not very successful, but someday I will hopefully manage the soft, loosely arranged side curls of the 1730's.) 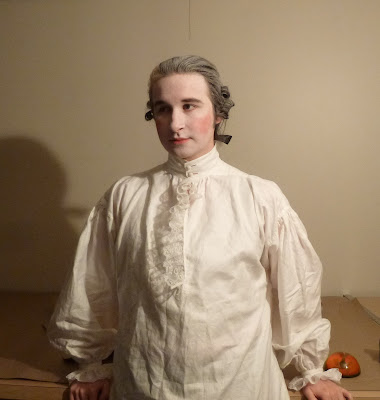 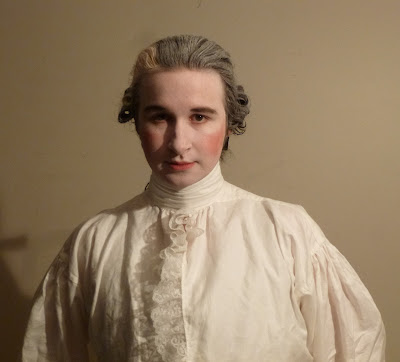 The challenge: #2, Under.
What the item is: A man's shirt
Material: Plain white linen
Pattern: My usual shirt-piece dimensions, adjusted to suit an earlier style
Year: 1730's for my purposes, but it could go a bit later or earlier. Actually it'd probably work fine from the late 17th century to maybe the 1760's or 70's.
Notions: Four 3/8 inch bone button molds, cotton thread, silk thread, linen thread
How historically accurate is it? I'm not entirely sure, maybe 80%? It has only 6 lines of machine stitching, and is all hand finished. As far as I know the cut and the buttons are correct. I'm not so sure about the heart shaped slit reinforcement though. The materials are the best I could manage.
Hours to complete: 37 for the shirt itself, 40 after hemming & adding the lace.
First worn: Feb 27th/2018, for photos
Total cost: About $16 (Canadian) I think (The linen was on a buy 1m get 2m free sale!) 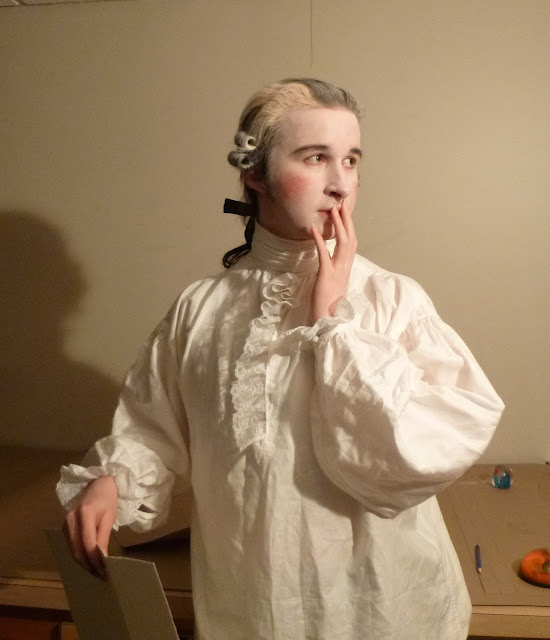 And here are a few pictures with the Beardsley waistcoat, because with all that embroidery it doesn't look quite right with solid fabric ruffles. 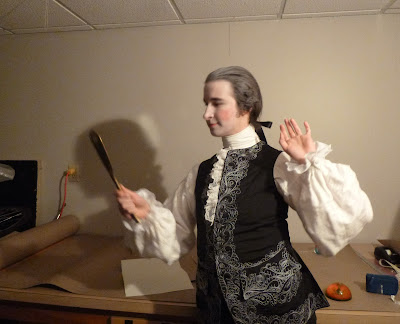 Which reminds me, I still need to unpick the button covers on that waistcoat and re-do them correctly... 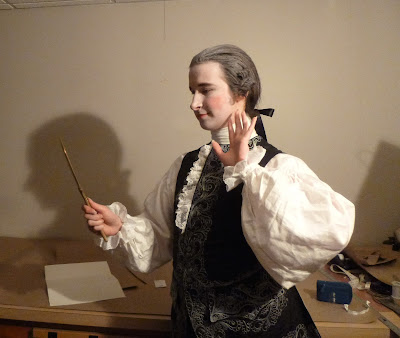 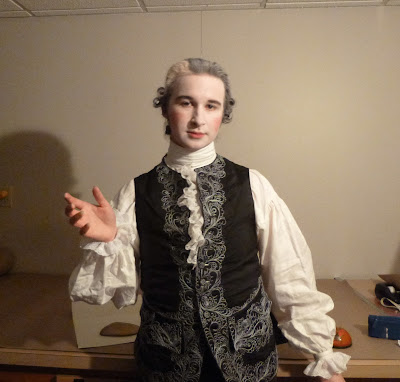 I'm wearing these with the neck stock I made years ago, but I need to make a new one. The fabric isn't fine enough, and with the button closure in back it doesn't go tight enough (it's pinned in these photos). And I have a stock buckle now, so I can make an adjustable one! 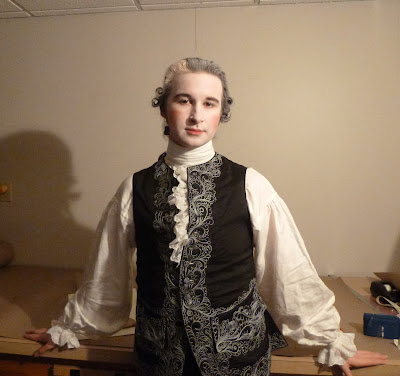 Even though I'm dissatisfied with the the lace, I have no such complaints about the shirt itself!
Posted by Vincent Briggs at 16:15 9 comments: