I'm not sure if this is historically accurate enough to be called a banyan, but if not it's still pretty close. 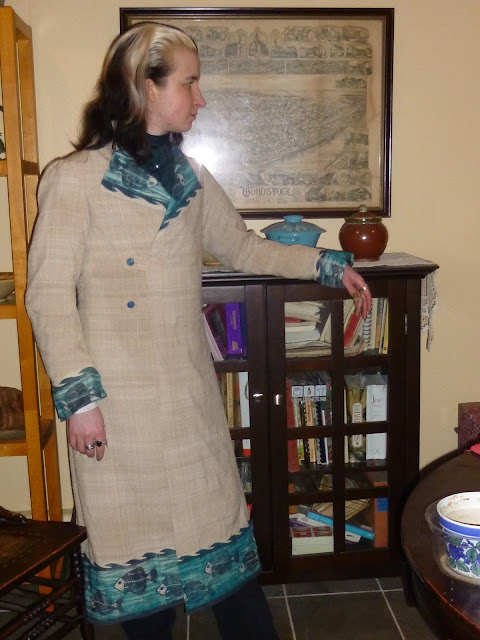 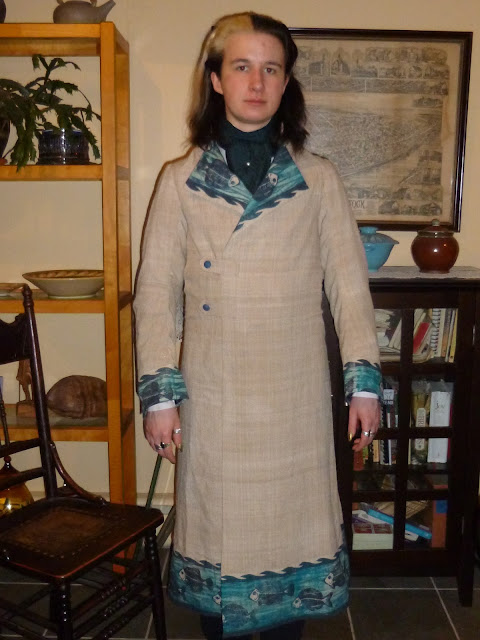 For print class we had to block print a border design and sew something with it. It had to be done in at least 2 colours, with the lightest being printed first, and then part of the linoleum block carved away and the next colour printed on.
I did a skeletal fish design with waves, in 3 colours. (The design in the above photo is being printed with ink, but for my fish print I used dye paste.)

The dye paste really didn't want to go on evenly, so it's a bit patchy.

I based my pattern on several different extant banyans/dressing gowns. The edges of the panels go straight down, so that the bottom corners are all right angles and the border design can be applied nicely.
For the main fabric I used what appears to be some sort of raw silk from my stash. (It smells like silk and has a squeaky texture, so I'm quite sure it is, but I forget where it came from.) The fish are printed on a fine cotton. 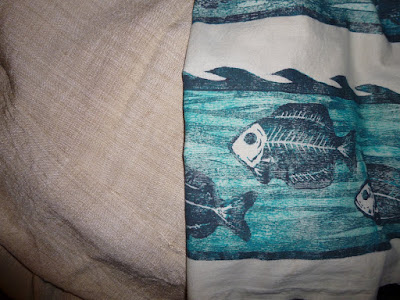 It's mostly machine sewn, with some hand finishing where necessary.
The only interfacing is in the collar, neckline and button tabs. 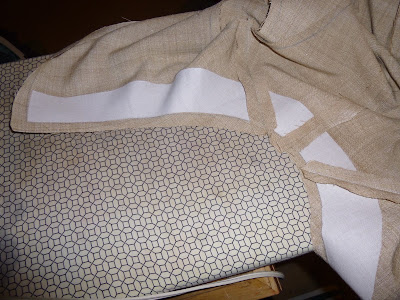 It's lined to the waist in a blue-green rayon bemberg, and a narrow facing of the main fabric extends all the way to the hem. These are all turned in and hand sewn to the inside. 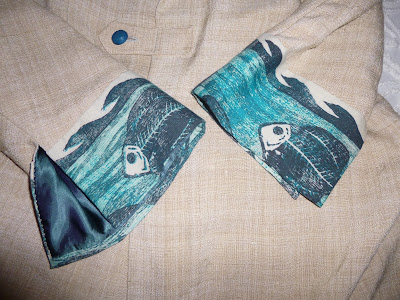 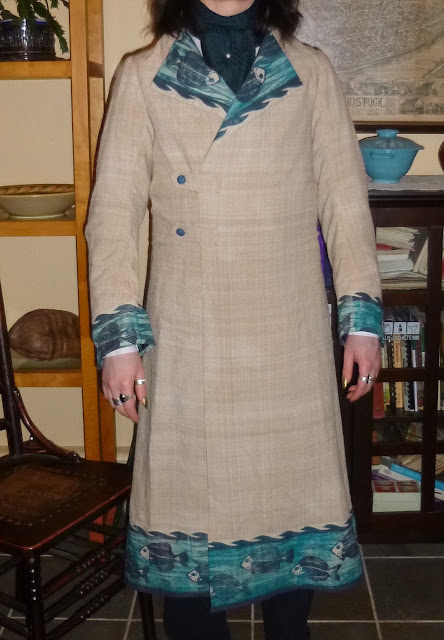 I like it a lot more than I thought I would! It's quite comfortable, and doesn't keep coming undone like bathrobes that tie shut do. 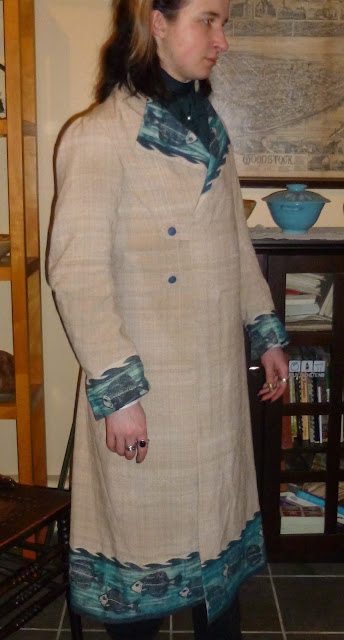 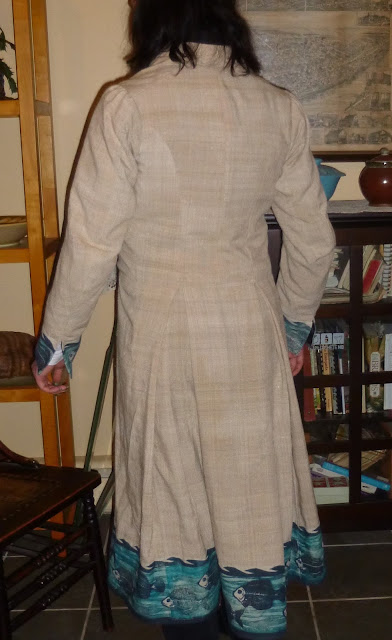 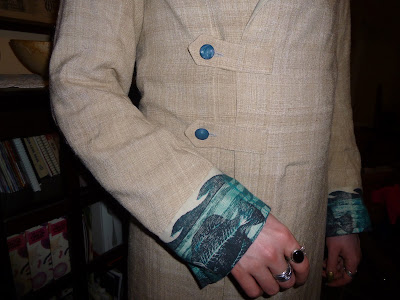 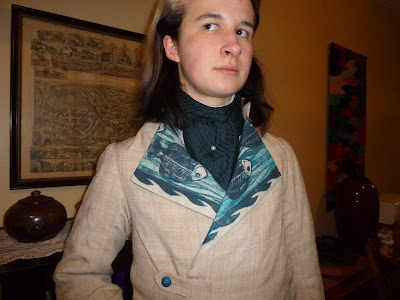 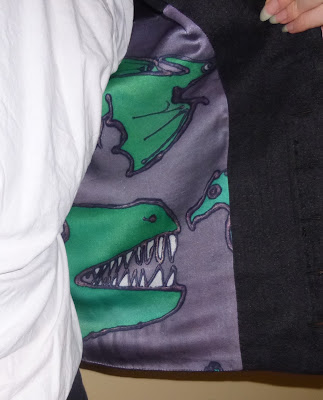 Most of you probably don't know this, but I do a lot of really crappy dinosaur drawings. A LOT. My best friend and I have a blog called Shitty Dinosaur Drawings, and I post on it quite often.

Since we did silk painting in surface design class last month, I did a bunch of terrible dinosaurs on a piece of silk satin.
Most of my outlines came out a little bit too thick, but at least the dye didn't bleed over them.
It needed to be a lining for something! So I made a waistcoat. It's a plain black dupioni waistcoat, from a 1790's-ish pattern.
There wasn't quite enough dinosatin for a complete lining, so I had to piece a bit of black satin to the tops of the front pieces. 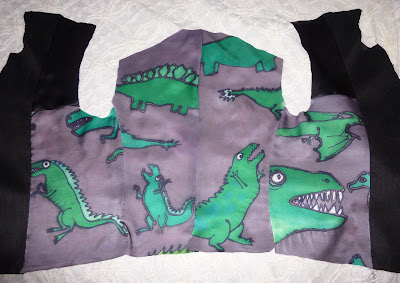 Several dinosaurs lost their faces in the cutting. 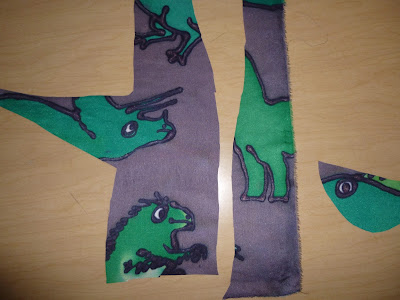 It's mostly machine sewn, with the hem and armholes finished off by hand. 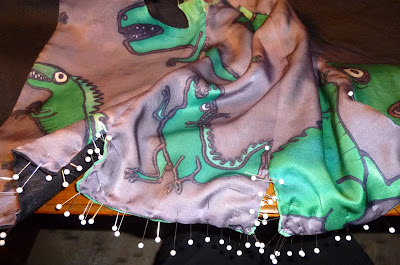 I used small aluminum buttons of unknown origin. The plating is wearing off, but they look okay from a distance. 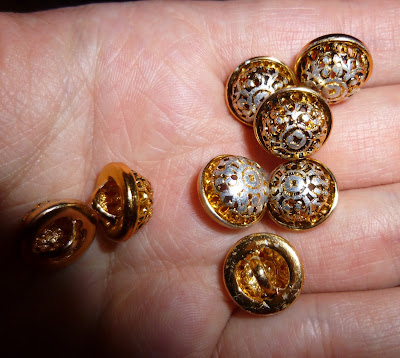 The back is a bright green raw silk from the stash, and since there was already nothing historically accurate about this garment, I added a small appliqué of another silk dinosaur I had drawn earlier on my sample piece. 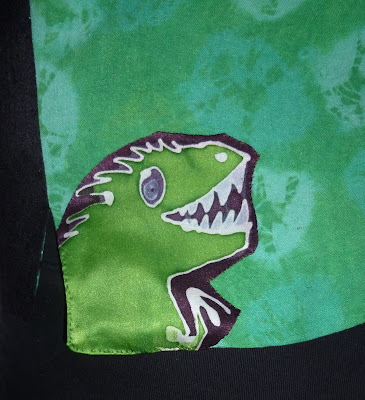 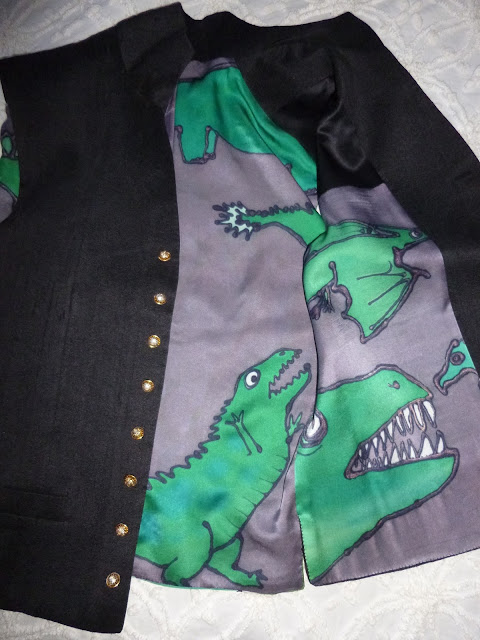 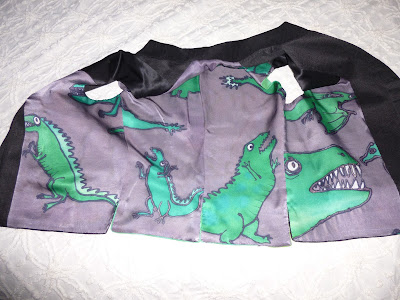 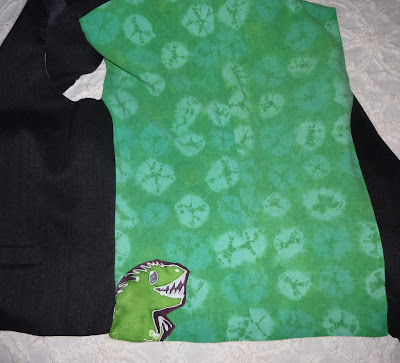 Sadly, it has some fit issues. It's too narrow in the hips, comparatively baggy in the upper back, and gapes way too much around the armholes. This causes it to ride up and wrinkle in the front, which is very annoying.
It's probably because I foolishly used a pattern from the fashion show that was fitted to one of my models, and didn't alter it enough. Oops. I also didn't interface the front enough, so it's definitely one of my less good waistcoats.
I will hopefully take in the seams at some point to make it fit better. 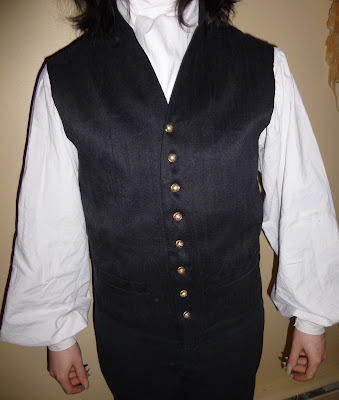 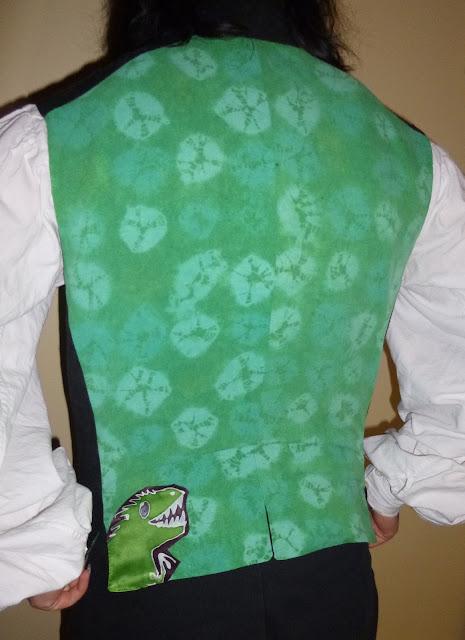