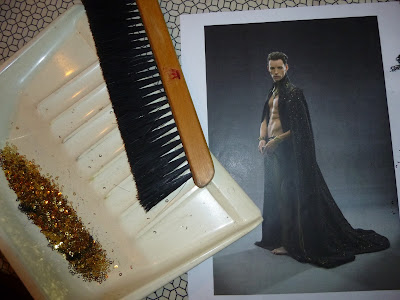 It's a robe worn by the character Balem Abrasax in the film Jupiter Ascending, which I highly recommend watching because the visuals are stunning.

This particular costume doesn't get much screen time, and you can't see it very well in the movie, but the promotional pictures are amazing.
My friend Naxius is the one who commissioned the costume, and I've been working on it for about 3 months. (If you're from the maritimes you may recognize him as the guy who cosplays Loki.)

(All 3 of the above images are from the lookbook website linked earlier in the post.)
I didn't take a picture of all the fabrics together but it's made of a gold sequined material with black chiffon over top of it. The lining is a dark gold satin.
I drafted a basic block and had a workable pattern after 3 mockups. It's got these weird shoulder pieces, and the collar comes up from the tops of the panels instead of being a separate piece.
The lines of stitching pictured here are stabilizing lines because the sequin fabric is, unfortunately, a one way stretch knit. It was the best looking gold sequin fabric he could find, so we had to make do. The satin for the lining also has a bit of stretch to it, and all 3 fabrics are synthetic. (And yes, I am still friends with this person.)
After I sewed a million parallel lines on the 8 panels, 2 shoulder pieces, and 2 gargantuan sleeves we basted the pieces of chiffon over them. Nax helped a lot with the basting because it's so time consuming, and I think he actually ended up doing more of it than I did.

I interfaced the bodice with fusible interfacing, ending it a bit below the waist. I added another layer around the collar but I wish now that I had put even more layers of interfacing in the collar & shoulder areas. 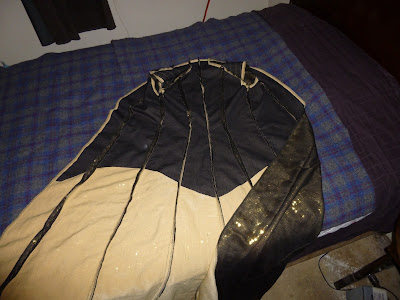 I didn't get pictures of the lining but it looks pretty good for being made of such an evil fabric. I covered the centre front panels and the tops of the collar bits with a layer of chiffon to act as a facing. I also added 2 pockets for him to keep his cellphone and money in.

Balem wears a fantastically intricate gold collar throughout the film, and here you can see Nax's half finished thermoplastic version. I'll do another post on this costume sometime in the future and it'll have a good picture of the finished collar.
Because the original costume has a sprinkling of gold square sequins on the outer layer, I sewed a whole bunch of individual square sequins on with invisible thread. I didn't have time to do the whole thing but it'll be evenly covered eventually. Nax is planning to help with this.
Because the fabric doesn't iron very well, especially when you have to use a low heat setting to avoid warping the sequins, I whip stitched the seam allowances down in the bodice part of the robe. Once again I didn't have time to do the rest, and will have to go back and finish it later.

I also sewed some cotton batting into the shoulder area to act as a slight shoulder pad. I wish I had used heavier synthetic batting, but I didn't realize I had any of that until after. I'll probably end up re doing the shoulders anyways. 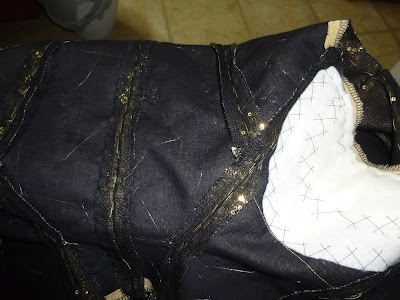 I sewed the lining in place, serged around the collar edge to reduce the bulk of the seam allowances as much as possible, and tried my very best to make the ridiculous sleeves cooperate.

I was so busy that I didn't take as many in progress pictures as I usually do, but I'll try to photograph more of it when I go back and make corrections. Despite having started 3 months before the deadline we ran out of time, and some things had to be rushed. Besides stitching the rest of the loose sequins and seam allowances I need to do a better hem, probably reinforce the shoulders more, replace a row of trim on one of the sleeves because it has 2 factory flaws in it (which I didn't notice in time. Grr), and fix the sleeve caps because what the hell do you do with the lining when sewing in a sleeve with a slit?
I'm probably forgetting something but anyways, here are some photos of him wearing it at Hal-Con! Taken by Akemi Productions. 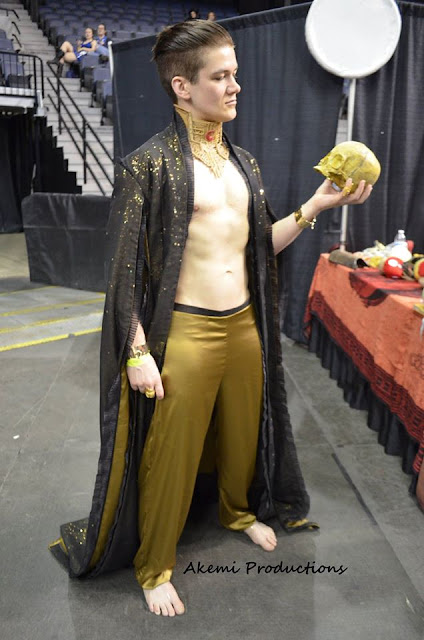 These pants are very, very last minute. I patterned them at the same time as I did the robe but didn't sew them up until the night before the con. We didn't have time to put the pyramid studs on the waistband. Oh well.
Someday the whole costume will be finished and perfect and then we'll have a photoshoot! I'm not looking at those sequins for at least another week though. 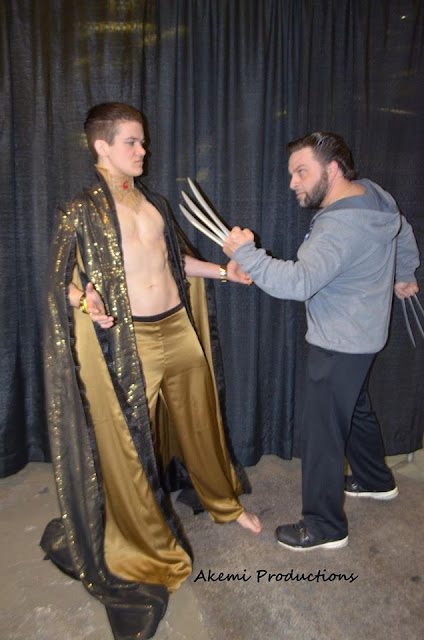 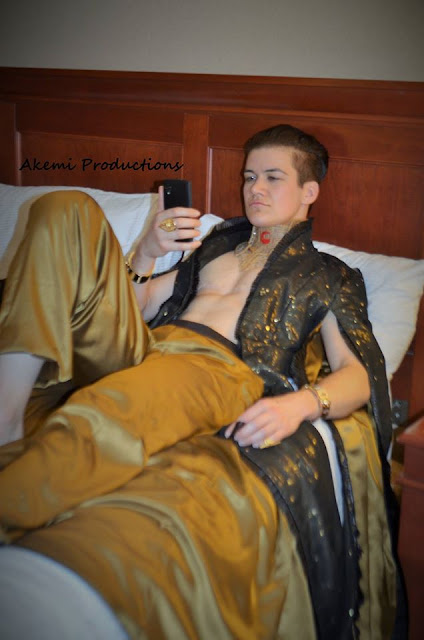 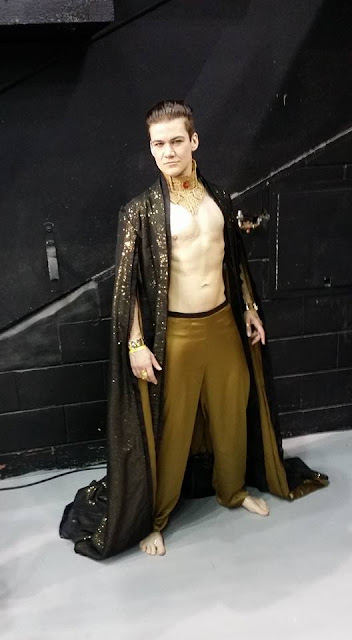 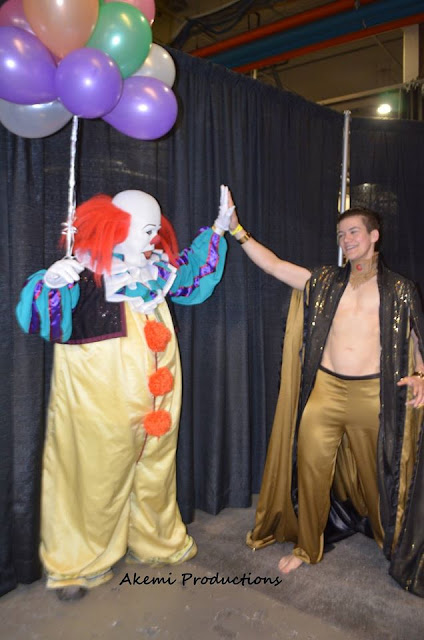