This post is a bit overdue, as I finished these things at the beginning of the month.
Some time ago I was hired (by my teacher, who does a lot of theatre commissions but doesn't sew) to make 4 brown suits for Satellite Theatre.
They were for a play called Grum, and I don't know much at all about it besides the fact that it's about a guy named Grum, and it's all miming with no dialogue.
The theatre had been rehearsing with this worn out and icky old suit, and they wanted a really close copy of it.

I took a pattern from the old suit, and was very lucky to get a fairly similar brown striped polyester suiting. (Apparently it's a really bad year to look for anything menswear related and brown.)

The character starts seeing multiple versions of himself at some point in the play, so they needed a suit for him, and 3 more for the other cast members. They also needed an extra pair of pants for the main suit.

The 2 actors and 2 actresses are all different sizes, and I've never met any of these people in person because they live in a different city. I had to adjust the patterns by referencing their measurement sheets (which weren't even complete! No shoulder measurements!!!) and a photo of each person in tight fitting clothes so I had an idea of their proportions.
Thankfully the suits all ended up fitting reasonably well.

I sewed them at the college on one of the industrial machines, which was nice. I like the industrial sewing machines very much.
They aren't the most high quality of suits, as I was working on a budget, and to a very strict deadline. But all 6 pockets in each jacket are functional, and 2 pockets in the 3 duplicate pairs of pants, and 5 pockets in each of the main characters 2 pairs of pants.
The shoulders are a tad droopy, because there's only fusible interfacing and no shoulder pads, but that's ok.
I didn't take any photos of the first suit, for it was sent off as soon as I finished it, but I got some photos of the 3 duplicates.

I made some dumb mistakes on a few occasions, but it was a learning experience, and good practice.
A couple more photos of the actors, taken from here.
After I was done the suits I also had to make a pillowcase, a night cap, hem a sheet, and make a tiny hat and jacket for a puppet version of Grum.
I don't have any photos of the puppet, but it was really good. My teacher made the puppet, and did the curtains & wallpaper for the set, and made the ridiculous latex noses, and a lot of other stuff. 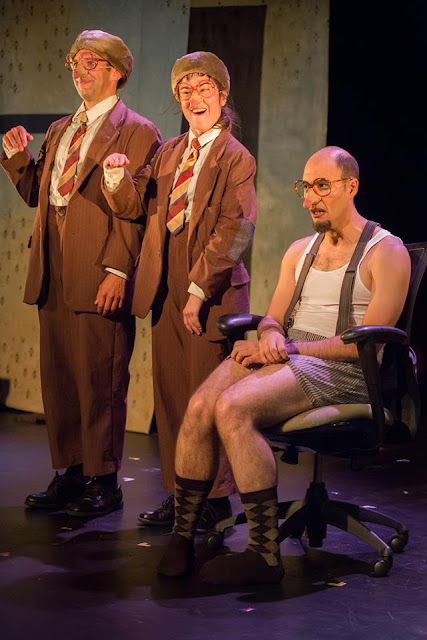 And here is a shitty dinosaur gif I made of me frantically sewing these suits.

I am very glad to have finished these darn things, and will post some good old historical sewing very soon, I promise!
Posted by Vincent Briggs at 15:30 1 comment:

Email ThisBlogThis!Share to TwitterShare to FacebookShare to Pinterest
Labels: commissions

Stays with nobody to wear them


Hello! It has been far too long since I've posted, but I have been very busy up until last week. More on that in my next post.
Another Unfinished Thing has been removed from the pile! 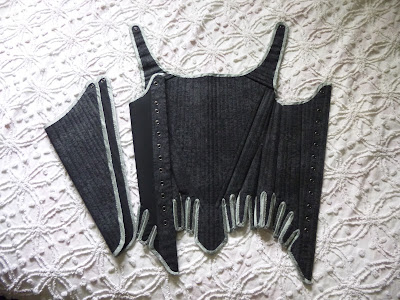 I started these vaguely mid- 18th century stays more than 2 years ago. They were supposed to be my final project for the corseting class in second year fashion, but I didn't finish them in time.
I based my pattern on this pair from The Met, but it didn't turn out quite the same. I definitely made a few foolish mistakes, including somehow putting the straps on the wrong sides, so they point more inwards instead of outwards. 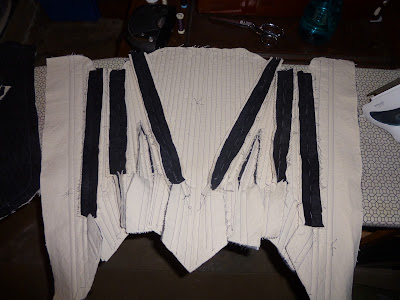 It's made of two layers of cotton canvas with steel boning in between. The outside fabric is a mottled grey quilting cotton. As this was a school project, I wasn't too concerned with historical accuracy.
I stuck a plain black cotton lining in and bound the edges in silvery grey silk bias strips. 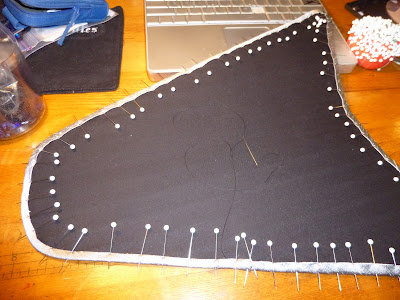 It was a pain to do all those tabs, but with pliers to help I eventually got it done. 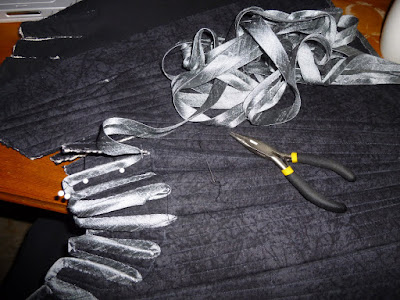 Somewhere in the construction I slightly screwed up the alignment of the pieces, and sadly didn't notice until all the binding was done. The bases of the tabs do not form a nice smooth semi-circle, alas!
I used the grommet machine at school to do the eyelets, and they were done! I haven't tried them on a real human yet, but I got some photos of them on one of the school dressforms.

Sadly, they stays are a bit too big for her, and the foam is so firm it didn't compress well at all. 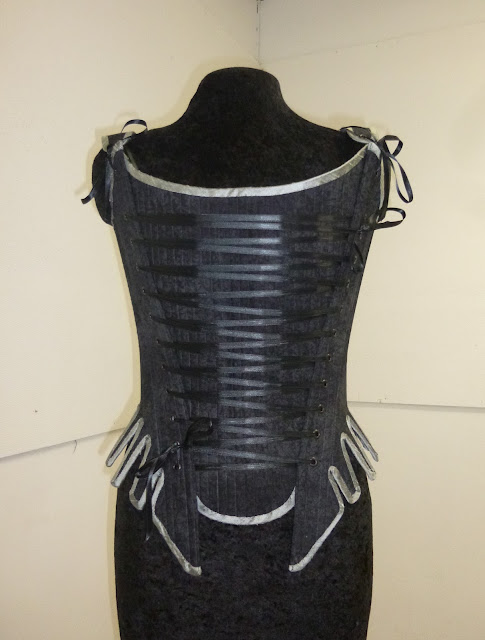 I also need to get some proper lacing for them. They need so much that none of my nicer cord bits were long enough, and I had to use polyester ribbon. 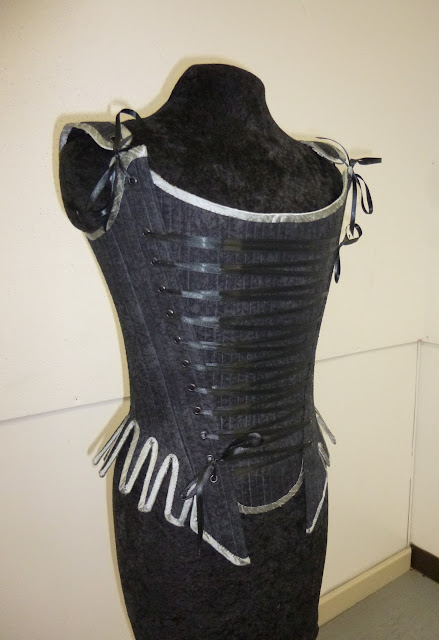 They were originally fitted to me, but I'm not sure they'd fit me well now. And even if they did I'd have no cause to wear them, but hopefully someday I'll get a real human of the right size to model them for some better pictures! 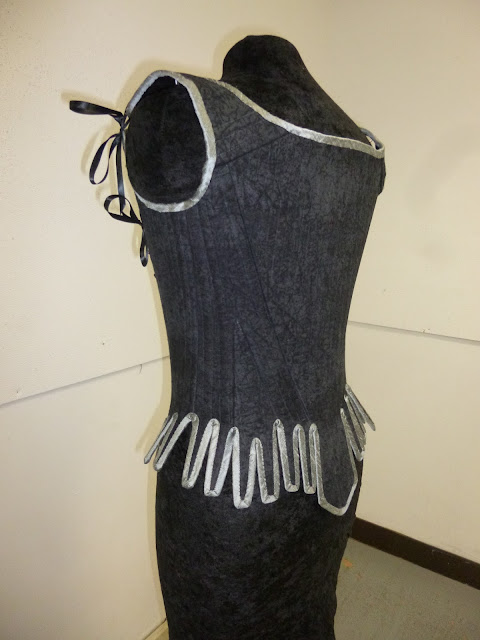 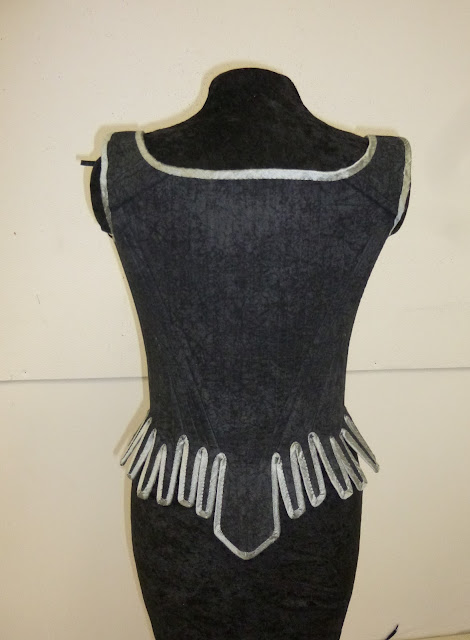 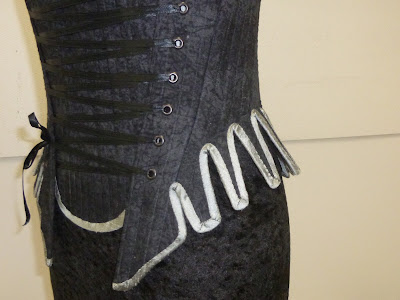 Good riddance to one more Unfinished Thing!
Posted by Vincent Briggs at 12:55 4 comments: