Or, as I've been calling it, The Bullshit Bodice.

It's another commission from Naxius! Thankfully I only had to make one piece of the costume, which still isn't completely done but it was wearable for the con.
It's from the Loki: Agent of Asgard comics, which I have not read but I am certain they were illustrated by someone who knows nothing at all about how clothes work. Either that or they just didn't care about anyone who'd be attempting to sew this thing.

I call it the Bullshit Bodice because the design makes NO sense! There's no way to make that neckline smooth all the way around. It has to fasten somewhere! And the scaly panel in the front looks like it's overlapping the other pieces, but on the bottom edge the side bits are clearly overlapping it. That kind of Escher stuff just doesn't work in real life.

Consequently the construction was mostly made up as I went along.
I forgot to take a picture of the pattern I drafted, but it has a lot of weirdly shaped and annoying pieces.
The solid green bits are a cotton knit, which isn't ideal but it was the best shade of green we could find. (This is the second time he's done this! Whyyyyy.) I fused 2 layers of interfacing to them to keep them from stretching.

The front edge has a series of little cutout thingies, which I made by sewing a small piece of plain green woven cotton to the corner, cutting it and turning it in, then stitching another bit of the interfaced knit behind it. 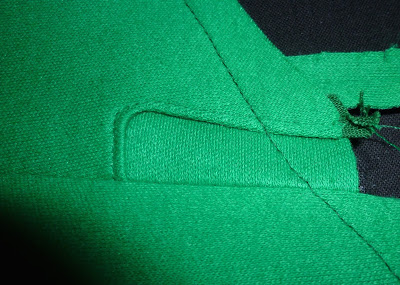 The scales were a nightmare. Thankfully I didn't have too much to do with them. Nax spent forever cutting them out of craft foam, painting them, and hand stitching them to the front and back panels, which I had cut out of heavy cotton twill. 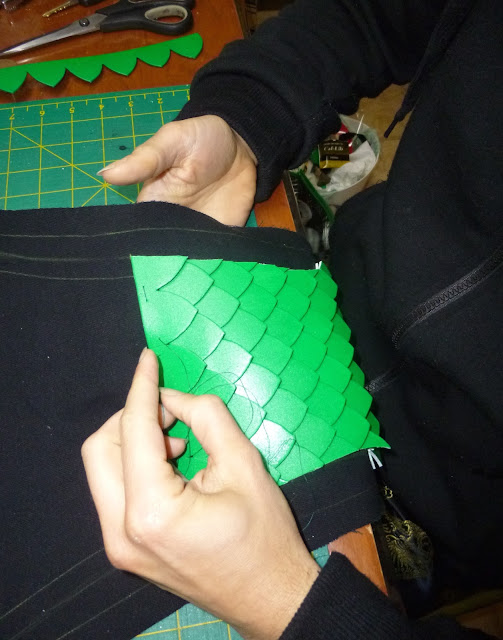 He stuck the rows on with tiny bits of double sided tape so they'd stay in place, then made big hand stitches in between the scales to hold them down. 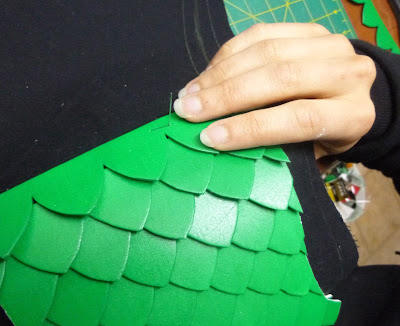 All the gold bits on the bodice are made of a silk that was labeled as dupioni, but it has so few lumps I think it's closer to taffeta.
We agreed double lines of machine quilting would be a good choice for the lines on the shoulder piece, but the stuff wrinkled in places, so I ended up having to cut away sections of the cotton backing. 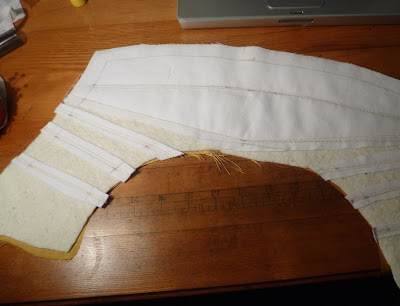 It turned out looking okay though! 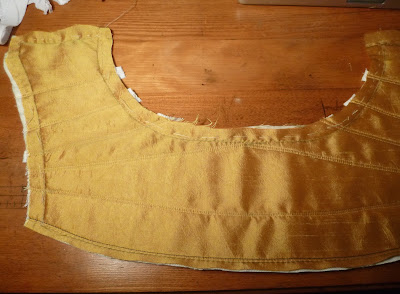 I trimmed the edge very close and stitched it down right next to the scales on the top back with a zipper foot. Then I covered up the seam with a bias strip of the silk.
The side panels are attached in the same way. 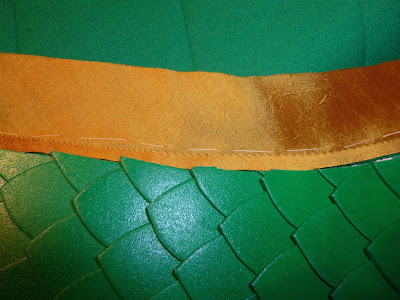 One side of those binding pieces was machine done with the ziper foot, and the scale side was hand sewn. 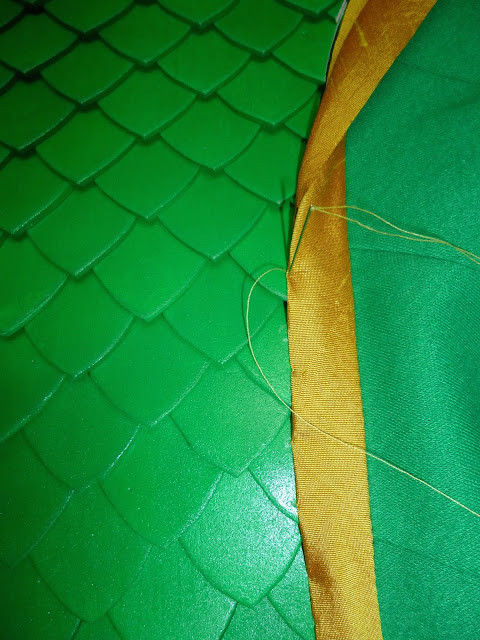 Hand stitching things to craft foam scales is not fun, and the binding looks a little rumply because of the texture of the scales.

Once the main seams were done I lined it in rayon bemberg and bound the bottom edge in a strip of the green knit.

The front edges were THE WORST!
The only way I could interpret the front meant that part of the shoulder strap thing had to be extremely narrow, and also sit nicely over the edge of the scale panel underneath it. It's fastened somewhat like an 18th century gown front with a scaly stomacher, but with extra ridiculous edges.

I connected the shoulder strap bit and the corner of the side/front piece with a tiny rectangle of buckram. I then cut a curved strip of buckram to the shape of the edge of the scale panel, and stitched it to the overlapping edge to stiffen it. 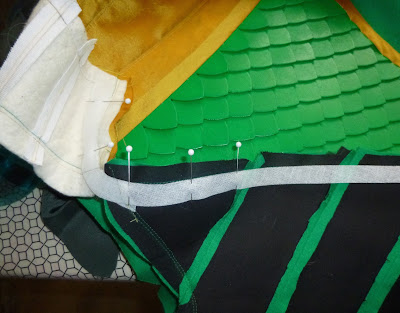 (It was at this point I realized that my little corner cutout thingies were too close to the edge because I didn't take the gold binding into consideration when I measured them, but it was too late to turn back. They're still visible, just shorter than they should be.)

The long strip didn't line up at the bottom, so I trimmed it and cut separate reinforcements for the bottom corners.
After binding the armholes I cut 2 very wide bias strips with a large chunk of fabric at one end, and carefully stitched them to the front edges. I did it partly by machine and partly by hand. When I got to the bottom where I had left the chunk of fabric I trimmed it down so that I could bind the corner without any folds.
The neckhole section of this bit is also bound in a wide piece of the silk.
The front panel needed to be bound all around, and it needed that little shaped thing on the middle of the top edge. I machine sewed 2 layers of buckram together (the buckram I have is fairly thin) in the shape of the top edge, and hand stitched it on. 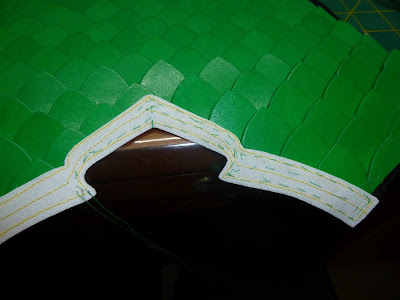 I machine sewed bias strips of heavy cotton to the sides and hand sewed it down. It could have been neater, but at this point it was about 8:30 am after having stayed up all night, and I needed to get it done. 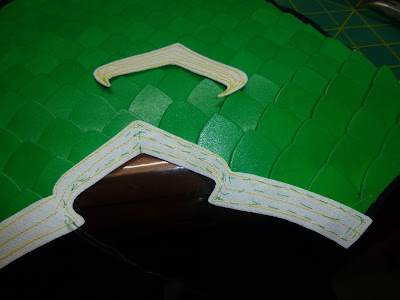 I made another double layered buckram piece for the little decorative front thingy, and wrapped it in silk so that it looked very neat on the front and rather awful from behind. 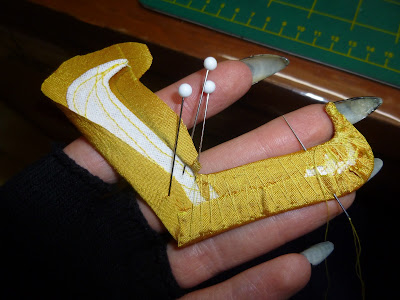 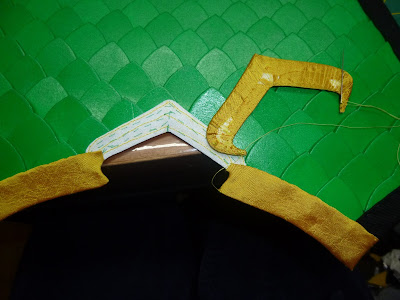 I bound the 2 shorter edges with more large bias strips and attached the little thingy with lots of careful stabbing.
I bound the bottom edge of this piece in the same gold silk.
I attached a bunch of hooks & bars to the ridiculous and horrible front edges.
And we ran out of scales and time, so didn't end up making the scaly leg panels. 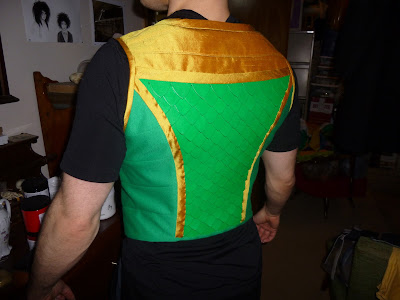 I was disappointed in how the front edge didn't lie flat, but I'm going to add smaller hooks & bars in between the bigger ones and see if that helps.
Nax was happy with it and it was wearable, which was the important thing. 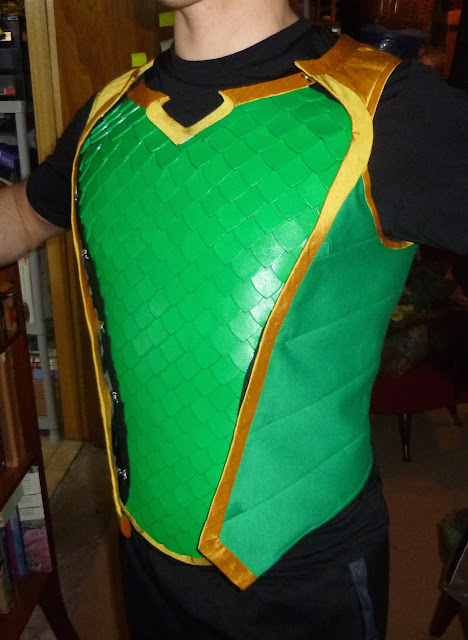 I'm glad the front edges aren't wrinkling at least. And I know I complain a lot in this post, but I do enjoy sewing new and challenging things!
The leg panels here are quick and terrible quilted ones made from the green knit, but we're going to replace them with scale ones eventually.
I had been awake for about 26 hours by the time I finished, which is a bit worse than the robe, but I finished in time. Nax very kindly brought me plenty of coffee, and apologized for the awful sleep deprivation even though it's not his fault I'm terrible with deadlines.

The costume still needs leg bracers, and he has to add buckles to the gloves and make proper belts.
He bought the shirt and pants, and made the crown out of worbla. The gold paint he used matches the silk extremely well!

I haven't seen the outfit all together in person, but here are some pictures from the con that other people took. Apologies to the people I cropped out of some of them!

All in all I'm amazed this mess came together as well as it did! Hopefully the next thing he commissions will be less impossible.
Update: I stitched down the end bits of the hooks, which I should have done in the first place, and moved some of the bars more towards the centre front. It's gaping less now. 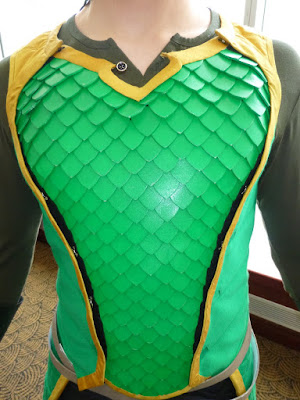 It's looking a bit rumpled after a weekend of wear, but hopefully we can stiffen the bit at the top of the stomacher so it doesn't do that anymore. 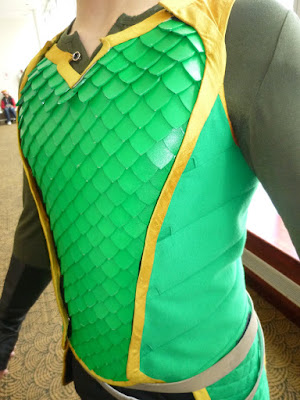 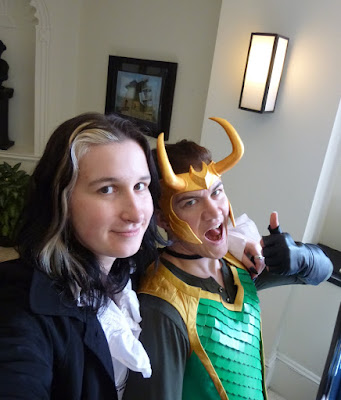