I apologize for my absence.
I have been busy with school things again and am behind on my own sewing projects.
I am not off to a very good start on the HSF '14. The first project was late, I missed the second one, and there is no way I will finish the third one on time. As I am frequently informed that school is the higher priority, I will not be able to complete as many of the challenges as I would like. I am, however, hoping to have a linen shirt finished in time for #4.

Now, since I have no posts on actual sewing, here is another thing from the Old Stuff Collection. I found this capelet in a trunk in my Grandparent's attic. 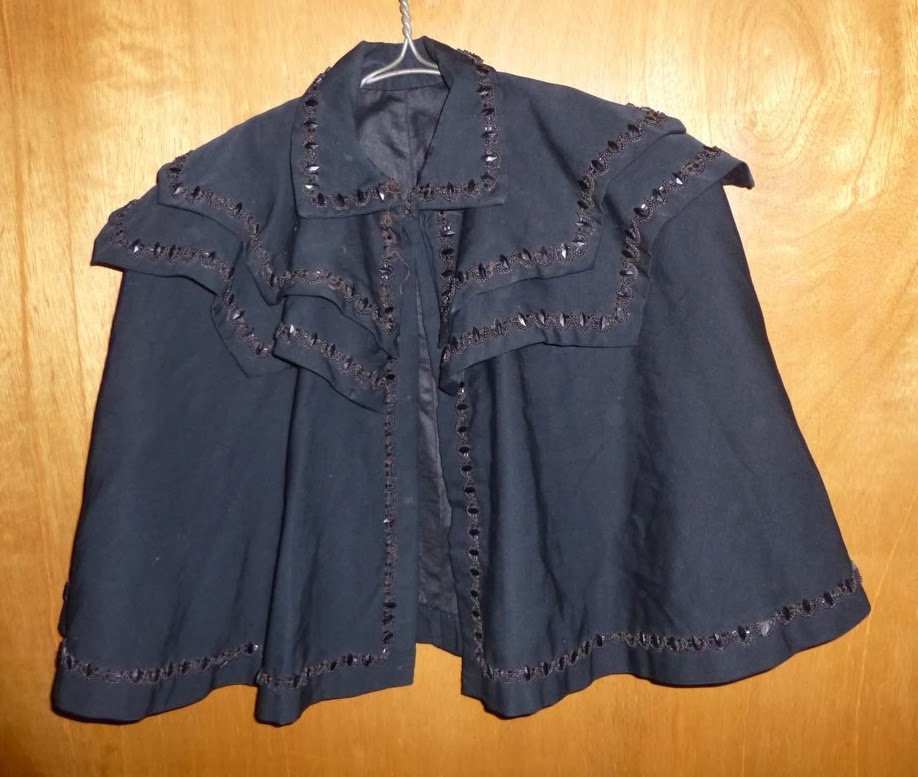 Isn't it marvelous? It would have looked very nice with the reticule that was in the same trunk. 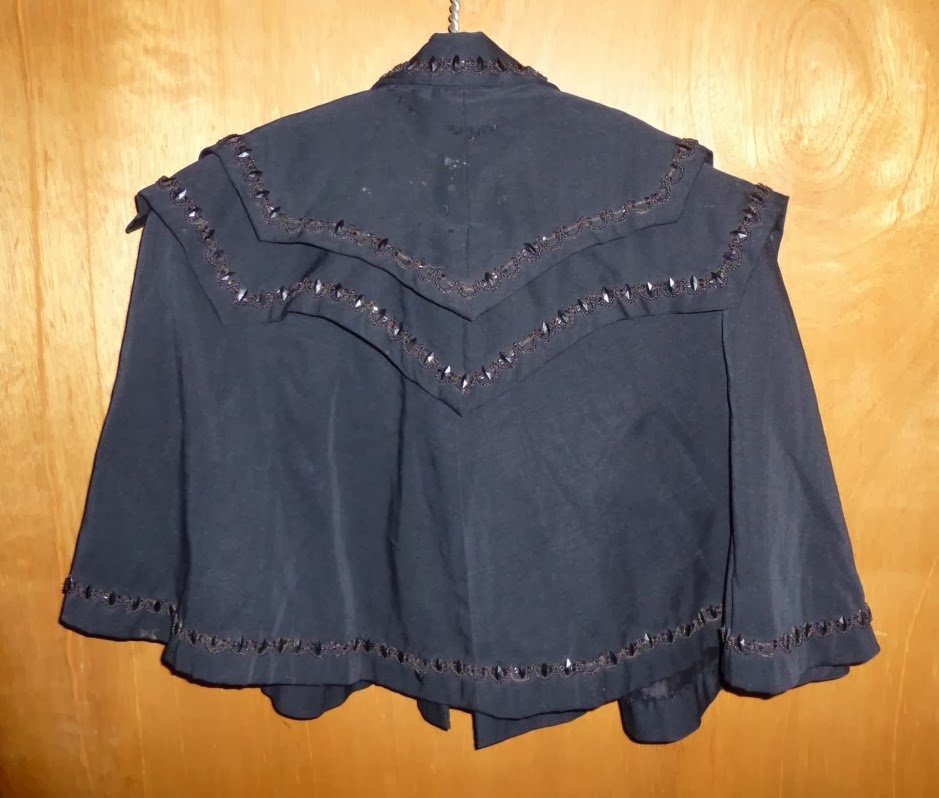 I'm not sure what date it's from, but it looks like either very late 19th century, or very early 20th century. There were tiered capelets around at that time, but I haven't seen any others with inward curves and beads, nor with this kind of spacing. I am not particularly knowledgeable about this era. Can any of you help narrow down the date?


The large piece is about 3/4 of a circle. The two smaller ones are a bit longer. All three tiers are seamed in the centre back. The major seams are all machine sewn. 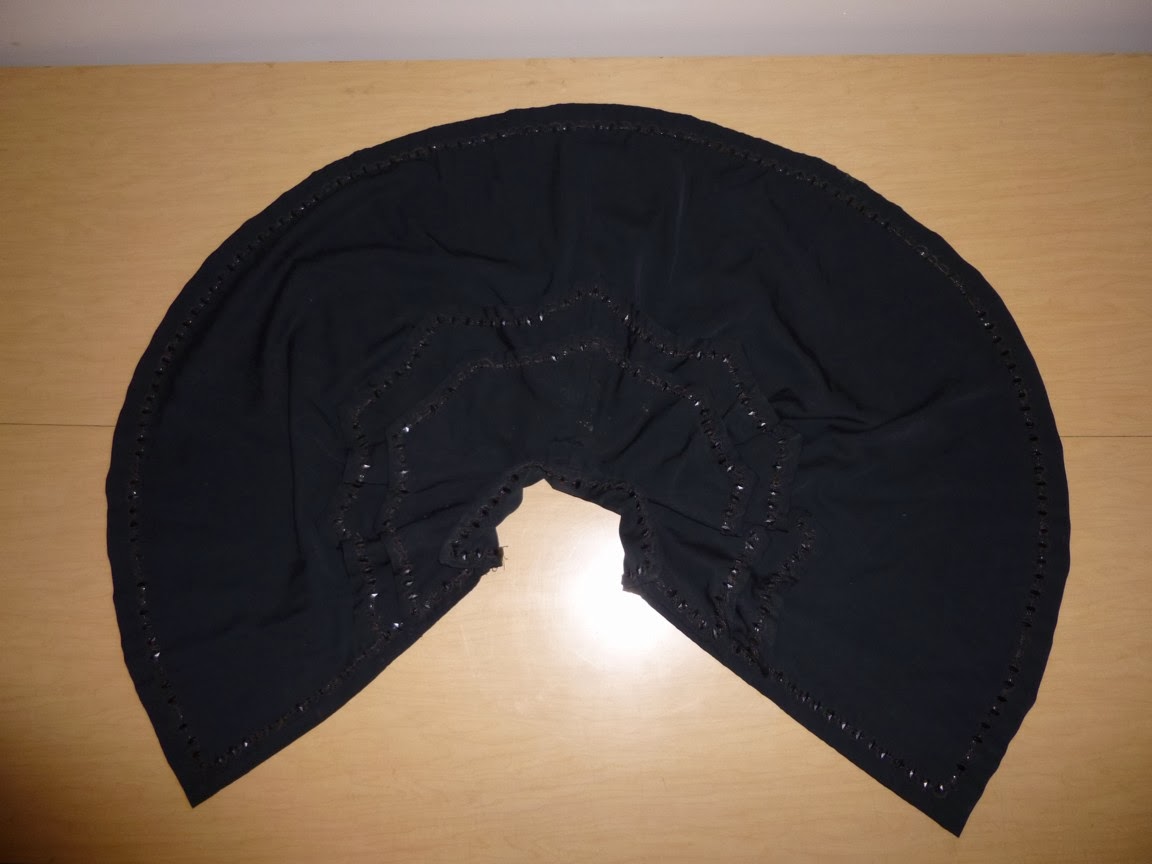 There is one hook & eye closure at the base of the collar.
I'm not exactly sure what the fabric is, but judging from the rough texture I think it might be a very fine wool. 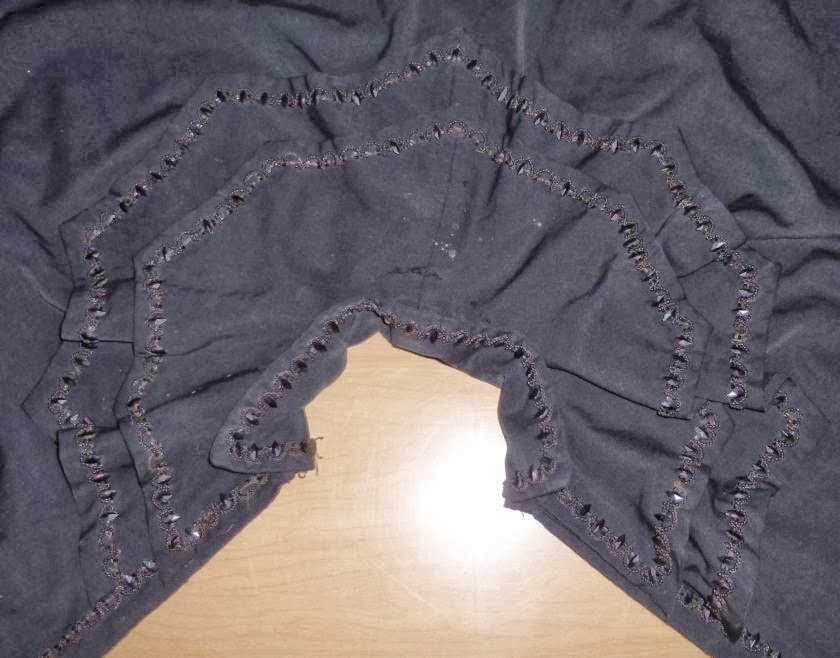 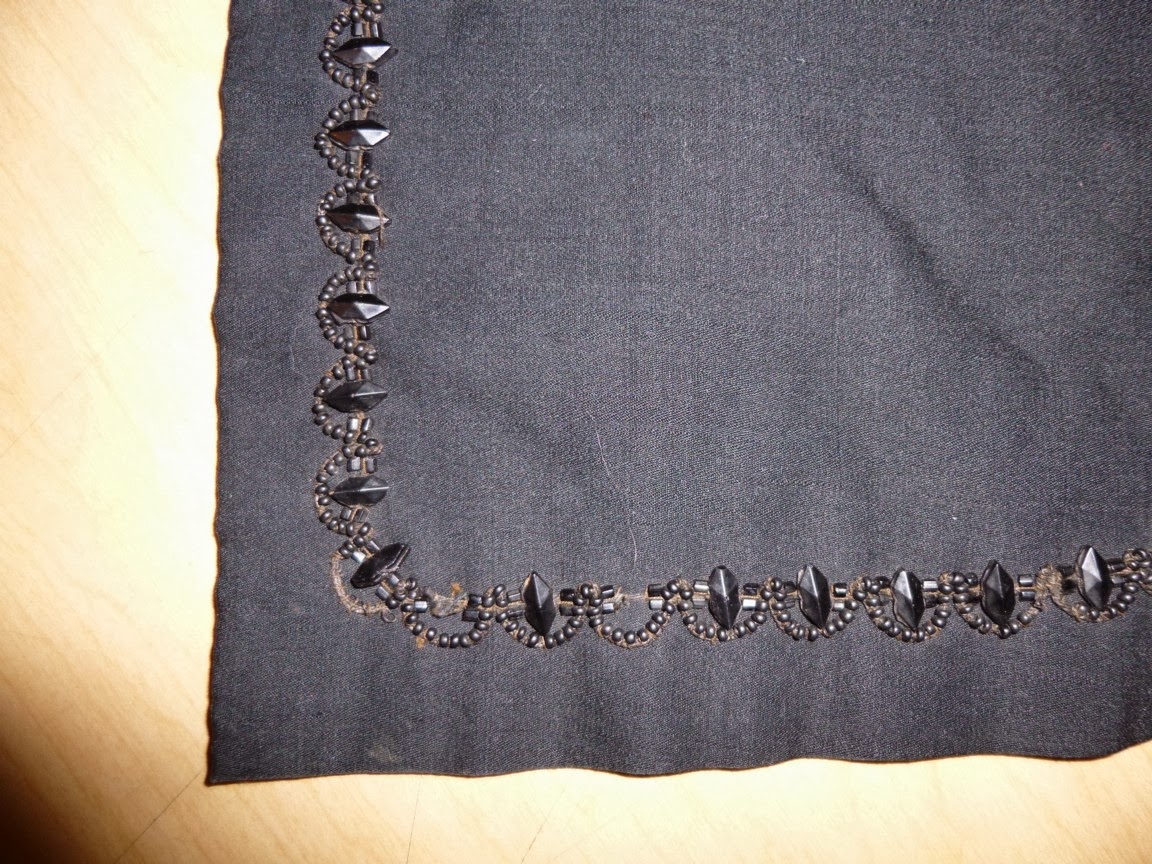 The beads are a pre-made trim that has been couched on. It has 3 different kinds of glass (or maybe jet?) beads. Many of the large ones have fallen off. 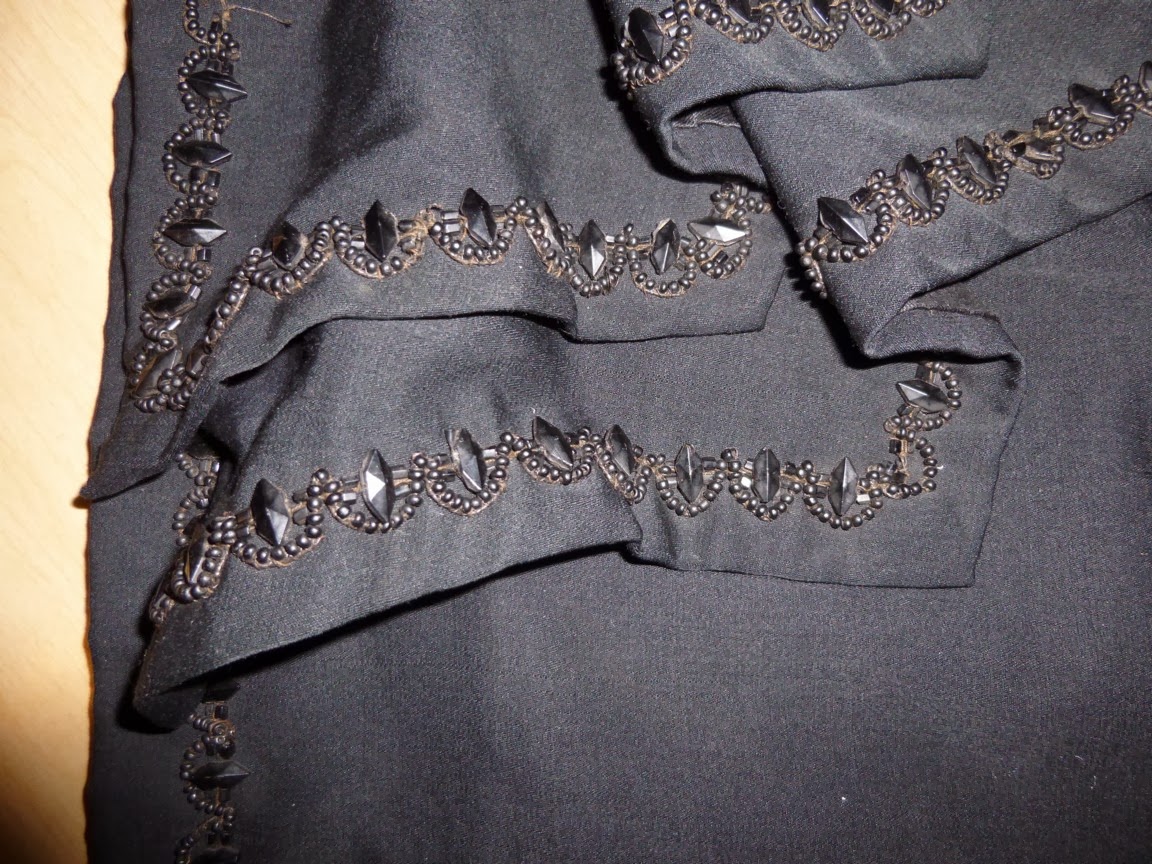 The stitching holding the trim on is uneven and shows on the wrong side in a few places, especially under the collar. It's attached with brown thread.
The third point on the top tier is tacked to the middle tier, but only on the right side. The left side was probably tacked at one point. 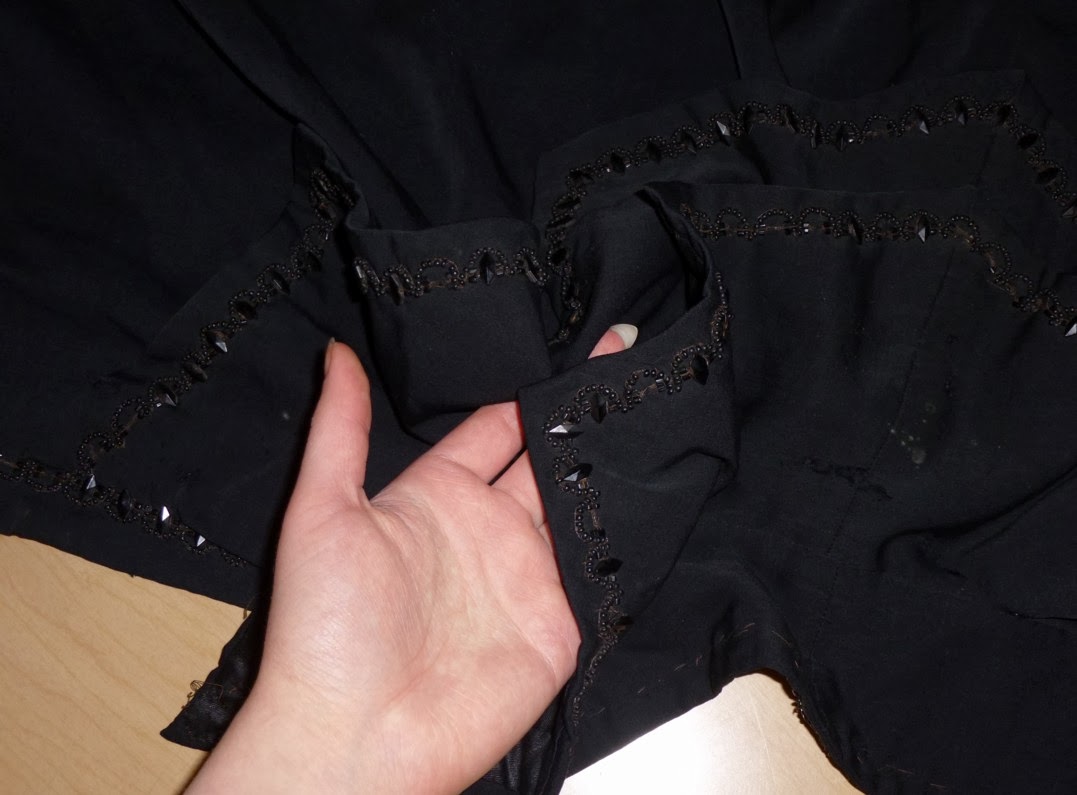 The middle tier is tacked to the front edge of the bottom tier, just past the trim.
There is quite a bit of wear on the back, under the collar. Other than that, and the missing beads, it's in pretty good condition. 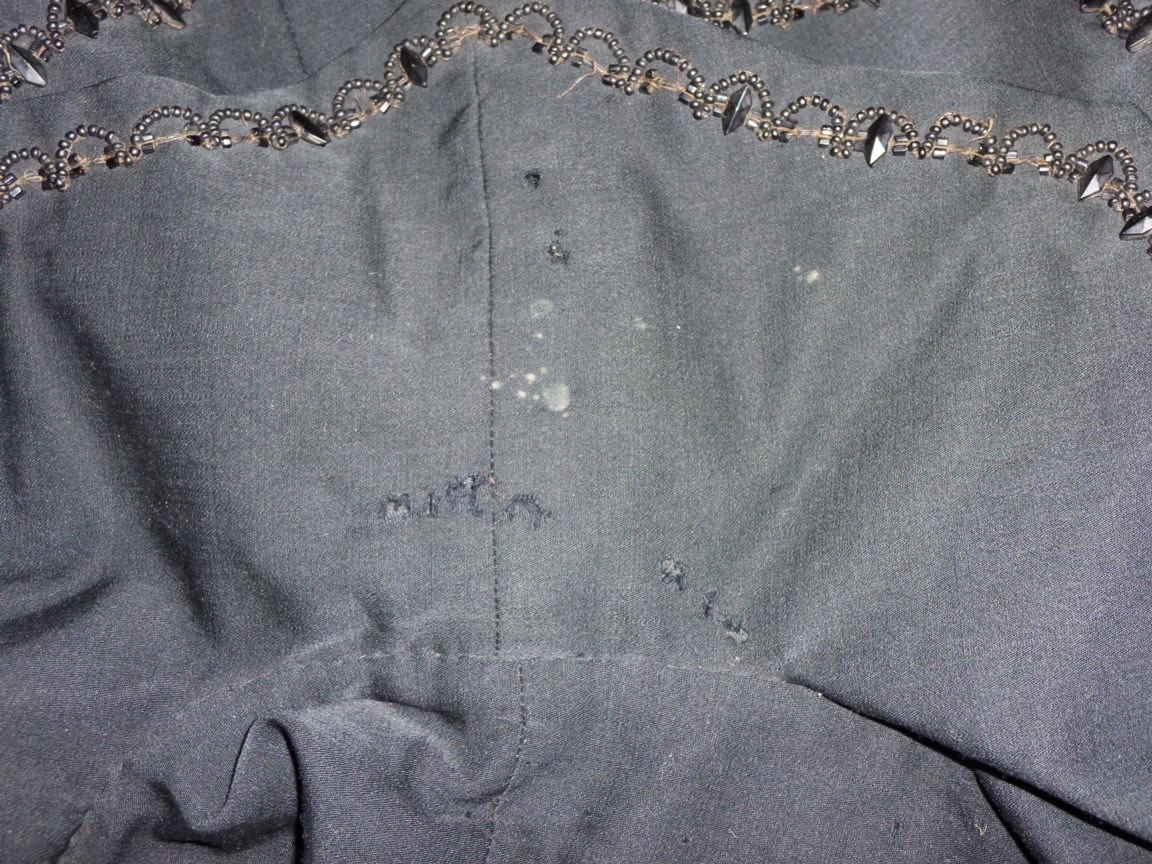 The lining is a very shiny cotton twill. The hems of the top two tiers are very nicely finished with wide bias strips of the same materials. 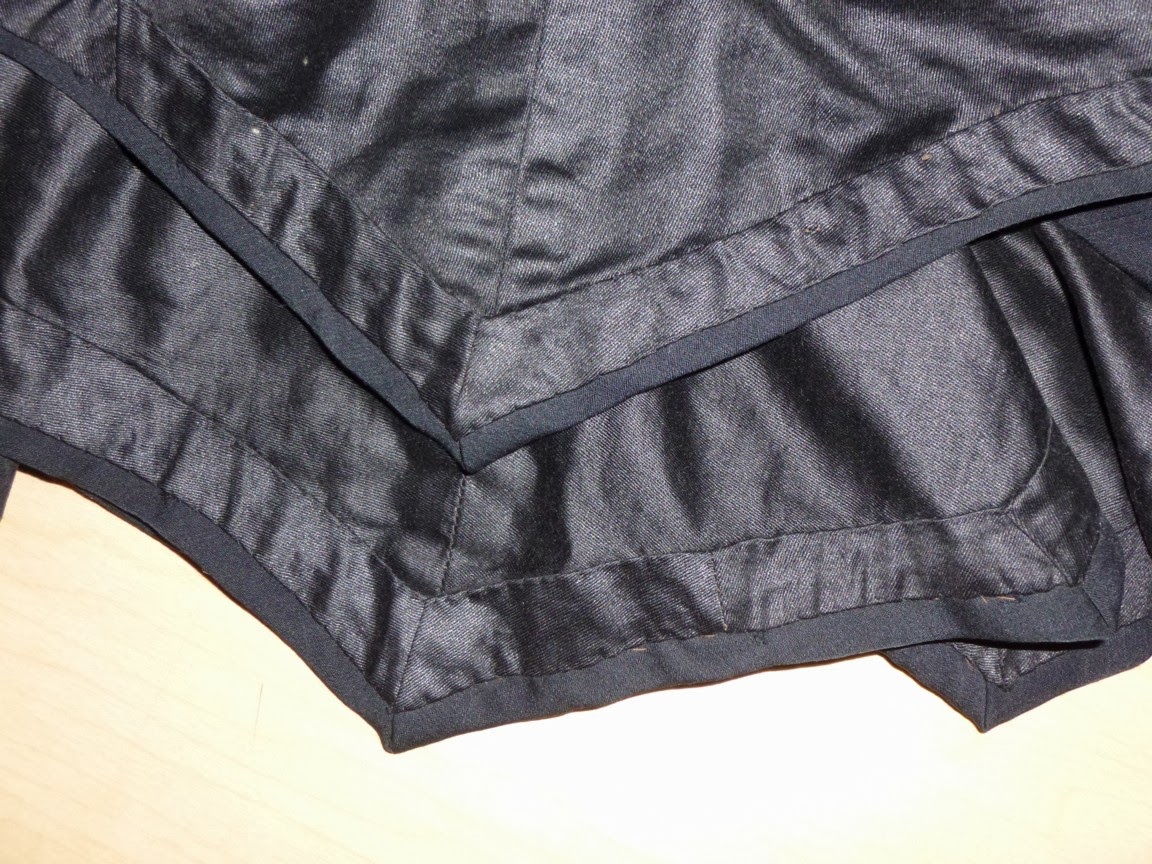 The hem of the bottom tier is simply turned up once and finished with a cross stitch. 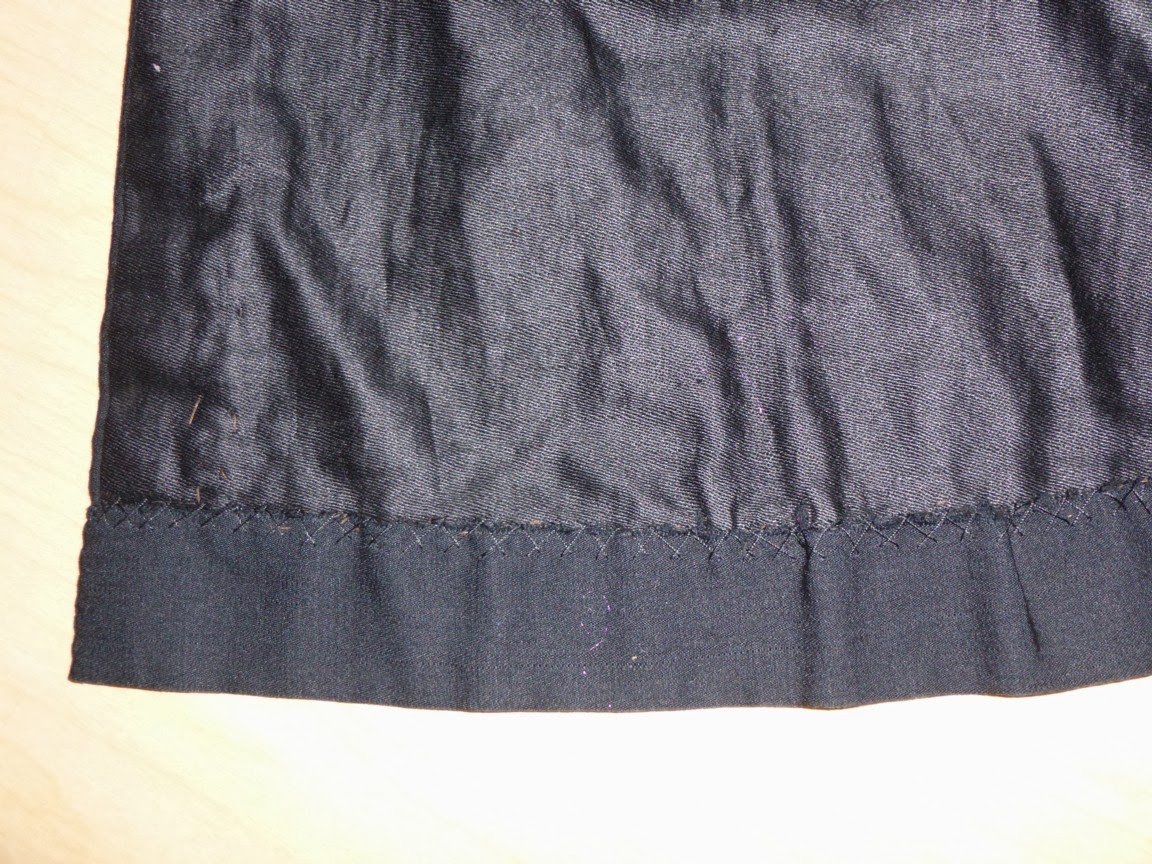 The collar is almost perfectly rectangular, and doesn't feel like it has much stiffening in it at all.
There are two darts at the shoulders. They are sewn through both the lining and the outer fabric, slashed open, and whip-stitched to the inside. 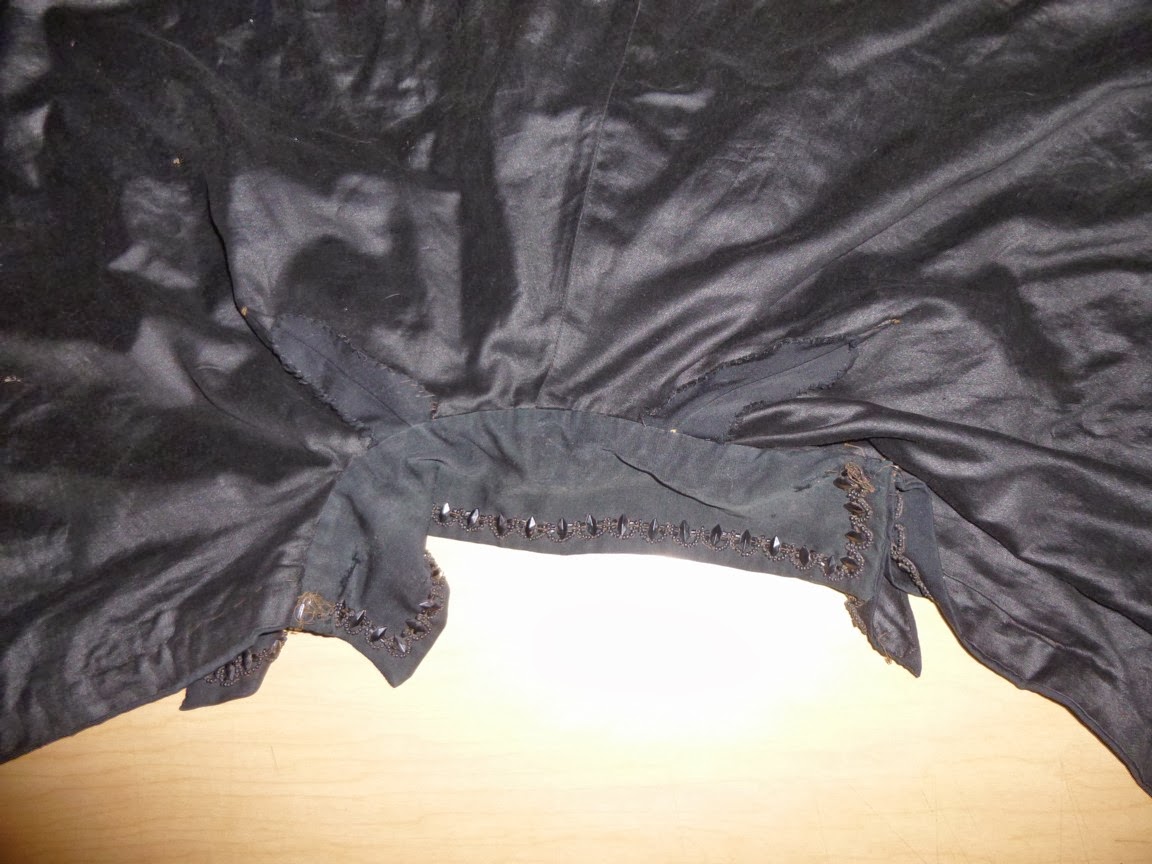 It looks as though whoever made this capelet ran out of black thread before they were finished.
I don't know what sewing project I will be finishing next. I just drafted a frock coat pattern and I'm super exited about it, so I would really like to make a frock coat. Perhaps the grey one with the zig zags.
Posted by Vincent Briggs at 18:04 3 comments:

I've been meaning to post about this book for months.
I found it when we were packing up Grandma and Grandpa's books. (For the record, they're not actually dead (Update, 2018: now they are), they just moved into an assisted living place.) I snatched the book up when I saw it, because it was clearly very old. 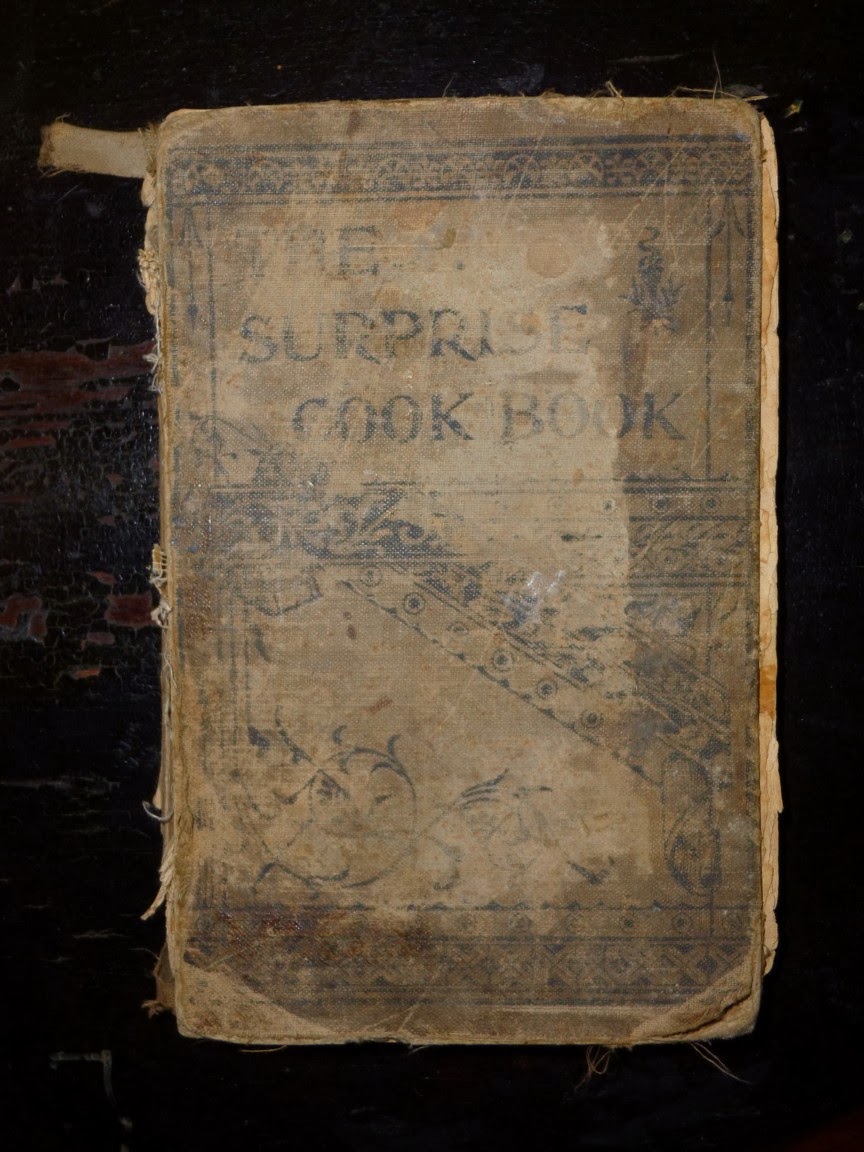 It's in pretty bad shape. The spine has fallen off and the pages are barely clinging together. 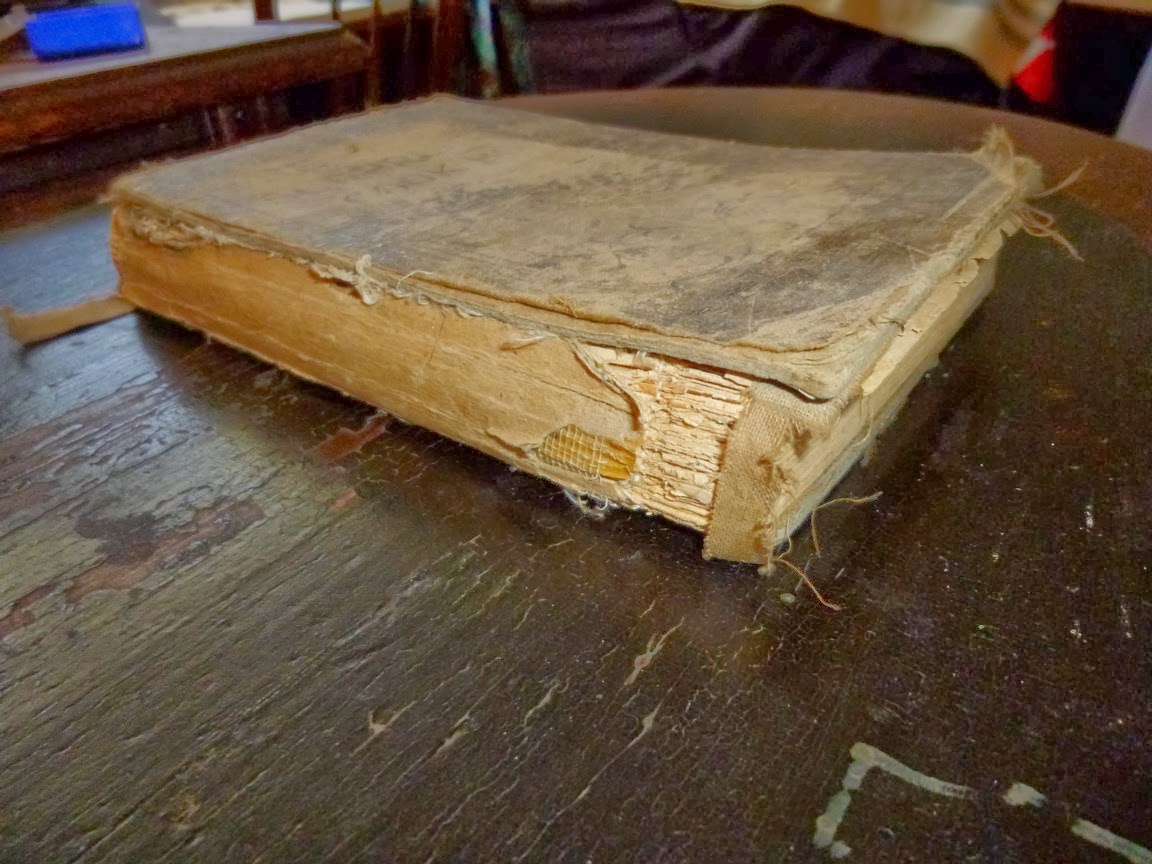 There are 3 dates written on the inside cover in pencil. The first one is 1929, which can't possibly be the publication date. Under that there is "1868", and under that "61". Judging from the contents, I am willing to believe that this book is indeed from the 1860's. 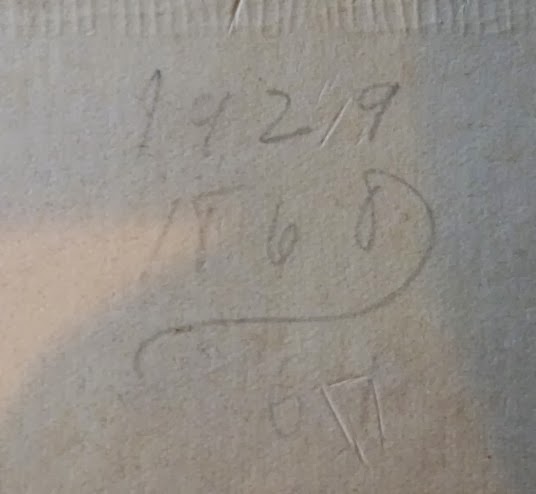 There isn't any publication date. They don't even give the author's name or the country in which it was published(though it's quite obviously from England).
There is, however, a very snobbish dedication.

"Dedication.
To Those Housekeepers
Whose patience has been often tried, and their materials wasted, in
attempts to follow the impractical directions contained in cookery-books
written with delicate fingers, and based upon French
and other foreign writers,
This Volume,
(Expressley and painstakingly prepared for those who would have good
living without an exorbitant outlay of time and money, and
free from the risks of mere "experimenting")
Is humbly dedicated
by
The Author"

Humbly dedicated indeed. Those "French and other foreign writers" were probably publishing much better recipes than these ones at the time this book was written. Just look at how much of this stuff is boiled. 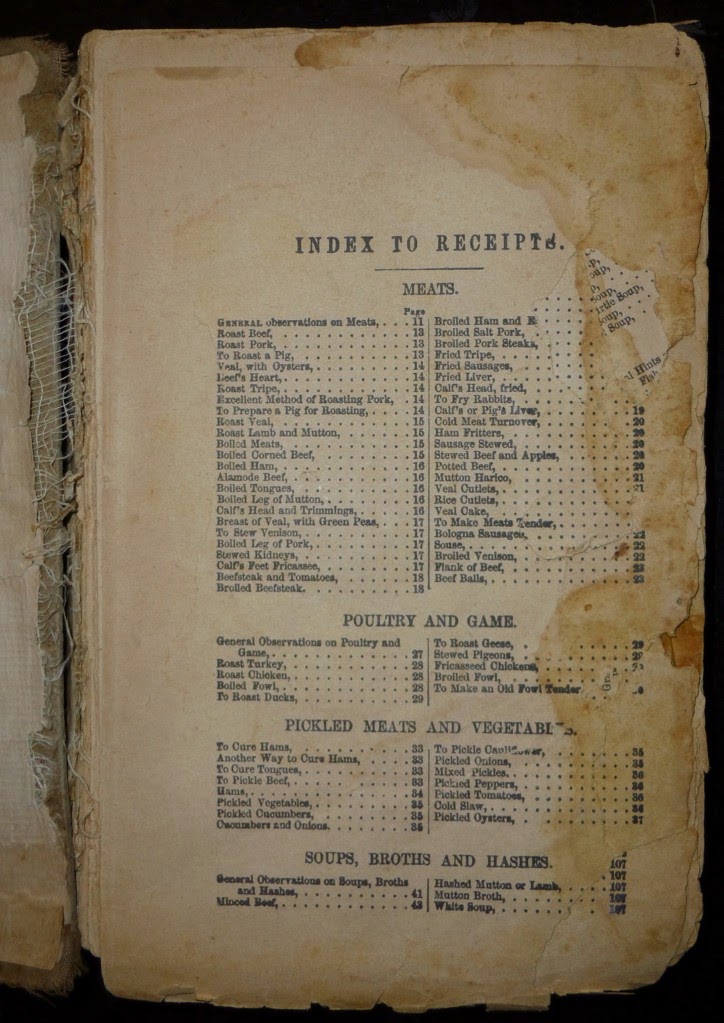 I made the pictures bigger than usual, but you still might need to click some of them for a larger image. 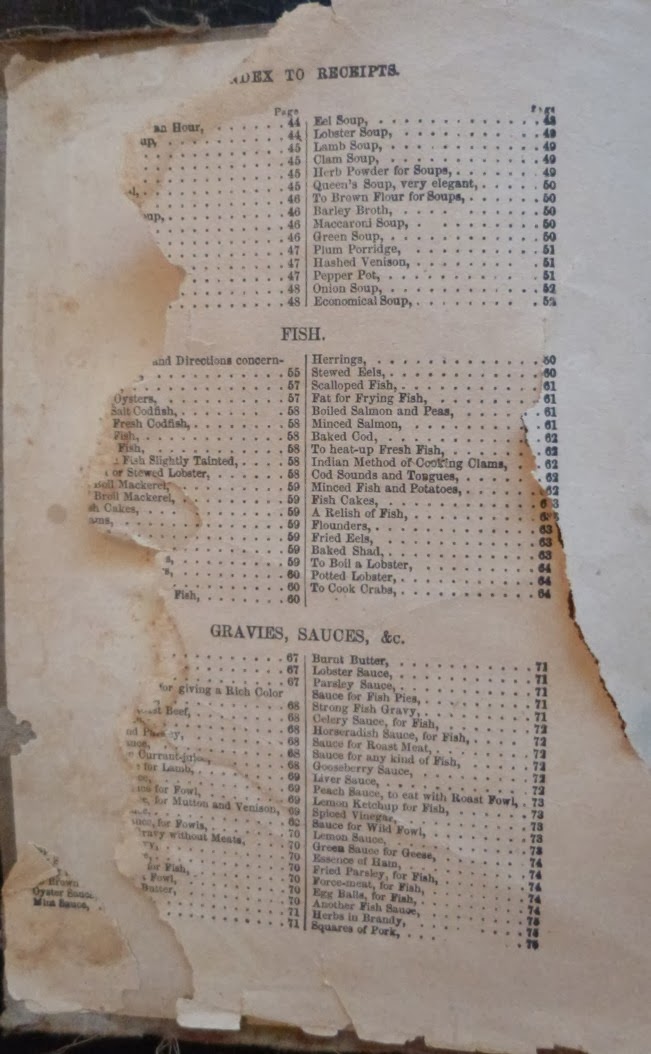 Apologies for the mangled and stuck together edges. 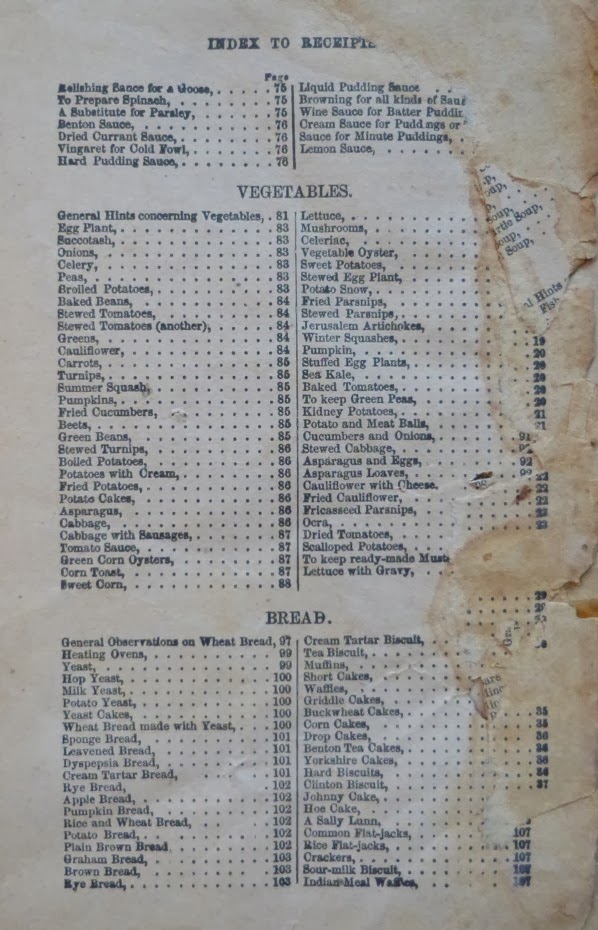 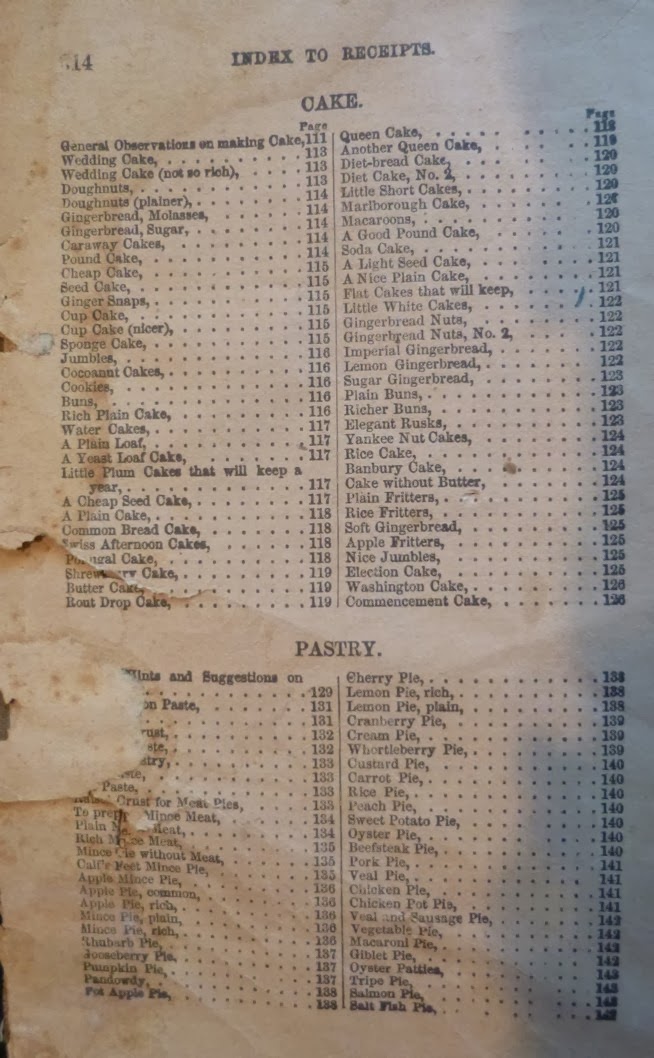 The end of the index has a couple of lovely pictures. Unfortunately someone has scribbled on one of them with a purple crayon. At least half of the illustrations in this book suffered the same fate.
Rather than scanning these pages, I am photographing them. The images aren't as nice as scans would be, but scanning would require bringing it to school, opening it, and turning it upside down multiple times. The book is in no condition for that kind of handling.
I'm not blogging the entire book. Ideally I would like to make the whole thing available online, but for now I've just skimmed it and photographed the bits that looked most interesting.

The first chapter was Meats. There was too much boiling. Ick. 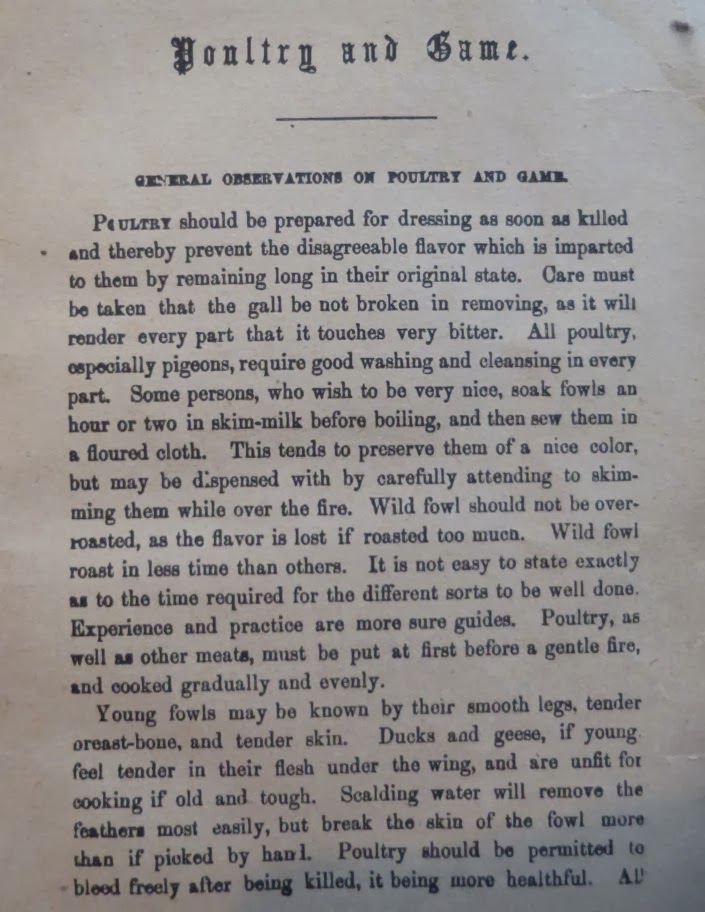 It's interesting to see instructions on dealing with freshly killed fowl.

Ashes? Is that safe? I suspect that some of these recipes are more than a little poisonous. 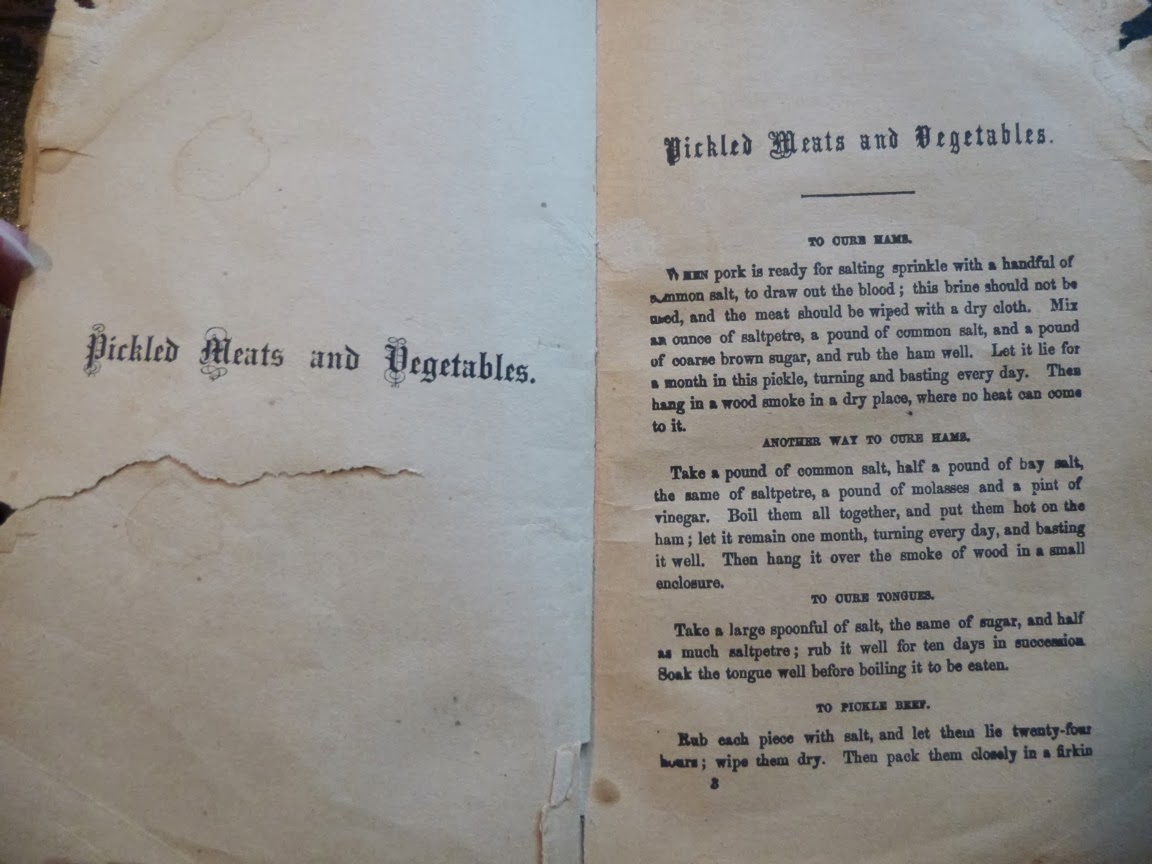 The picking chapter covers just about every kind of meat and vegetable there is. 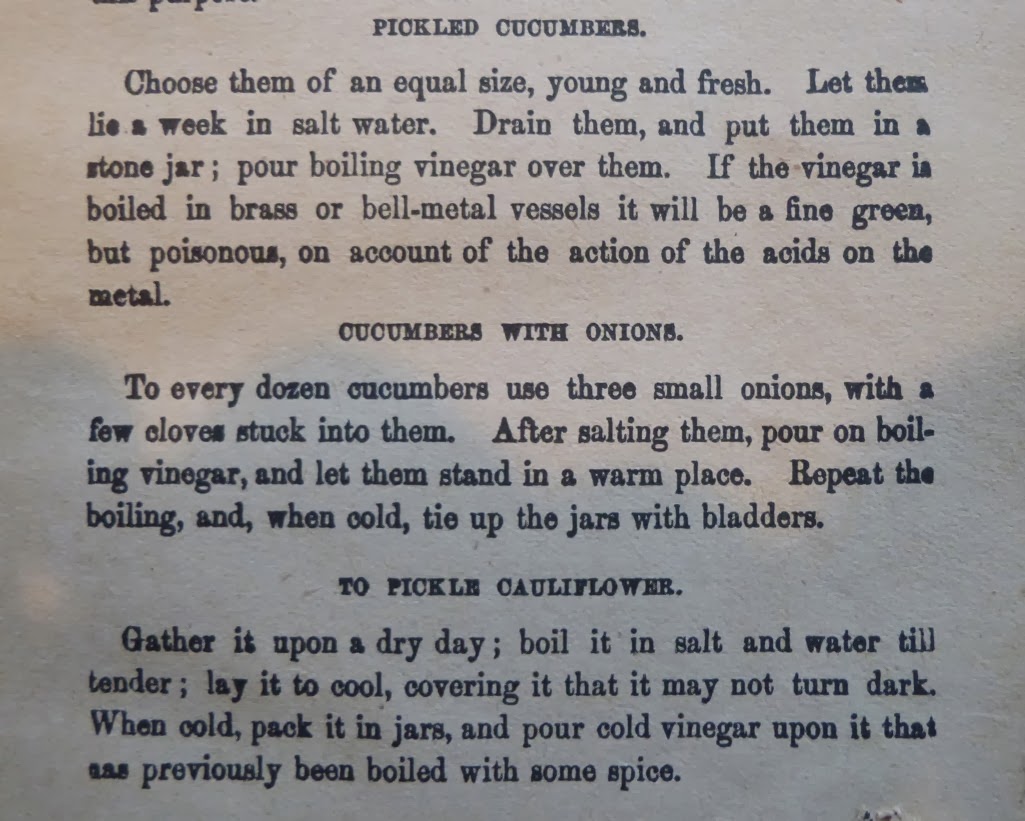 I'm familiar with pickled cucumbers, and pickled onions, but not oysters. Oysters make quite a few appearances in this book. There are also a lot of things that are tied with bladders.

I wonder how well the Mock Turtle Soup imitates turtle. Never having had turtle or calf's head I couldn't begin to guess.
Some of the recipes have highly amusing names. 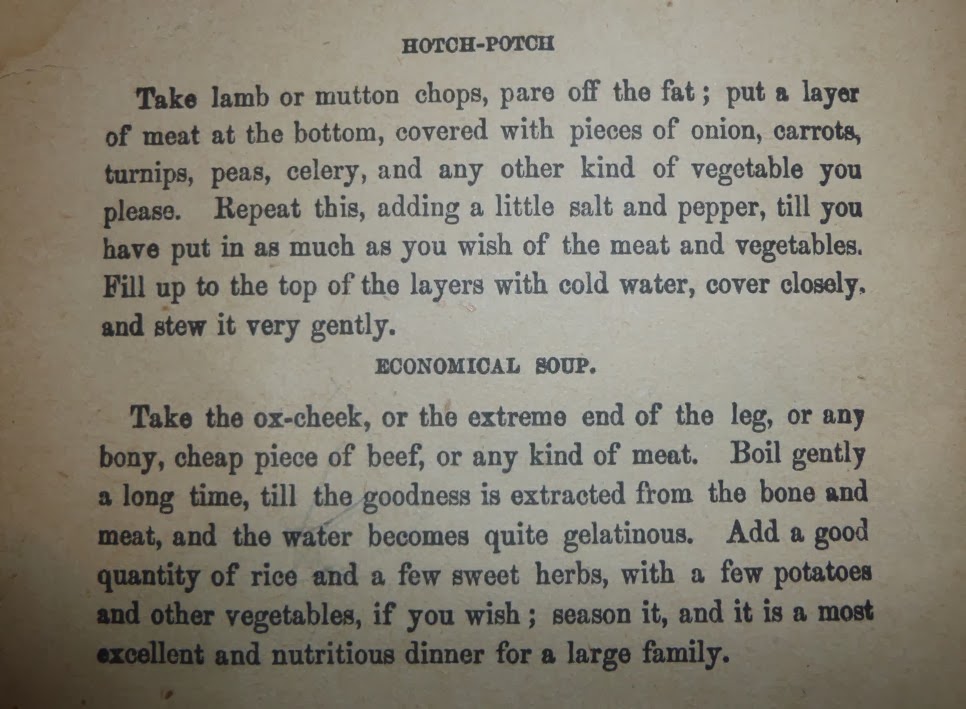 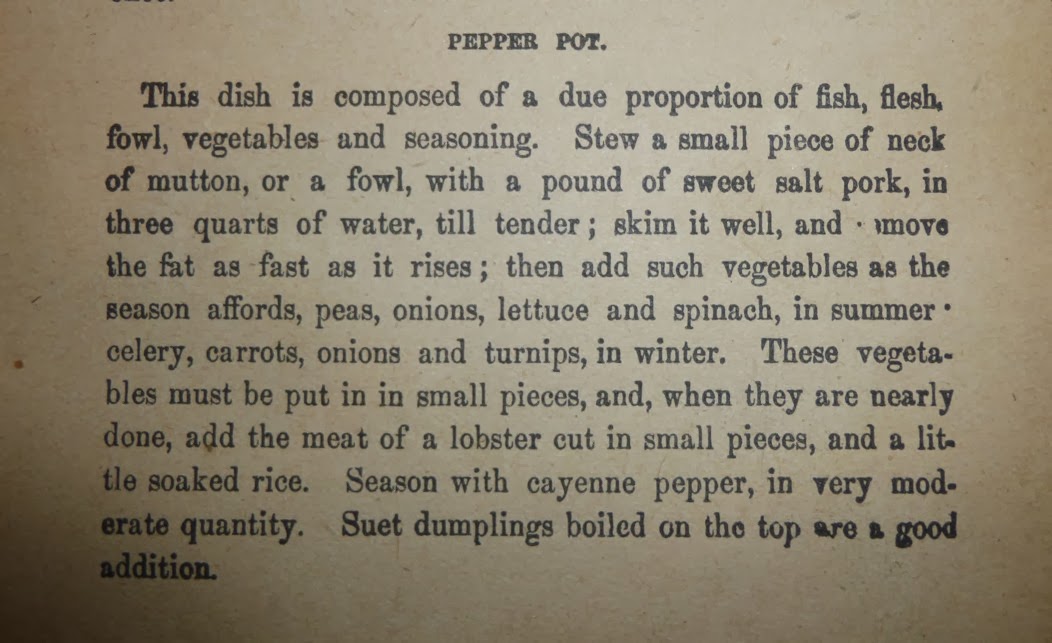 And even more oysters! I seem to recall a lot of oysters in Dickens's books as well.

Tucked in between the pages of the fish section, I found a piece of paper.
On it was a handwritten recipe for soap. 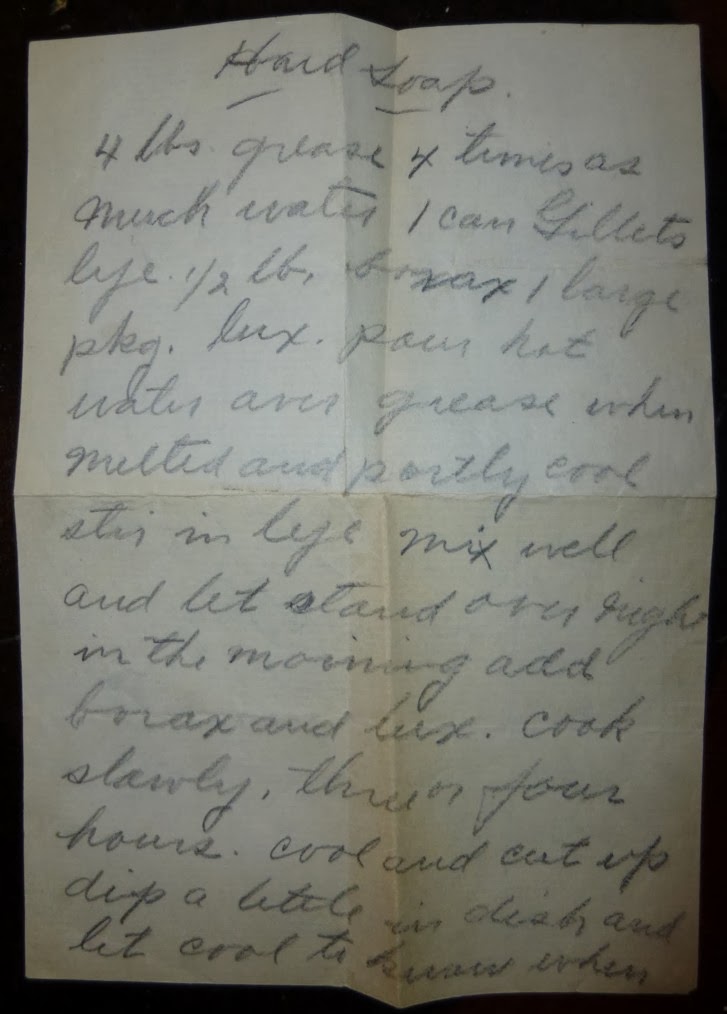 It looks like they started writing it on the other side, but then scratched it out and started over on the other. 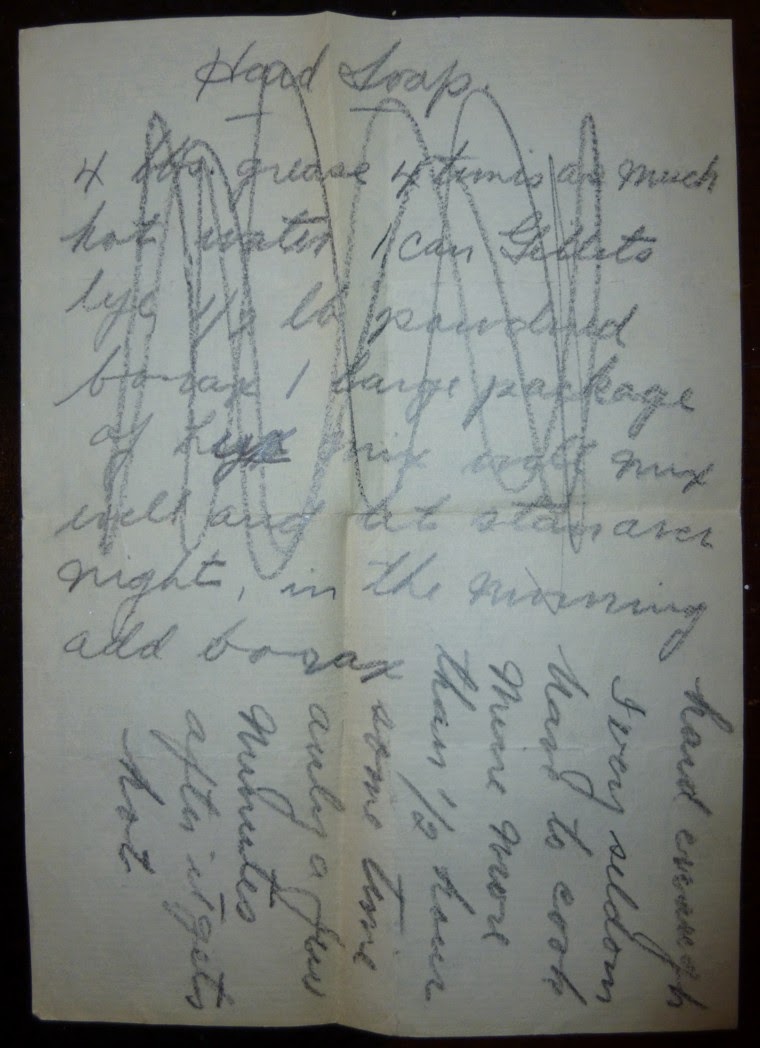 That's the first 25 of the 119 pictures I took of this book. I'll post some more of them later.
If you find something in the table of contents that you would like to see, just ask me and I'll make sure it gets posted.
Posted by Vincent Briggs at 07:19 7 comments: