I finished my shirt!
I am so very happy with how it turned out. 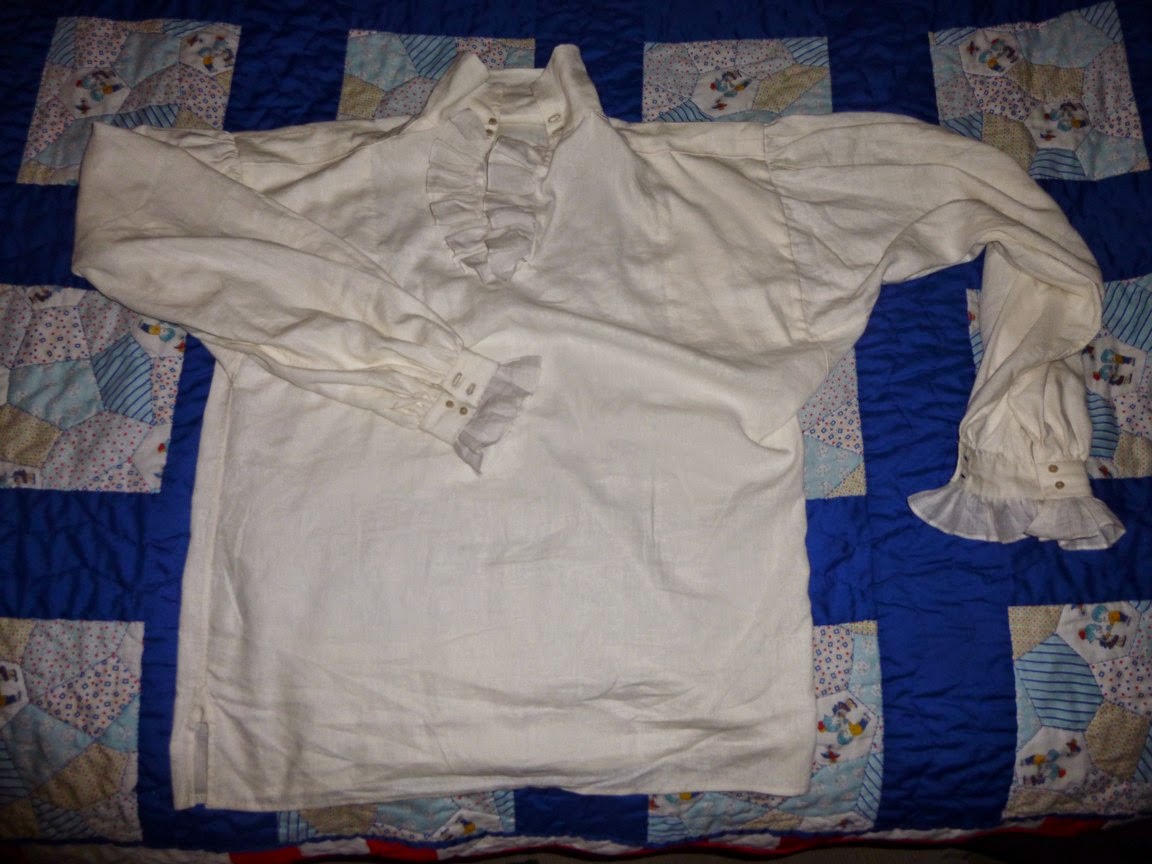 The fabric is 100% linen. I used the measurements given in the Early American Life article, with a few changes based on the cotton shirt I tested the pattern with.

Measurements for the pieces are as follows:


The only fine linen thread I had was brown, so I just used it for the structural bits. I used white silk thread for all of the finishing. I pre- waxed my threads and ironed them in a folded sheet of paper, a trick I read about on Victorian Tailoring. They worked so much better this way! The fabric didn't strip any of the wax off like it usually does and there was barely any knotting. 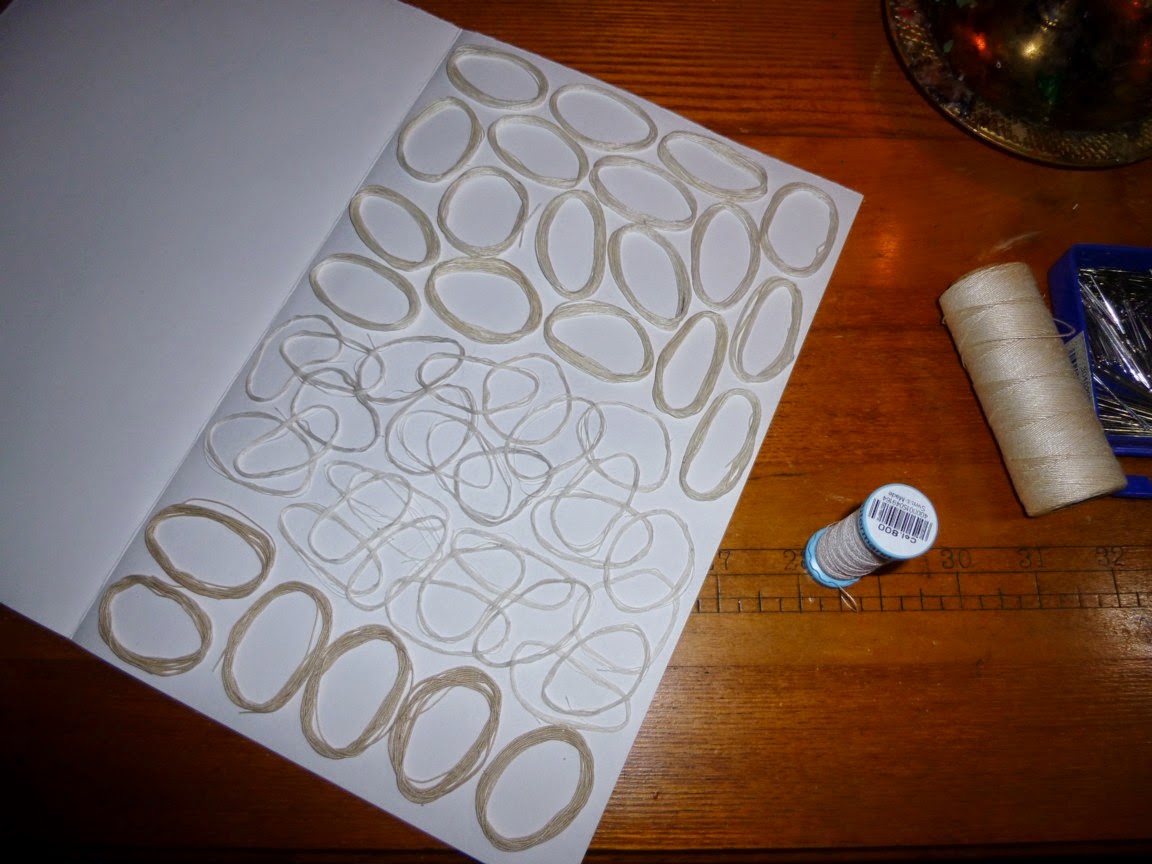 I sewed the shoulder seam, wrong sides together, with a backstitch. The seam was pressed open and the triangular neck gussets sewn on either end of the neck opening, on both the top and the bottom. 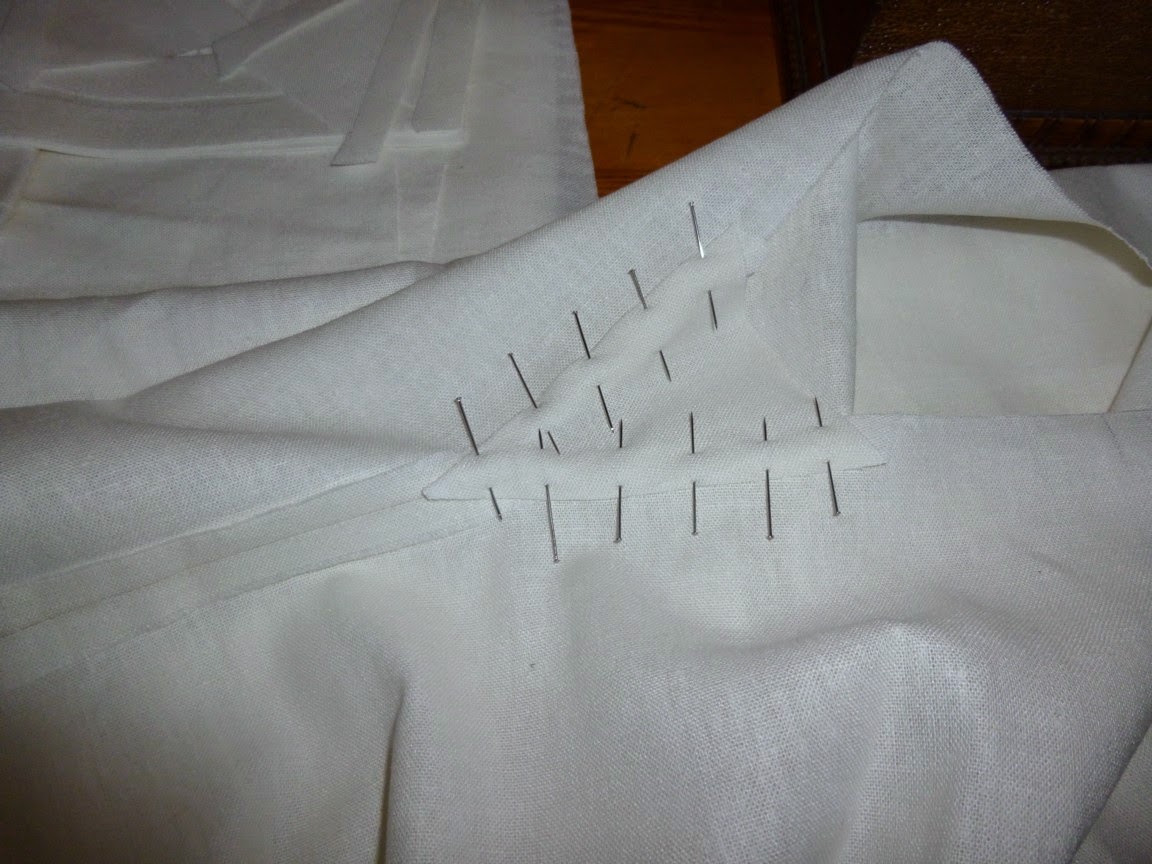 The shoulder strips went over top of them. They were attached with a backstitch, as were the gussets.
For the ruffles I used a fabric from my grandmother's stash. I can't be certain, but I think it's linen. It's quite fine and crisp. It's only 18.5 inches wide, so I cut all the ruffles that length and left the selvedges on the ends. 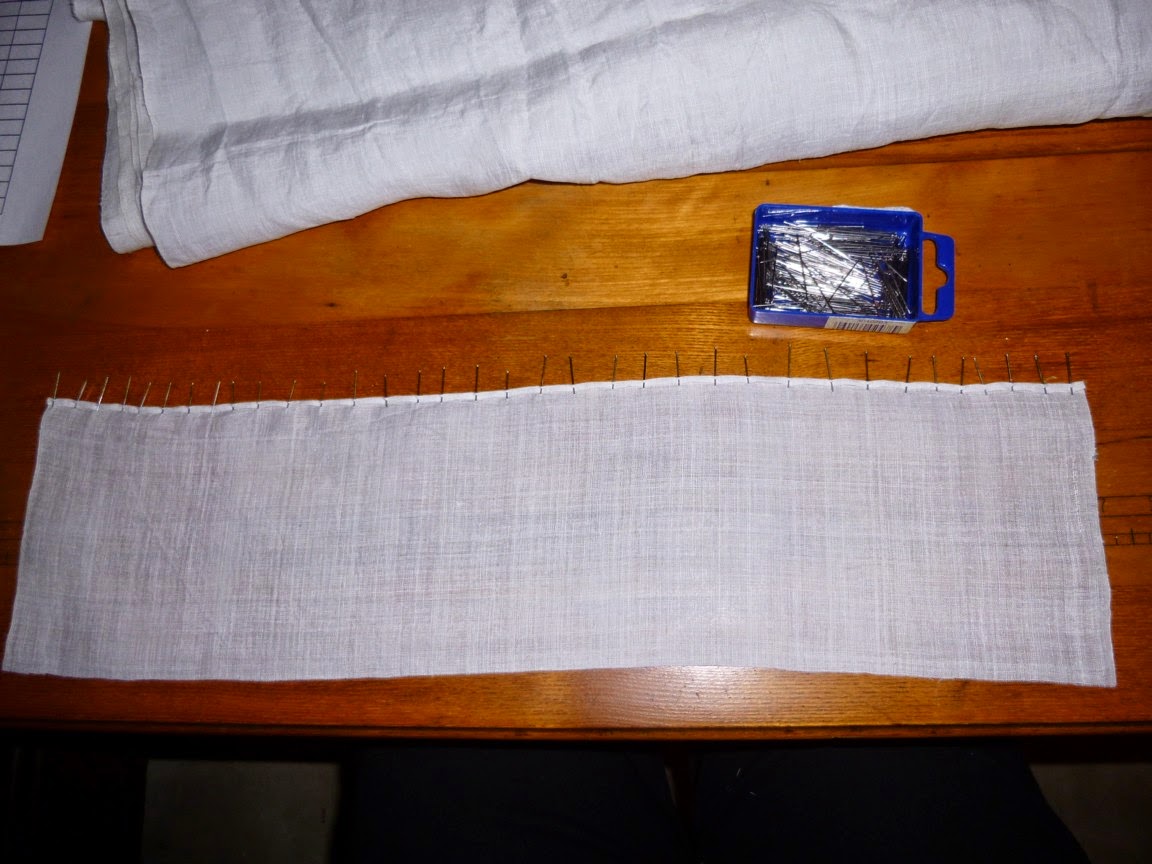 The neck ruffle was cut 5" wide and hemmed on both edges with a running stitch.
I marked a line down the CF of the shirt body and down the middle of the ruffle. I box pleated it to the CF line, and it ended up going about 7" down the front of the shirt. 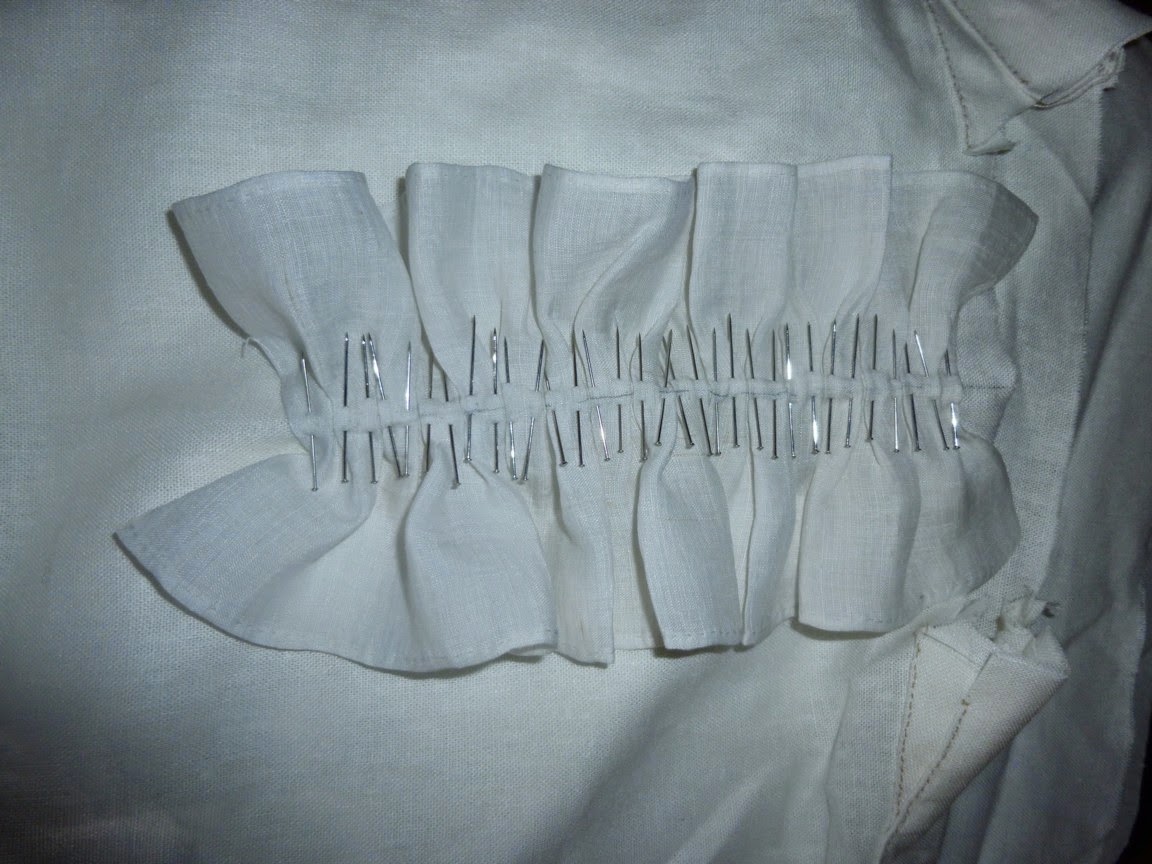 I basted the pleats down, and then basted a thin rectangle of the ruffle material over top of them.
I then sewed around the CF line, through all the layers, from the wrong side.
I cut down the line, turned the facing rectangle to the inside, turned the edges in and stitched them down using a running stitch. 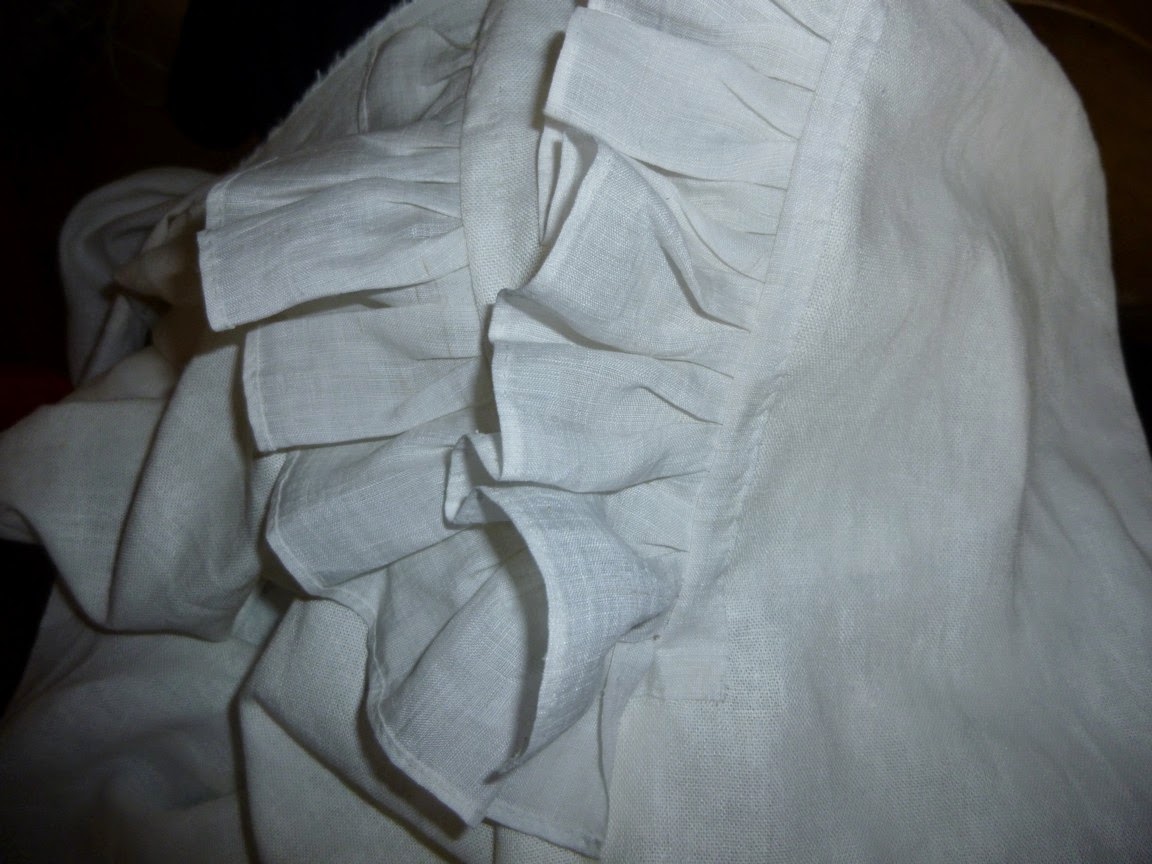 I backstitched the collar edge to the neck hole, gathering all the single-layer parts of the neck opening. 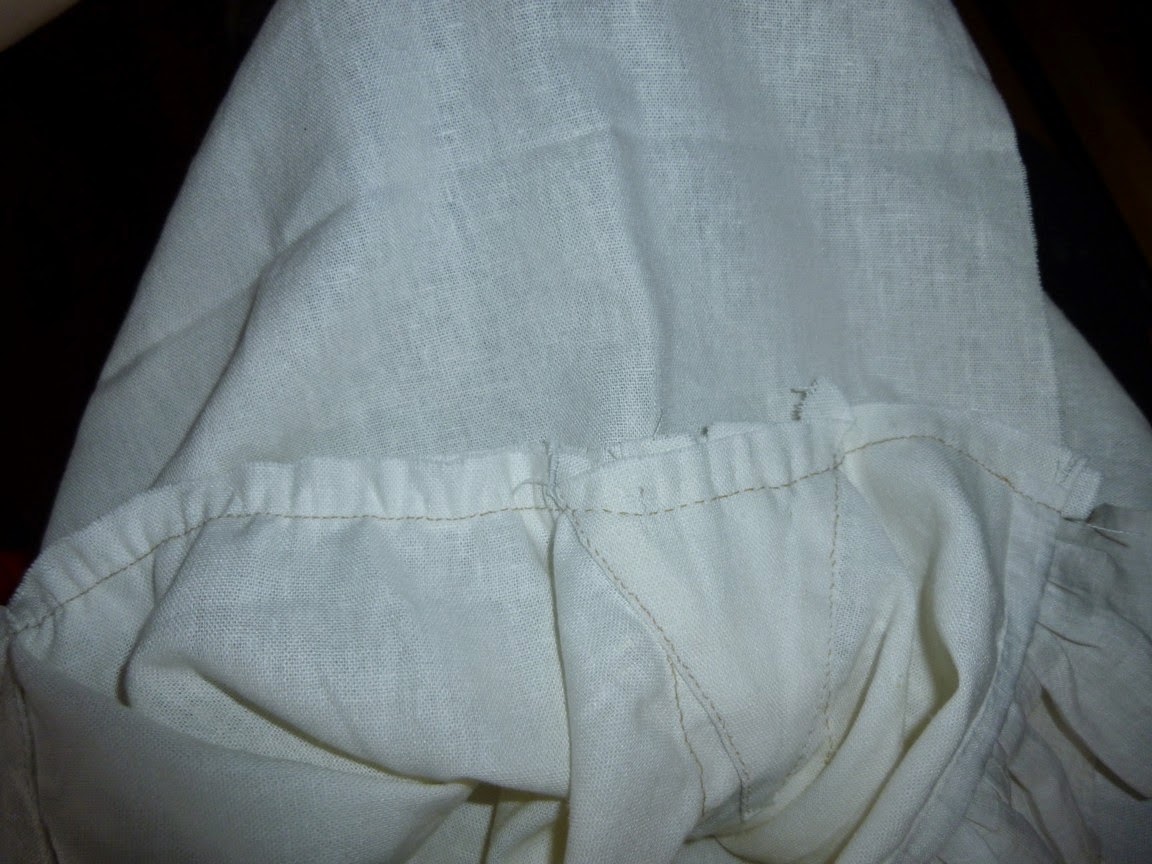 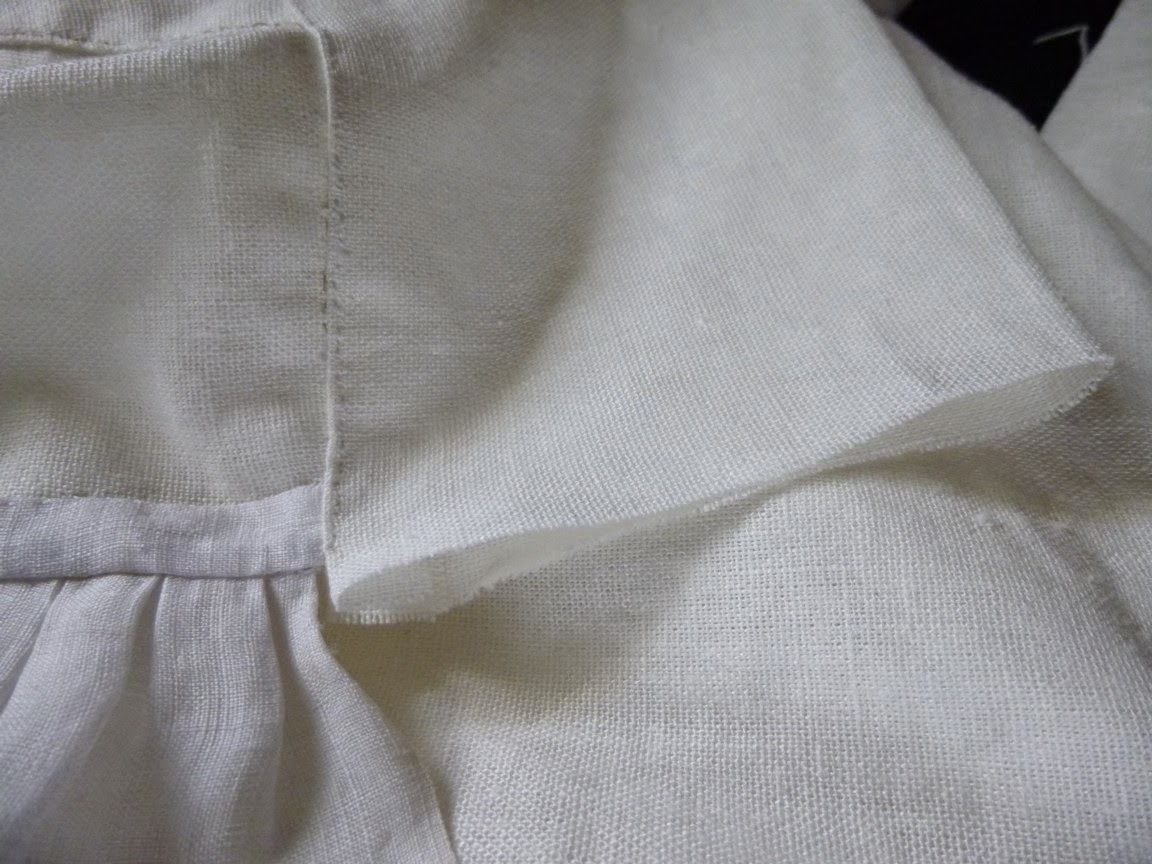 The sleeves were gathered to 19" and backstitched to the shoulders,  leaving 9.5" of sleeve on either side of the shoulder seam. The shoulder reinforcements were stitched onto the same seam, and sewn down with a  running stitch.
I sewed the square gusset in underneath the sleeve, and then sewed up the side seam and the sleeve seam, leaving a 4" vent at the end of each. These seams are flat felled, and all done with a running stitch. 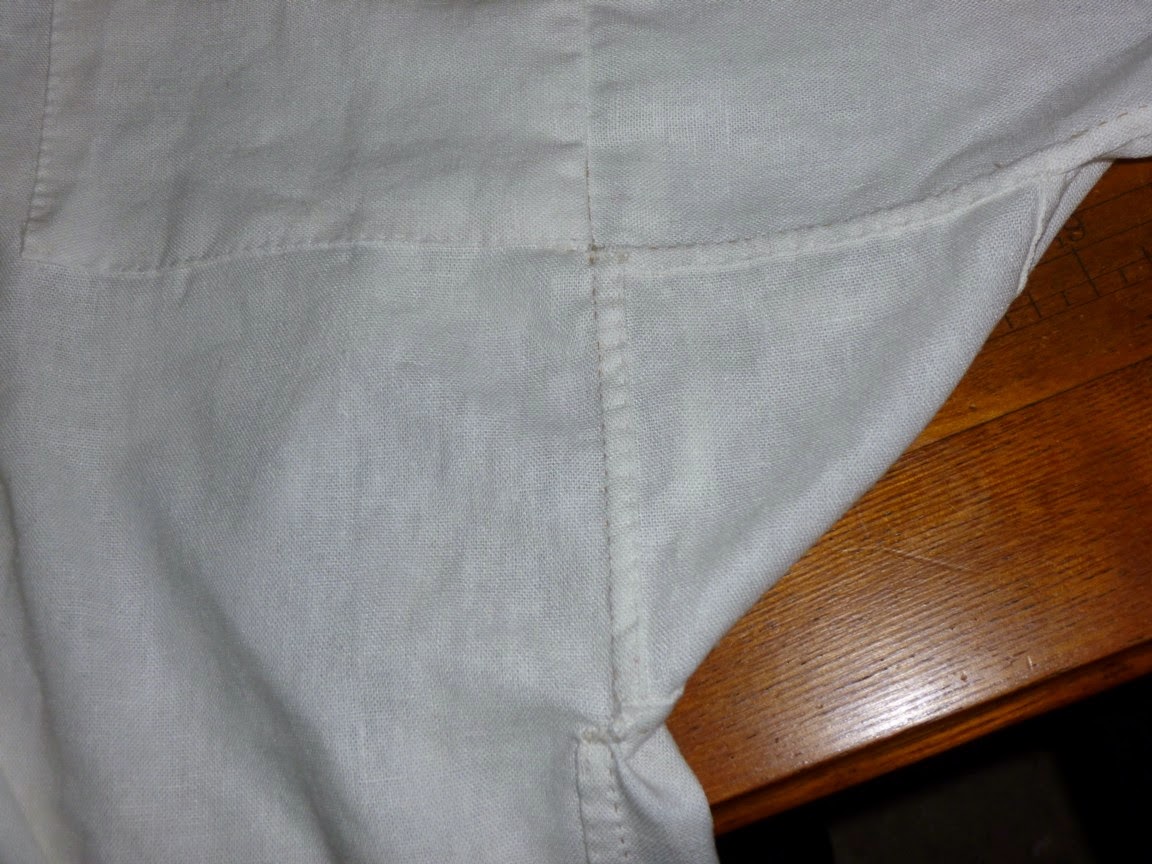 The edges of the vents were hemmed, as was the bottom of the shirt, with a running stitch.
The hem gussets were sewn to the split in the side seam in the same manner as the neck gussets. 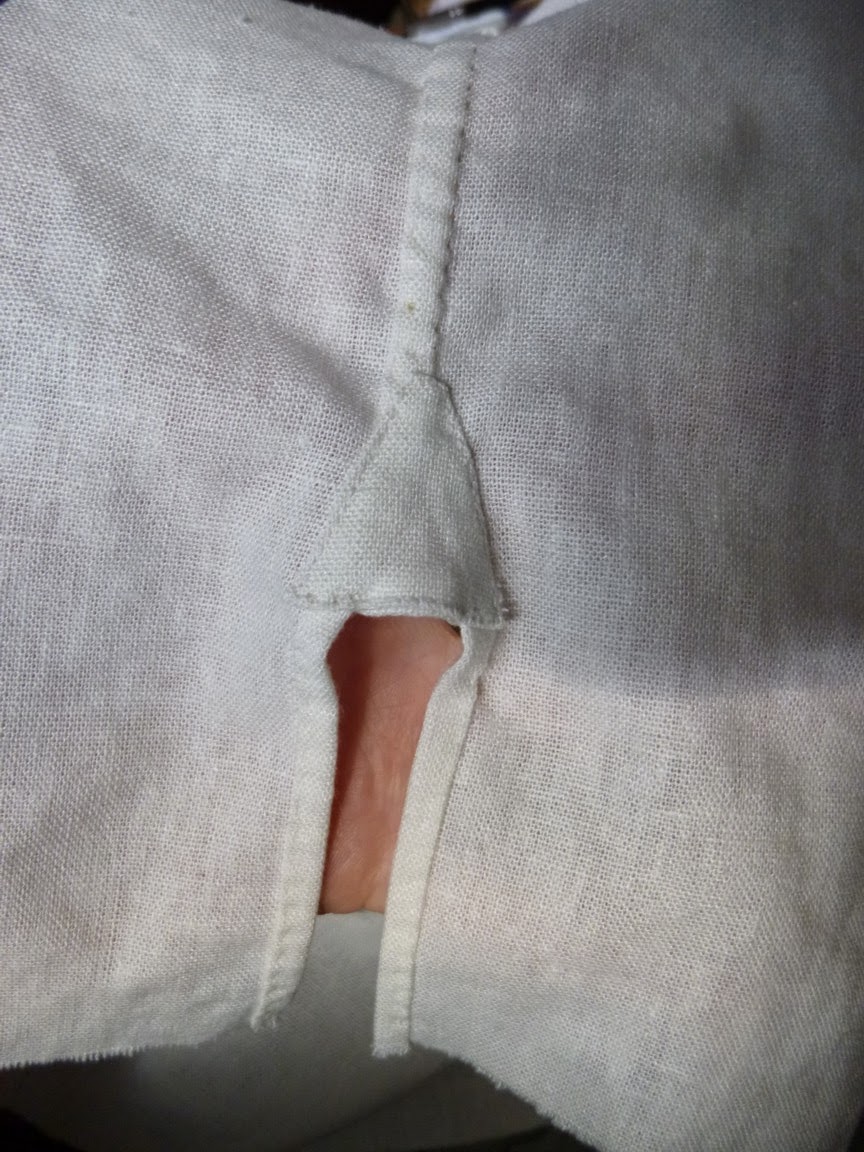 Thanks to post- tropical storm Arthur, our power was out for a week, so some of this part was sewn by candle light.
Flat felling the seams left little raw edges at the corners of the gusset and the place where the sleeve vent starts. I sewed buttonhole stitches over them so they wouldn't fray.
The cuff ruffles were just like the neck ruffles, only cut half as wide and only hemmed on one edge. 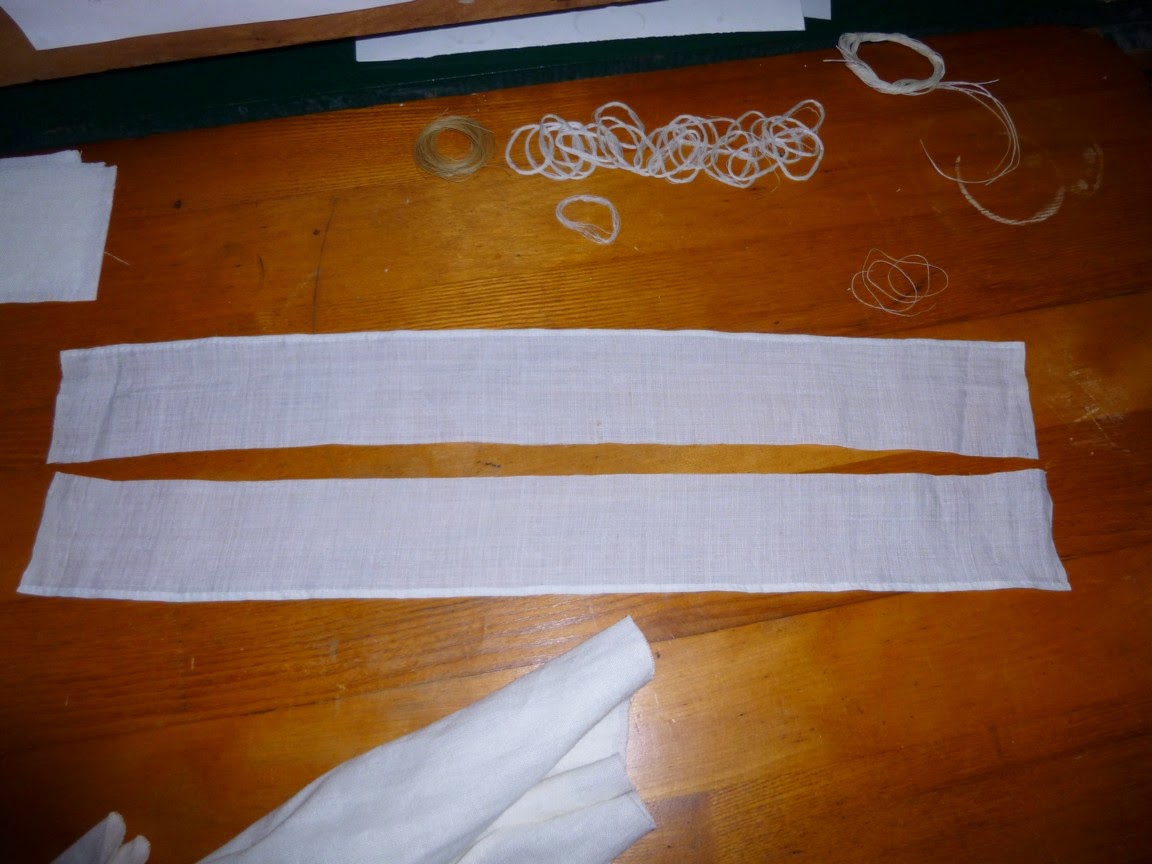 I box pleated them to the cuff pieces. 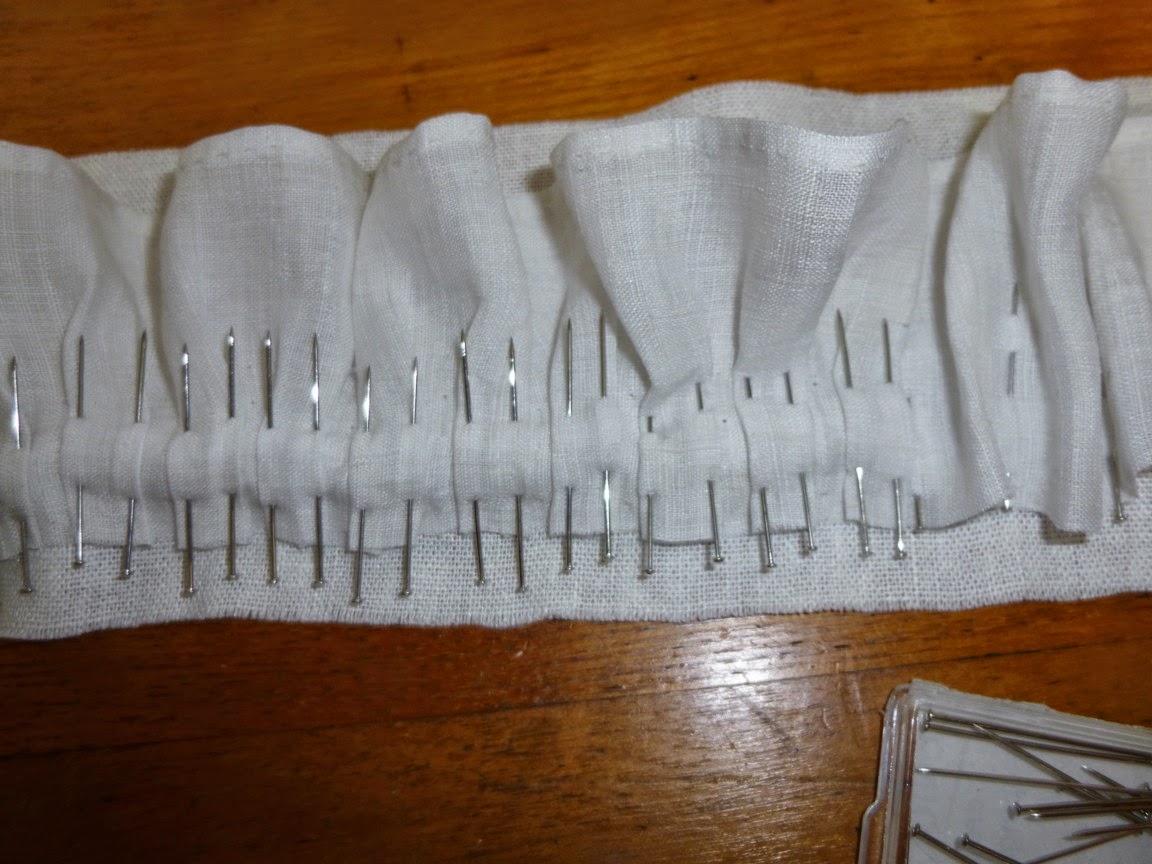 And basted them on. 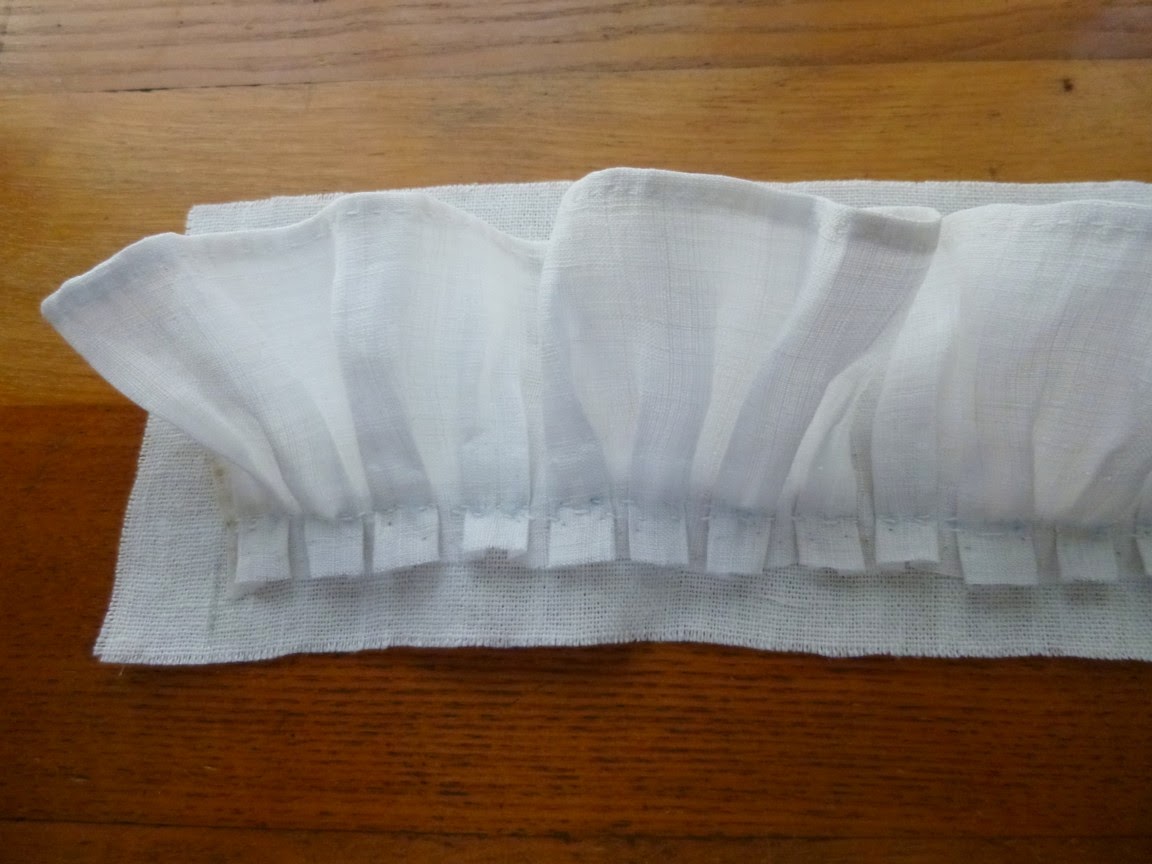 Then I basted the other halves of the cuffs on, so that the pleats were nicely sandwiched. 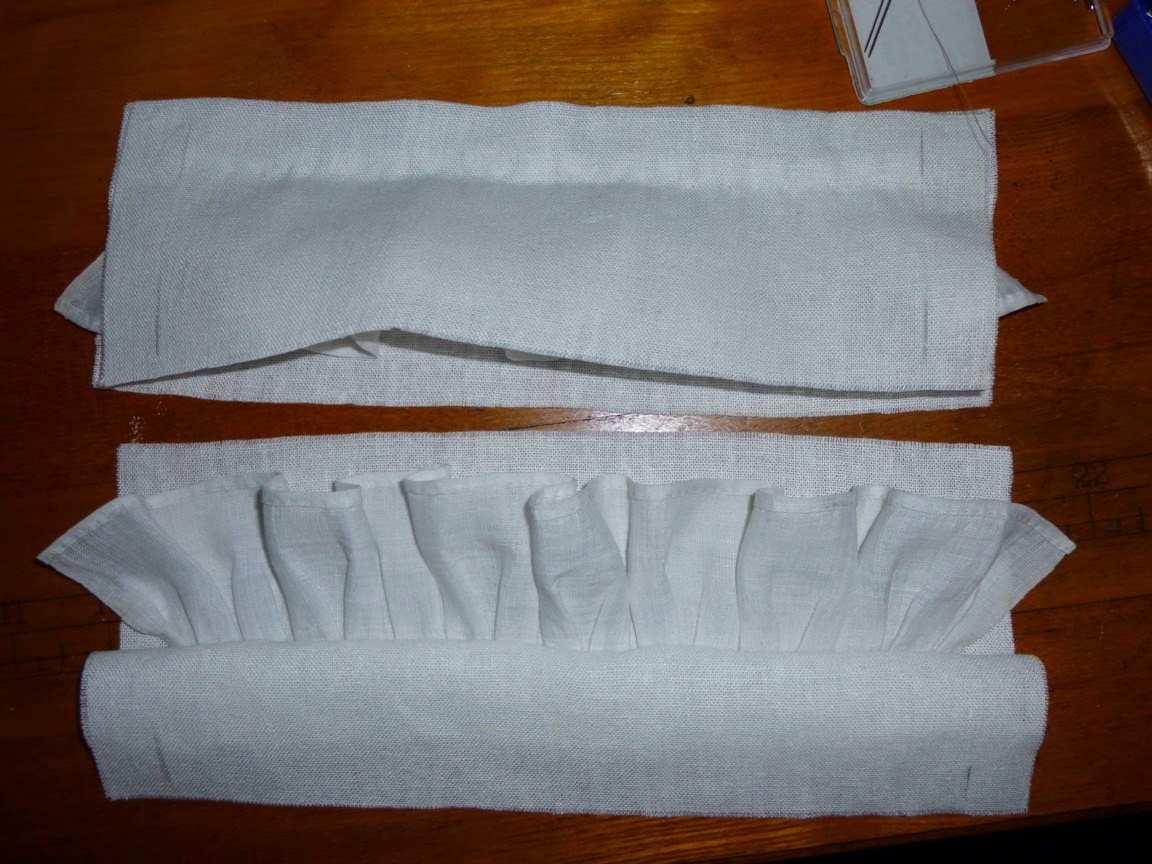 And sewed through all the layers with a backstitch. 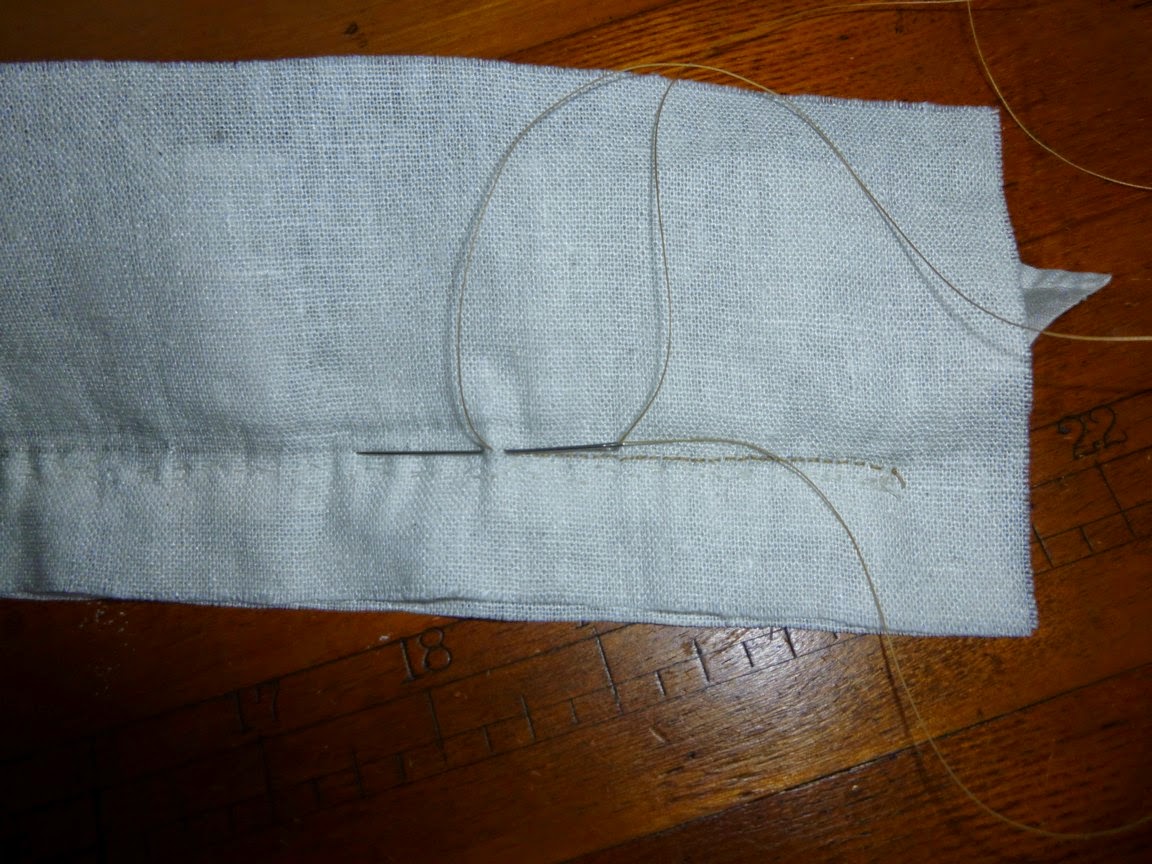 I graded the seam allowances.
The cuffs were attached in pretty much the same way as the collar.

I had to stab stitch the ends of the cuffs closed because backstitching made them look really wonky. 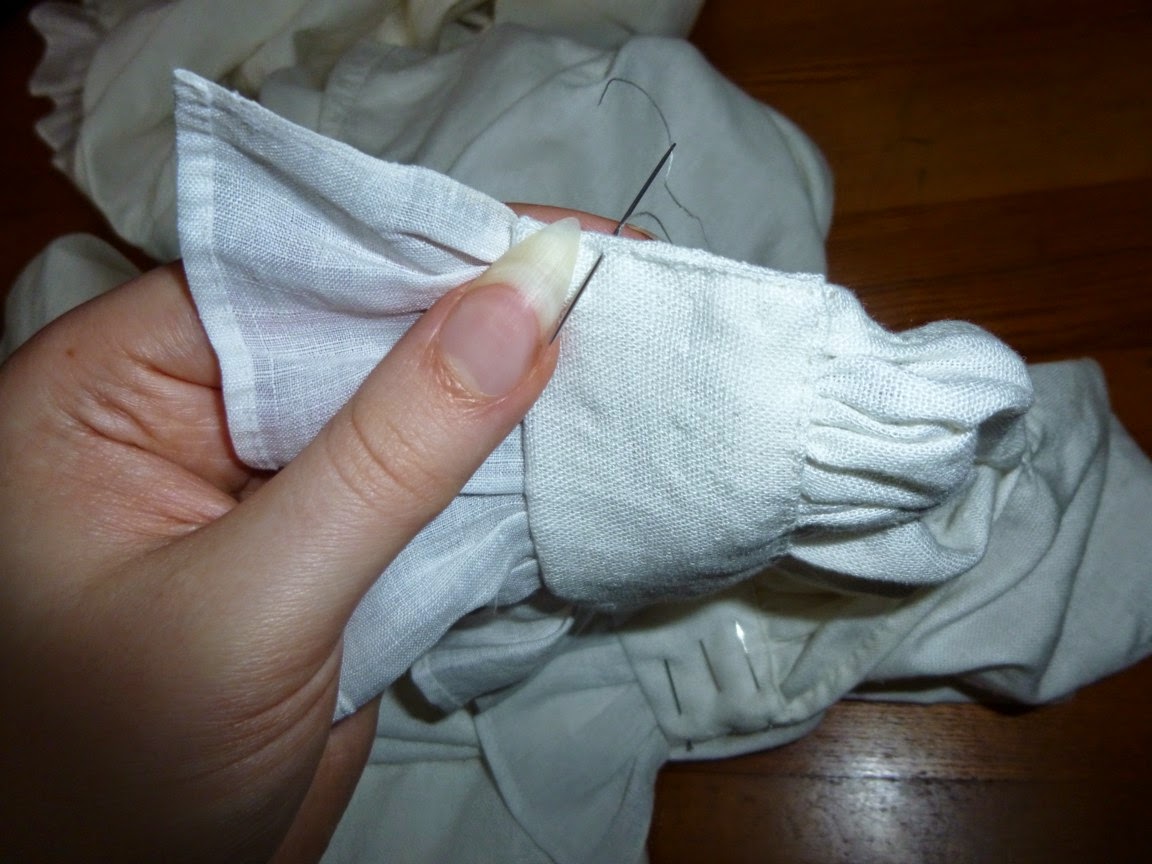 The buttons are thread buttons!
I made them using very thick linen thread. I followed the method shown on this Victorian Tailoring post.
I found a little bone awl in my grandmother's sewing box that was just the right size. 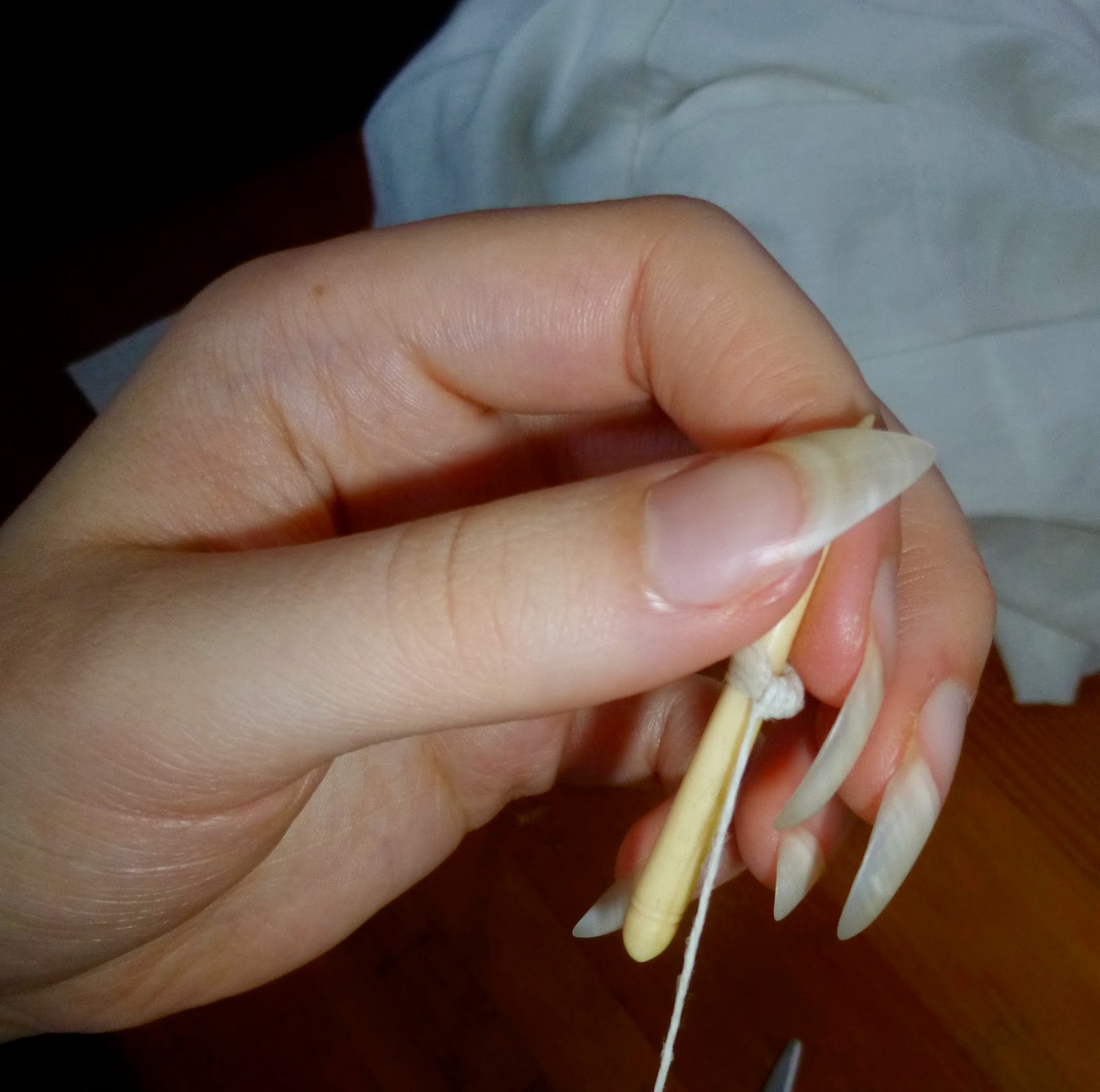 I'm not sure if you're supposed to wax the thread you use for thread buttons, but I did, and it made them very firm. When I stitched the little x on the back I had to pull the needle through with pliers.
There are two on the collar and two on each cuff.
The wax makes them look brown against the white linen, but that's okay since they aren't meant to show when one is fully dressed.
And that's it!
I considered adding a laundry mark(my initials in red cross- stitch) but decided there was no point. Nobody is going to be confused about whose shirt this is, and I can always add one later if I want to. 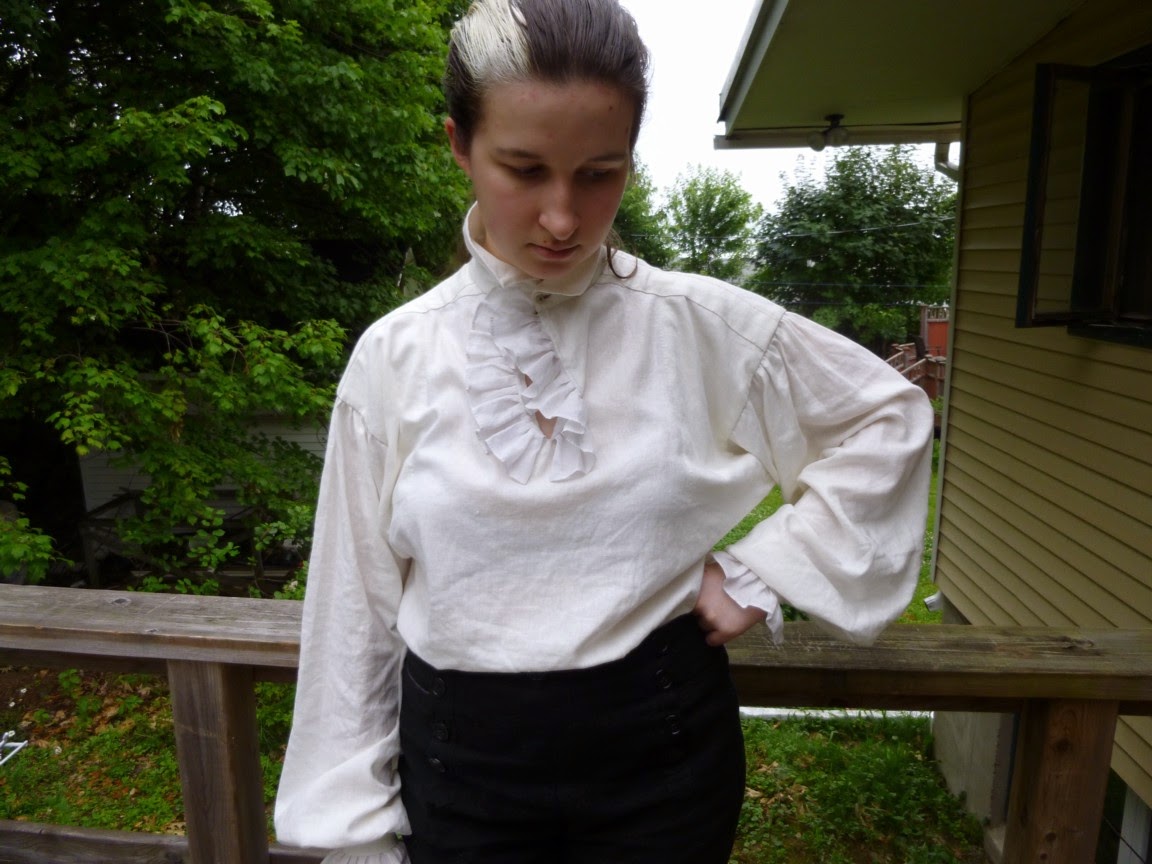 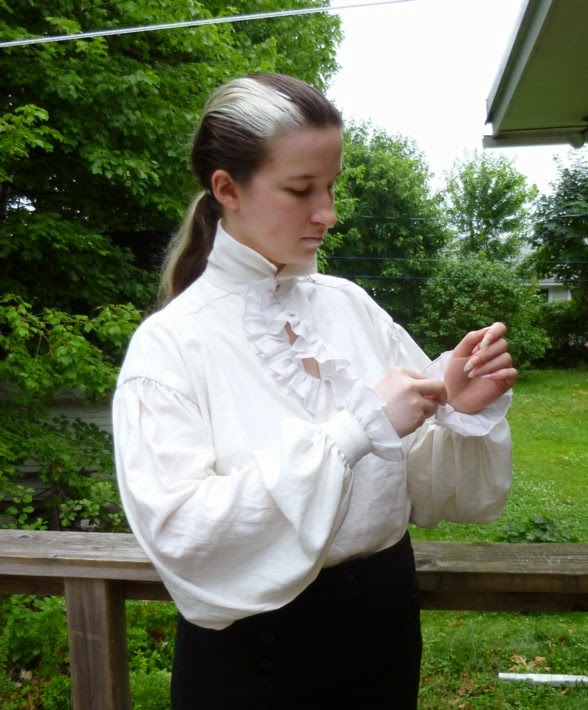 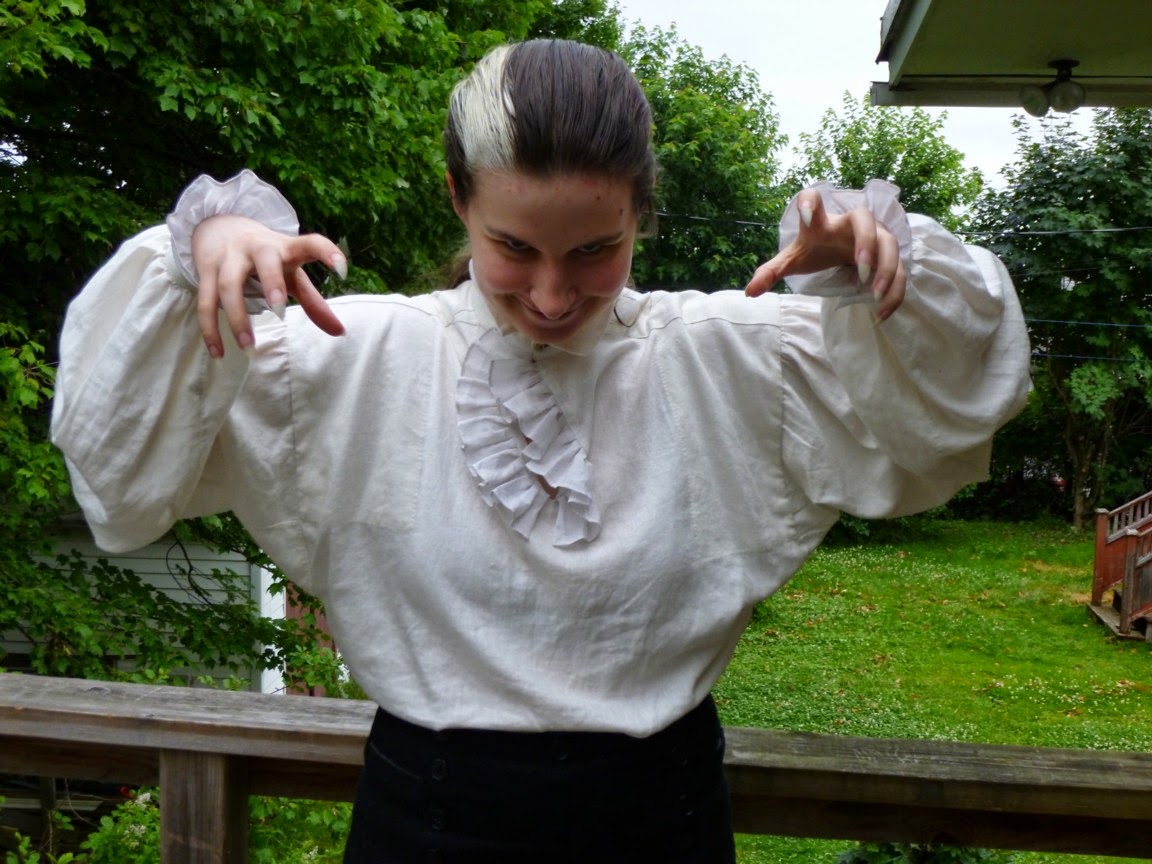 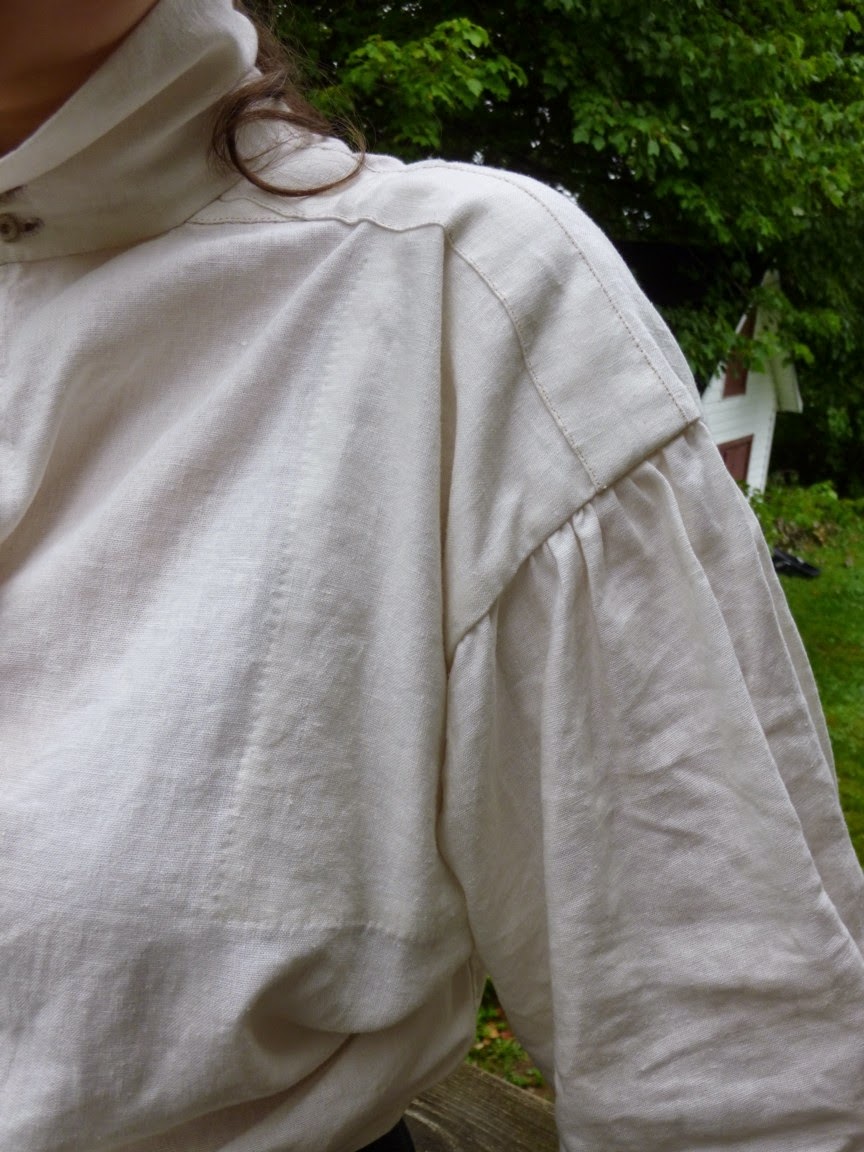 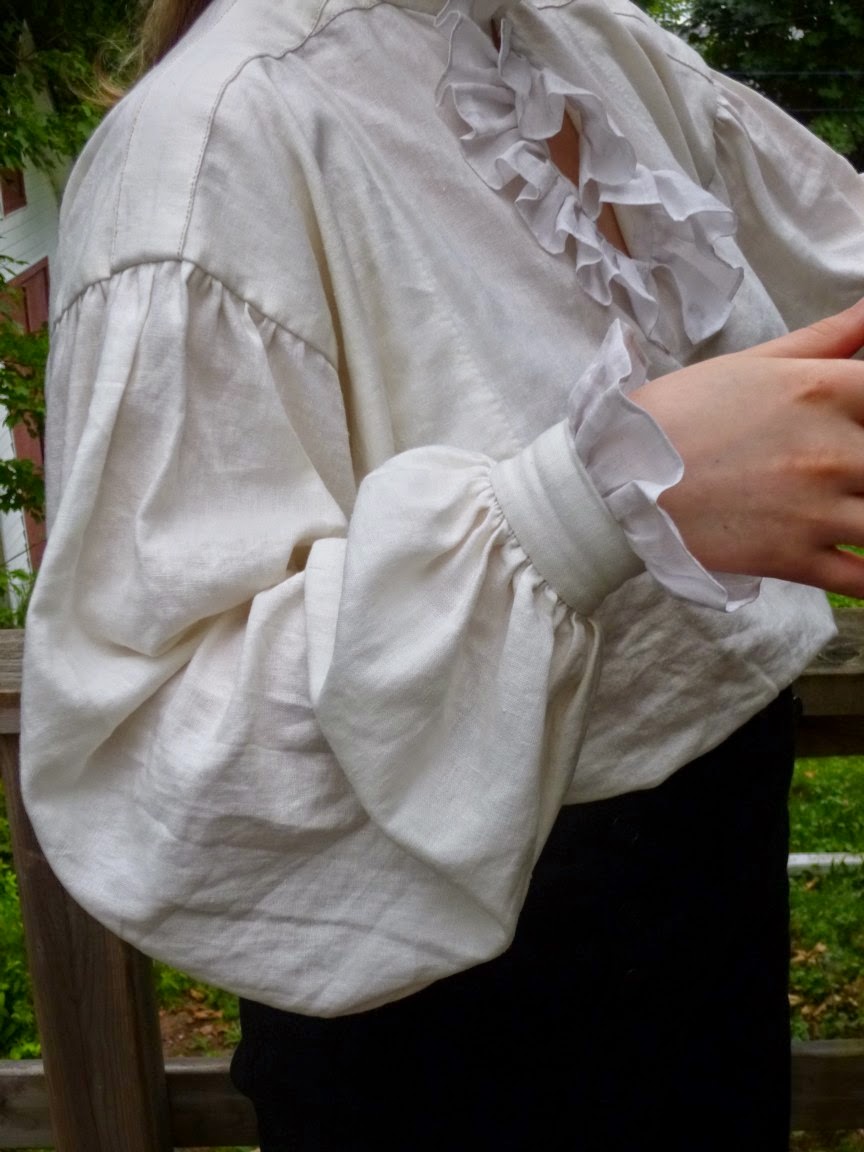 I love this shirt! It's very comfortable, the collar is the right height, and the ruffles look perfect. The ruffles on the previous shirt were far too long. I think these ones could stand to be 1cm longer, but no more. 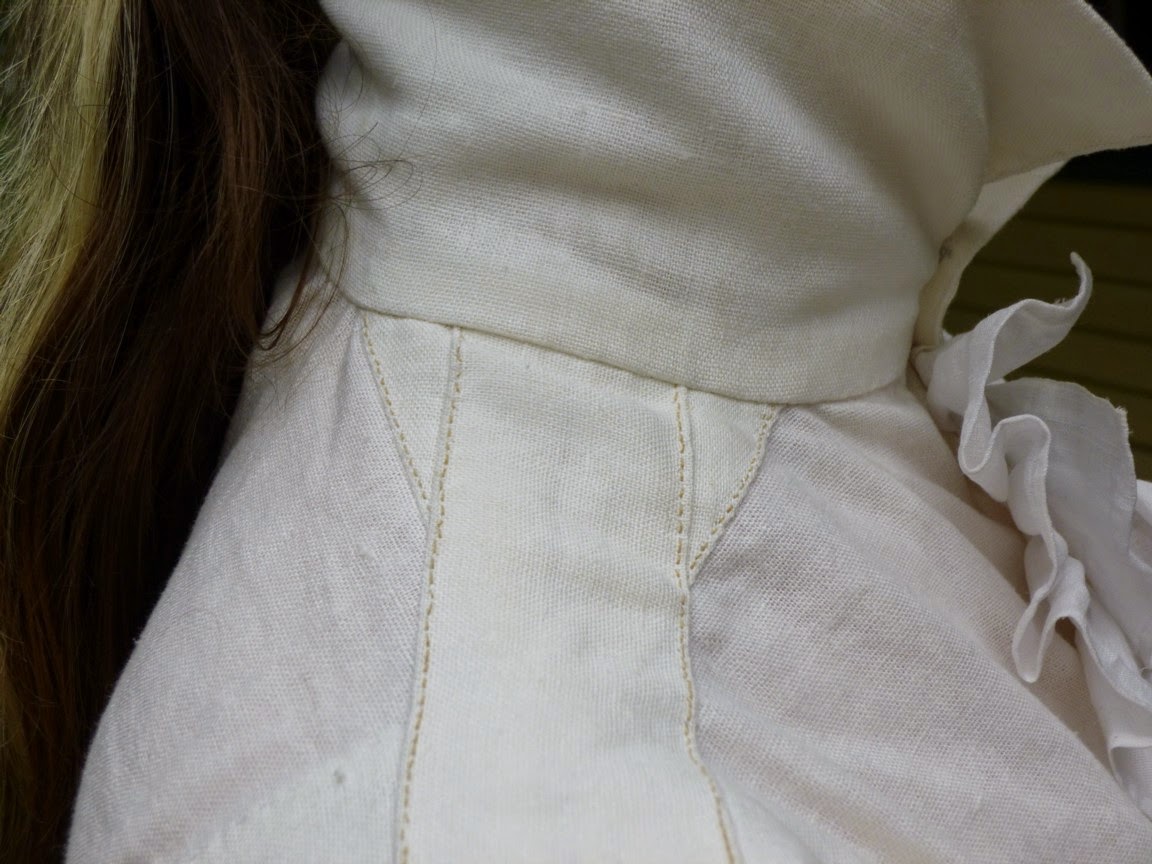 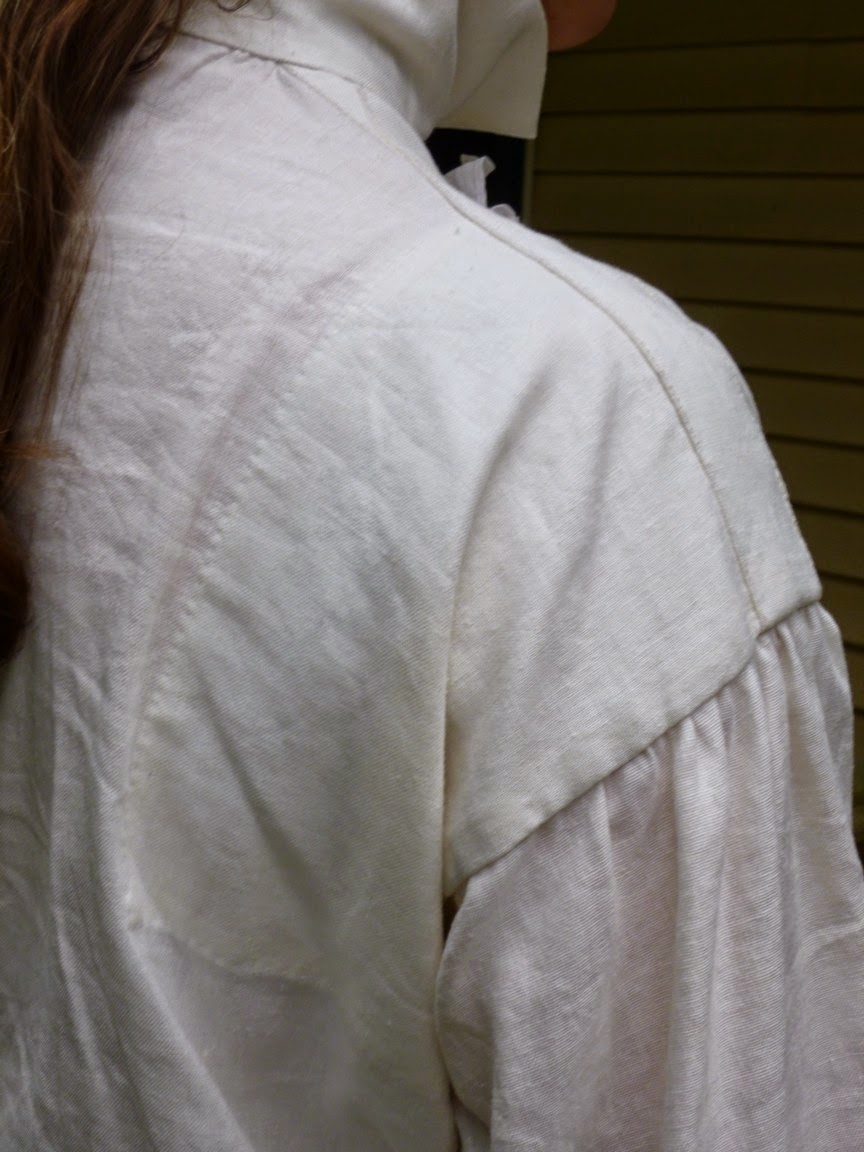 The Challenge: # 13- Under $10
Fabric: Soft linen, crisp probably- linen.
Pattern: From a magazine article, with a few alterations by me. All the measurements are given in the post above.
Year: Second half of the 18th century.
Notions: Thin linen thread, silk thread, thick linen thread.
How historically accurate is it? Very. I can safely say that this is the most accurate thing I have ever made. Edit(Feb. 2020) HAHAHAHAHA, nope! Not accurate for a multitude of reasons!
Hours to complete: Unknown
First worn: July 14th, 2014
Total cost: Less than a dollar. The only thing I bought was the silk thread.
I tried it on with my unfinished coat to see if the ruffles would stick out the right amount, and they did! 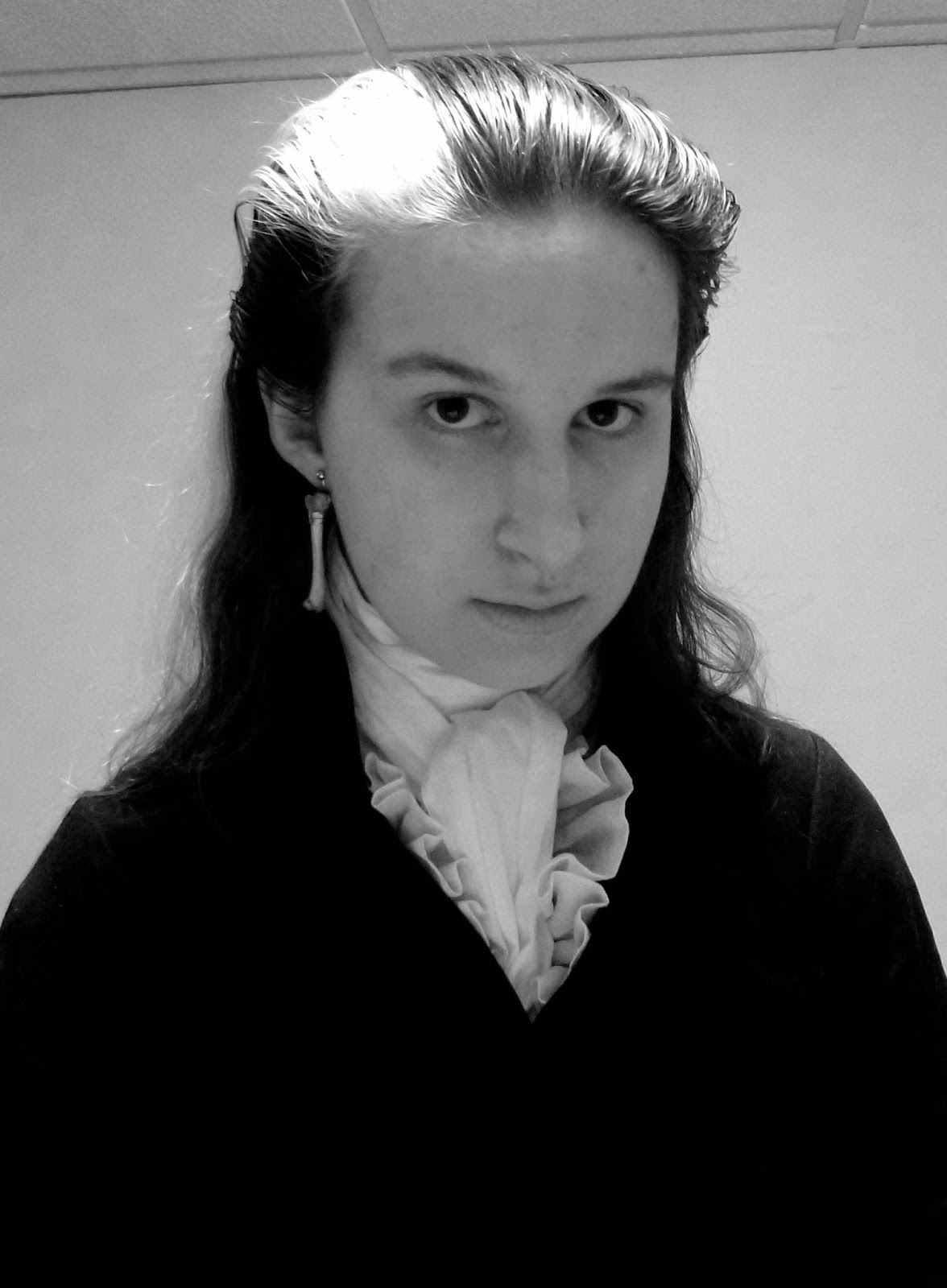 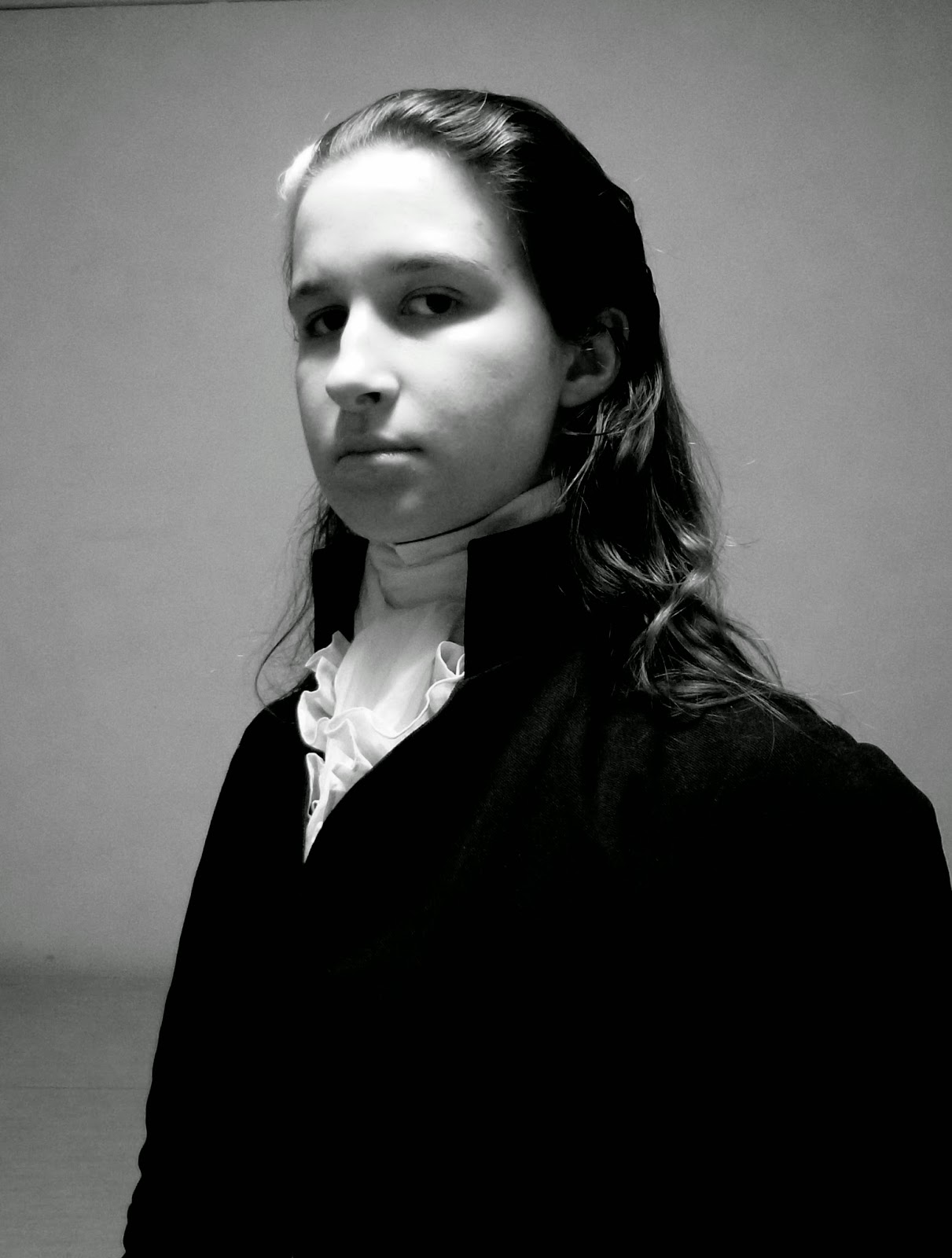 I should look into ordering linen online, because I want to make a lot more of these, and I'm not going to find the appropriate fabric in this city.
Posted by Vincent Briggs at 20:36 11 comments: