My goodness, still terribly behind on blogging.
I made this waistcoat this spring, because the unlined white linen 1770's waistcoat I made a few years ago doesn't fit me anymore now that my posture is so much better. I have some other waistcoats made from the same pattern that I still wear because they're stiff enough to not pull and wrinkle too badly, but that one is so thin that I can't button it up without it looking absolutely awful. 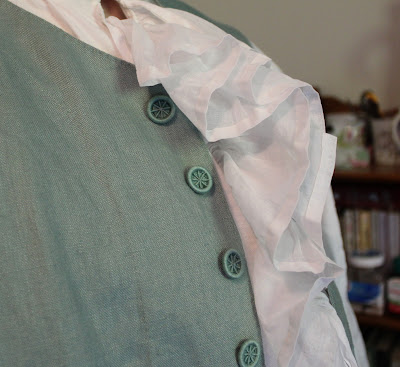 I re-drew the old pattern and added more width to the front, and took a bit out of the back. The fabric is Everyday Linen in the colour Lagoon from Pure linen Envy. (I'm pretty sure green isn't a historically accurate colour for a summer linen waistcoat, but I made this for my everyday wardrobe so I don't much care.) The facings & pocket flap linings are white cotton sheeting I got from my local Fabricville.

The construction is pretty simple, and basically the same as the previous linen waistcoat. I machine sewed the pocket flaps, leaving the top edge open, then turned them right side out and hand stitched that bit closed with silk thread. I also did a little running stitch along the edge, to help keep it flat. 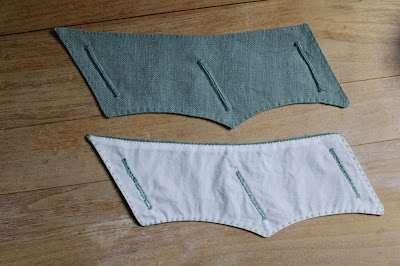 I did 3 decorative buttonholes on each flap with matching DMC cotton pearl. 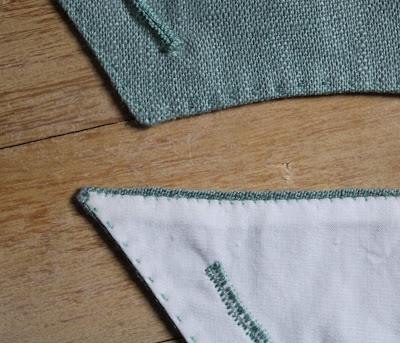 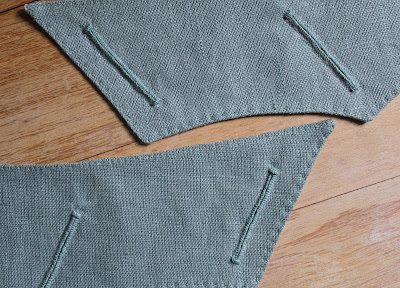 I forgot to take pictures while I was making the pocket. It's a very thin white cotton. I machine sewed one half on all around the opening area, cut it open and turned it to the inside, machine topstitched it, and then machine stitched the other half to the inside.

I wish I'd used a bit of a thicker cotton for the pocket bags, because the one I used was foolishly thin, but since this waistcoat is so soft and unstructured I wouldn't be inclined to put anything too bulky in them anyways. 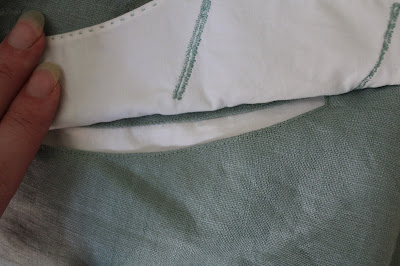 I whipstitched the pocket flaps on with more silk thread, but not until after the facings were done. 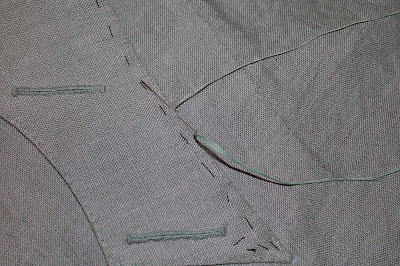 The facings are done in the same way the pocket flap linings. Machine stitched on and turned, topstitched with a small running stitch, then hand sewn to the inside. 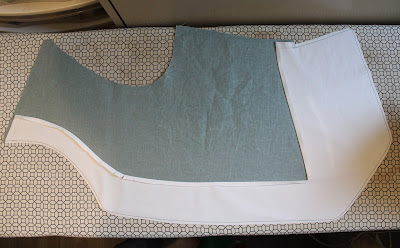 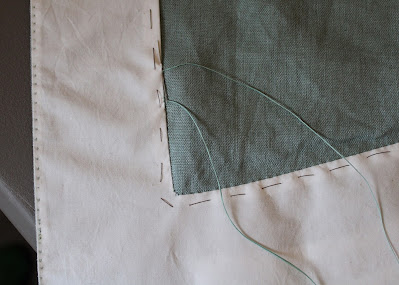 Basting around buttonholes before sewing them is one of those Good Habits that I don't usually do, but I did it here because the linen is a bit shifty. It's also somewhat loosely woven, which is why I used a very tightly woven cotton for the facings.
The buttonholes are overcast in silk thread and then sewn with more of that cotton pearl. 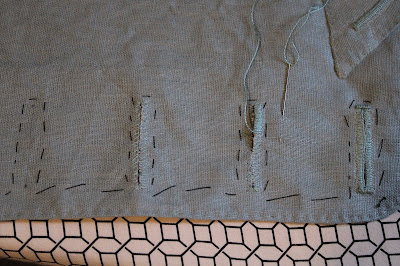 I used the same cotton and some little plastic rings for the 9 Dorset wheel buttons. 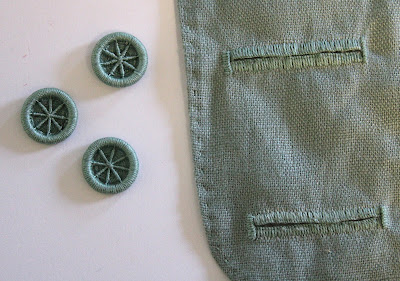 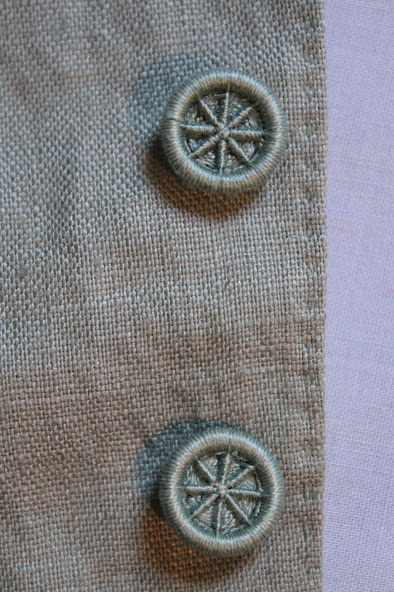 The side, back, and shoulder seams are machine sewn and hand felled. The armholes and the bottom edges of the back are hemmed by hand. 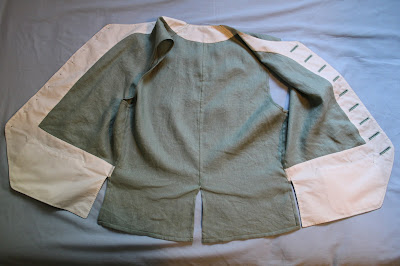 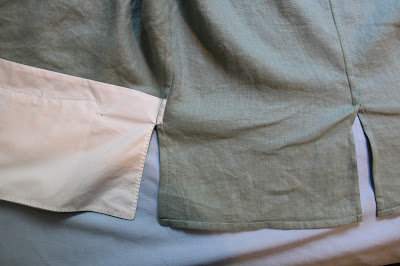 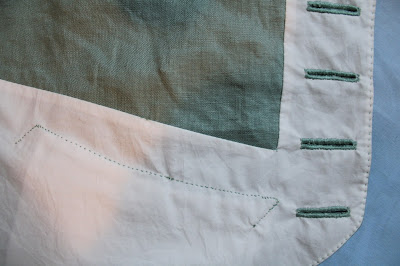 I added a piece of facing to the back of the neck too, to prevent stretching and warping. 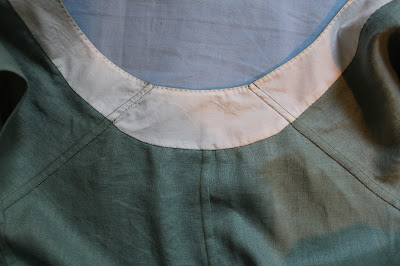 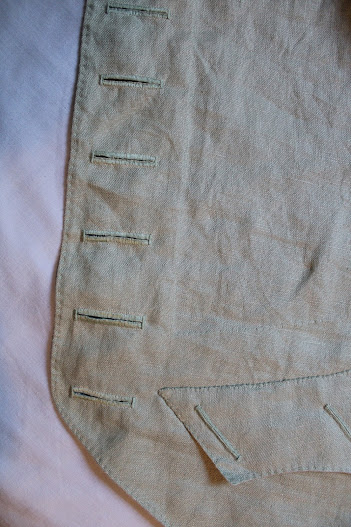 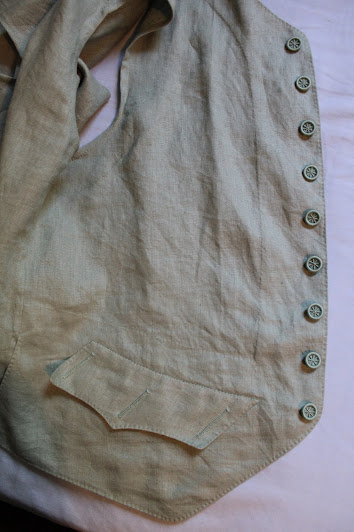 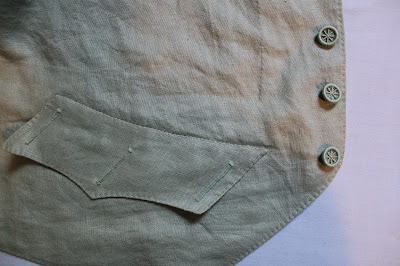 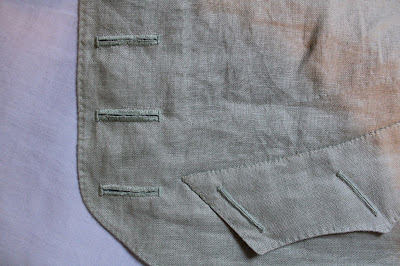 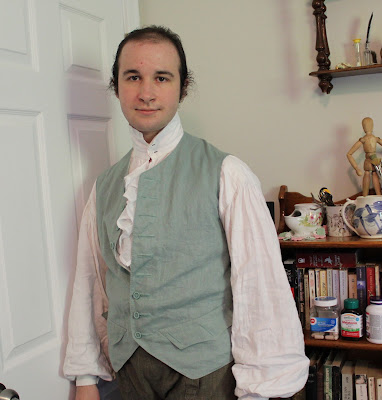 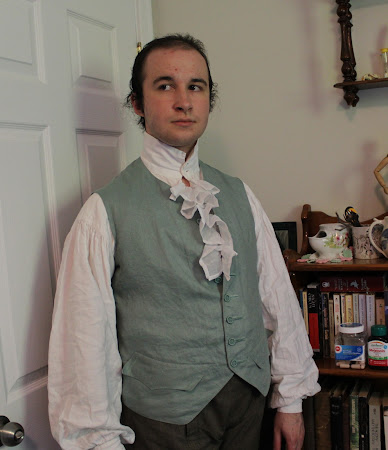 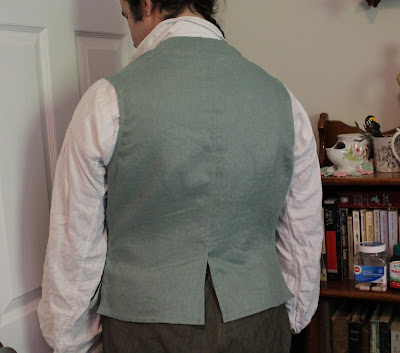 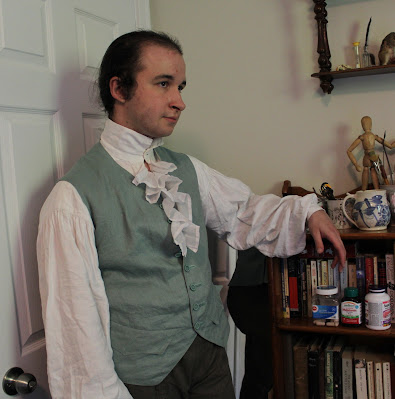 I wore it a bit this summer and I like it, it's one of my favourite colours. I used the same pattern for my Werther's wrapper waistcoat, and it fits quite well, though I may have added just a little tiny bit too much to the front edge.
Posted by Vincent Briggs at 16:54 2 comments: