I made another waistcoat! I finished this one on September 22nd and am mostly happy with how it turned out, though the wrinkled shoulders do vex me. 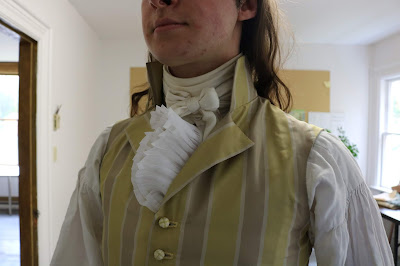 It's made from a striped silk taffeta I bought in Ottawa in the spring of 2018 (on a road trip that I still need to post about...). It's the same stuff I used for part of the lining of my bright green waistcoat. 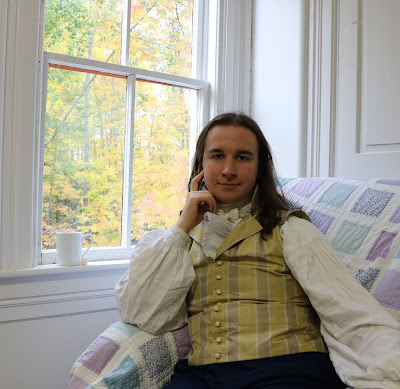 I'd only made two collared late 18th century waistcoats before and wasn't happy with the fit of either of them, so I drafted a new pattern for this one. It's better but I still need to tweak it a bit.
I'm currently working on an embroidered waistcoat that's the same pattern shape, so this one was sort of a trial run, since I hadn't sewn one of these with historically accurate construction methods before. 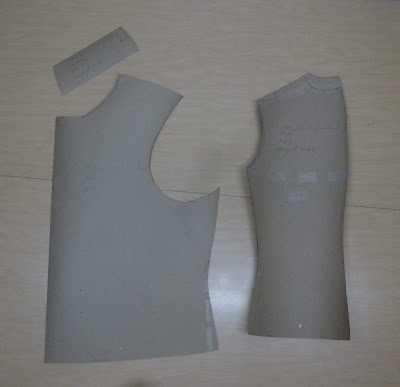 Those other two waistcoats both have little vents in the back and side seams, but most of the extant waistcoats with this cut don't have those, so I made this one closed all around on the bottom edge. I based the pattern somewhat on the one in The Cut of Men's Clothes, but I had to make mine much curvier to fit around my hips.

I pieced the back out of 6 scraps of brown linen. One of these seams is two selvedges butted together and whipstitched, because this linen had nice firm selvedges. You can just barely see it on the left side of this photo.
(I also pieced a little bit of different linen to the topmost corner of each of the silk fronts, to make the cutting layout more efficient. This was not at all necessary, I just really like piecing and saving on fabric.)
For the buckram interfacing I stiffened some cotton muslin. The lining is a pale green cotton sateen that I got at the fabric swap in January. 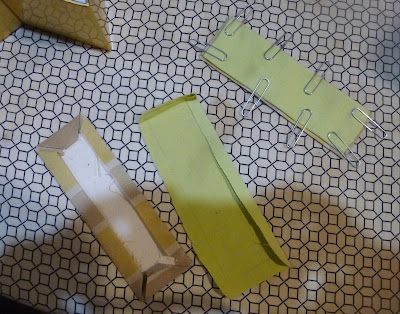 I hadn't done waistcoat pocket welts using the 18th century method before, but it turned out to be very easy. As with with bigger pocket flaps, you line them first and then just stick them on.
The pocket bags are the same green cotton as the lining, and the openings are reinforced with another bit of buckram. 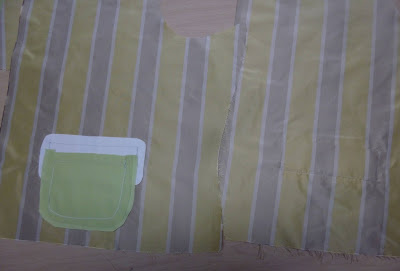 There are only 3 machine sewn seams in this waistcoat - the pocket bags and the centre back of the lining. 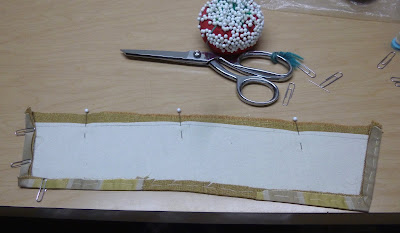 For the collar I used two pieces of silk for the front edge, and another scrap of linen for the centre back. I folded the edges in around a piece of buckram and lined the collar in 6 silk scraps.

I cut little facing bits for the lapels and stitched them down to the green cotton lining.

The one other time I made a waistcoat with these little lapels I was very confused as to how they were stiffened, but I have since obtained a copy of Costume Close Up, and learned that the lapels aren't stiffened at all! The buckram on this style of waistcoat stops just above where the buttons end.

I wasn't sure how exactly the buckram was supposed to be attached with this sort of waistcoat, so I tried tacking it to the lining this time instead. It worked well enough but I don't think I'll do it that way again, as it made the lining a little bit awkward to sew in along the front edge.
As far as I can tell from photos, I think the front lining is sewn on just the same as it is on earlier waistcoats, but a bit more carefully around the lapel. I used off-white silk thread for this. 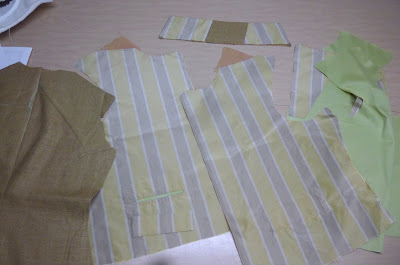 It was a bit fussy to press the edges in so the lining and outer fabric were the same size.

I was so economical with my cutting and piecing that I didn't have enough scraps to cover my buttons. There were a few more little ones that hadn't made it into the collar lining, but I ruined those with a lot of pen markings doing samples for another thing, and they probably wouldn't have been sufficient to cover all 8 buttons anyway.

I could easily have cut button covers from my remaining yardage (I have about a meter and a half left) but I decided to try teeny tiny matching deaths head buttons instead. I used the second smallest bone moulds from Burnley & Trowbridge, and the finished buttons are about 12mm. 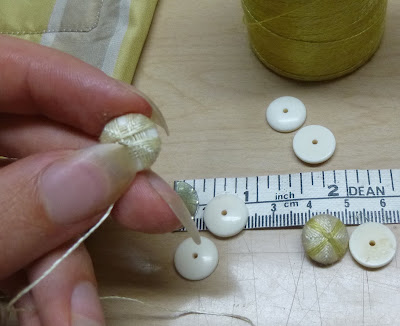 I covered them with fine linen yarn from my mothers stash, in off-white and pale yellow.
They were quick to cover, and not difficult to do, but holding onto them did cause some finger cramps.
I think I was inspired by the little deaths head buttons that appear on several of the waistcoats in Waistcoats From the Hopkins Collection.
I sewed the buttonholes through all the layers, after lining the fronts. I felt like this made more sense for this style of waistcoat than the usual earlier method, and photos of the inside of two different waistcoats from the aforementioned book show buttonholes sewn through all the layers.
They're sewn by hand with yellow DMC cotton pearl. 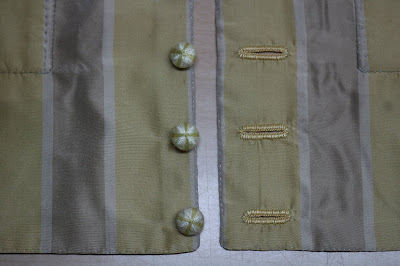 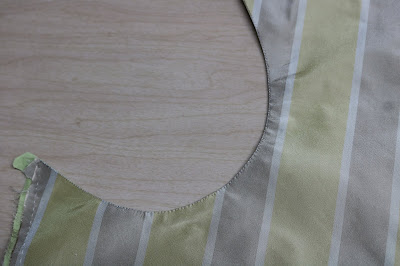 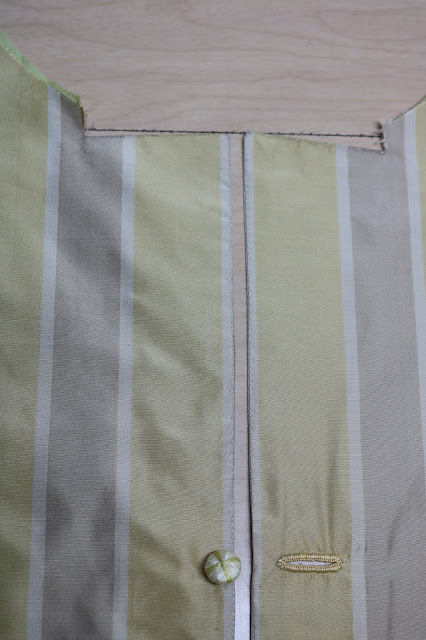 I backstitched the side and shoulder seams with linen thread. 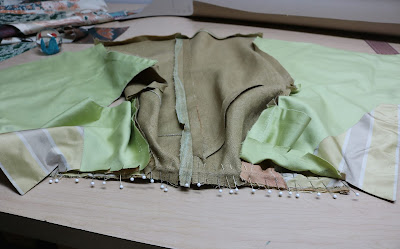 I pinned the collar in place, basted it in with a running stitch just to be sure it was sitting correctly, and then backstitched it in. 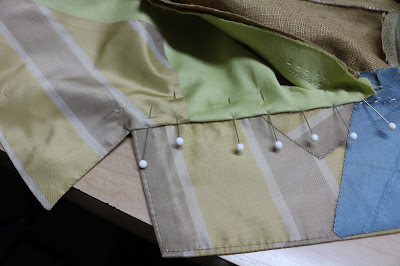 I folded the neckhole bit of the front lining carefully over the collar seam, stitched it down, and popped in the back lining last, as usual. 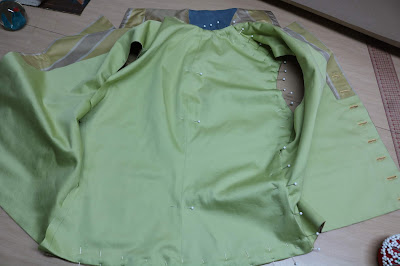 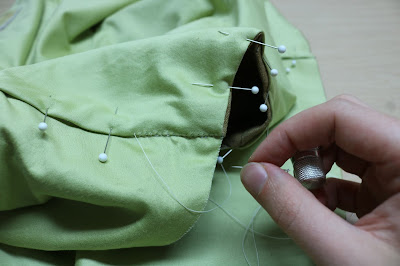 Finished! In pretty good time too. I can't remember exactly when I started it but I think I did it within the space of about 3 or 4 weeks. 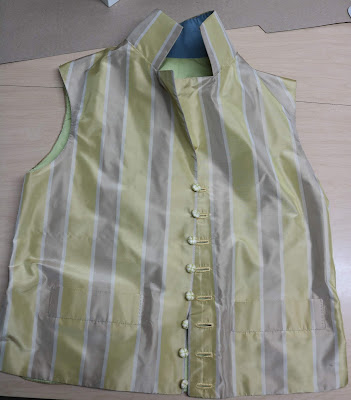 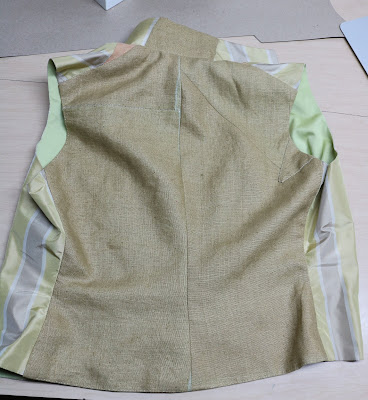 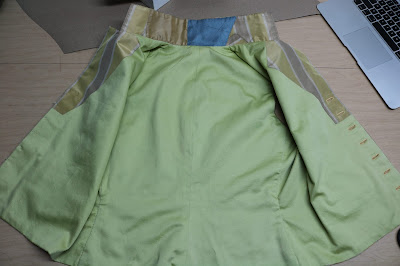 I hadn't started this with the Historical Sew Monthly in mind, but seeing as it's fairly plain I decided it worked for September's "Everyday" theme. 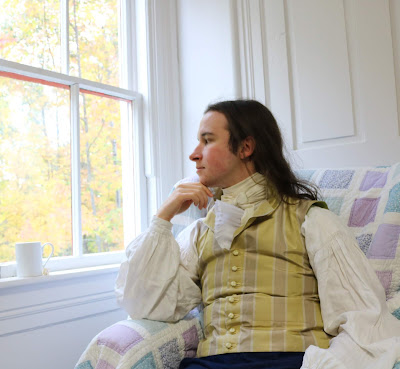 What the item is: A man’s waistcoat

How it fits the challenge: It’s pretty plain and informal, and I do intend to wear it for everyday.

Material: Silk taffeta striped in dull yellow, beige, and off white, brown linen for the back, pale green cotton sateen for the lining, and two different silk scraps that were used in the collar lining.

Pattern: My own, based mostly on photos of extant originals.

How historically accurate is it? Pretty good! It’s hand sewn except for 3 seams (the pocket bags, and the CB seam of the lining), I think I got the cut pretty good, and the materials are mostly accurate except for the lining. All the piecing makes it more historical too.

Total cost: I bought the button blanks, the silk, and some of the thread. The lining was from a fabric swap and everything else was given to me. I used so little of the silk that I doubt the whole thing came to any more than $20 Canadian. 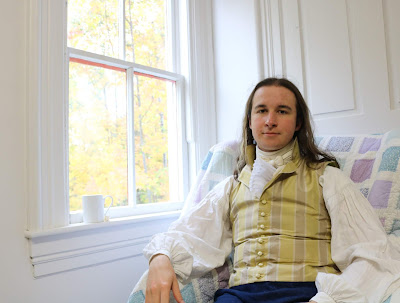 I took these photos with a self timer in the old house I was doing an artist residency in last month. It was a nice, quiet time and I got a lot done on the embroidered waistcoat I mentioned earlier. 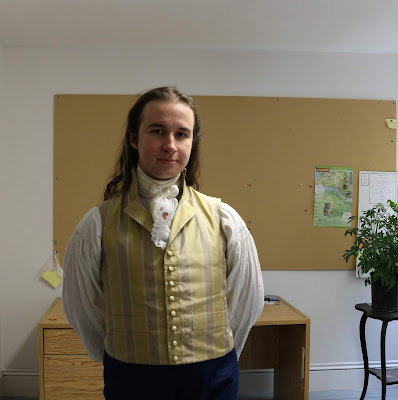 I will have to make some changes to this pattern before I sew it up again, particularly the shoulders. Since I drafted a whole new pattern mainly because I was annoyed by the wrinkled shoulders of my previous waistcoats, it was disappointing to have them turn out wrinkly again. 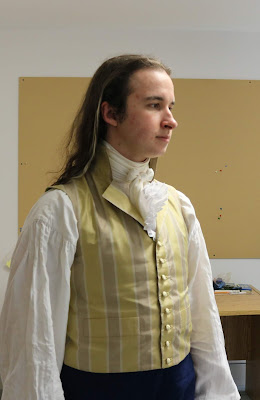 I think I need to scoop out the side of the neckhole a bit more, and to not make the shoulder seam straight. It ought to fit the shape of my shoulders better, I think. Next time I should try adding a little triangle insert piece like you see on so many extant waistcoats. I'll also change the centre back of the collar so it's tapered just a little more, as I think it sticks out from my neck the tiniest bit too much. 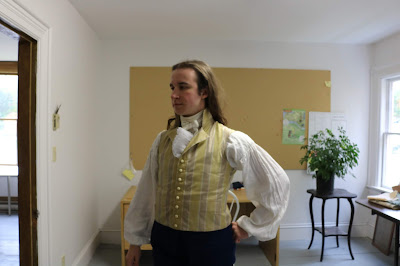 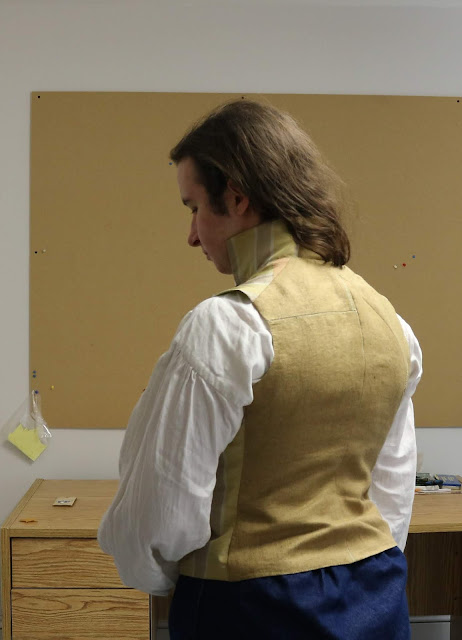 Here it is with a coat I finished in August but still haven't blogged about yet. 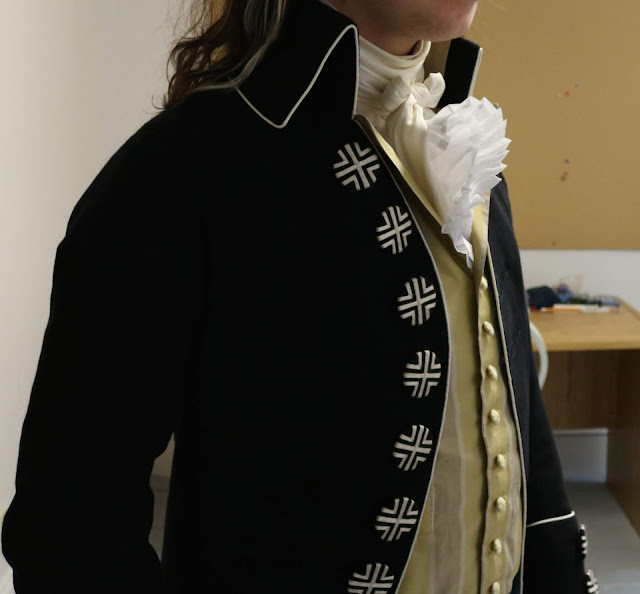 But I just got some good photos of the coat this weekend, so I will post about it soon!

(I am now working on the waistcoat for my 1730's suit, but still haven't started the breeches.)
Posted by Vincent Briggs at 11:48 3 comments: