18th century shirts are my very favorite kind of shirts, and I have not worn any other sort of shirt for several years. And I need to make more of them, because I intend to keep wearing them indefinitely!

But I want to try making some modern-ish shirts too, mainly because I have too much cotton print in my stash. (Most of the cotton prints are ones I know I didn't buy, and have no specific memory of obtaining. I think they breed.)
I don't expect to wear the modern-ish shirts very often, but I think they'll be useful to have on hand, especially for things that might damage or stain my nice white linen.

I say modern-ish because I just can't do a 100% modern button up shirt. They have so many qualities I hate. They're too fitted! Tapered sleeves and curved side seams and shaped sleeve heads, blagh!
They also sometimes have pockets on the front, which I think is weird for a shirt. And vertical buttonholes are insufferable little bastards that I want nothing to do with.

So I made myself a shirt pattern that I hoped would avoid all these problems, and after one mockup I sewed it up so I could properly work out the fit and construction. This shirt isn't terrible but I still have a few tweaks to make to the pattern. I will post a picture of the pattern the next time I sew it up. 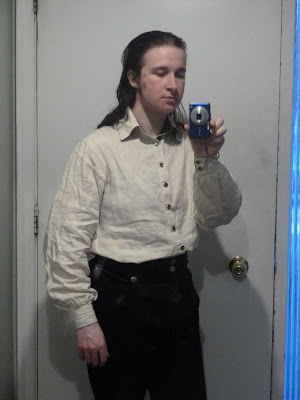 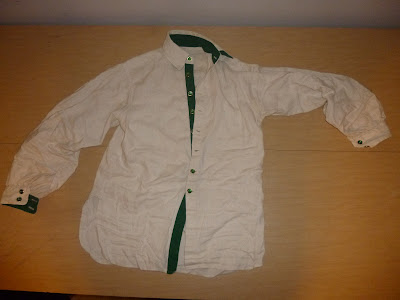 I vaguely based the pattern on a regular modern shirt pattern that I copied for a friend, but I changed every piece so much that the shapes look more like the 1870's shirt from The Cut of Mens clothes than the original shirt. 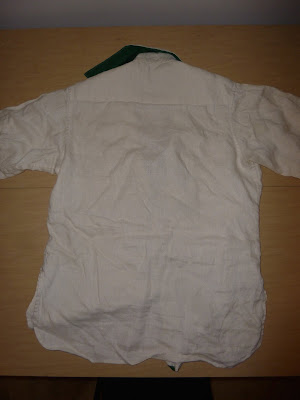 The cream coloured fabric is a mediocre linen I got from my local fabric store some time ago, and the dark green is cotton. I added the green so it would go with the green and gold buttons I used, though I think it may have been a few too many green pieces.
Everything is machine sewn except the inside edges of the cuffs and collar.

I have several complaints about the pattern. The most noticeable one is that the placket is too narrow. I forgot to consider the fact that I prefer horizontal buttonholes, and so the ends of them are butted right up against the folded edge of the placket. It's not very visible from a distance, but looks terrible upon close inspection. 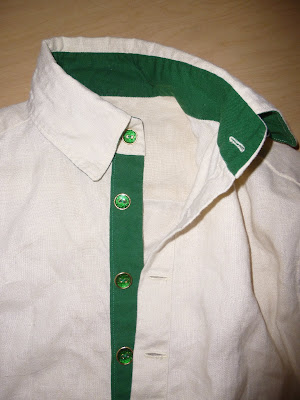 There are no underarm gussets, but I still put the little triangular ones on the hem slit. They're too important to leave off! 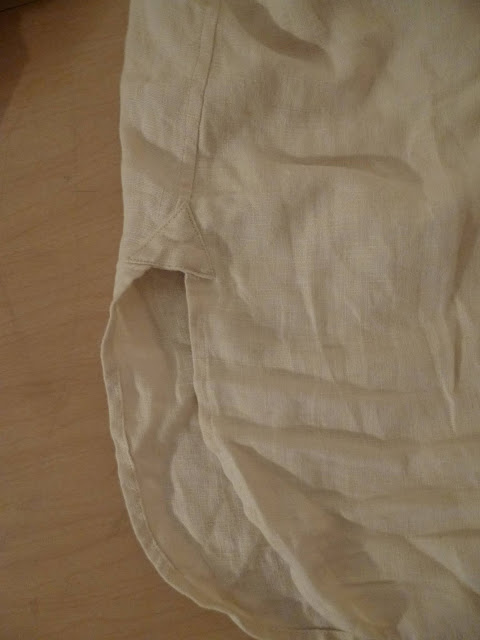 Besides widening the placket, I also need to lengthen the sleeves a bit, and add more width to the back piece. When I was tracing out the pattern I foolishly forgot to make the back piece wider than the yoke so I could do some pleats or gathers or something, and as a result it feels very strained when I stretch my arms forward.
The upper collar also need to be a slightly different shape, because it doesn't sit as nicely as it should, and I'm not happy with the way it looks when buttoned up. 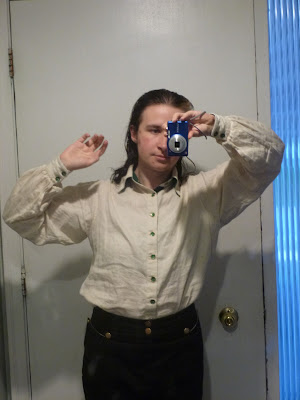 I have (very grudgingly) decided to add a small placket on the sleeve next time I make this kind of shirt instead of just making the gap in the bottom of the sleeve seam. I put shiny contrasting buttons on the cuffs and they're underneath my wrists where nobody can see them! 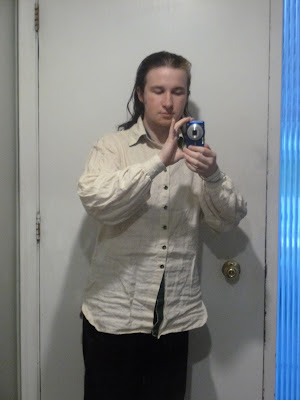 I have at least 4 or 5 pieces of cotton that are big enough for shirts and that I have no other particular use for, but I'm not sure when exactly I'll sew the next one up.
Posted by Vincent Briggs at 16:25 3 comments: