A little over a year after making a Death's head button video, I've made one on cloth covered buttons too!

The first time I made a coat with covered buttons, way back in 2014, I didn't know you could buy button moulds so I used discs that I sliced off an old hardwood chair leg with a hacksaw and whittled and sanded down. (And the chair leg was tapered, so I had to whittle some down a lot to make the size consistent.) Much better to just buy wooden discs.

I've ordered wood and bone moulds from them a few times, and I love this shop and I think the people who run it are very nice, but I have to be honest and say that I don't think the small wooden button moulds are very good quality (especially for the price they are). The edges are quite thin and the grain of the wood very large and a bit splintery, so sometimes the edges are a bit rough, and I usually sand them down before using them.
(B&T if you're reading this I am sorry!! I really love most of the stuff in your shop, and also your youtube tutorials! I just do not love the smallest size of wooden button mould.)

The bigger wooden moulds are better though, and the bone ones vary in thickness but I like them. I also got my fine linen sewing thread from there. I haven't got any of the horn moulds but they look really nice in the photo.

Wooded Hamlet Designs - They appear to just have thick domed wooden ones in 3 sizes.

Gina B Silkworks - Haven't bought any of these but it looks like there's a good variety of shapes and sizes.

Wm. Booth Draper - Wood and bone moulds that look similar to the Burnley & Trowbridge ones, but I haven't bought any of these either.

Etsy shops with wooden discs & beads that are also good for covered buttons:

The stock in these sorts of stores can change quite a lot, so some of these links might not lead to button moulds if you're reading this sometime in the future. I got a lot of big 1.5" discs for coat buttons from SnugglyMonkey a few years ago, but they haven't got any right now. I have found the same discs in a few other shops though. Searching for "unfinished wood disc" or "flat wooden bead" or similar ought to bring up plenty of button mould options.

Like I mentioned in the video, I find these are much more affordable than the ones specifically sold as reproduction moulds, and often come in a wider variety of sizes. The reproduction moulds are sold individually, but these come in larger amounts.

TownletBead - SO MANY wooden discs and flat wooden beads and domed half-ball shapes! Such a wide variety of sizes! The ones I got were really wonderful smooth hardwood, and perfectly uniform. (Except for one of the packets which was a bit of a rougher wood and had some that had warped into a slightly oval shape, but that was all perfectly visible in the photo of that listing, so just look closely at the photos and you should be fine.)
They ship from China so it took about a month for the moulds to reach me in Canada (the plague has slowed down shipping times) but it was absolutely worth the wait! Excellent button moulds!! If you need to stock up on button moulds, this is the place that I'd recommend most highly.

WillowRunCrafts - Big wooden discs with nice rounded edges like I used for my coat buttons! They've got a few sizes and they come in bulk. You can get 50 of the big coat button moulds for less than 9 dollars!

FenFenAccessories - You'll have to scroll through pages and pages of other beads to find them all, but they have some little discs and dome shapes.

DIYartworld - Again, pages and pages of other beads, but there are some nice little discs with holes and some domes in there.

For shops like that it's easiest to just scroll through all the beads and favourite any that are button-able so they'll be easy to find again.

smallcommodity - Same as the previous two. Many pages of beads and a few of them are great button moulds.

There are other shops that have suitable button moulds, these are just the ones that appear to have the most at the moment, as far as I've been able to find. I definitely recommend saving lots of moulds to your favourites! It's nice knowing there's a wide variety there that are easy to find again.

I haven't looked around much at craft supply stores that aren't on etsy, but I imagine there are probably some out there that also have good moulds.

Here are all the images I used in the video, with source links. (I'm sorry they're not in order!)


When talking about button mould prices I also included a tiny screenshot from The General Shop Book: Or, the Tradesman's Universal Director, 1753, which is on Google Books.

The small buttons I'm sewing onto the waistcoat at the end are for a version of this printed 1780's waistcoat from Villa Rosemaine. 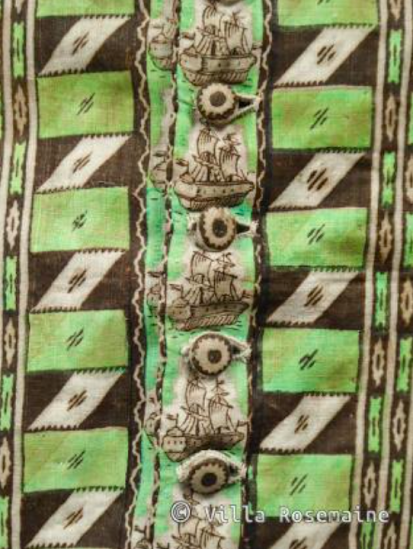 (The fabric for mine was a birthday present, originally from Summer Sun Stories. It came with little ship's wheel button covers but I painted my own covers because I wanted the same buttons as the original.)

Email ThisBlogThis!Share to TwitterShare to FacebookShare to Pinterest
Labels: 18th century, how to, video