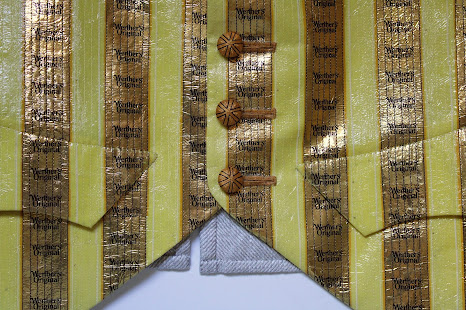 A few years ago I read The Sorrows of Young Werther (1774), and while I didn't particularly like it, I thought it was a neat coincidence that young Werther famously wears a yellow waistcoat, and I though "huh, wouldn't it be funny if I drew a picture of a 1770's man and glued a lot of Werther's wrappers to the waistcoat part of it?".

But then I realized I could actually make a real waistcoat covered with wrappers, which is a terrible idea, but the thought that it would make a funny video is what prompted me to actually do it. Here it is, it's 18 and a half minutes long.

I held off posting pictures of this on social media until it was finished because I think it's best to see it with full context so it makes a bit more sense.

Because this is the first complete sewing project I've filmed, I ended up forgetting to take still photos of most steps, so this post won't have as much information as the video itself.

The fronts of the waistcoat are made of thin pale yellow cotton and the wrappers are fused on with heat n' bond. I did several samples before doing the actual waistcoat.

I saved up a lot of Werther's wrappers over a few months (it took 128 in total), washed them, and ironed them flat on a low setting under an organza press cloth. I wanted the gold stripes to be wider than the yellow ones, so I cut the transparent edges off half the wrappers.

I stuck front and pocket flap shaped pieces of heat n' bond to my yellow cotton and carefully fused each wrapper to it, again using the organza press cloth, and then cut out the fronts and pocket flaps. They were fairly well stuck, but still possible to peel off, so did a lot of lines of machine stitching to secure it. Pale yellow on the pale yellow stripes and dark brown on the gold stripes. 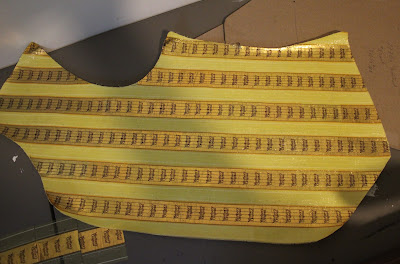 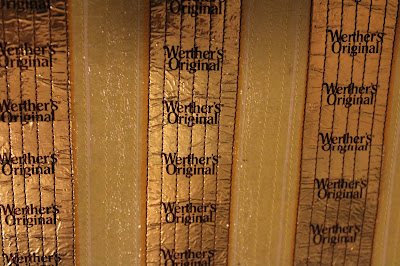 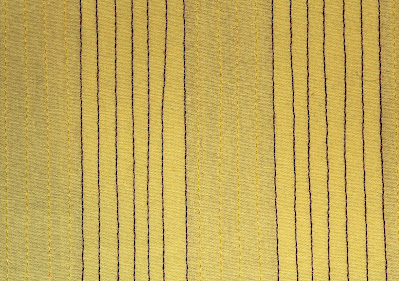 The resulting material was stiff and not very nice to work with. I put very thin buckram in the pocket flaps, much thinner than usual on account of the fabric being so stiff. 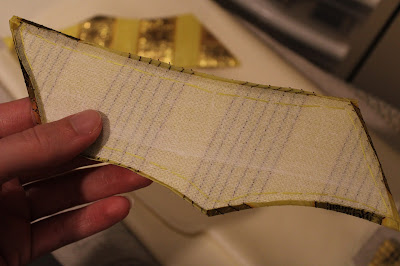 The lining is cream coloured cotton sateen, and the construction methods are mostly the same as I usually use. Aside from all the stitching on the stripes, the only machine seams are the two on the pocket bags.
I go over all the construction in the video but will also link to my 1730's waistcoat post (which is a bit different, and I did the buttonhole linings more nicely) and my brown wool 70's one (which is very similar in construction to this one, except for the fact that the back is lined) if you want to read more. 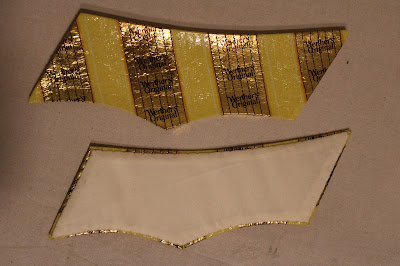 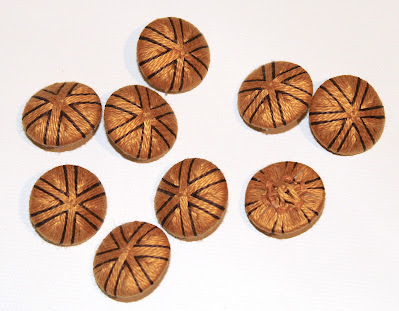 I made death's head buttons in cotton pearl, with yellow to match that little stripe on the wrappers, and dark brown to match the writing on them. 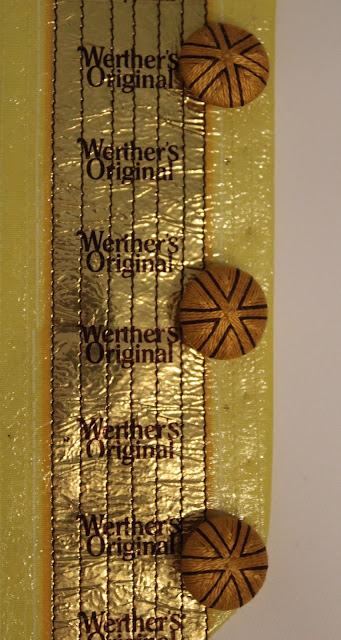 I did the buttonholes in the same yellow, and regrettably decided to do the thing where you line them after sewing them. The cotton sateen lining frayed more than expected and I wish I'd sewn them after lining.
If this were a waistcoat made of nicer materials I'd probably do piecing to line the buttonholes like I did with the 30's one, but I put far too much effort into this already! 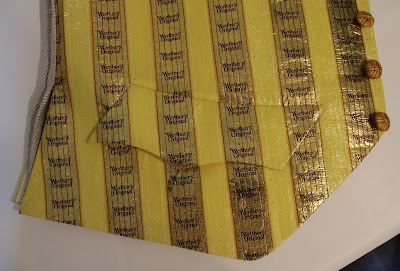 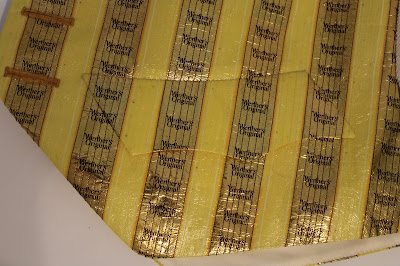 The back is a fairly coarse unbleached linen twill from Pure Linen Envy, and is unlined. The centre back seam is hand stitched and felled with grey linen thread. 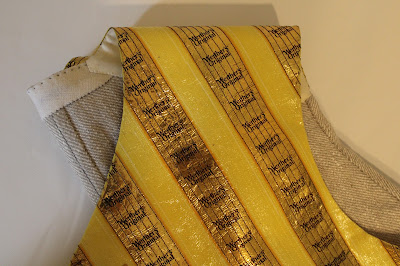 The top of the back is reinforced with a little scrap of medium weight off white linen. 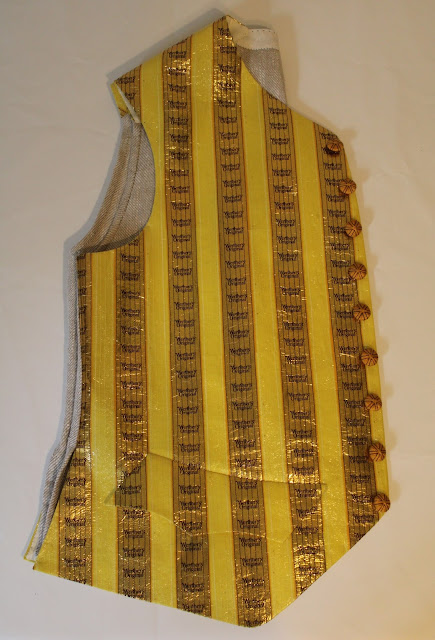 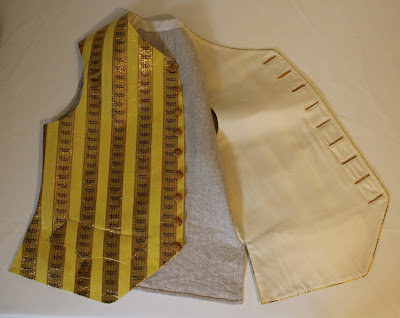 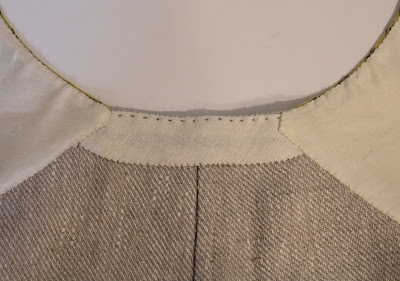 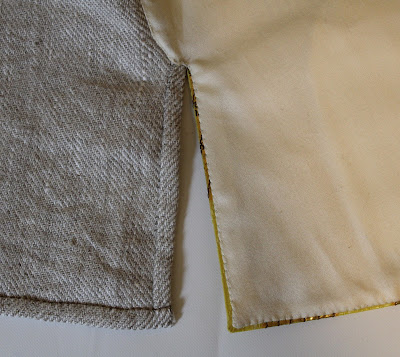 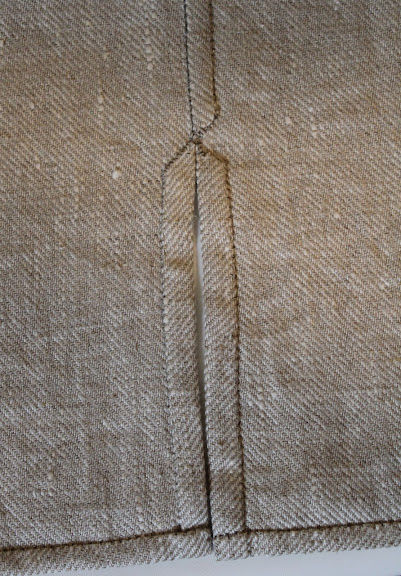 Here are some badly lit pictures of me wearing it. I went to the trouble of powdering my hair for the video, but didn't want to move half my furniture like I did for the 1730's getting dressed video so I'm just in between the sewing table and the big filing cabinet. 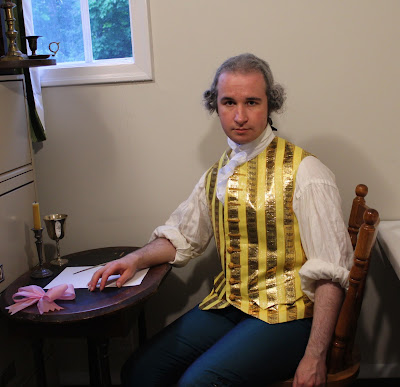 Hopefully someday I will get better photos of me wearing it. For now, I haven't got any 1770's coats to go with it, and 1770's isn't high on my list of priorities, but it's short enough that it could work with an 80's coat.
(The stripes and multicoloured death's head buttons aren't fashionable for the 1770's anyways.) 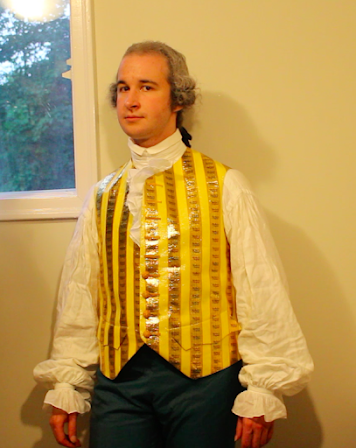 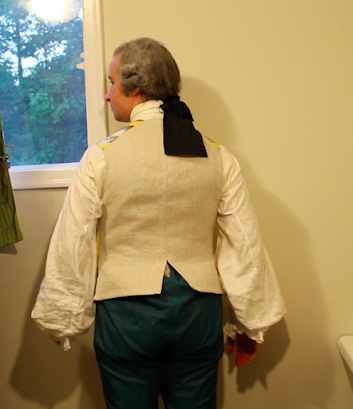 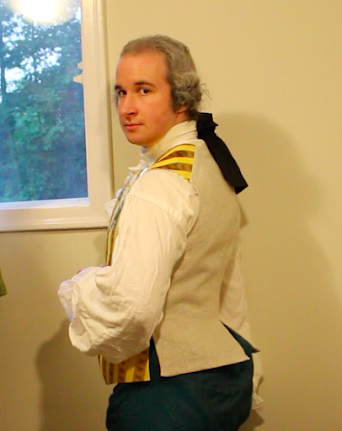 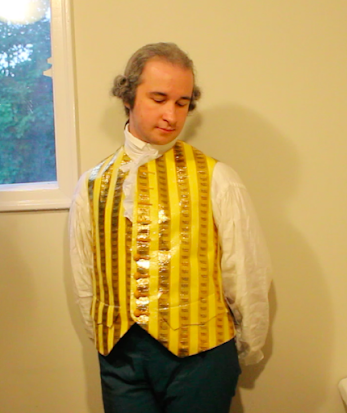 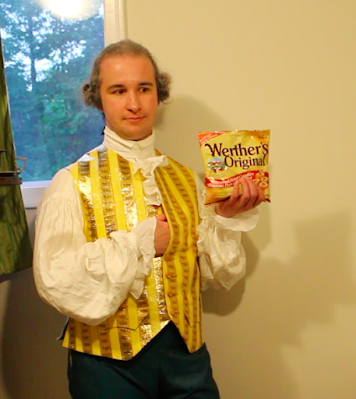 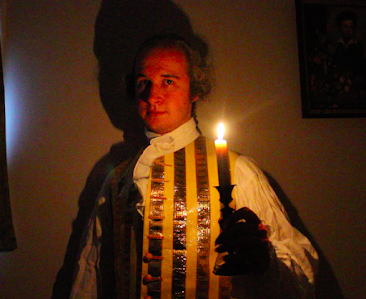 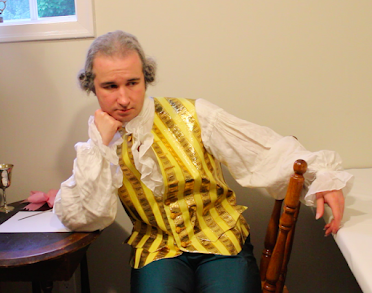 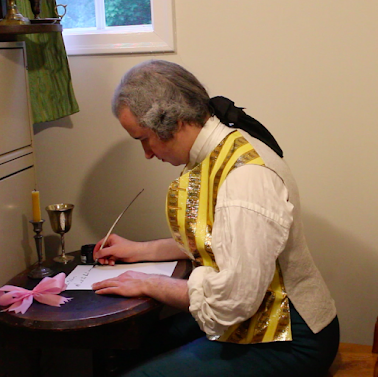 It's a very stiff waistcoat and the gold rubs off the wrappers every time I touch it (I think the heat from the iron weakened the print) so I don't imagine it'll get any actual wear. But I am pleased with it and I think the video was worth the time and effort of making it.