It's rather difficult to find reproduction early 18th century men's shoes as it's not a very popular era, and I haven't got the money for them right now anyways, so I have altered this pair to be a tolerable substitute! 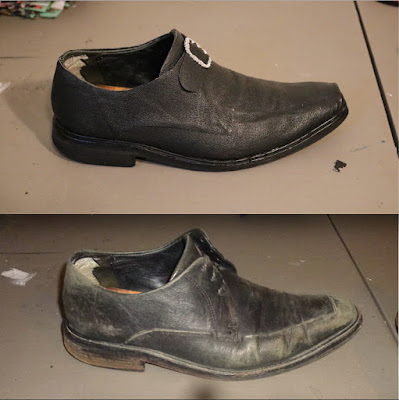 I have some nice late 18th century shoes, but early ones are a totally different shape, and I wanted something closer to that to wear with my 1730's suit. And the 1720's suit I mean to eventually make. (Neal Hurst has an hour long video on 18th century men's footwear if anyone's really interested in learning about all the details of shoes and how they changed over the century.)

My late 18th century shoes have very rounded toes and big buckles, but early ones usually have small buckles, and tend to be chunky looking. Big chunky heels and weird square toes.

I started with a pair of shabby old leather thrift store shoes with somewhat square toes. 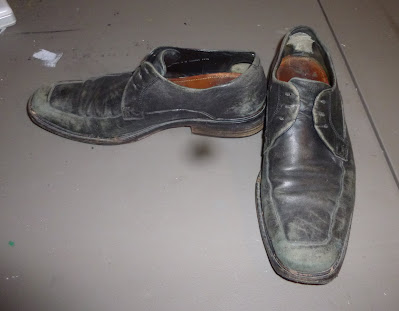 I... actually originally started with a different pair of shoes, but my first attempt failed so badly that it destroyed them. They were an even shabbier pair, with slightly squarer toes, and I made the mistake of taking the sole off. Bad idea! Do not do that if you are attempting to cover a pair of masculine shoes!

The reason I did it was because the only blog posts I could find on altering shoes to look 18th century were about high heeled shoes, and all those ones involve peeling off the sole and then glueing it back on at the end.

But it turns out that different styles of shoes are constructed differently! Those high heeled shoes have a lot of structure and then a thin sole stuck on the bottom, but separating the top from the sole on my shoes left me with a floppy leather shoe top that it was impossible to stretch material over.
But it was ok, I'd worn them a lot and they were in considerably worse shape than this pair, and when I took them apart I even found that the shanks were rusty and one had broken.

Fortunately I had two pairs of scruffy old shoes, and I was more careful with the second one. I started by cutting a bit off the end of the toe and glueing a little scrap of davey board (the dense cardboard you use for covers in bookbinding) to the front. I cut it into the rounded shape you see on early 18th century shoe toes. I also cut a bit off the front of the sole, to make it flatter.

I couldn't make the front bit of the sole any wider, alas, but I built up the toes to be as close to the right shape as I could. I glued on some leather scraps and then some cotton scraps to smooth it out a bit. 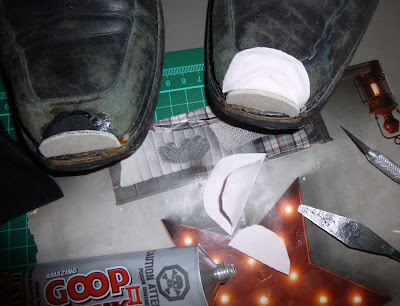 Since taking the sole off is a bad idea, I instead made a little channel around the edge using a linoleum cutter. 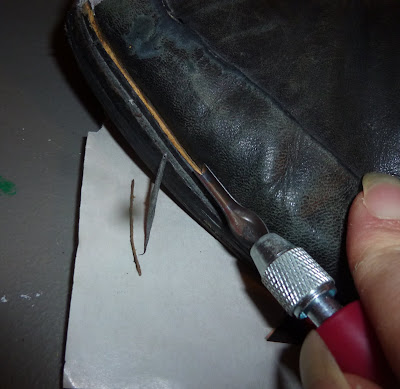 I didn't get pictures of this step, but at this point I trimmed down the tongue to be a bit shorter, and the lacing bits to make them a more suitable shape for narrow latchets. I draped a pattern for the front and back portions using a bit of an old cotton sheet, and cut them out from an old leather coat.
(A different one from the bad and weak leather I made my first pair of gloves out of! This leather seems much more sturdy.) 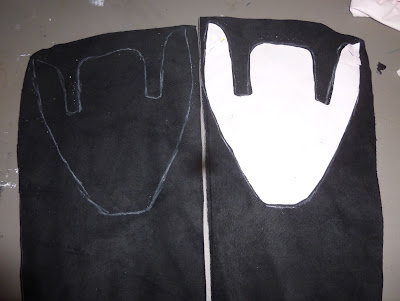 I stuffed the toes with crumpled up paper to help keep their shape, and glued the front pieces on, working in small patches and trying to stretch it smoothly over the shoe. I smeared the adhesive on with a palette knife, and also used the edge of the palette knife to shove the edge of the leather into the groove around the sole as I went. 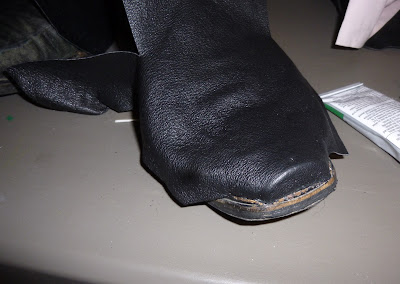 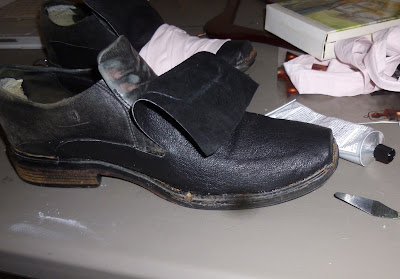 Once the fronts were all glued I tied some long cotton scraps around them and let them dry overnight. 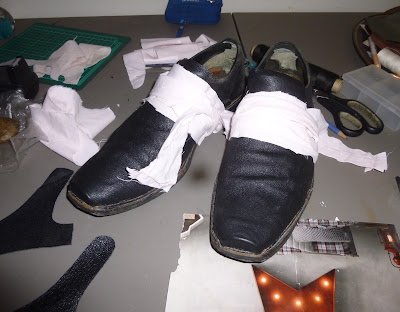 I sewed the centre back seams by machine and glued the seam allowances down flat to keep them pressed open. 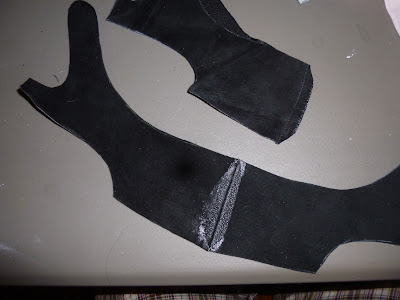 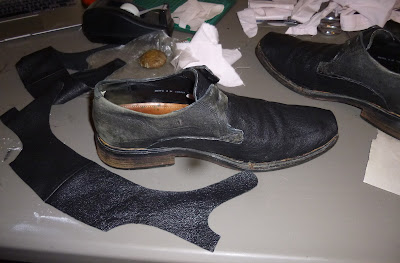 I glued them on the backs just like I did the fronts, working in small patches with a palette knife. I put clothes pins all around the edge to hold the leather in place while the glue dried. 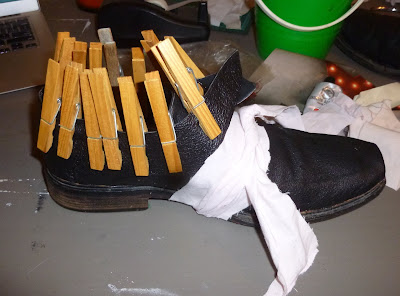 I cut away the top layer of leather on part of the lacing bit before glueing the latchet to it, so it would be a bit less bulky there. 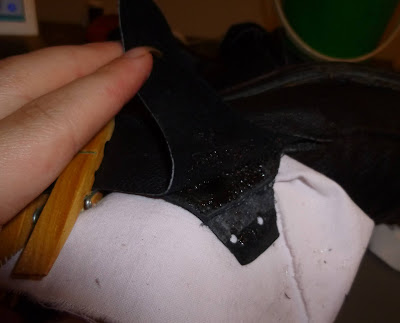 Because the stacked leather soles were worn enough to be more brown than black, and there were some small bits of brown showing where I cut the groove, I gave the edge of the sole a good coating of black leather dye. 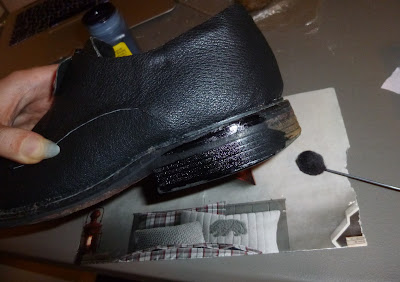 Having waited a day to make sure the glue was fully dried, I trimmed off the extra bit of leather that was sticking up over the back of the shoe. 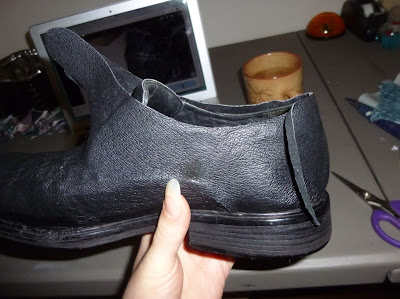 And then I cut little slits in the latchets and added my second pair of breeches buckles to them. (Which, if we're being very picky, are a bit different from shoe buckles in how they attach, but nobody will see that part when it's hidden under the latchet.) 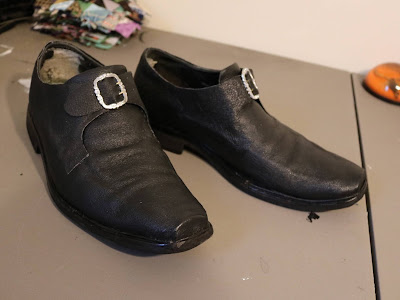 They're not the sturdiest - the adhesive didn't stick things as firmly as I'd expected, and I may go back and add some stitching to reinforce the base of the latchets if they start peeling off, but that's ok. I made these so they'd look decent in photos, and don't expect they'll get a lot of heavy wear, so I'm pleased with how they turned out. 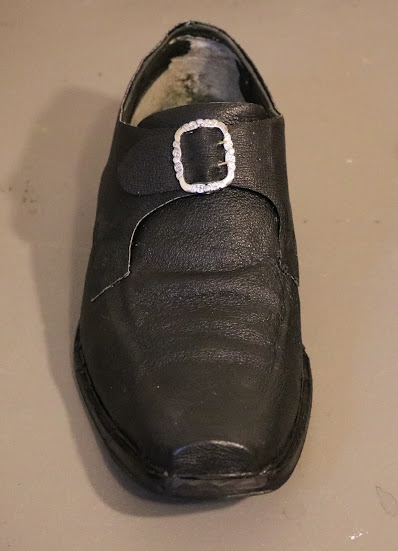 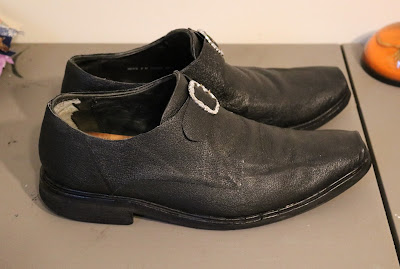