I used to have a couple of sleeveless cotton nightgowns, but they wore out, so this summer I made 3 new ones. One of the ones that wore out is the nightgown I altered and drew monsters on a few years ago (The top part wore out, but I still have the bottom part with the monsters) and the other was a very similar one in thin cotton.

It was ripped in a few places, and I cut it up and traced those pieces to get my pattern. 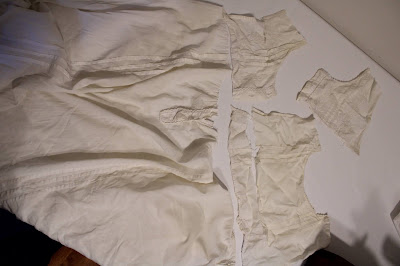 I made a few changes to it after the first time I sewed it up, and here is my final pattern. Two small bodice pieces, cut on the fold, and the skirts are made of one big rectangle about 1m x 2m. (Or two one metre squares if you want)
The crescent shape at the bottom is how much I cut out of the sides of the skirt pieces where the armpit is. The original had a small button placket in front, but I didn't think that was necessary so I just lowered the neckline enough to make it fit over my head.

I sewed up the first one in a white linen which I got on sale from Fabricville years ago. (It's a twill weave, so not really suitable for 18th century shirts.) I did two squares for the skirt, but then realized that was unnecessary and did rectangles with one centre back seam for the next two. I used the thread pulling method to cut the skirt pieces out.
I sewed the side seams and basted the seam allowances down, then machine felled them. 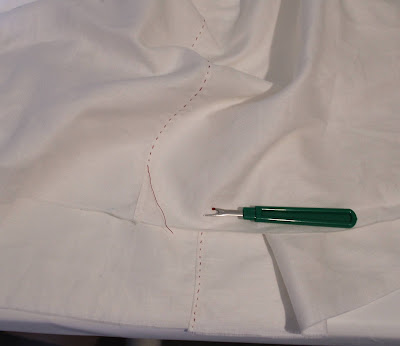 I sewed and felled the shoulder seams and tried the bodice on over my head. It wasn't quite right, so I cut the neckline down a bit. I finished the neck hole with bias binding on the inside. 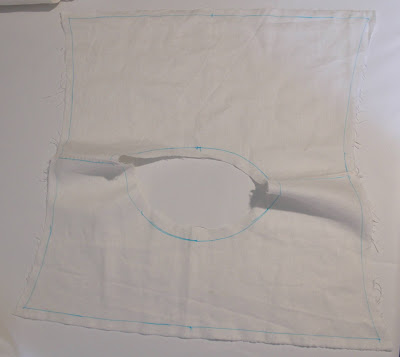 I gathered the skirt pieces to the bodice, leaving a little smooth space by each armpit where I'd cut out the little crescent shape. 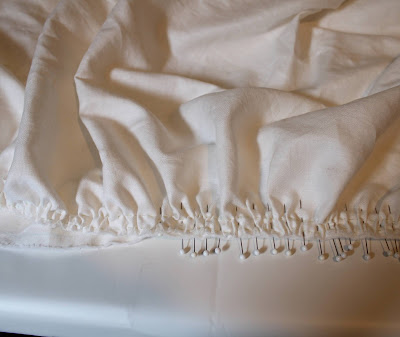 For the first one I cut out an 18 cm long space in the underarm, but this proved to be too big, so I did 14 cm on the next two. 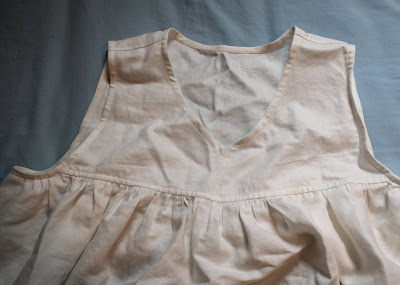 I finished the armhole with bias binding, and tried to fix the too-big armhole by doing some little pleats in there. 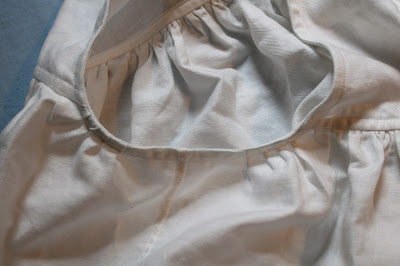 I sewed a narrow hem by machine. 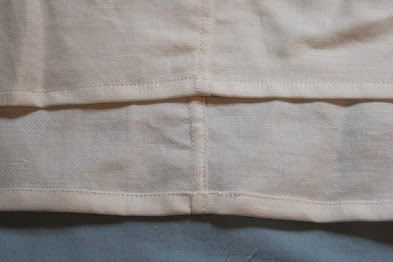 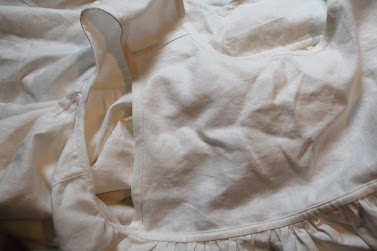 I also put a small dart in the front before binding the neck, but that was just because my pattern wasn't quite right and I needed to take a bit of fullness out of there. 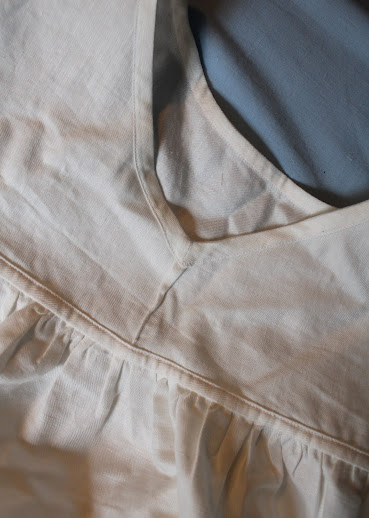 It's quite comfortable, and good in hot weather. 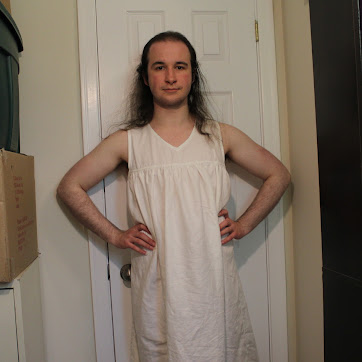 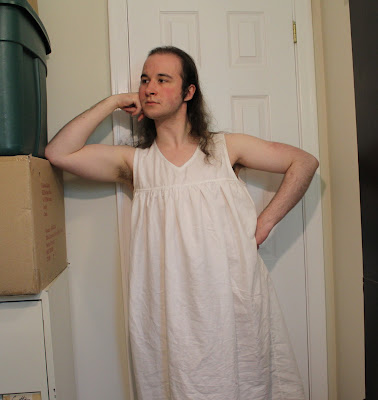 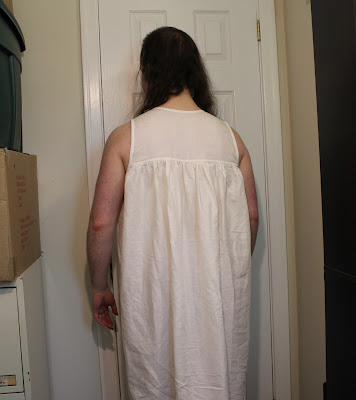 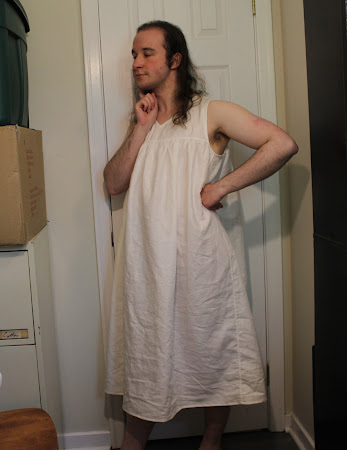 For my second one I used a soft grey rayon, which I got on clearance from fabricville many years ago. I took more progress pictures of this one.
Since the rayon is so shifty I staystitched all the curved edges first.

To finish off the seams where I gathered the skirt to the bodice I cut two long rectangles on the straight grain and sandwiched the gathered skirt edge in between them and the bodice.

And I pressed it up, turned it under, and machine sewed it down.
I then cut out the crescent shapes from the sides and staystitched that, though I realized later it would be more practical to do it before sewing the bodice on. 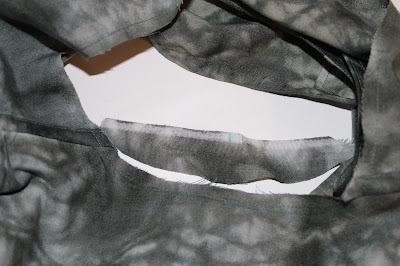 I sewed bias binding around the armholes, pressed and folded it in, basted it in place and machine sewed around the edge, same as the neck hole. 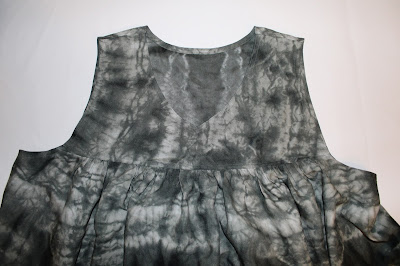 This one is the most comfortable of the 3. I'm sure the linen one will get softer with repeated washings, but I will definitely make more rayon ones. 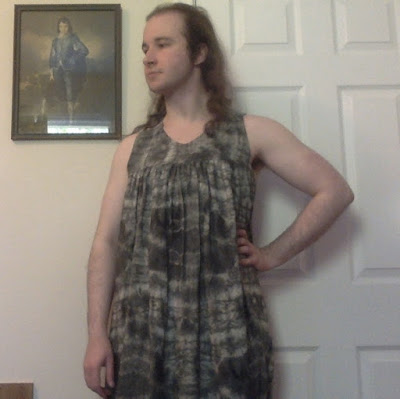 The third one is the least comfortable, being made from a very cheap clearance cotton that has a simple eyelet pattern along one edge 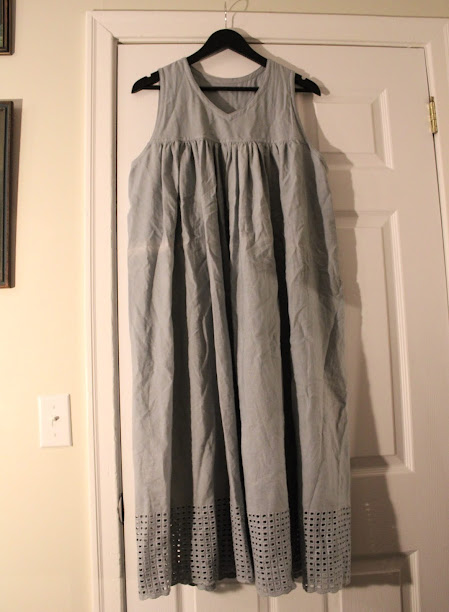 The embroidery is not really scratchy, but it is kind of bumpy.
It's also the exact right height to perfectly snag on the wing nuts on my embroidery frame every time I walk past it, which is quite often since my room is so cramped. Had I know this I would not have bought this fabric!
I tracked my hours for the last one and it took a bit less than 6 hours, but someone faster could probably do it in much less time.
Posted by Vincent Briggs at 08:25

Email ThisBlogThis!Share to TwitterShare to FacebookShare to Pinterest
Labels: at home wear, nightgowns