Early 18th century shirt that closes with a ribbon

I made another hand sewn shirt! 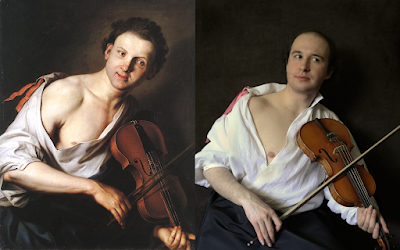 This one's an 18th century style I've wanted to try for quite a long time, where the collar fastens with a ribbon instead of buttons. I have a section with all the examples I've found on my Shirts pinterest board. Usually the wearers are in a partially undressed state, but there are a few more formal ones where the ribbon can be seen peeking out from under a stock. They appear to have been most common in the early to mid 18th century, but there are a few examples from later.

I suspect this evolved from late 17th century styles, when they had those large colourful bows tied in front of their collars. I don't know for sure, since I haven't researched that era, but it looks like the shirts in this portrait and this one are tied with a ribbon in the same way as these later shirts. I have no idea how that worked with the lace cravats they also wore though. 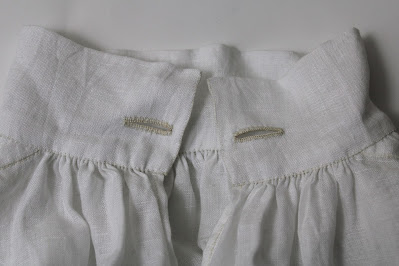 I shan't go into the construction here, since it's pretty much the same as my previous shirt. The only difference is that the collar is shorter because it doesn't overlap as much, and has one buttonhole on each side for the ribbon to go through. 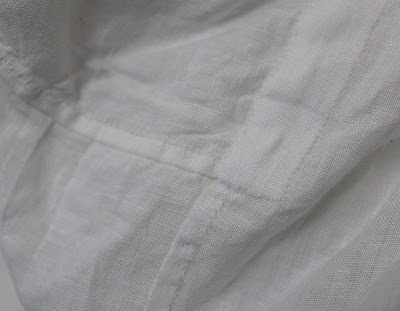 I don't know if the heart shaped shirt reinforcements were a thing this early in the century, but they're sturdy and I like them, so I added one. 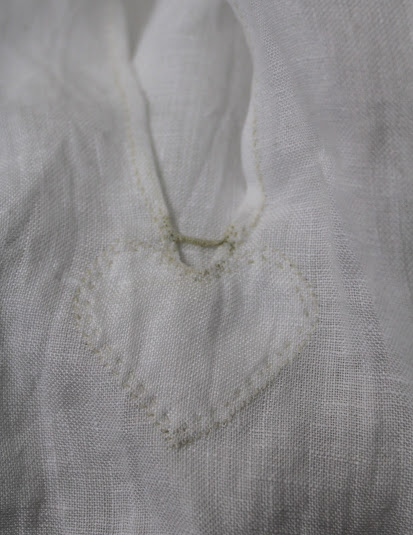 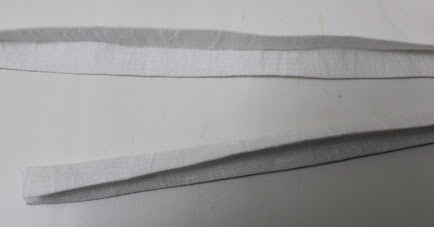 I've found that on some of my shirts the folded edge of the wristbands is very thin and flimsy, so this time I cut them a bit wider and folded them in quarters before attaching them, so the fabric is doubled up all the way through and it fills them out a bit better. 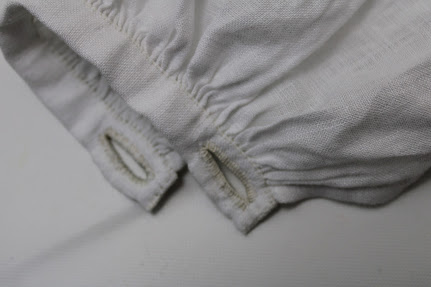 I had a go at recreating this painting, since it's got a shirt and violin and not much else in it.
I think it turned out pretty good (though I know I'm not very good at editing photos). 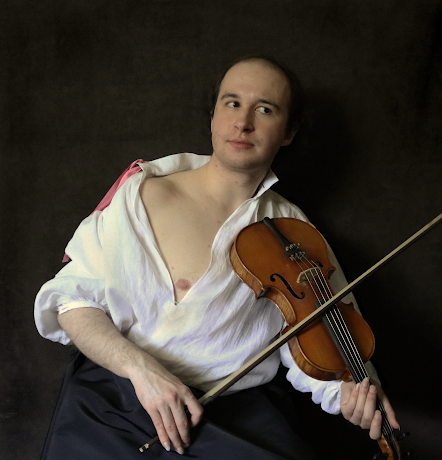 Here are some more shots. I'm wearing it with my green wool 1730's breeches. 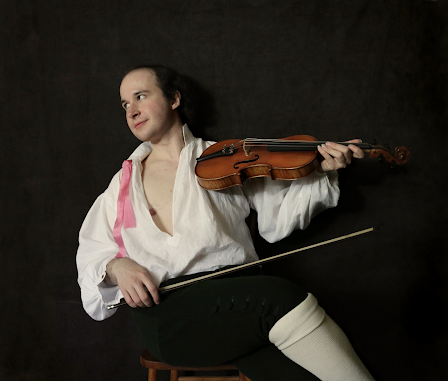 I don't know how to play violin, this is an 1890's one that I borrowed from my parents. 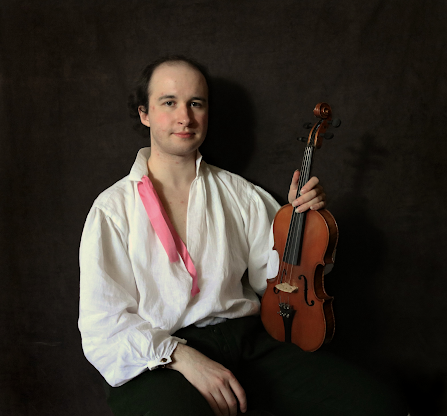 I'm wearing my little brass sleeve links with the pinwheel design on them. 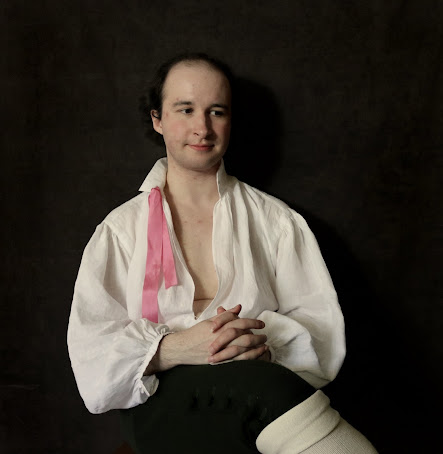 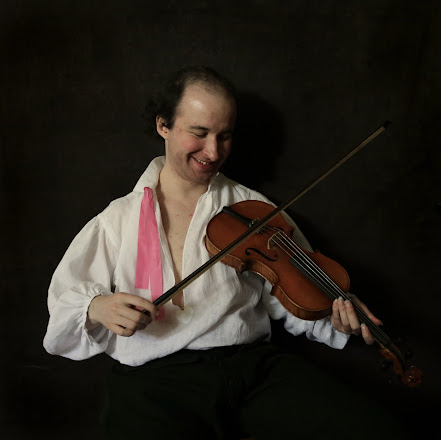 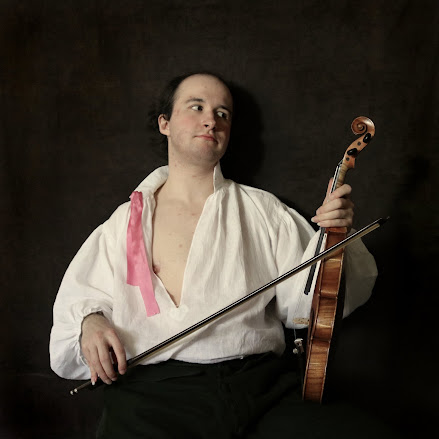 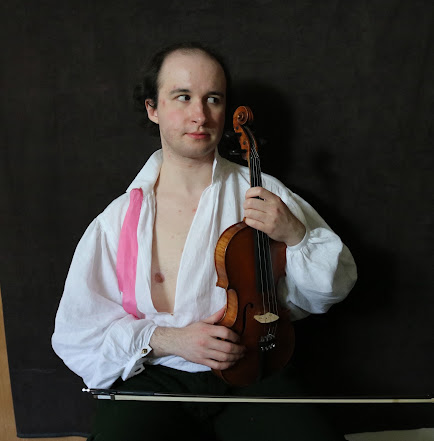 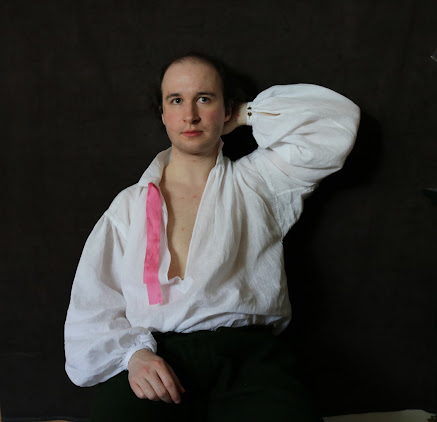 I didn't have a red silk ribbon like the one in the violinist painting, but I did have a pink one, which is one of the colours you sometimes see in other paintings with this style of shirt. 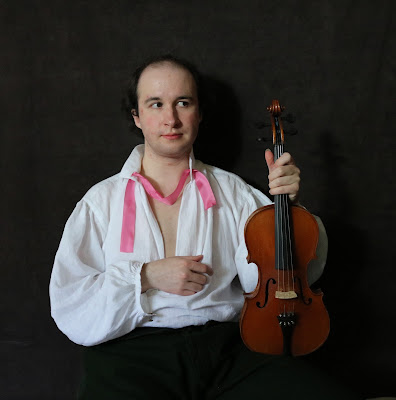 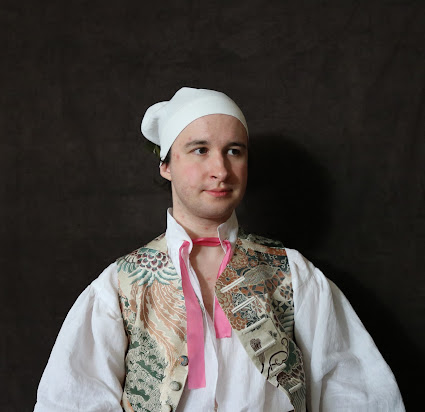 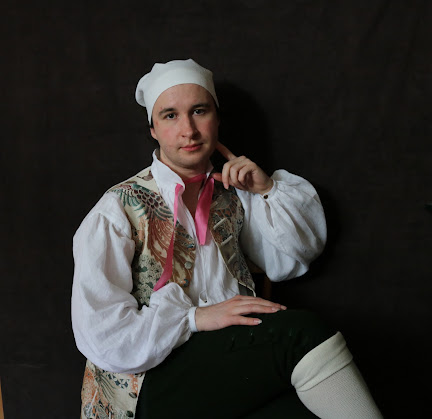 There are also some that show a narrow black ribbon being worn, so I tried that too. 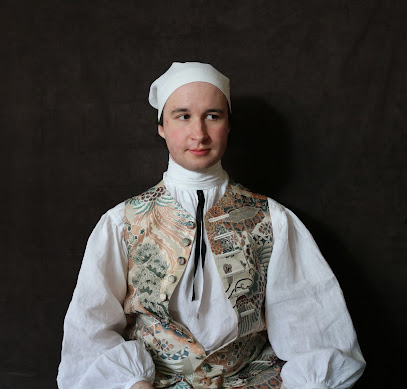 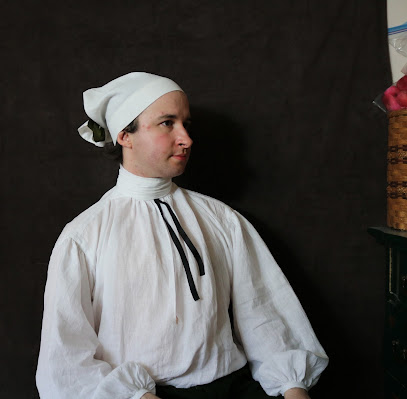 Both under a stock, and untied, since there are portraits of both. 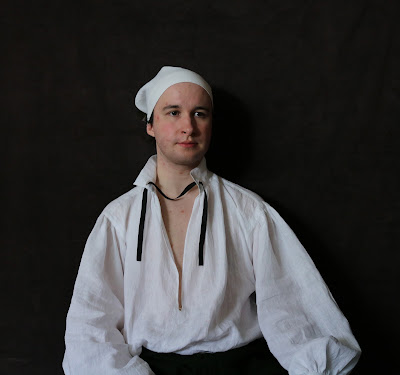 I found that the collar doesn't sit as nicely as buttoned ones do when it's just tied, but when there's a stock over it it stays put just fine. 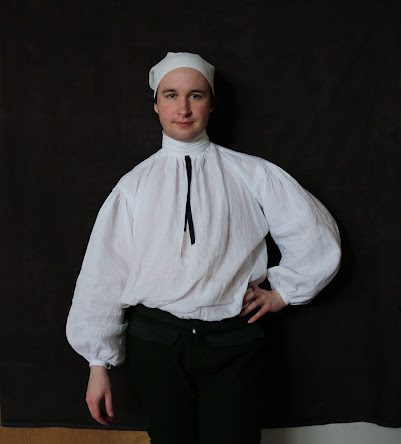 Being all rectangles (and one heart), it qualifies for the Geometry challenge for the Historical Sew Monthly.

What the item is: A man’s shirt.

How it fits the challenge: It’s all rectangles and squares! (Except the little heart shaped reinforcement, which is a square that’s had a little bit trimmed off 3 corners.)

How historically accurate is it? Pretty good! The cut and construction is accurate to the best of my knowledge, and it’s all hand sewn with linen thread. I didn’t add a laundry mark though. I also don’t know for sure if the heart shaped bosom slit reinforcement was around this early, since I’ve only seen examples on a few late 18th century extant shirts, and earlier shirts are even more rare and there aren’t many pictures of them to be found.

Hours to complete: I neglected to keep a time sheet, but probably 30-something. 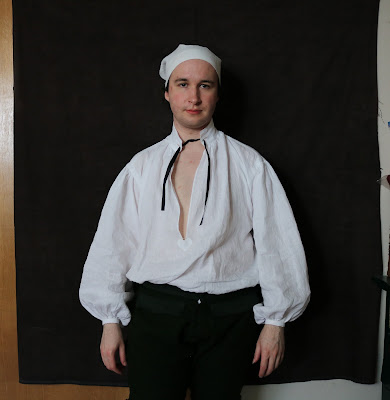 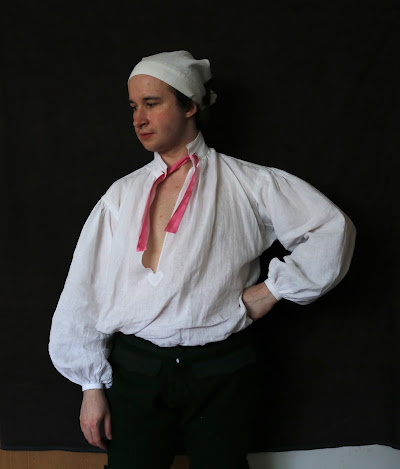 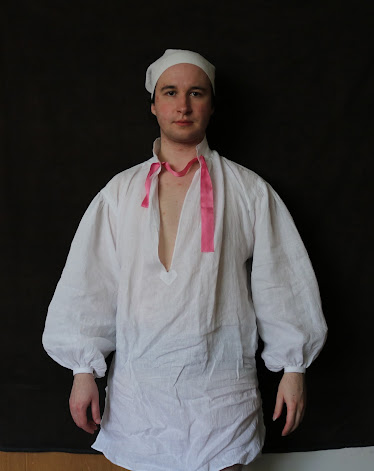 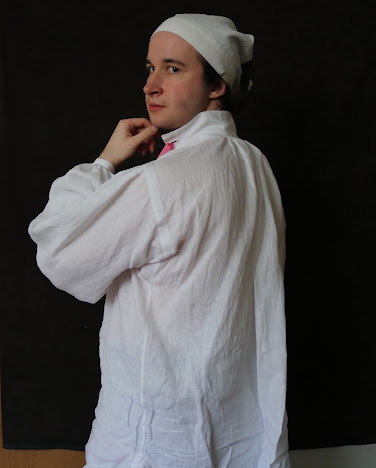 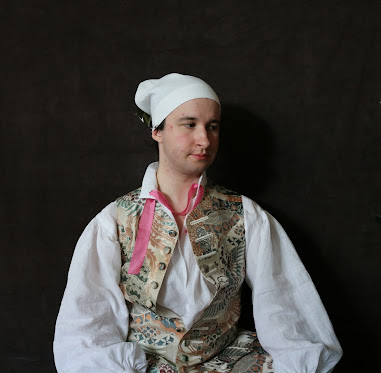 And that's it! I've got a couple more shirts in progress that are machine sewn coloured linen ones for everyday wear, and I'm thinking I ought to machine sew some white ones too, so I don't wear out my hand sewn ones too quickly.