Hello! I'm going to make my own version of the iconic bird printed velvet robe from episodes 7, 8, and 10 of Our Flag Means Death. I'm not going to do it in the same colours, but I do want to keep the cut as screen accurate as I can.
I've made a mockup, and have drawn out my pattern diagram, which I hope will be helpful to other people who are also looking to make this robe.

It doesn't have much in common with 18th century wrappers, unlike the yellow one Stede wears in earlier episodes, but this isn't the post to get into historical accuracy so I shan't.
(I've got a very long guest post on the show's costumes over on Frock Flicks. Part 1 is here and part 2 is here.)

The robe is fabulous and I think it works very well for the show!

It's made of a printed cotton velvet (not silk, as Izzy mistakenly called it) and there are a number of online shops that carry the exact same design. Handicraft Palace has it on their website, as well as on ebay, and is the company the show's costumers got the fabric from.

It should be noted that their 3 yard listing is much cheaper than 3 individual yards, so even though the robe only requires about 4 and a half (unless you want to do pattern matching) it's more economical to just get 6 using the 3 yard option if you're buying from this seller.

All these places have it in a variety of other colours besides pink, and I've ordered the dark purple version for my version of the robe. Edit: My purple velvet arrived and is NOT dark at all, it's a very different shade of purple from the photos, so I'm going to overdye it. Ian Snow has almost the exact same print but with the large flowers in yellow instead of red.

I've been told that the way it looks in the show is more accurate to how it looks in person than the extremely bright hot pink it is on the website's photos. And that it sheds a lot of fuzz in the wash. I'll be sure to serge the edges of all my pieces before sewing, even though it'll be fully lined. I don't want any internal fraying to fill the hem up with lint.

If you're looking for a more budget friendly option, or dislike velvet, Theblockprints and Handicraft Palace both carry the same pattern printed on a smooth plain weave cotton. 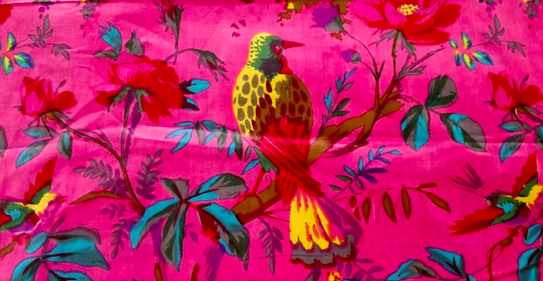 Hannahgreenecostumes and heathervanderstitch on instagram, who worked on the costumes, have both posted about the robe and here's what they said about it in the captions and comments:

"Lining is a fuchsia matka from Sai Silks in NYC with vintage tassels from @westerncostumecompany."

"I started with a traditional kimono pattern draft and added a box pleat at the back neck because costume designer Christine Wada wanted more movement around the feet, but not be too baggy on the shoulders. I also had to add shoulder seams to keep the birds facing up."

"I don't think it had any beading, I'm almost sure it was a thread tassel."

"The piping is actually a bright orange dupioni and the lining is fuchsia. Initially the robe lining and piping were all going to be either the fuchsia or the orange, but when we did stitching samples to determine the size of the piping, the fuchsia didn't pop well against the fabric. The orange however wasn't as cohesive with the outer fabric, so we used both.

"@shizenbeauty did a great job of getting that exact 1/8th" piping! I swooped in at the end and stitched on those great tassels."

I'll be using different fabrics for the lining and piping on my robe, but if you're looking for orange dupioni Pure Silks has a lot of it, and Silk Baron has some too. (Those are just two of many many places though, dupioni is pretty common.)
After having had a quick look at some sites, the pink silk matka I've come across has been awfully expensive, especially for the rather coarse texture it is. Personally I'd want something more slippery for a lining, like satin, or perhaps taffeta (which is maybe too crisp for the lining of something so drapey, but will soften up if you wash it).
There are definitely lots more pink lining fabrics out there, but I haven't looked very hard because I'm not looking to buy any, and this post is more about the patterning.
As far as I'm aware, the piping is in between the neck binding/collar thing and the robe body, and nowhere else.
I think there might be a bit of interfacing in the neck binding. Edit: Yes, there's definitely some interfacing in there, the velvet is too soft to sit like that on its own. I'm certain there's none anywhere else though. We don't get any good clear shots of the upper back in the show, but you can kind of see the pleat here. They've done some pattern matching, and you can see the two red flowers are in the same place on the neck binding. Not many good views of the tassels, but you can sort of see them in a few shots when Ed is wearing the robe. 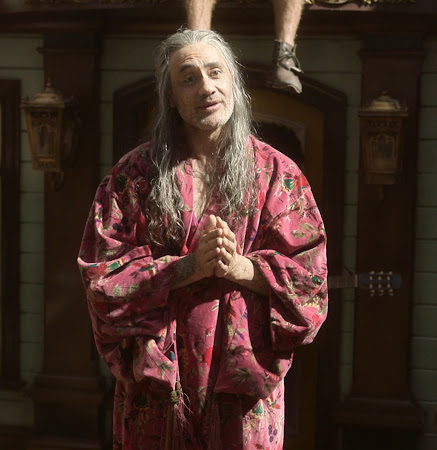 The tassels appear to be made partly of threads in the same shade of pink, with a cap of what looks like a dull tarnished metallic gold, or maybe just brown. There are some threads of the same gold/brown colour around the outside of the pink tassel centre. The robe itself is quite long and loose fitting, with kimono sleeves, as Heather talked about in the instagram post. 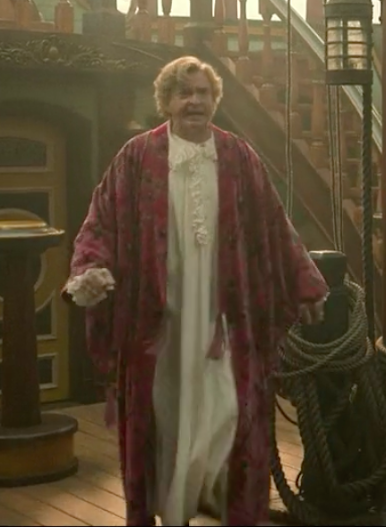 One of the most helpful photos has been this one of it laid out on a table!
You can see from the placement of the pattern relative to the edges that the sides of the front and back are cut straight up and down, while the front edge tapers. Here's the same picture with the front piece roughly traced in yellow, and a green line going straight along the grain through the same fabric motifs. 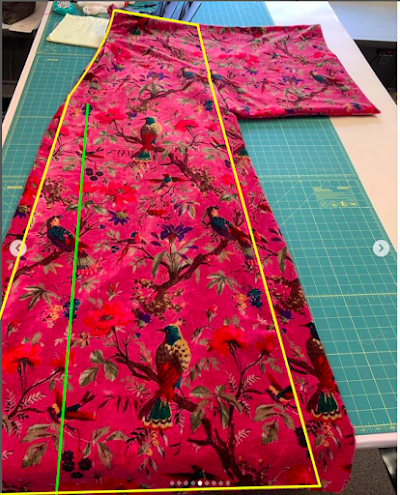 I made my wearable mockup out of a burgundy rayon from my stash, which is of course much thinner than the velvet, but I think it did a decent job all the same. 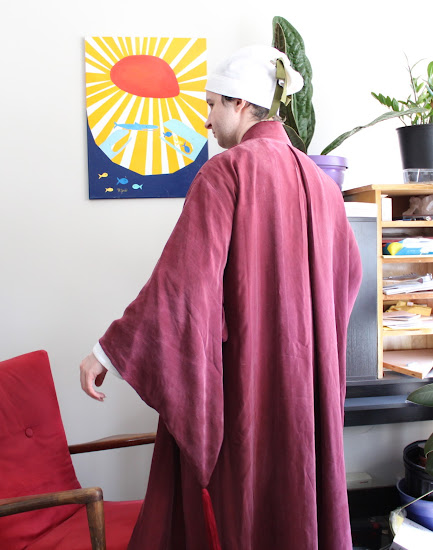 Comparing it to the original, the one big difference was that my neck binding was about 3" too short. The 9" tassels I used ended at just the right level though, which means that for the final robe I'll do 6" ones. 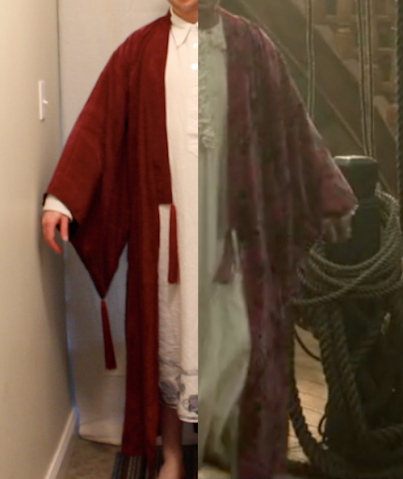 After adding the extra length and accounting for seam allowances, and the necessary seams at the top of the sleeves and CB of the neck binding to account for the nap of velvet, here's roughly what my pattern looks like: 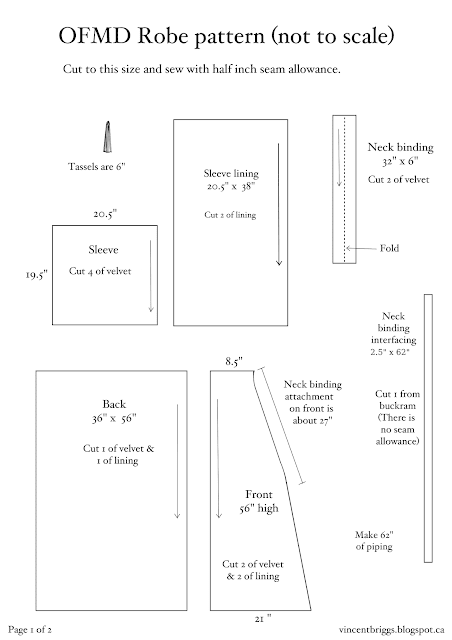 Sorry about the inches. I'm from a Metric country and usually prefer centimetres, but sometimes inches are more convenient for large measurements that don't need to be super precise. 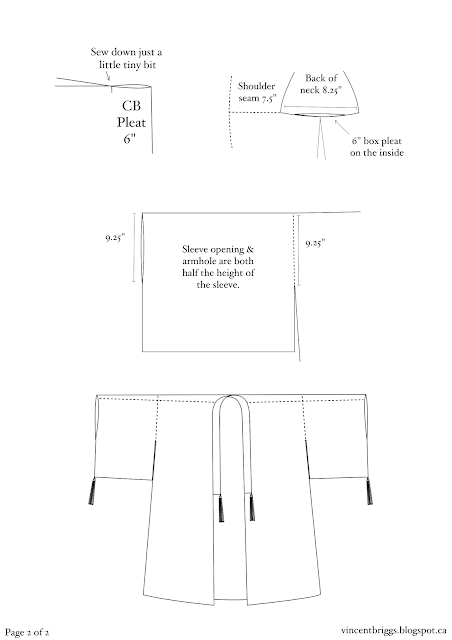 My hem was very uneven when I first sewed everything together, and part of that was because it was wibbly wobbly rayon, but I do expect to have to hang up the velvet robe and trim the bottom to be more even before finishing it too. I'll baste the lining and outer layer together to make sure they stay put while doing that.
There's not much to say about the construction of the mockup, it's unlined and all the inside seam allowances are serged. I put some fusible interfacing in the neck binding. I keep calling it a binding, but really it's sewn on much like a collar and isn't binding anything.
The tassels are made from a burgundy rayon fringe, which has been in my stash for quite a while, just like the fabric. I cut 4 identical little lengths and just rolled them up and stitched them together at the top.
I know a mockup probably doesn't need tassels, but they do affect the drape, and this is a very fast and easy way to make them.
Making tassels out of thread or yarn is pretty easy too, but a lot of it is too stiff and tangles easily, and this fringe has a much nicer weight and swoosh to it. I haven't decided what I'll use for the ones on my final robe. 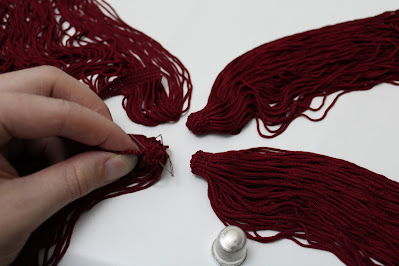 I will post about the construction of the actual robe, once my velvet arrives and I sew it up!
Posted by Vincent Briggs at 16:50